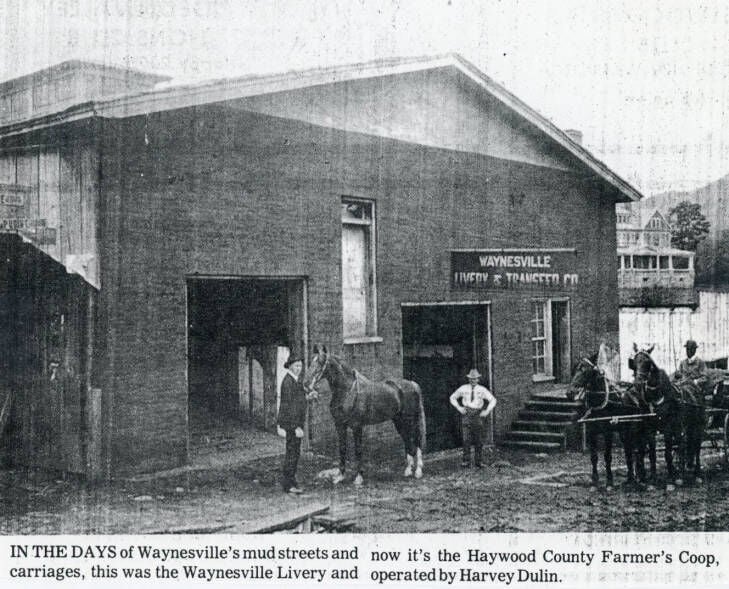 BUDDING INDUSTRY — The Waynesville Livery and Transfer Co. served multiple purposes in Waynesville, from renting out horses and buggies to moving furniture and manure. 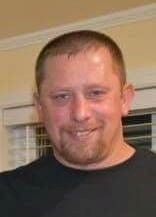 HISTORY BUFF — Charles “Bit” Putnam loaned the ledger found by his father to the Haywood County Historical Society so it could be preserved digitally. 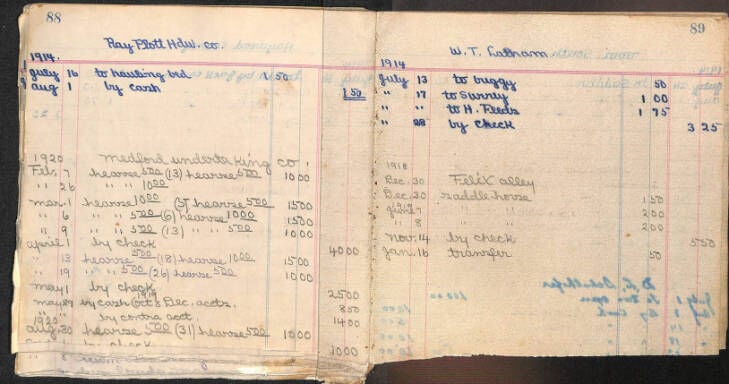 LIVING HISTORY — A page from the Waynesville Livery ledger. Note the multiple entries for Mrs. Dolan. Note also how the bottom half of the pages are used for another series of entries. 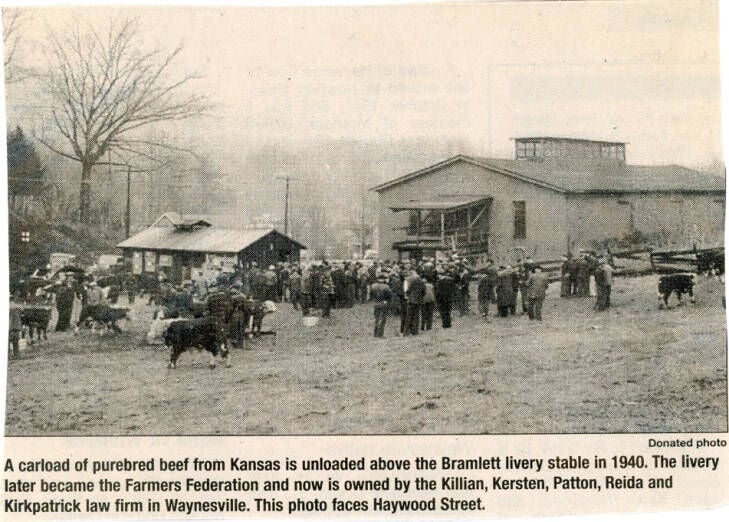 CROP CUTLINE OUT OF PHOTO

USE THIS CAPTION INSTEAD

1940s LIFE — A carload of purebred beef from Kansas City is unloaded above the Bramlett livery stable in 1940.

BUDDING INDUSTRY — The Waynesville Livery and Transfer Co. served multiple purposes in Waynesville, from renting out horses and buggies to moving furniture and manure.

HISTORY BUFF — Charles “Bit” Putnam loaned the ledger found by his father to the Haywood County Historical Society so it could be preserved digitally.

LIVING HISTORY — A page from the Waynesville Livery ledger. Note the multiple entries for Mrs. Dolan. Note also how the bottom half of the pages are used for another series of entries.

CROP CUTLINE OUT OF PHOTO

USE THIS CAPTION INSTEAD

1940s LIFE — A carload of purebred beef from Kansas City is unloaded above the Bramlett livery stable in 1940.

This is the story of a fragment of history, lost under one of Waynesville’s oldest downtown buildings for more than half a century. That relic, a ledger of the Hyatt and Bramlett livery stable, reflects the transition from horses to automobiles and hints at details in the lives of Waynesville’s leading citizens. But there is another tale, too, in the pages of that ledger, about a man who recognized that the fragmented and dirty sheaf of papers was something worth keeping.

The ledger includes handwritten entries from 1914 through 1920 from the Waynesville Livery Company, owned by W.A. Hyatt and L.H. Bramlett. The names of prominent leaders — Stringfield, Barber, Hyatt, Howell, Alley and more — join the names of summer residents in the entries. It is a reflection of the austerity of the owners that the top half of each page is a record of the years 1914 through 1917, with the later years taking up the bottom half of the pages, as if the book were reused to save the expense of a new one.

The building at the corner of Haywood and Depot streets now houses offices, but was constructed in 1883 or 1884 as a tobacco warehouse, according to Waynesville historian Alex McKay. Old Mountaineer newspapers report that J.P. Swift operated a livery there, followed by J.L. Stringfield, then B.J. Sloan, who leased and later sold the site to Hyatt and Bramlett. Later, brothers L.H. and Toll Bramlett purchased full interest in the business.

The Bramletts capitalized on the growing popularity of Waynesville and its surrounding ridges as a tourist destination. Like Swift, who later operated another stable, they would send horses, buggies and drivers to the Waynesville Depot ahead of scheduled passenger trains, offering to take new arrivals to the White Sulphur Springs, the Eagles Nest Hotel or boarding houses in the region. The Bramletts also offered scheduled wagon and automobile runs between town and local hotels, a cross between a bus and taxi service. The livery would rent out horses and buggies or wagons to individuals for the day, catering to the summer residents who had limited means of transportation.

The Bramletts also were clever enough to realize they were in the transportation business, not just the horse business. By 1914, visitors could lease an automobile for a day. Because the times of the rentals weren’t listed, it is hard to fix on a specific rate, but charges ranged from $2 to $6. Margaret Stringfield, one of the first women in Waynesville to drive an automobile, rented a car from the Bramletts, according to the ledger.

By the 1940s, tourists were arriving in their own automobiles or by bus, and the livery business closed. The Bramlett family leased the building to a farmers’ cooperative, managed by Harvey Dulan from 1947 to its closing in 1981. In 1988, a group of investors, including several local lawyers, purchased the property and had it renovated.

Charles Putnam Sr., a truck driver and man of many trades, was helping with the renovation when he spotted something that looked like trash. As his son later told the story, the elder senior found the ledger, down in the dirt under the floor, where the horses had once been stabled.

It was ragged, the cover gone, threads disintegrating at the spine. Water had dissolved some of the pages, particularly the bottom portion of the back. But many of the entries in the ledger were still clear, 70 years after they had been written.

Charles kept the ledger. He was proud of the find, recognizing it as something of historical value. And when he died in 2015 at the relatively young age of 68, he left the ledger with his son, Charles “Bit” Putnam Jr.

The junior Putnam treasured that ledger. His father had been a ferociously hard worker, he said, but hadn’t been able to leave his family a lot of money. But he did leave them a fragment of history, rescued from the dirt and darkness under the floor. The younger Putnam loaned the journal to the Haywood County Library and the Haywood County Historical Society, in memory of his father, so it could be copied for others to study. There it can be found, in the historical digital collection, where it can be perused, page by page.

It has a lot to tell, though much of it is, like the pages itself, in fragments.

While tourism provided much of the livery’s income, this ledger seems dedicated primarily to the other types of business, which ranged from renting work-horse teams to delivering ice cream. In May of 1914, for example, the stable was paid $8.50 to relocate a sawmill for Hyatt and Co. And Howell Lumber Company periodically paid the livery stable to deliver a load of potatoes — presumably to feed its work force at a lumber camp.

The livery also would haul loads of manure — presumably much of it generated at its own stables, though that is not specified — to local farms. The biggest manure customer listed was R.N. Barber Sr., founder of Barber’s orchard, who, in 1920, would have the livery hauling as many as five loads of manure a day to nourish his young apple trees.

On occasion, the livery went into the moving business. In 1914, for example, Mrs. Moore, (first name not given) moved three loads of furniture using the livery equipment and paid $2.25 for the service.

The ledger shows the Bramlett company to be a multi-faceted “trucking company” for its day. Almost any task that required transportation was filled by the company during the period. In 1920, for example, the Medford Undertaking company paid the stable $5 after using its teams for a hearse service. Other commercial customers included Waynesville Grocery Company and the N.C. Oil Company.

In 1920, J.M. Lord hired two horse teams to move goods to the Big Ridge Mine for $20. In July of 1920, D.L. Shulhofer apparently purchased two oxen from the livery company, for he is recorded as paying $100.

In 1914, the livery also picked up another source of revenue, hauling lumber to the new Methodist Assembly at Lake Junaluska. The next year, the company was also providing horse feed and work horse teams to Champion Fibre Company in Canton.

A woman on the go

There are other details that only hint at stories. Take Mrs. Dolan.

From the ledger, we know very little about Mrs. Dolan, except that she liked to be on the move. Many women are listed in the ledger, most of them renting a horse and buggy for a day. And most of those women made such a rental about once a week, perhaps once every 10 days. Those women would average eight or 10 rentals in a summer. Not Mrs. Dolan. In the summer of 1917, for example, she rented a horse and buggy every three to four days for a total of 25 rentals. She did the same in 1918 and 1919. One might assume she was a summer resident, given that her excursions seemed limited to summer and early fall months. But in March and September of 1918, she also purchased multiple loads of manure. If she were a summer resident, we would hope she was also a property owner.

In 1914, one Willie Mehaffey rented two short surreys and one three-seater buggy for a funeral. Hints of a tragedy and quite a showing for someone’s sendoff, but no more.

There they are, pieces of life, names that might confirm a presence in Waynesville at a certain place and time. The entries might give a clue to the date of a building’s construction or fill in the detail of a family story. All because Charles Putnam recognized the value of a tattered, dirty notebook lying in the dirt, and because a younger Charlie Putnam made sure it was copied and shared.

Like his father, Charlie Putnam, Jr., died young, unexpectedly in 2018 at age of 46 of heart failure. But thanks to their appreciation of old things, Charlie Jr.s’ two sons can take pride that their family recognized, rescued and shared a precious piece of history.

There’s another reminder here, too, about first appearances — how something tattered, dirty and frazzled may conceal hidden treasurers.

It’s a reminder that applies to relics of the past, often carelessly discarded. Those old photos, scrapbooks, journals or newspaper clippings heading toward the trash — in them may lurk another treasure, ready to come to light.