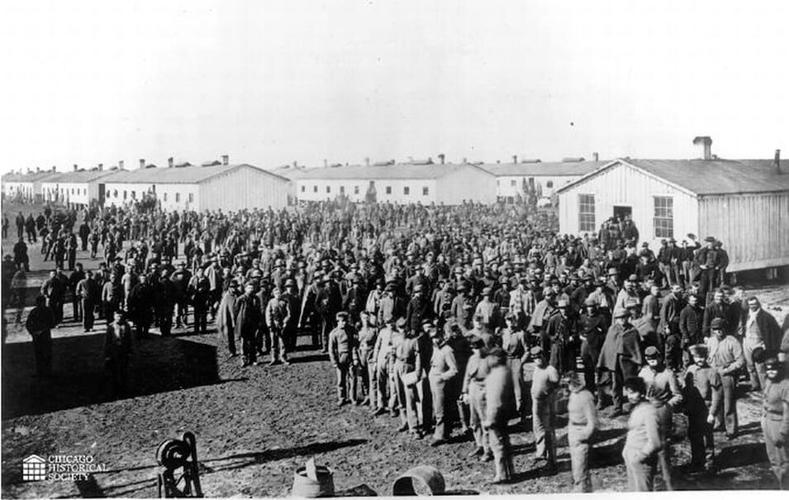 An overview of Camp Douglas. 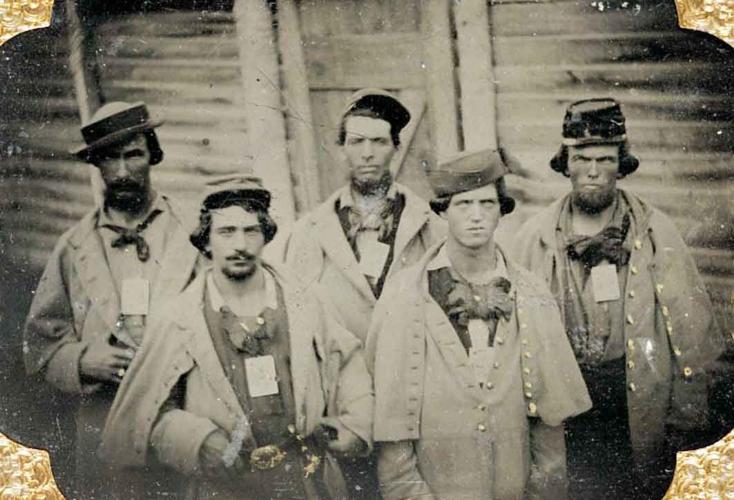 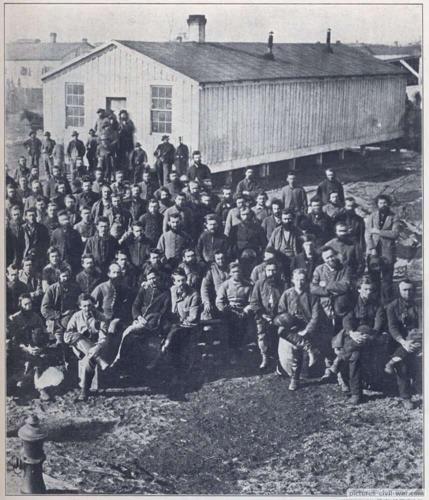 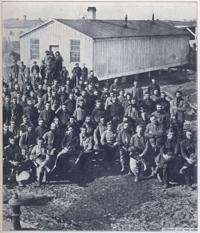 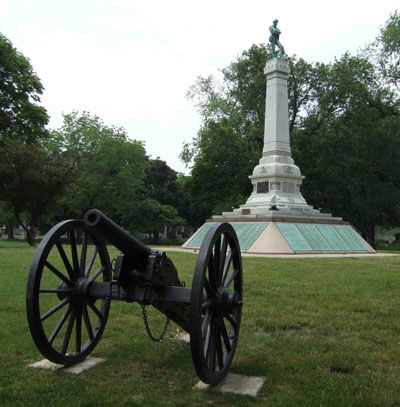 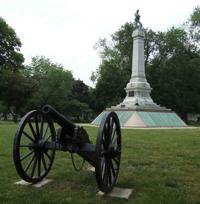 The Confederate Mound at Oak Woods Cemetery commemorates the more than 4,000 prisoners who died at Camp Douglas.

An overview of Camp Douglas.

The Confederate Mound at Oak Woods Cemetery commemorates the more than 4,000 prisoners who died at Camp Douglas.

Men of the Confederacy’s N.C. 62nd Infantry wept when they learned they were to surrender to Union Forces at Cumberland Gap without a fight in September 1863. They may have wept even more had they imagined what they would face as prisoners of war.

About 180 members of the 62nd escaped capture under Confederate Brig. Gen. John Frazer’s surrender that Sept. 9. But another 442 were among the 2,100 Confederate forces given over sent to Camp Douglas, Illinois, a Union prison camp.

There, odds of survival were much worse than on the battlefield. Forty-four percent of those 442 men died at Douglas, including 76 men from Haywood County. The 62nd Infantry, made of up men from Haywood and other Western North Carolina Counties, had been guarding Cumberland Gap from Union forces when Frazer agreed to the surrender.

In all, the 62nd lost at least 196 men in the prison camp. A few prisoners had also been transferred to Rock Island, Illinois, and one member of the 62nd died there.

Camp Douglas has sometimes been called the “Andersonville of the North,” comparing it to the Confederate’s prison camp in Georgia where a third of the Union prisoners died, many of starvation. Conditions were horrific at Camp Douglas, though the deaths came not so much from starvation as disease, including a smallpox epidemic, as well as exposure.

The overall death rate at Camp Douglas has been estimated at about 17 percent — though some historians have argued that poor records mask a death rate that was actually much higher. Andersonville’s death rate was 28 percent. Little evidence is given or reported as to why the Western North Carolina men died at a rate so much greater than the norm.

The reality is that the hellish conditions created at these and other Civil War prison camps can be traced beyond the camp commanders to decisions made at high levels of government. In the early years of the Civil War, North and South would engage in prisoner exchanges, which limited overcrowding in prison camps. But both sides made crucial decisions that guaranteed prolonged suffering and death for their soldiers.

In the South, leaders refused to recognize captured African American Union soldiers as prisoners of war and instead murdered them or treated them as slaves.

President Abraham Lincoln ordered a halt to exchanges until the South would recognize the rights of those prisoners. When the South eventually offered to exchange African American prisoners, Gen. Ulysses Grant declined, because the terms of the release would have freed far more Confederates than Union soldiers.

The breakdowns in policy made in official meetings came to reality in overcrowded camps both North and South, camps rife with dysentery and smallpox, where starving men ate the vomit of their comrades, and corpses of men who died either of starvation or exposure were buried in mass graves.

Camp Douglas, a site with such strong ties to Haywood County families, was a Union training ground early in the Civil War, named for Illinois statesman Stephen Douglas.

In 1862, when the Union Army was faced with the capture of 15,000 Confederates after the battles of Fort Henry and Fort Donaldson, the Douglas training ground was converted into a prisoner of war camp, with the first group arriving in February of that year. The grounds were flat, with poor drainage and bitter winds from Lake Michigan created a breeding ground for disease.

No floors, no heat

When the 62nd’s soldiers arrived at Camp Douglas in September of 1863, a sewer system had just been constructed, but food rations had been cut. Eventually vegetables were eliminated, which meant that scurvy was rampant. In retaliation for prison escape attempts, stoves were removed from the barracks. So were the floors, to prevent tunneling.

Prisoners were allowed to write home, but descriptions of the horrors they witnessed rarely were included, likely because letters were censored, possibly, too, because the prisoners did not want to further distress their suffering families.

One such letter, written by Haywood County native John Dyer, is reprinted on several historical websites dedicated to the 62nd.

“Dear Friends,” it reads. “We take this opportunity of informing you that we are all well at this time. Was hoping that these few lines will reach your kind hand and find you all well. We would like to hear from you all and would like to see you all but we cannot tell when that will be, but one thing we must do and that is prepare to meet in Eternity, for if God permits us to live we will live for the future and we tell you all now that we are determined by the help of God to make our way to a better world. So no more at present.”

Dyer added a postscript: “Noah is still around,” referring to John Noah Francis, his best friend, who would died at Douglas at the end of that year, 1864. Dyer would survive Camp Douglas and return to his home at Ratcliffe Cove, where he died in 1909.

Francis, like so many others, was buried either at the City Cemetery at the edge of Chicago, or a smallpox cemetery near the camp. In January 1867, the army moved remains from the two cemeteries and buried them together at Oak Woods Cemetery.

What is now known as the Confederate Mound at Oak Woods contains the remains of at least 4,000 prisoners who died at Camp Douglas, possibly many more. It is considered the largest mass grave in the Western Hemisphere. At its base are carved the names of more than 4,000 men known to have died at Camp Douglas.

Much about the Civil War prison camps, particularly Douglas, remains unknown. Poor record keeping means the estimated number of inmates and deaths vary widely. Between 26,000 and 30,000-plus prisoners were kept there at some time during the war.

Between 4,454 and 7,000 men died at Camp Douglas, with most historians placing the estimate between 5,000 and 6,000. With 26,000 prisoners going through the camp during its existence, the death rate would be between 17 and 23%. However, it is worth noting that the total prison population would include those released in early exchanges; the death rate would have been much higher for those who entered Douglas at the time the men of the 62nd.

In May 1865, a month after the surrender of Gen. Robert E. Lee’s Army of Northern Virginia, Col. Benjamin Sweet, Camp Douglas’ commander, was ordered to release all prisoners. Those who took an oath of loyalty to the Union were provided transportation home. Those who did not had to find their own way.

Family stories state that Haywood’s Robert Henry Plott was the last prisoner freed from Camp Douglas. “The system was to release the Confederates in alphabetical order at the war’s end, but Robert’s records were lost, and he had to stay until the rest were gone,” wrote his great-granddaughter, Martha Plott Bolin. “He returned to his home in Maggie which was on the property where the Maggie School is now.”

Waiting for his release, Plott, who had seen two of his brothers died at Camp Douglas, wrote his family, “I want you to wait with patience till I come home. … I’ve been a prisoner a long time and have had many privations to endure.” James Anderson Inman would also witness the deaths of two of his brothers at Douglas.

The survivors of the 62nd’s internment were headed home to Western North Carolina, but many would carry the effects of their ordeal the rest of their lives — and many would find their lives shortened by their suffering.

Next Week: A look at the remnant of the 62nd that escaped surrender, and a look at some of the Haywood survivors of the 62nd following the war.

Sources for this story include: Thomaslegion.net; the Bicentennial Edition of the Mountaineer, July 2, 1976; To Die in Chicago: Confederate Prisoners at Camp Douglas by George Levy; and National Park Civil War Series: Camp Douglas.

The dead from Camp Douglas

Thomaslegion.net lists the names of all 442 soldiers in the 62nd Infantry who died as prisoners of war at Camp Douglas. Following are the names of the 76 men from Haywood County who were surrendered as part of the 62nd and who died at Douglas:

This offer is currently unavailable.