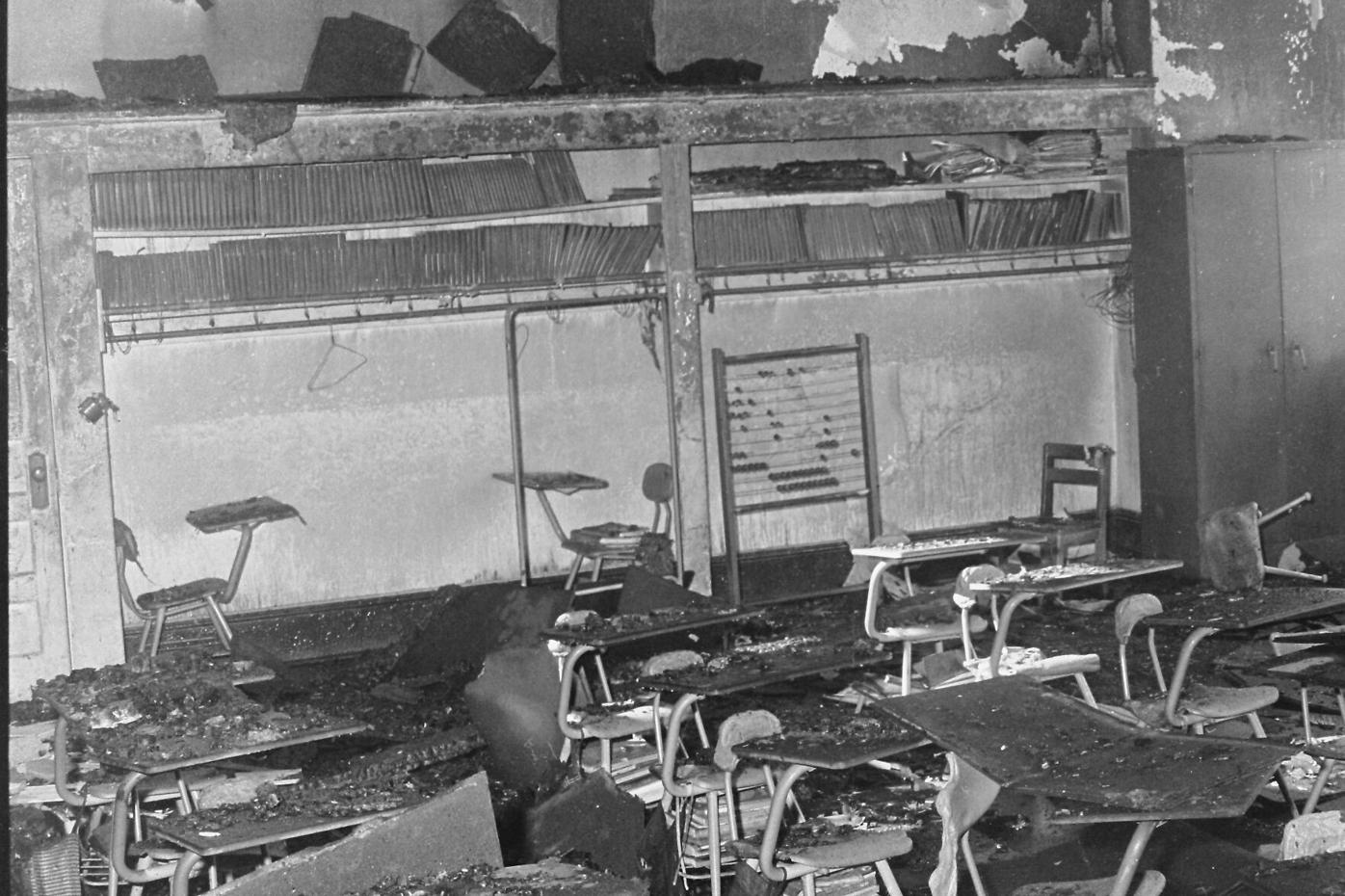 This is one of the burned-out classrooms at Junaluska Elementary after the 1967 Halloween fire. 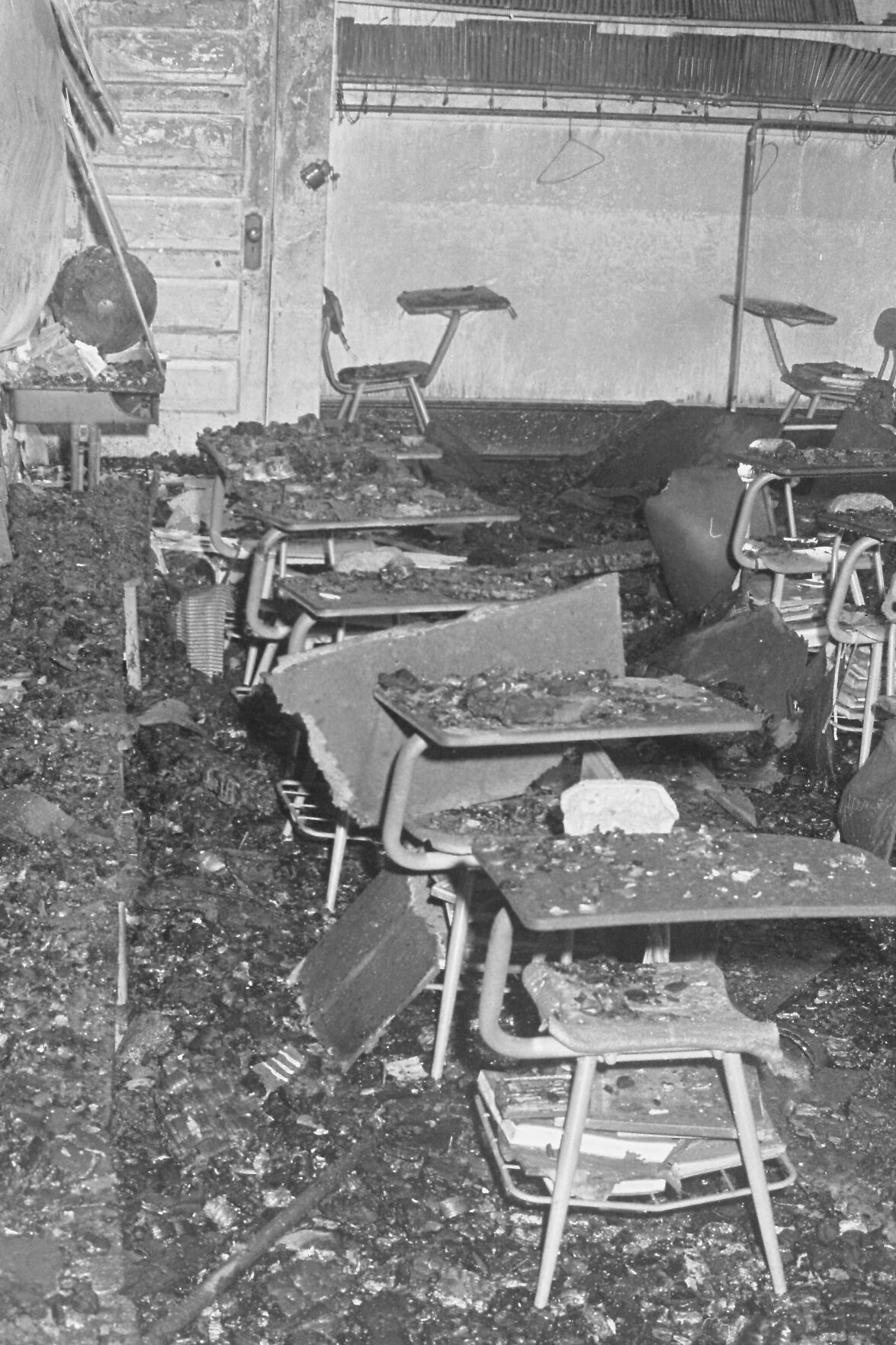 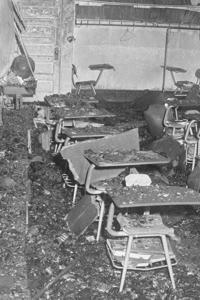 School desks were left in the rubble of a fire at Junaluska Elementary in a 1967 Halloween fire. 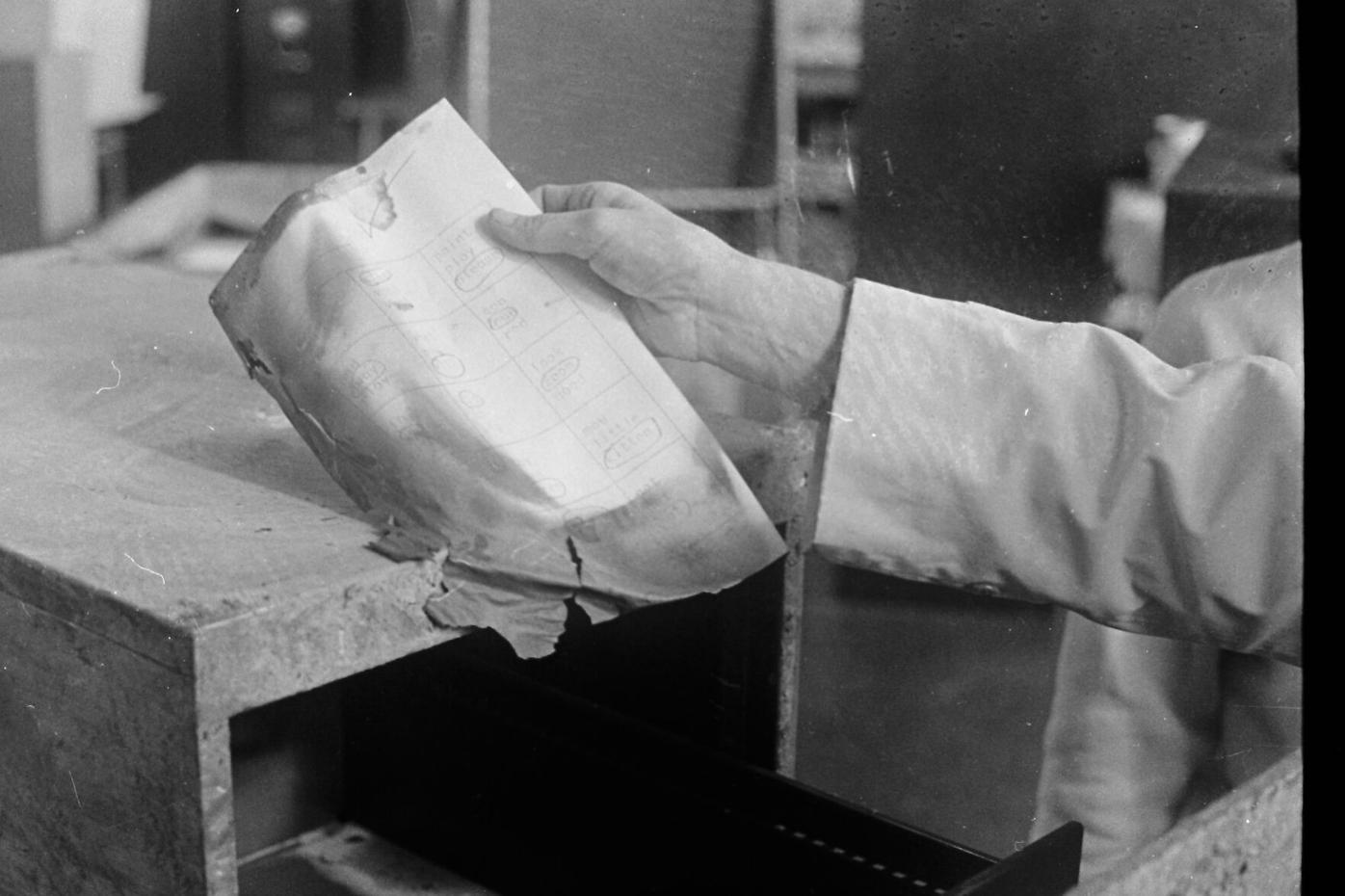 This is a child’s singed worksheet after the Junaluska school fire. 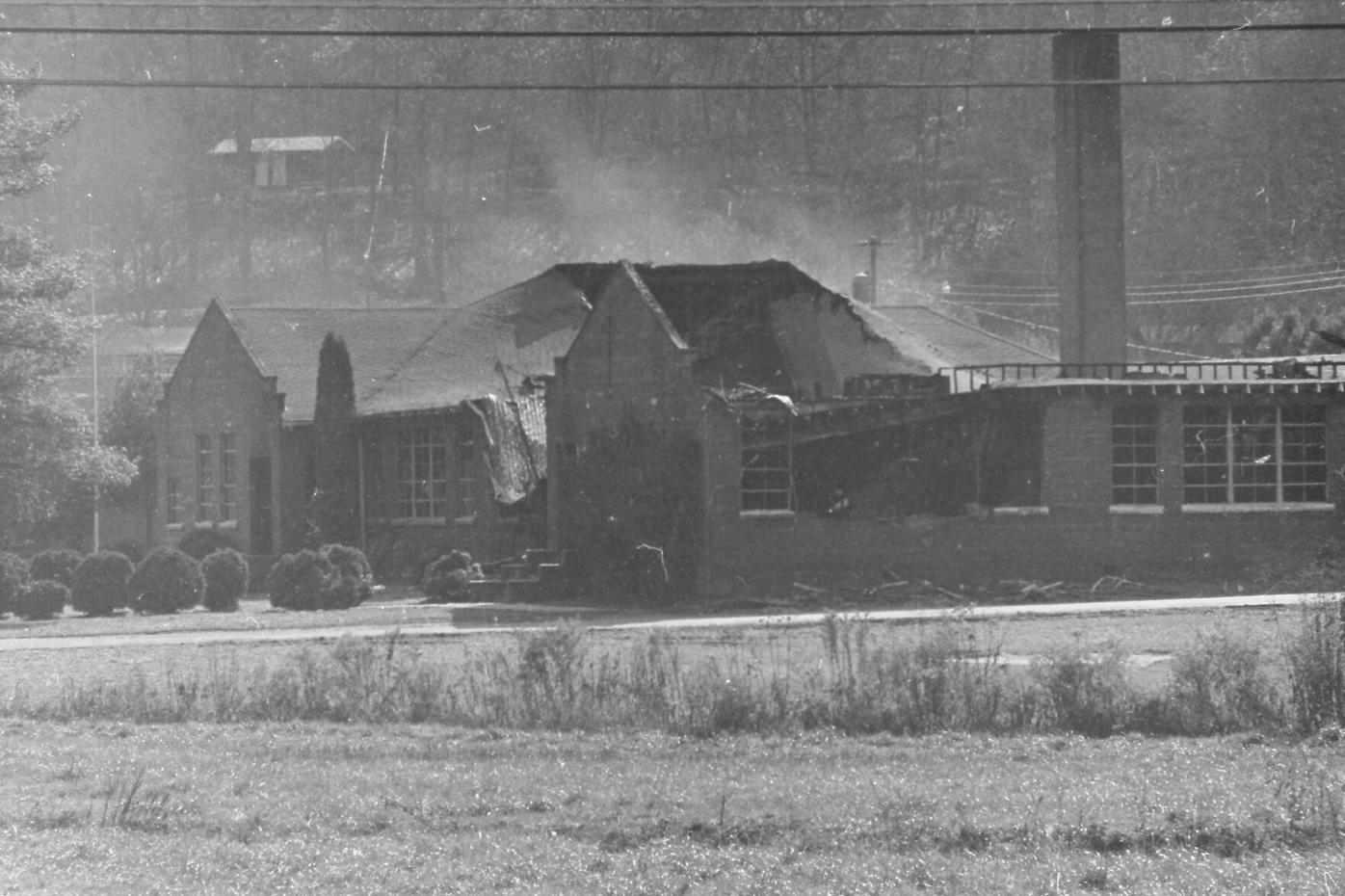 This was what was left of the Junaluska Elementary School after a 1967 fire. 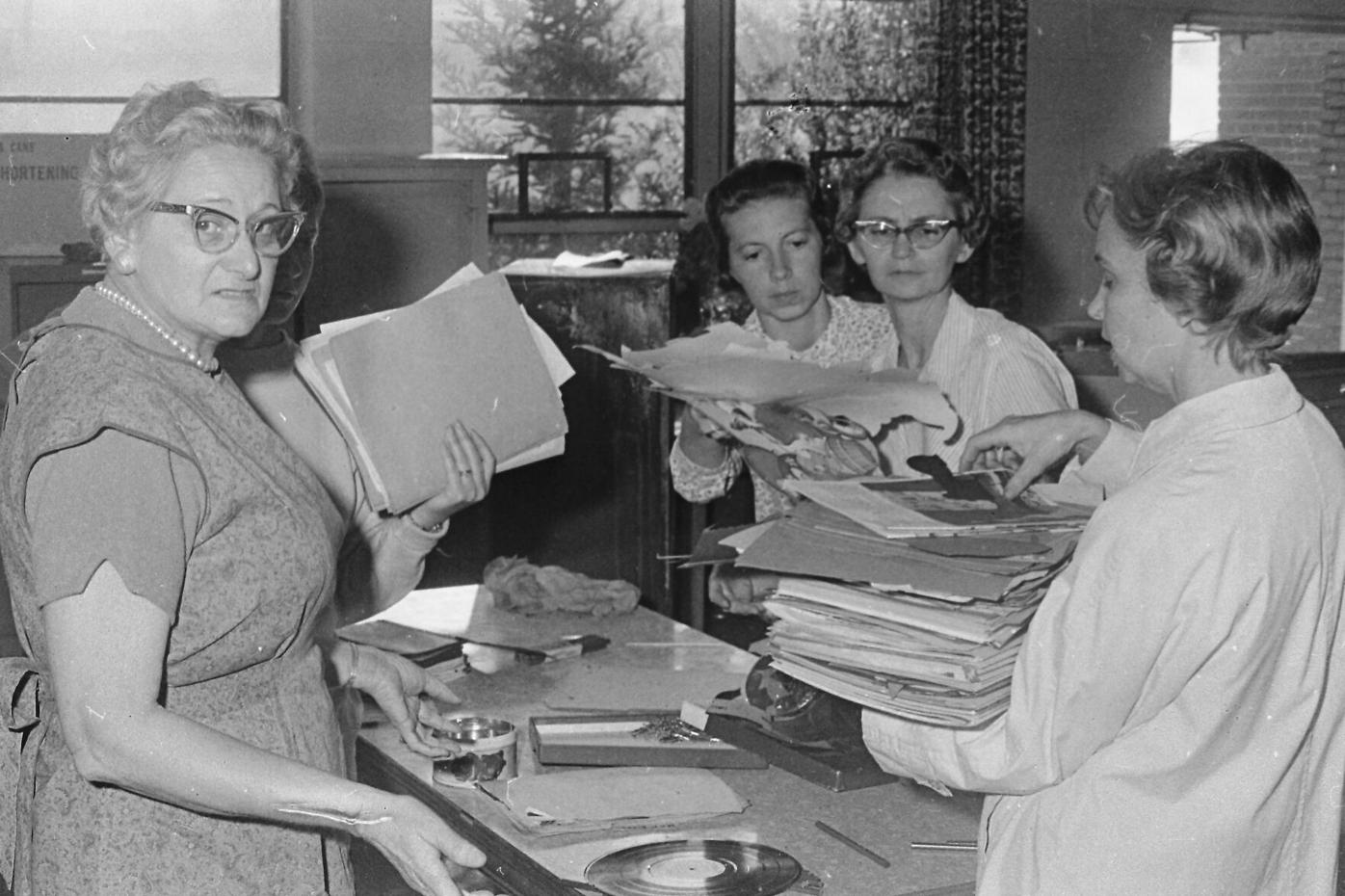 Ruth Noland, left, works with staff to clean up the school after the fire. 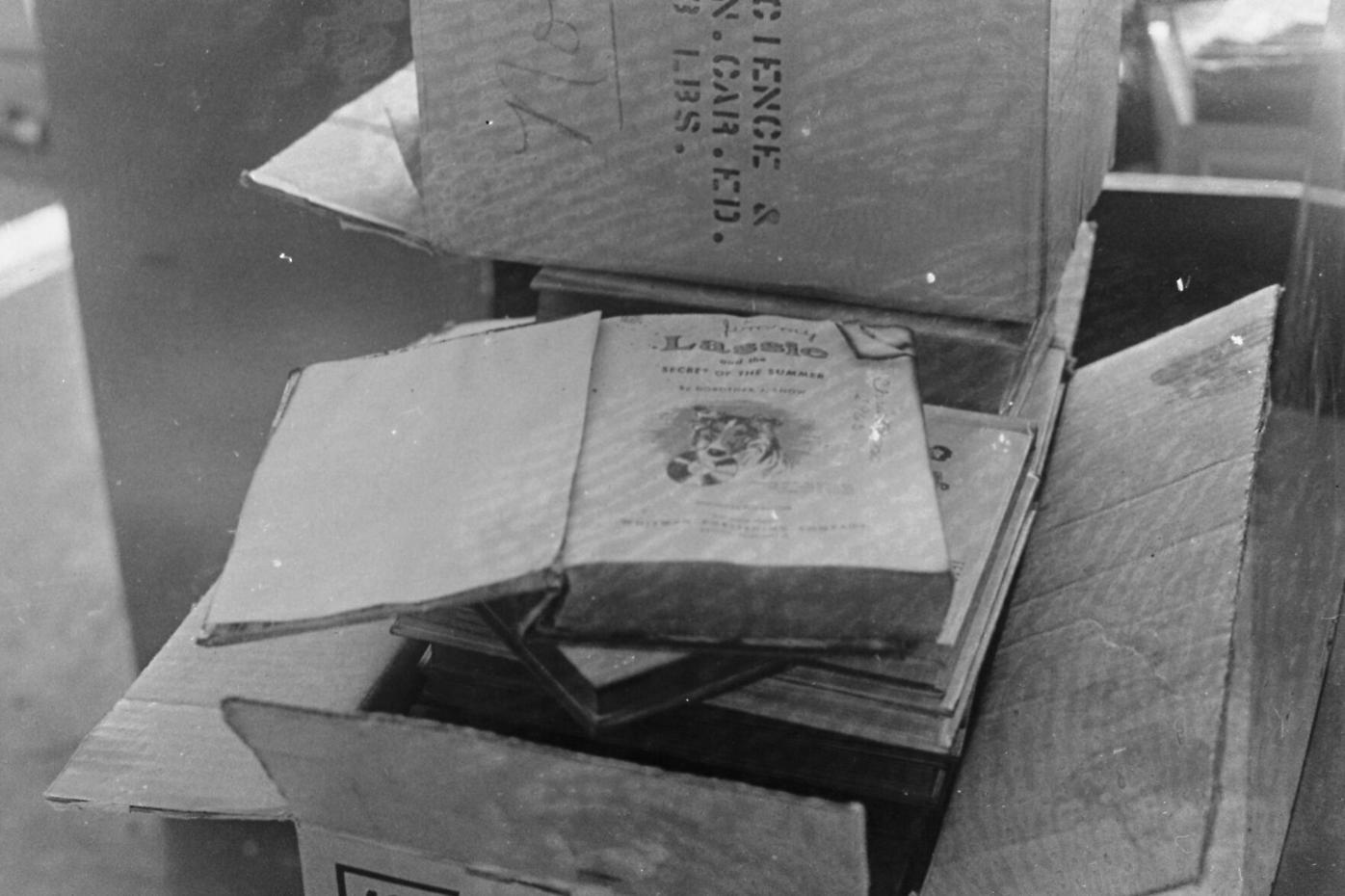 This is a singed copy of Lassie after Junaluska Elementary burned in 1967. 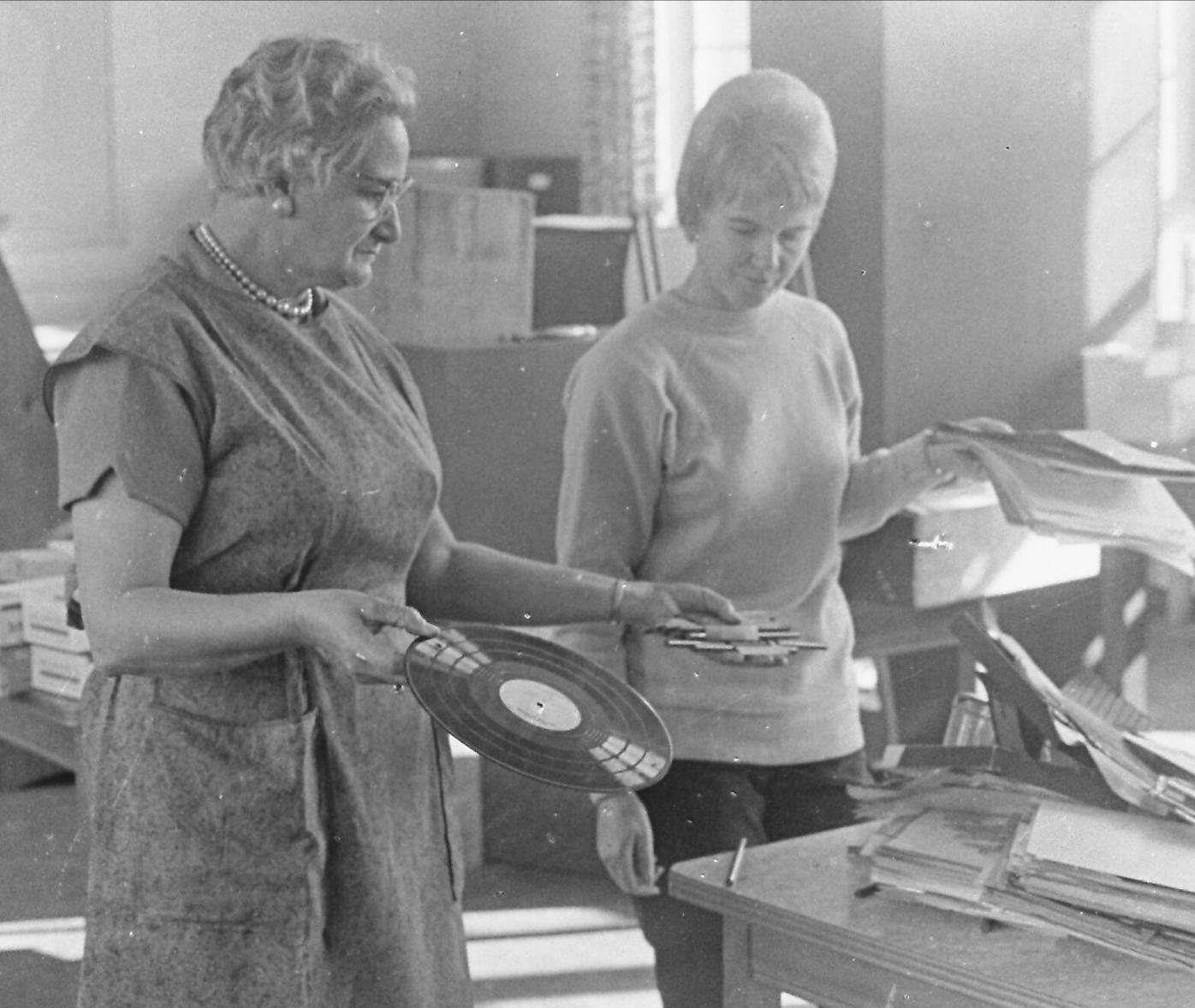 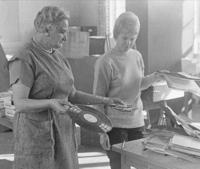 This is one of the burned-out classrooms at Junaluska Elementary after the 1967 Halloween fire.

School desks were left in the rubble of a fire at Junaluska Elementary in a 1967 Halloween fire.

This is a child’s singed worksheet after the Junaluska school fire.

This was what was left of the Junaluska Elementary School after a 1967 fire.

Ruth Noland, left, works with staff to clean up the school after the fire.

This is a singed copy of Lassie after Junaluska Elementary burned in 1967.

It was a Halloween night like no other in Haywood County, that evening in 1967 when Junaluska School went up in flames.

The children of Junaluska Elementary began that evening playing games at the school’s community carnival. Many of them ended the night in tears, watching the only school they had ever known go up in flames.

They would spend the rest of their elementary school years at Crabtree-Iron Duff School, remaining Junaluska Elementary students with their own teachers and classrooms, but without a permanent home. It was a temporary solution that would last for almost eight years.

The carnival ended about 8 p.m., and Junaluska Principal Ruth Noland, along with a custodian, closed up the school around 8:30 that evening. Noland went home but, living within sight of the school, looked toward the building and thought she saw a glow. She thought a light had been left on in the auditorium; her son said it looked like flames. They rushed back to the school and raised the alarm.

Within five minutes, firefighters from the Junaluska Fire Department were on the scene, soon joined by Waynesville, Clyde and Center Pigeon firefighters. But the school, constructed in 1929, with its wooden walls and attic, burned rapidly. Though firefighters brought the blaze under control in about an hour, flames gutted the auditorium and five of seven classrooms. Another two classrooms and the office were damaged by smoke and water.

And just like that, within two hours, 207 elementary students lost their school, for many of them, the only school they had ever known.

“I had already graduated from elementary to junior high school. But my family had been to the Halloween carnival with my younger sister. Always had a great time at that little country school and especially with such a wonderful principal. … When we had returned home from the carnival that night, we had gotten word that the school was on fire. Our Dad and Mom drove us over, and we sat in the car across the road and cried.” — Charlene Millwood Carswell.

A state investigation into the fire revealed the fact that despite the Halloween timing, it was unlikely arson was involved. It also revealed how very fortunate those attending the carnival were to have escaped harm.

The investigation, which concluded the fire started because of electrical overload, found indications the blaze was already under way in the school attic above the auditorium stage while the carnival was going on below. Had the fire started earlier, the outcome could have been much more tragic. More than 200 people had attended the carnival.

At least one man grasped how tragic it could have been. Joyce Reeves Massie remembered that she had been to the carnival when the call went out to Junaluska’s fire department to fight the fire. Her father was a firefighter, and he didn’t know his children were already out of the school and at their aunt’s house. “The story goes that he gripped the arms of his chair and was so panicked that he couldn’t stand up,” she recalled.

Two schools, one campus Even as the flames were being quenched, Principal Noland and school leaders on site were making plans to resume school. School board chairman Dr. Mack Setser and assistant superintendents helped carry supplies from the water-soaked office once the blaze was out (the school superintendent had been in Raleigh, but returned to Haywood as soon as he got word of the loss). The morning after the fire, school officials announced Junaluska students would attend school at Crabtree, beginning the next week – though they would retain their identity as Junaluska Elementary students, with their own classes, teachers and beloved principal. Thanks to consolidation of the high school and middle schools, Crabtree-Iron Duff had rooms available.It was a quick solution that would last for eight school years, until construction of the new Junaluska Elementary, which opened in 1975. There would be hitches with the system – Junaluska parents frequently complained about the long bus ride their children endured and periodically petitioned for temporary classrooms to be set up at the old school site. School officials refused that request, citing lack of funding and preferring to put resources toward a new school. Some students requested and obtained transfers to East Waynesville or Central Elementary, to avoid the bus ride while others preferred to stay with the students and teachers they had known.

What those who remember agree on, however, was the warm reception and support Junaluska children received from Crabtree-Iron Duff students and staff.

“I remember the (Crabtree-Iron Duff) staff being in a hustle, getting our school ready to share. We were excited to help the misplaced school, knowing they were in shock. I remember if I’m not wrong, we as a school met and greeted their buses when they rolled in.” — Lucy Sanford Trantham.

“I worked in the cafeteria at Crabtree at that time. I loved the new faces as well as the old.” — David Baker.

In the 1968-69 school year, Ruth Noland became principal of both schools upon departure of the Crabtree principal. And eventually the two parent-teacher associations held joint meetings and activities. In the years to follow, classes of Junaluska and Crabtree students were sometimes assigned to the same class, particularly when combination-grade classes were used.

Fran Nichols Rogers remembers teaching a combination first and second grade made up of Junaluska and Crabtree children, and Lucy Sanford Trantham recalled her third-grade year was a combination class with Junaluska students.

When the new Junaluska Elementary School opened to students in August of 1975, it was considered the best school facility in Haywood County, better, even, than the two new high schools that had opened the same year as the fire.

It came too late to be consolation for the students who had watched their school burn, however: “We hope for a new school, but a new one wasn’t built until I was in high school,” wrote Patty Messer Tucker. For those students, comfort lay in the memories of their tight-knit community school, in the warm welcome they received from Crabtree, and the security of continuing their education with the teachers and principal they had come to love at Junaluska.

Sources for this story include Mountaineer articles from 1967-1975. Special thanks to the Facebook group Nostalgic Haywood County for its members’ memories and suggestions regarding this story.

Funny, the way children remember things, and how those memories carry into adulthood. Today those children are in their 60s, but the details of that Halloween and the shock that went through their community remain vivid. For some of them, their grief focused on the personal items lost to the flames.

“I was in first grade. I had been carrying my writing tablet to school and back home everyday. That morning I asked my mom if it was OK if I left it at school if I did not have homework. She said yes. We went to the school carnival that night, Halloween night.

My teacher had pushed all the desks over on one side of the room to make room for all the families coming in. I looked at my mom and told her I needed to take my tablet home. … She said, ‘Wanda, it will be fine until the morning. You would never find it in those desks.’ We were just arriving home from the party when a neighbor came running and told Dad that the school was on fire. He turned the car around, and we went back to the school. I remember crying for that tablet. I cried so hard I just about made myself sick.” – Wanda Crumpler Byrd

“I was in the fifth grade at Junaluska then and Mrs. Noland was my teacher as well as the principal. My family and I had been at the Halloween Carnival that night and I had won the costume contest (a silver dollar!) Later that night it caught on fire. … I remember having a homemade pocket which was a bag that held our books that we hung on our desk. I was so upset that it got burned up. I do have a discarded library book that was in the fire. I still remember the smell.” – Cathy Cordray

“I was in fifth grade at Junaluska Elementary when this happened. My sister was in first grade and was the ‘Halloween Princess.’ I had taken some of my favorite books to school a couple of days before, and they were destroyed in the fire.” – Anita Brown Cullen.