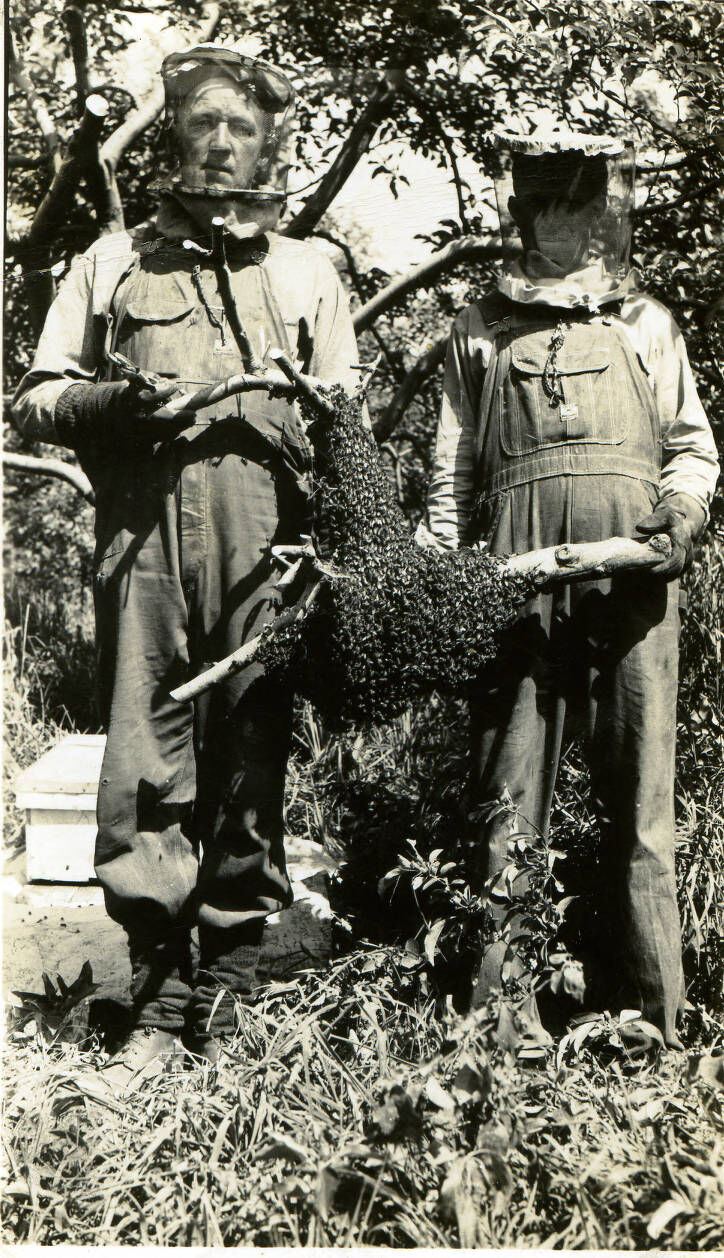 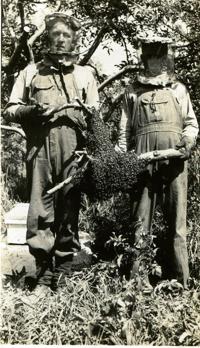 Bill Corbin, left, is shown with bees being moved to Barber’s Orchard to help pollinate the apple blooms. Bill Corbin, Louise’s father-in-law, was production manager until his retirement, when his son, Arthur, took over. 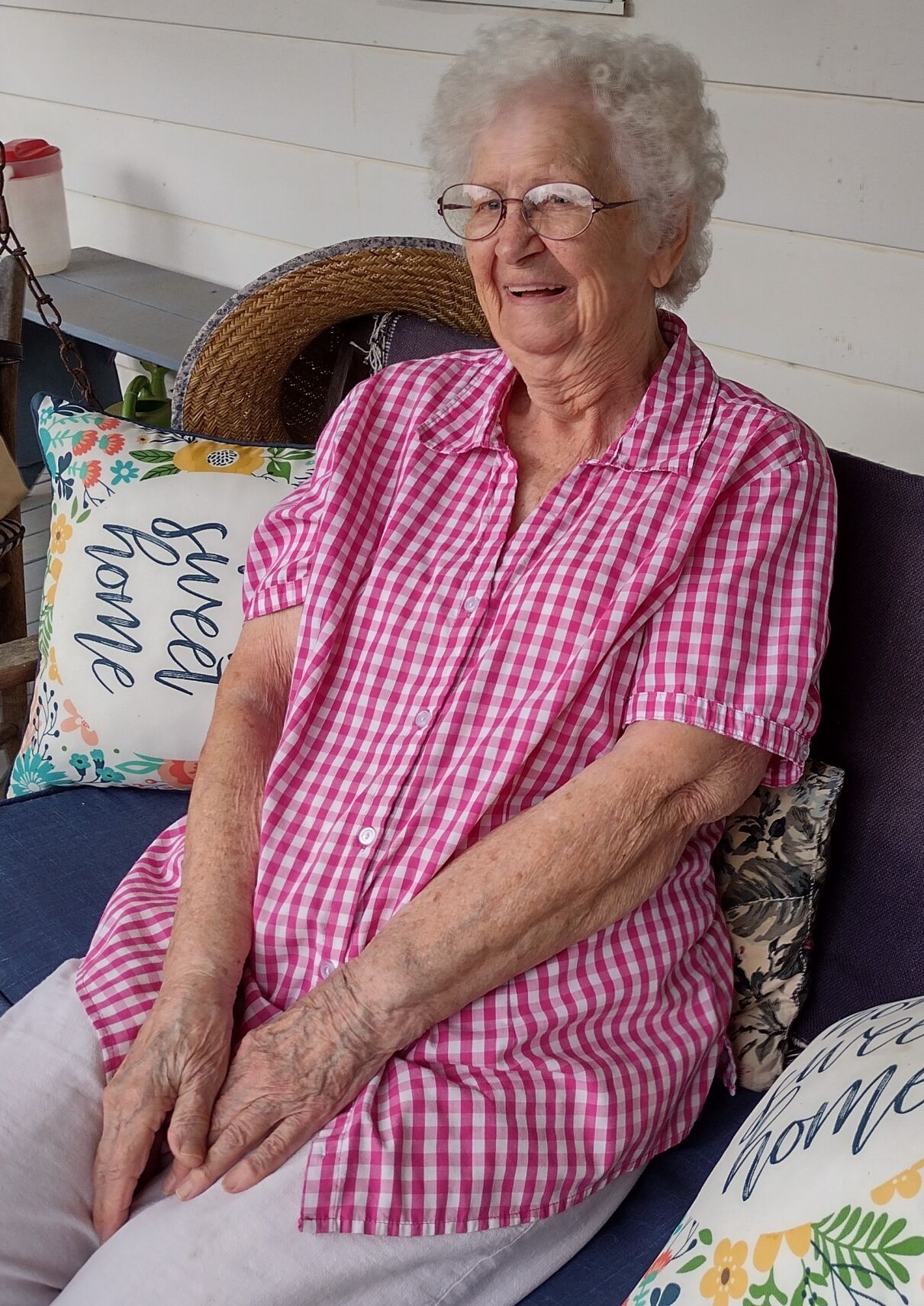 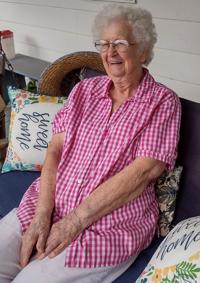 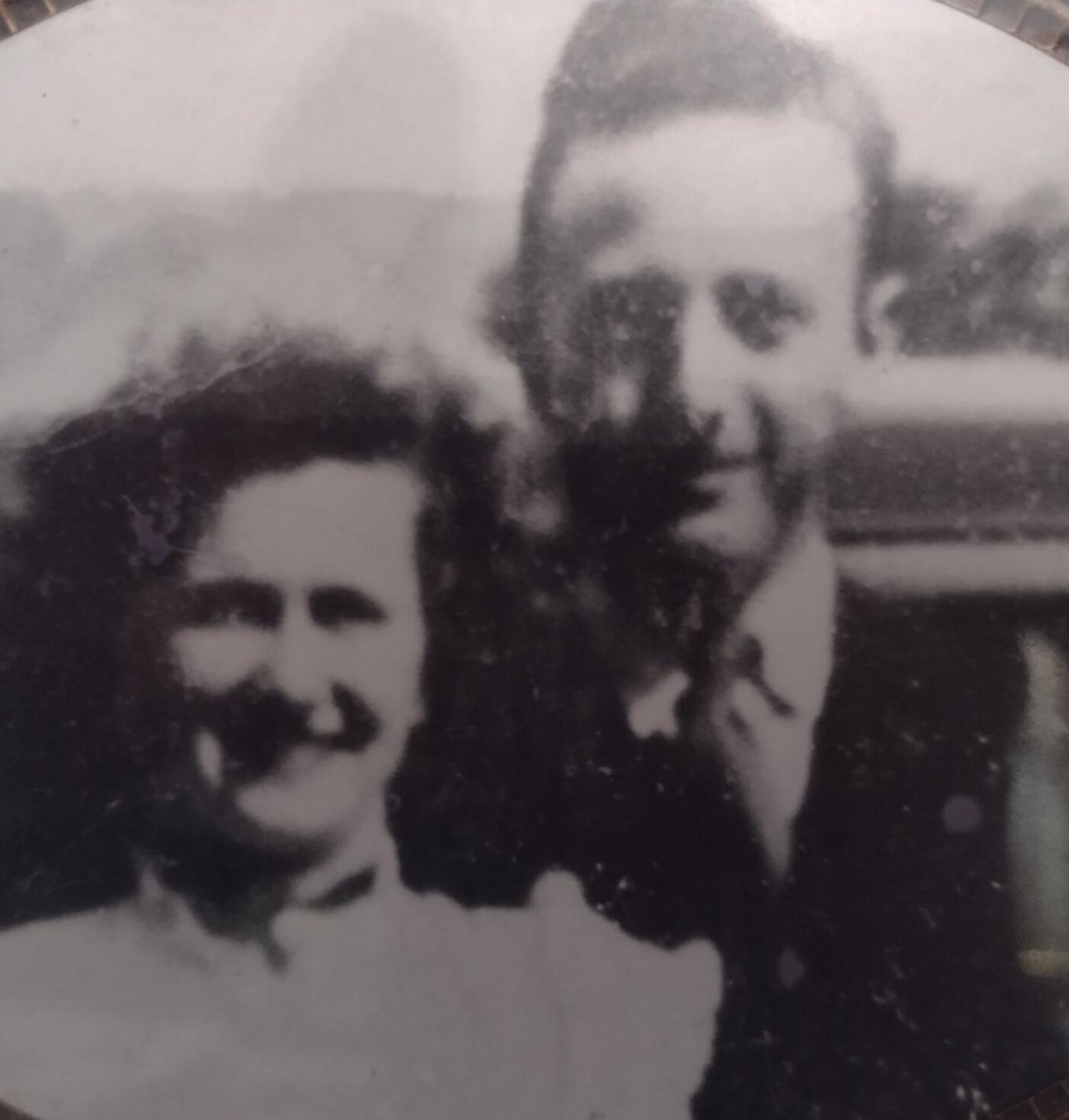 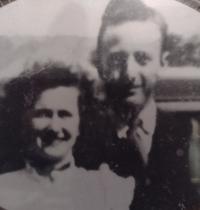 Louise and Arthur Corbin, pictured about the time of their marriage. 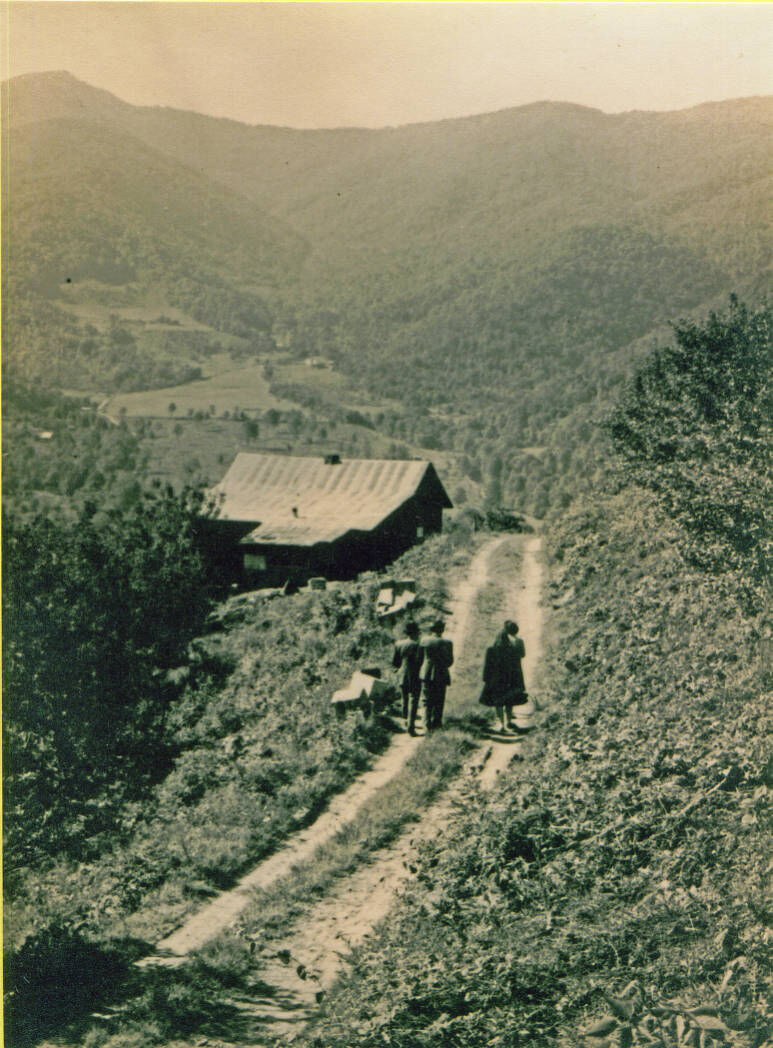 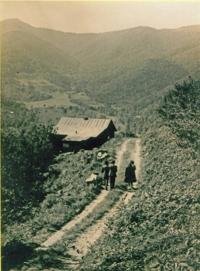 This photo of Barber’s Orchard shows one of the homes provided for employees of the farm, and may have been taken during the making of the movie, “I’d Climb the Highest Mountain,” which filmed some scenes at the orchard around 1954.

Bill Corbin, left, is shown with bees being moved to Barber’s Orchard to help pollinate the apple blooms. Bill Corbin, Louise’s father-in-law, was production manager until his retirement, when his son, Arthur, took over.

Louise and Arthur Corbin, pictured about the time of their marriage.

This photo of Barber’s Orchard shows one of the homes provided for employees of the farm, and may have been taken during the making of the movie, “I’d Climb the Highest Mountain,” which filmed some scenes at the orchard around 1954.

Growing up in Saunook, Louise McClure assumed she would marry and move away from the close-knit community just below the Balsam range. Instead, she found her happiness and calling within the community of Barber’s Orchard, close to home.

“I always thought I’d get married and go somewhere, and I did — about a mile down the road,” she said, laughing as she sat on her front porch swing.

Louise married World War II veteran Arthur Corbin in 1946, and Arthur had spent most of his childhood at Barber’s Orchard, where his father was foreman. The young bride moved with her husband to the orchard. And after their four children were old enough not to need her constant care, she, too, went to work for the Barber family. And the young mother, who had worked at Dayco and Wellco before her marriage, loved it all — the active labor and the orchard community that extended from the owner, Richard Barber, Jr., to the full-time employees and short-time workers who came during harvest.

“I’ve probably walked every foot of it, over 400 acres,” Louise Corbin said. “That was the happiest work I ever did.”

Arthur Corbin and his family came from Macon County when Dick Barber, Jr. hired Arthur’s father, Bill, as foreman in the 1930s. Arthur was about 12 years old. When he wasn’t in school, he was working at the orchard himself. Returning from Europe after World War II, he went to work under his father at Barber’s Orchard and married Louise. The newlyweds lived with his parents for a time, until they moved into a house above the fruit stand, a retail outlet for those wanting to purchase fruit. Later they moved to another house in the orchard, where they raised their family. When his father retired, Arthur became production manager.

Now at 94, Louise Corbin believes she is the last of the generation of those who worked and lived at the orchard, excepting perhaps a few people who worked there during their high-school years.

“All the folks who work in the orchard are gone, all the ladies who worked in the packing house are gone,” she said. “I don’t know why the Lord let me live this long, but I guess he had a reason.”

She lives within two miles of the orchard, still in her home community, surrounded by family. The woman who lived her entire life in the Saunook community has a national legacy however: Each year, between Thanksgiving and Christmas, Barber’s Orchard Fruit Stand ships about 1,000 apple cakes throughout the U.S. The cakes are sold throughout the season at the bakery and are so popular that the Arrington family, who own the business now, strictly limits the time period for shipment to be able to manage demand. Both current and former owners credit Louise Corbin with creation of that apple cake recipe.

But that cake, and the bakery, came much later. Louise began her work at the orchard on one of the thinning crews, which remove apples early in the season, to allow the remaining ones to grow large. She also learned to prune. “I even grafted trees,” she said. “The only thing I never did was pick apples — well, I did a little, but I was so short that the packing bag would drag the ground. And I didn’t spray.” She enjoyed the active work much more than she had enjoyed working indoors.

During harvest, the need for labor was intense. Dick Jr. would use buses to bring workers in — Louise’s kinfolk from Caney Fork in Jackson County would come by bus, while others would come from Panther Creek and other Haywood communities. In those days, many country women would pick apples to supplement their income.

Into the packing house

Eventually Louise was promoted to packing house manager, supervising the sorting and boxing of apples. “If Arthur couldn’t get them to work in the orchard, he’d put them off on me, cause he knew I’d fuss enough to get them to work,” she said.

The orchard was its own community, she said, close-knit, but not without its faults. She spent many Saturday nights riding around the orchard with her husband, trying to keep peace among the workers. The Corbins’ door remained unlocked, and occasionally they would awake to find one of the workers in their home, needing food or a ride to the doctor.

The community relationships at the orchard started at the top, Louise remembered.

Friend for a boss“Dick Jr. wasn’t a boss, he was a friend,” she said. “During times when we didn’t have work, he would give money to his workers to buy groceries.” She recalled one man living on the farm who would not work but had a number of children. Dick didn’t have the heart to force him out of the house, she said, and he would call Louise, instructing her to buy groceries for the kids.

Each year Barber’s Orchard had multiple entries at the N.C. State Fair. Dick Jr. would take the money that came with the many blue ribbons he won and turn it over to Louise, instructing her to “spend it on somebody that needed it.” One year she used the money to purchase white dresses for the young women graduating from high school whose families worked in the orchard. Another time, she used it to purchase coal.

In 1977, Dick Jr. sold the orchard to brothers Glenn and Gerald Stewart. Louise was already known as a cook — many times, the packing house crew would promise to keep things going, and “I’d run up and fix sausage biscuits for everybody,” she said. So it was natural for the Stewarts to ask Louise to help start up the bakery they added to the business.

Louise was initially reluctant to admit to inventing the apple cake. When working in the bakery, she explained, she began baking muffins, experimenting until she and the Stewarts were satisfied with the flavor.

Then Glenn’s mother found a recipe for German apple cake that Louise tried. The recipe didn’t suit her. Louise changed it, and changed it some more, until it became the cake sold today. “I switched it about to suit me, so I guess I did invent the recipe,” she said.

Through years of change

The Stewarts were victims of terrible timing in the apple business, purchasing the orchard during a time of high interest rates, then facing a series of years where early freezes wiped out much of their production. Mortgage-holders sold the orchard in 1988, though Glenn kept the fruit stand and its retail business going until he sold it to Benny and Jane Arrington in 1993. Through the turmoil, Louise kept working for the bakery, continuing with the Arringtons until her retirement about nine years later.

The Stewarts maintain a close relationship with Louise — Glenn, who lives in Haywood County, never fails to call on her birthday, Louise added, and often shows up with flowers.

Arthur Corbin died in 2003. Louise has remained active. Her daughter helped publish a cookbook of her apple recipes. She continues to quilt, though her vision is failing, and she is learning to piece the scraps together by touch, rather than sight.

Louise Corbin does not seem a woman content to be at rest. She continually rocks on her porch swing — a favorite spot for her — as she talks. She kicks off her shoes, then absently feels around with her toes, trying to get them back on her feet. “I don’t usually wear shoes,” she explains.

And she still cooks Sunday dinner for family, every week.