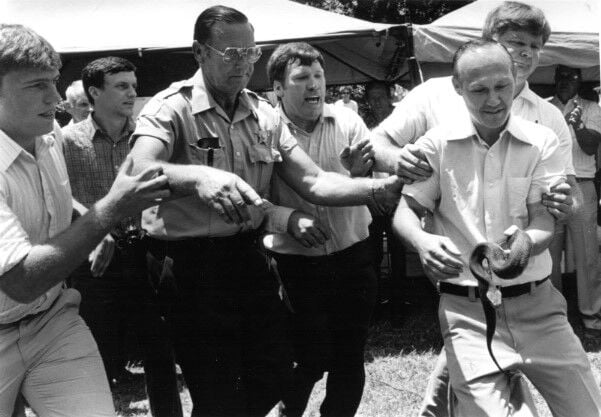 SNAKES — Snakes were used by preachers in the Apostolic church. 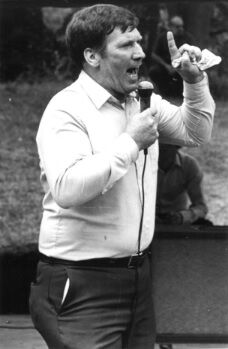 SNAKES — Snakes were used by preachers in the Apostolic church.

In July 1985, Charles Prince, owner of a fish-bait store in Canton, posted a sign announcing a type of event closely tied to Appalachia but almost unheard of in Haywood County. He would worship the Lord while handling snakes.

Within the month, Prince would be drawing national attention to his efforts. Within six weeks, the 47-year-old man would be dead, killed by a rattlesnake bite.

Haywood County had not been one of the mountain areas known for snake-handling worship services. Areas of eastern Tennessee, including neighboring Cocke County, were, and still are, home to churches that continue the practice. Snake-handling had occurred at one church in Jackson County during the 1920s.

But Haywood was not known as a place where believers would take up snakes, or drink lye, or hold flames to their faces, taking literally the New Testament verses of Mark 16: 17-18: “And these signs shall follow them that believe: In my name shall they cast out devils; they shall speak with new tongues; they shall take up serpents and if they drink any deadly thing, it shall not hurt them; they shall lay hands on the sick and they shall recover.”

Though Haywood was not familiar with the practice, Charles Prince was. His father was a minister who practiced snake-handling, traveling to services throughout the southern mountains.

His sister would later write a memoir describing her childhood and how, during their travels, the family often slept in tents with the snakes locked in a box underneath their bed.

When Prince decided to bring snake-handling worship to Haywood County, he had been involved in the practice in Tennessee, at churches in Morristown, Newport and Greeneville.

The summer of 1985, Prince felt led to bring his message and type of worship into Haywood County. He posted a sign announcing an open-air snake-handling service scheduled for Sunday, July 7, off of Newfound Road, north of Canton.

North Carolina law prohibited, and still prohibits, the deliberate handling or provoking of poisonous snakes, though museums, laboratories, educational and scientific institutions were and are exempted. (As an educational zoo and animal rescue operation, Soco Gardens Zoo in Maggie Valley was exempted from these restrictions, housing rescued rattlesnakes and educating the public about them.)

Before the service, Prince explained his beliefs to Mountaineer reporter John Reetz.

Prince claimed he routinely drew out copperheads, rattlesnakes and water moccasins from a closed box at church services, singing and praising the Lord while holding the writhing animals.

“We ‘re careful about not offering a snake to someone if we don’t know they’re a believer,” he told Reetz. “If a person comes up and we don’t know them, it’s sort of rude, but we hold them back and don’t give them a snake.”

In line with a literal interpretation of Mark 16, Prince would also drink lye at some services, and hold his face to flames of fire.

“I’ve sung a whole song with the fire under my chin,” he said. He had handled up to 12 snakes at one time during a service," he said. “If they’re really jumping around we won’t have that many,” he added. “We don’t want one to get loose. But usually the spirit of God calms them down.”

Though he had grown up in the culture, Prince said he did not become a believing snake-handler himself until nine years before, when he sat in a closet with a glass of lye.

After drinking the lye, he said, he felt as if his insides were on fire. He lay on his bed and read the Bible. He recovered and had been drinking lye, holding flames and handling snakes ever since. His hand bore bite marks though Prince said he had never had any serious effects.

With plenty of warning, the Haywood County Sheriff’s Department was prepared for the snake-handling service, confiscating six poisonous snakes before the noon worship hour. When one worshipper brought a cottonmouth water moccasin from his car and handed it to Prince, Deputy Onley DeHart grabbed the snake, threw it to the ground, shot and killed it, despite cries of protest.

Many of those attending were part of a traveling group, though locals sponsored the service and other local people attended, many out of curiosity, some out of protest, including some Christians who argued the passage regarding serpents and poison was being misused and misunderstood.

At the first service, the only casualty was the cottonmouth. The next service, held on Aug. 4, Haywood County Sheriff Jack Arrington ended up in intensive care.

In preparation for the second Newfound service, Prince had hidden poisonous snakes in a table inside the worship tent. He took the snakes out, grasping two copperheads and wrapping a Florida canebrake rattlesnake around his neck.

As Sheriff Arrington later recalled the incident, he was approaching Prince when the man turned and the rattlesnake’s head swayed to within inches of the sheriff’s face. In an instinctive response, the sheriff reached out and grabbed the snake, being bitten as he did so.

“After he was bitten, Arrington threw the snake on the ground and stood glaring at Prince without saying a word,” The Mountaineer reported. Then he walked with Highway Patrol Trooper Dennis Hall to Hall’s car and was rushed to the hospital.

“After Arrington was whisked away, the amplified voice of Ulysses Gordon Prince of Rome, Georgia, Charles Prince’s father, could be heard as deputies pinned down the snakes with canes and sticks and put them into boxes,” reporter Gary Moss wrote.

He quoted the elder Prince: “This man (Arrington) can’t blame nobody but his self. He had no business coming into our midst and taking the serpent away. I hope and pray it don’t kill him.”

It didn’t, but it was a close call.The sheriff was bitten about 1:15 p.m. and received a dose of antivenin at 1:30. Despite the fast response time, the sheriff was pale, sweating profusely and in severe pain by the time he reached the hospital.

The sheriff would spend eight days in the hospital, including some time in intensive care. His condition was considered critical on his arrival, and at one point there was concern about the possibility of severe damage to the arm where he was bitten.

Meanwhile, several Haywood County ministers challenged Prince’s interpretation of the Mark 16 passage. “What they’re saying is, ‘I’m putting God on the spot. I’m doing something really dangerous and God has got to protect me to prove he has these powers,” said the Rev. Jarvis Brock. “Well, God isn’t obligated if a man tempts him to to take care of him. If I walk in front of a car, and I say ‘God, stop that car; he’s not going to do it.’”

The words seemed almost tragically prophetic. Thirteen days later, Charles Prince was bitten on the thumb by a rattlesnake during a revival service at the Apostolic Church of God in Greene County, Tennessee.

He refused medical treatment. He continued to refuse treatment even after members of the congregation urged him to go to the hospital, asking them instead to pray for his recovery.

He died almost exactly 12 hours after being bitten. Charles Prince left behind widow and three sons from his second marriage along with three daughters and a son from a previous marriage.

“I still believe in handling serpents, said Grady Henry, a long time friend of Prince’s, the day after his death. It’s in the Bible.... It was just meant for him to go and me to live.”

In next week’s story: Where did the snake-handling tradition come from and why is it an Appalachian tradition?