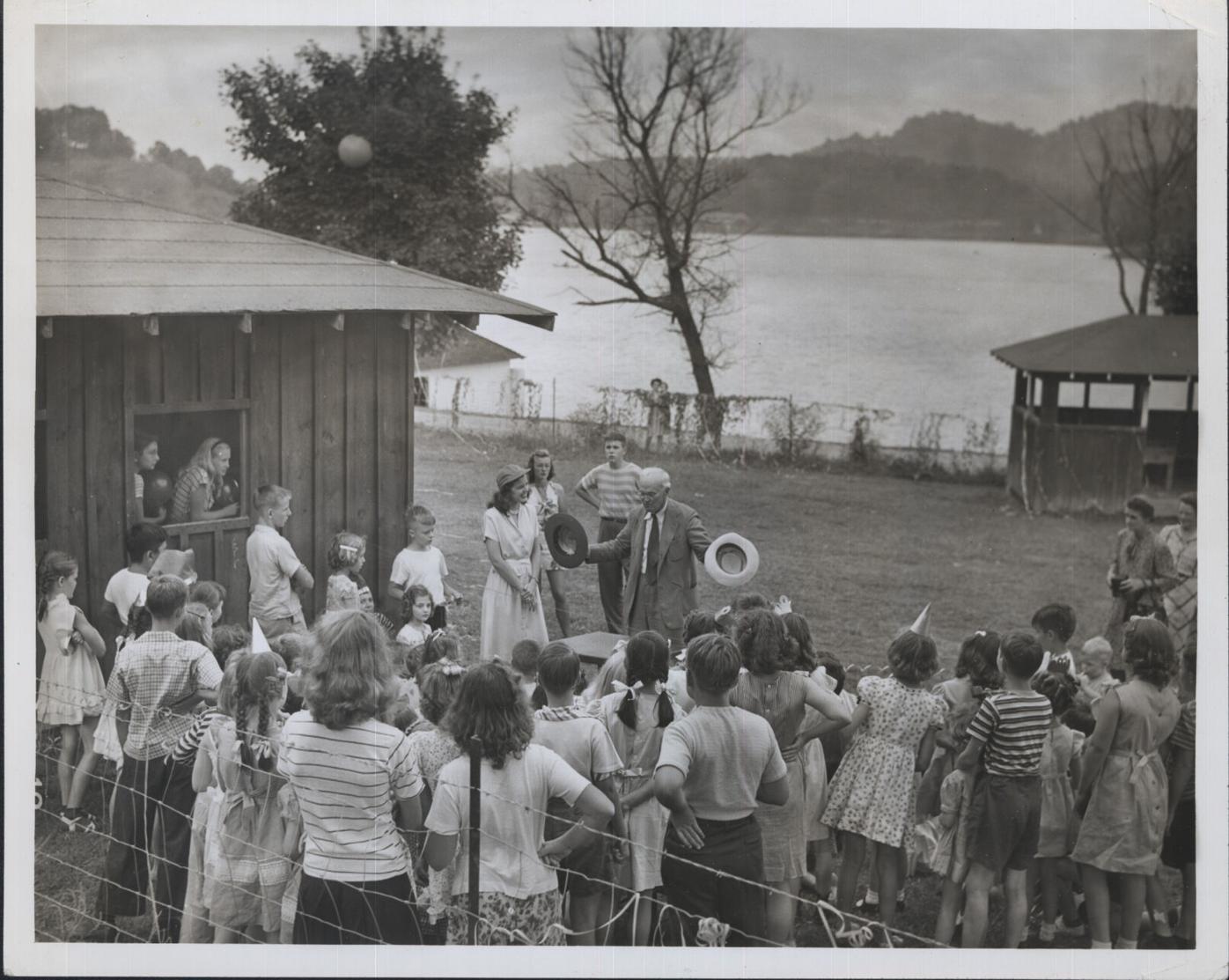 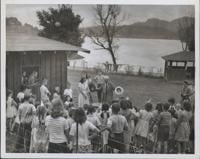 SHOWMAN — This photo shows JB Ivey, department store magnate, performing magic tricks at Lake Junaluska during one of the birthday parties he threw for the children each year. 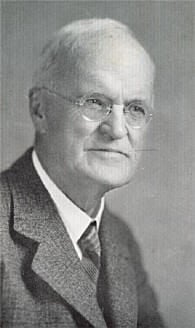 IVEY — J.B. Ivey, as portrayed on the title pages of his memoirs. 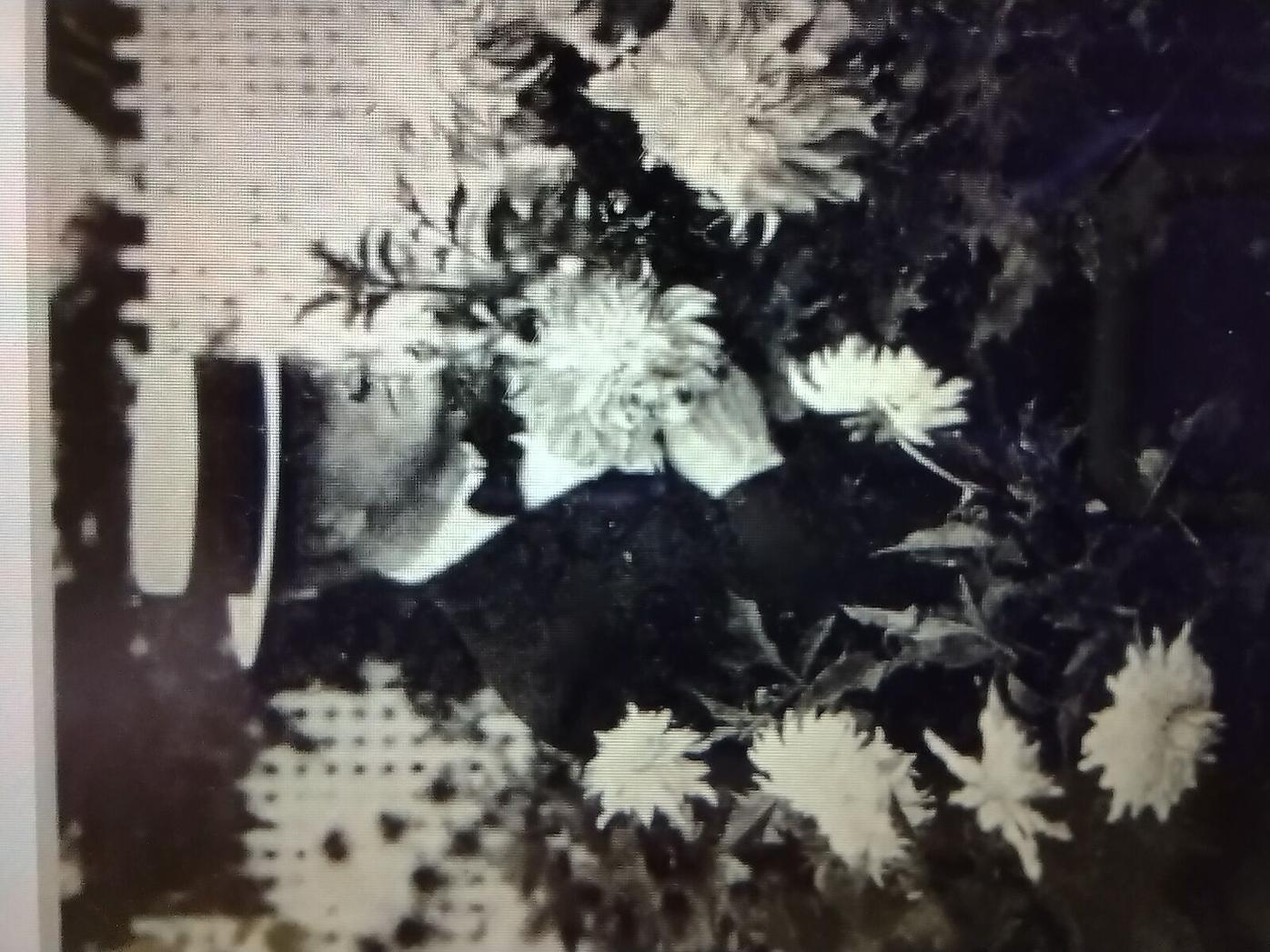 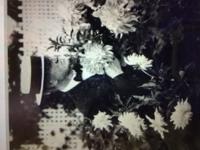 DAHLIA KING — J.B. Ivey among his dahlias at Lake Junaluska. 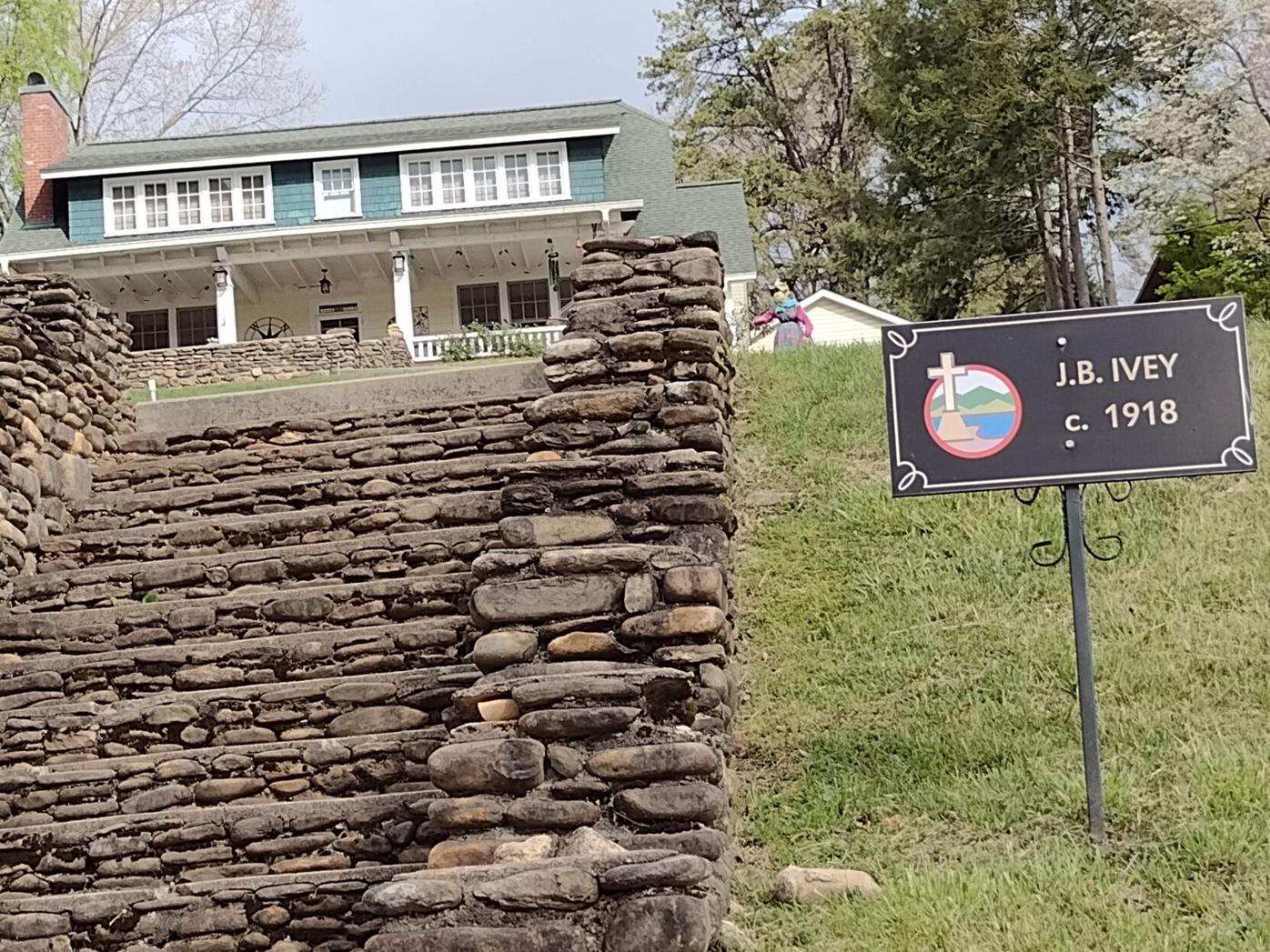 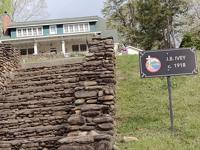 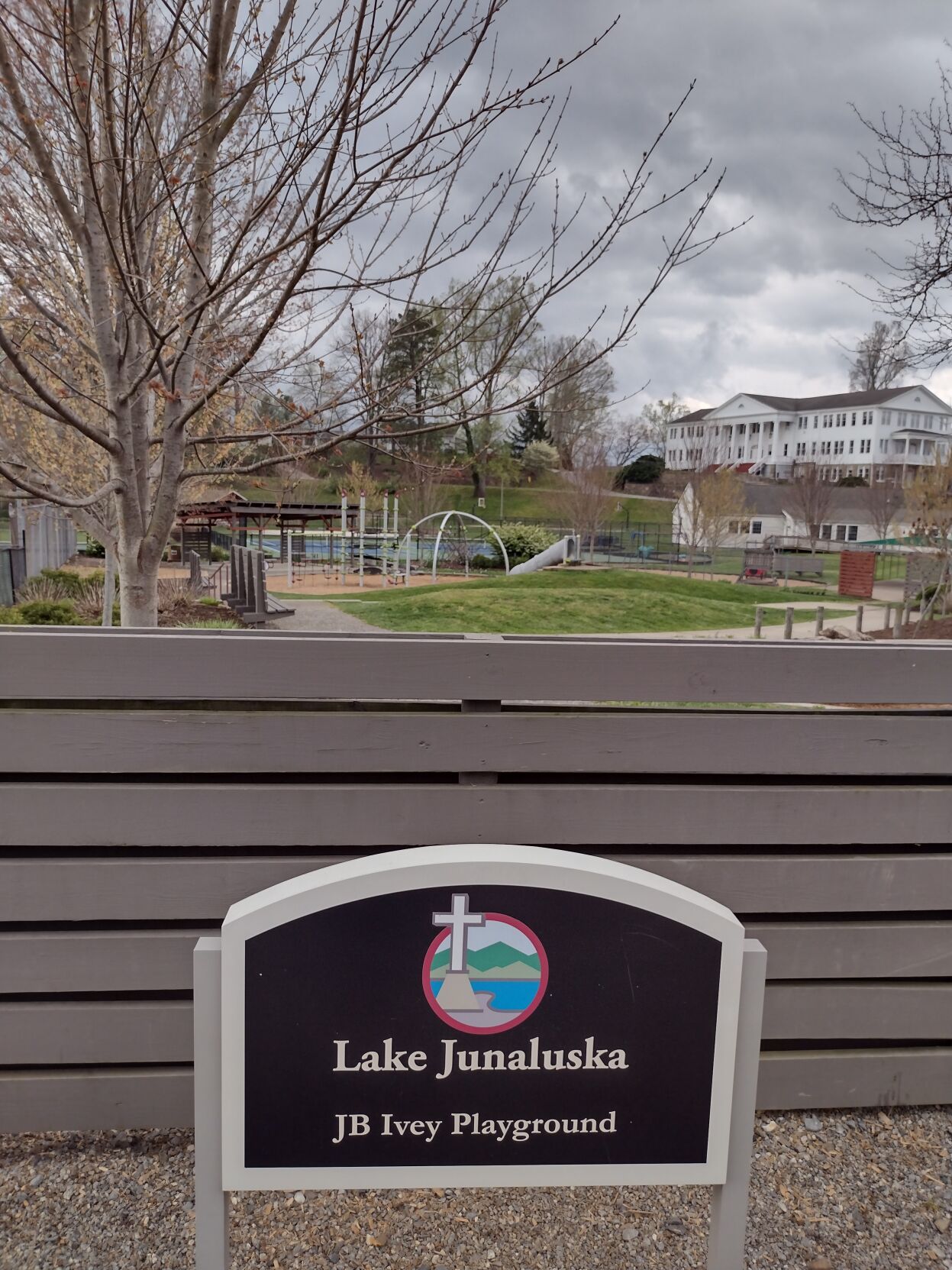 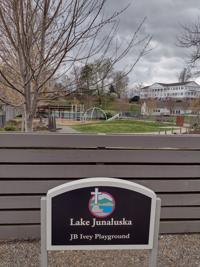 SHOWMAN — This photo shows JB Ivey, department store magnate, performing magic tricks at Lake Junaluska during one of the birthday parties he threw for the children each year.

IVEY — J.B. Ivey, as portrayed on the title pages of his memoirs.

DAHLIA KING — J.B. Ivey among his dahlias at Lake Junaluska.

In his lifetime, J.B. Ivey, the son of a Methodist minister, built a small business empire of six department stores which, after his death, expanded to 23 locations throughout the South. Almost any Southern woman over the age of 40 remembers shopping at Ivey’s stores, which were often anchor stores at shopping malls.

For Joseph Benjamin Ivey was a devout Methodist Christian who loved his summer community in Haywood County, and who indulged his love for children and flowers during stays here. Not that he restricted his faith to the church and assembly: Ivey pioneered approaches as a salesman and employer that were designed for the benefit of customers and staff. And in a time when most stores were closed on Sundays, Ivey went further – he refused to even advertise on the day set aside for worship. In fact, said Lake Junaluska resident Jim Hart, who remembers Ivey, the store owner curtained his display windows on Sunday, considering them a form of advertising.

Ivey, born in 1854, was the fifth child of George Washington and Selina Neal Ivey. His father served Methodist churches in the region west of Charlotte toward the foothills, and the family usually moved every four years, under new church assignments. When he was 15, Ivey was apprenticed to a carpenter, but poor working conditions and bad food likely contributed to his decision not to continue the trade. He then got a job in a country store in Cleveland County and over the years worked his way into a position of authority. While there, he persuaded the store owner, L.J. Hoyle, to try new marketing and merchandizing techniques that increased businesses and lowered the cost for customers who had to buy on credit. He also developed new pricing systems and entertainment, such as brass bands and hot-air balloons, became a part of special sale days. Ivey eventually worked his way into a partnership at Hoyle’s store. He later managed a store in Rutherford County and after several successful years, decided to develop own store. That decision was made in part because of his growing family; he had married Emma Gantt of Cleveland County in 1893. They would have four children who would live to adulthood.

In February 1900, Ivey opened his store on North Tryon Street in Charlotte. After a tough beginning, hindered in part by location, Ivey moved to a new location, and with his innovations, business thrived. In 1937, Ivey opened a branch store in Asheville. Later another opened in Greenville, S.C. In his memoirs, Ivey credited two business associates, David Owens, and W.T. Buice, for much of his success. He would have been content with a better-than-average living from the store, but those men pushed him to expand, he wrote.

Love of the lake

Ivey doesn’t specifically state in his autobiography when he first visited Lake Junaluska, but it must have been in its earliest years, soon after its founding in 1913. His first wife, Emma, died in March of 1917, but he described in his memoirs how, on one occasion, Emma went by train to Junaluska with one of his daughters while the rest of the family traveled by car.

“All of us well remember the first trip to Lake Junaluska in our car,” he wrote. Reaching Rutherford, they learned the road was closed near Chimney Rock, so they detoured south to Tryon. The roads were so poor, and the trip so long, that they stayed the night at Hendersonville before going on to Waynesville, telephoning a Methodist preacher in Waynesville to get word to his wife.

“The next day we got to Waynesville after a long trip,” he wrote. “It had taken us about a day and a half to go from Charlotte to Waynesville. There was very little of the road paved between Charlotte and Asheville and, being in a prophetic mood one day, I told my children that sometime in their lives, after I was gone, the road would be paved all the way from Charlotte to Lake Junaluska. This was too visionary a tale for them to take in.”

Ivey’s first wife died in March of 1917. The next year, he built a cottage at Lake Junaluska. His sister, Hattie, was his housekeeper there while his daughter Virginia helped him select the furniture. Lake Junaluska would be the place where Ivey would meet his second wife.

“One summer at Lake Junaluska, Mrs. Daisy Smith and her daughter, Mary Gilmer Weatherly, spent some time there,” Ivey later wrote. “Mary Gilmer and (daughter) Virginia were classmates at Randolph-Macon (college), and Virginia also knew her mother, who had visited there several times. We took Mrs. Smith and her daughter out on the lake in our canoe, but I think neither one enjoyed that experience, as they were afraid of the water.

“I became interested in Mrs. Smith and went down to her home in Clio, South Carolina, several times to see her. As I saw more of her, I fell in love with her and got her consent to marry me and become a mother to my children.”

They married in October of 1919. “Daisy has made an excellent mother for my children and is loved by all of them,” Ivey wrote. “… She loves Lake Junaluska as much as any one of us. We both love church work, and our tastes generally are the same.”

Soon after his marriage, J.B. and wife Daisy attended a dahlia show in New York, where Ivey was so taken with the flowers that he purchased about half a dozen tubers. He planted them at Lake Junaluska, “as it was generally considered then that dahlias could not be grown in the lower country,” and they attracted attention. He liked them so much and he planted more the next year, until he became known for the flowers, and people would travel to see them. An Asheville newspaper dubbed Ivey the “King of the Dahlias.” Ivey engaged in friendly competition with Will Shelton, whose home is now the N.C. Museum of Handicrafts in Waynesville. Together the two men sponsored dahlia shows, usually taking home most of the prizes between them. Ivey provided many of his flowers to decorate Stuart Auditorium, which only increased his reputation for the flowers. Ivey’s passion was so strong that he visited dahlia farms from New Jersey to California and wrote a book on dahlia production. Over time his love of flowers expanded into tulip and gladiola production, and he eventually purchased greenhouses, allowing him to grow flowers year-round.

Ivey may have been a pioneer in Junaluska’s reputation for its roses and rose walk. He tried for years to grow roses at his Charlotte home, and found it difficult. At Junaluska, “I asked some local flower growers why they did not have roses. I was told that the roses could not be grown successfully in the mountains. I thought I would try it anyway, and to my gratification, I found … they were much finer than I could grow in Charlotte.” His rose garden became another attraction for visitors.

Ivey was generous in his love of flowers. The Sept. 20, 1945 edition of The Waynesville Mountaineer reported his invitation for anyone to visit his dahlia gardens from then until frost, asking they arrive before 11 a.m. or after 5 p.m., “as the flowers are best during those hours.” Each morning, the paper reported, three dozen blooms were placed at the entrance to the garden, with the invitation for those passing by to take bloom home to enjoy.

Ivey loved children, funding and building a playground at Lake Junaluska. For a number of years, he even employed staff to work at the playground during the summers.

The department store magnate hold an annual party each summer for the children at the lake. The Aug. 19, 1926 edition of the Mountaineer described one such event, held three days before.

“J.B. Ivey of Charlotte was host to several hundred children,” the report stated. “… Children who were the recipients of Mr. Ivey’s hospitality were loud in their praise of their ‘patron saint of the playground.’ … Confetti, serpentine paper, clown hats and favors of many descriptions were in evidence. Individual cups of sweetheart ice cream were served, and the evening closed with the ascension of a big gas balloon. Organized games and fun on the merry-go-round, sliding board, ocean wave, swings and other playground equipment were engaged in by the young guests.”

Years before, when teaching Sunday school, Ivey had learned magic tricks to help hold the attention of his students. He would sometimes perform those tricks for the children at the lake.

When Ivey died in on April 4, 1958 at the age of 93, newspapers across the state celebrated his achievements.

“His early Christian training shaped his entire life,” The Mountaineer stated. “He pioneered in such practices as early store closing hours, shorter work week and paid vacation for employees. He permitted no advertising by his stores on Sunday.”

The Ivey signs over 23 department stores came down in 1990, when Dillard Department Stores purchased and absorbed the chain. But for Haywood County citizens, the legacy of the kind-hearted man who loved flowers and children remains, with the J.B. Ivey playground at Lake Junaluska and the roses inspired in part by his early horticultural successes.

In addition to those cited above, sources for this story include “Joseph Benjamin Ivey,” an article written by Garland R. Stafford for the web site NCpedia, drawn from the “Dictionary of North Carolina Biography, edited by William S. Powell; and “Ivey’s Stores” by Wiley J. Williams, also on NCpedia, drawn from the “Encyclopedia of North Carolina,” also edited by Powell.