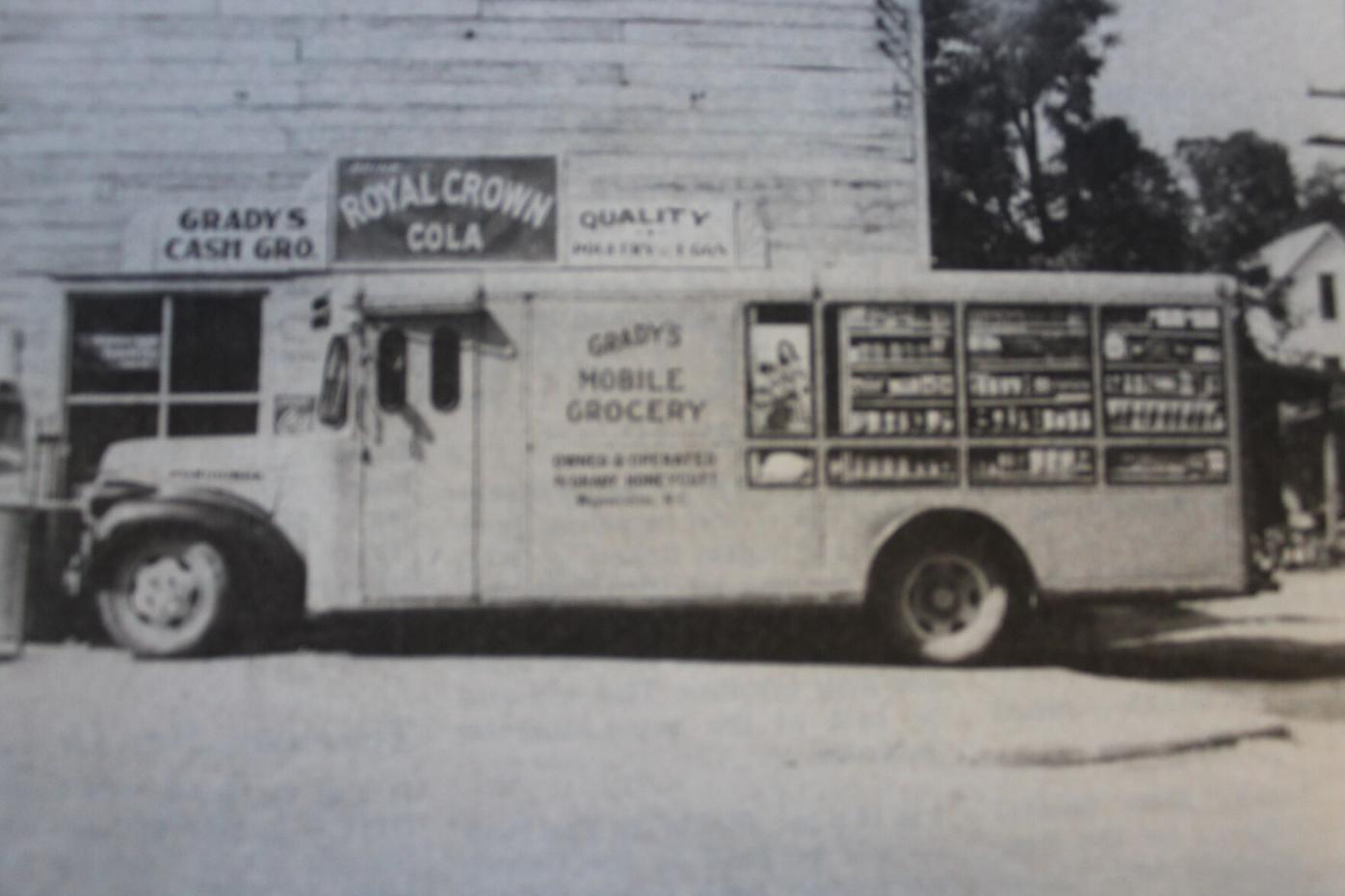 ROLLING STORE — Grady Honeycutt’s “rolling store” is pictured in front of his grocery store in the Frog Level section of Waynesville, around 1947. The truck featured long shelves down each inside wall, stocked with items from coffee and sugar to school supplies. This building is still standing beside the Richland Creek bridge on the old Dellwood Road. 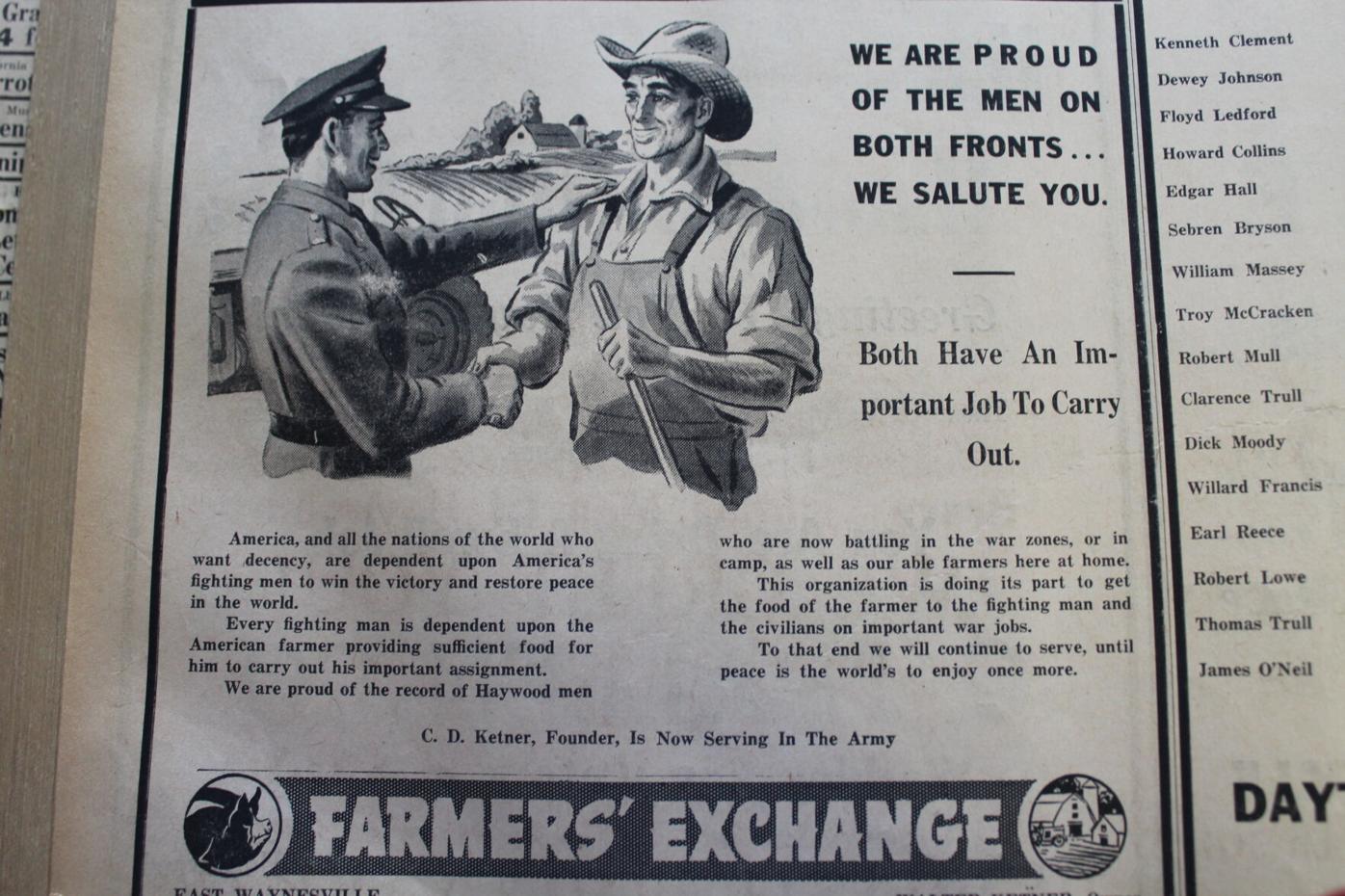 RECOGNIZED — C.D. Ketner turned over full operation of the Farmer’s Exchange to his brother when he went into service during World War II. This ad, paying tribute to both military and agricultural endeavors, ran in 1944. 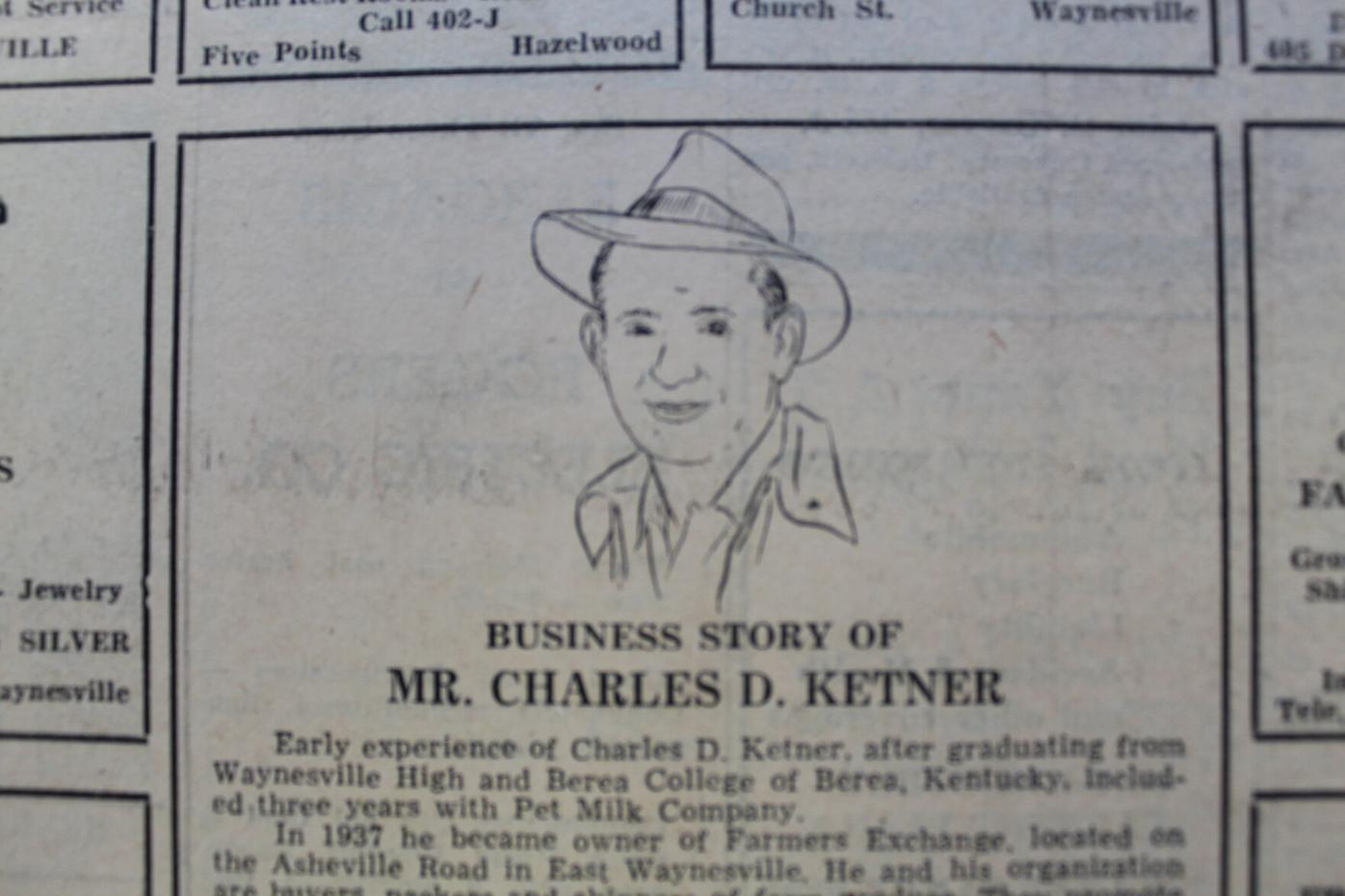 The idea of a "rolling store" for Haywood County was first developed by Charles D. "Shorty" Ketner in 1937. This sketch of Ketner was featured in a business advertisement in The Mountaineer in 1954.

ROLLING STORE — Grady Honeycutt’s “rolling store” is pictured in front of his grocery store in the Frog Level section of Waynesville, around 1947. The truck featured long shelves down each inside wall, stocked with items from coffee and sugar to school supplies. This building is still standing beside the Richland Creek bridge on the old Dellwood Road.

RECOGNIZED — C.D. Ketner turned over full operation of the Farmer’s Exchange to his brother when he went into service during World War II. This ad, paying tribute to both military and agricultural endeavors, ran in 1944.

The idea of a "rolling store" for Haywood County was first developed by Charles D. "Shorty" Ketner in 1937. This sketch of Ketner was featured in a business advertisement in The Mountaineer in 1954.

Before every family had an automobile or truck, country people in Haywood County welcomed the sight of the Grady Honeycutt’s “rolling store.”

Beginning in 1937 and continuing into the 1950s, children and parents looked forward to the Honeycutt’s arrival, which gave them a chance to shop for merchandise ranging from school supplies to groceries. It was a blessing to many women in a time when few families had more than one automobile, and some still had none.

Every day except Sunday, Honeycutt’s trademark yellow truck would make a run into the country, from Jonathan Creek and Cove Creek to Iron Duff, Fines Creek and Bethel on Saturdays. Grady usually made the journeys while his wife, Virginia, minded the grocery business in Waynesville.

Though the familiar yellow truck hit roads around 1946, Honeycutt’s efforts at a rolling store go back almost another decade.

In 1937, Charles Dee “Shorty” Ketner left his job as manager of Pet Dairy’s Waynesville plant and started a new business, the Farmer’s Exchange. Ketner, who had grown up on a Haywood County farm, had an idea: many farmers had produce they could not get to town, particularly when the quantities were small and gas expensive. And those same farmers often needed goods. Why not create a business that met both needs? With two trucks making runs into the country, and another truck taking the farm produce to boarding houses, retail stores and other customers in town, the exchange was set up to do just that.

“We figured if we could take surplus farm produce off the farmers’ hands, while in its fresh state, and turn around and sell it to consumers, that all of us would be better off,” Ketner said.

By 1939, the business had already expanded three times, according to the Waynesville Mountaineer, and Ketner had acquired a partner, Grady Honeycutt.

The two men had 11 routes throughout Haywood County, stopping at farms along the way. Farmers could purchase items by trading their crops, or Farmer’s Exchange employees would pay cash for their produce.

“The trucks come into the store in East Waynesville every afternoon, unload the pick-ups of the day, and it is put in shop for the retail trade or put on a truck and carried to distant cities where we maintain regular contact with large wholesalers in produce, chickens and eggs,” Ketner told The Mountaineer in 1939. As for spoilage, Honeycutt’s partner claimed, “We keep the stuff moving too fast for that. When our two trucks report in the afternoon, we often pack up the produce and have it en route to Atlanta or Charlotte or somewhere before 10 o’clock that night.

“It is amazing to see the trucks come in some afternoons,” he added. “There’s chickens and eggs, always and often, all kinds of vegetables, nuts in season, hides, sour cream and almost anything that grows.”

The newspaper claimed the Farmer’s Exchange drivers often ran errands for their customers in the country when they returned to town.

World War II interrupted Ketner and Honeycutt’s work in the rolling stores. Both served in the war while Ketner’s brother Walter took up management of the Farmer’s Exchange. By the end of the war, Ketner and Honeycutt were apparently no longer in partnership, perhaps because Charles preferred working with his brother.

In the year after war’s end, however, Honeycutt apparently saw an opportunity. The Farmer’s Exchange was focusing more on providing agricultural supplies to local farms, so Honeycutt opened up Grady’s Grocery in Waynesville, first beside the Richland Creek bridge at Frog Level, later at the intersection of Dellwood Road and Lee Street. Each evening after the day’s run, he would stock his rolling store for the next, loading two long rows of shelves with sugar, flour and other groceries hard to produce on the farm, as well as canned foods, coffee, toothpaste and toothbrushes, crackers and seasonal items, such as school supplies.

In canning and preserving season, Honeycutt would carry 100-pound bags of sugar, Virginia Honeycutt recalled in a 1991 interview. Many families would buy that much at a time to put up fruit. Meanwhile Virginia would be busy at the Waynesville store, breaking up 100-pound bags of dried beans and repacking them in two-pound bags for the rolling store customers. Tobacco and snuff were also popular items.

One customer, Flora Ball, recalled in the 1991 story how Honeycutt would allow her farming family to buy its groceries on credit for almost an entire year, until the check for its tobacco crop arrived. The very presence of the store was a blessing, she said.

“We didn’t have a vehicle at the time,” she said. “Even after my husband went to work, we still bought from the mobile store. We all looked forward to it, everybody would come out to meet him.”

The late Roy Parton Sr., who sometimes drove Honeycutt’s truck, described him as a outgoing man who loved to joke: “He was the kind of person who never met a stranger.”

Honeycutt died fairly young, in August of 1965, from injuries sustained in a motorcycle accident. He had divorced his wife Virginia three years before. The groceries business had waned, and Virginia returned to school and began working as a nurse.

A request on the Nostalgic Haywood County site on Facebook brought back some memories for those who grew up in the days of the rolling store.

“I always got to buy candy from Grady’s mobile store when I was at my grandmother’s in McElroy Cove, Iron Duff,” wrote Phyllis Crawford.

“I used … Honeycutt’s store,” commented Marlene Hill. “I also worked with Virginia for a while. Love both the (library) bookmobile and the store!”

Another individual remembered Honeycutt long after his passing — his ex-wife, Virginia, confessed to regularly tending his grave for decades after his death, until she was no longer physically able. She died in 2010, at age 92.

Sources for this story include Waynesville Mountaineer articles from July 8, 1937 and June 29, 1939; the articles “Folks knew what was in store when mobile grocery rolled up,” in May 1991; an interview by Kathy N. Ross with Virginia Honeycutt for that same article, and obituaries for Grady and Virginia Honeycutt.

Special thanks to the participants on the Nostalgic Haywood County Facebook page.