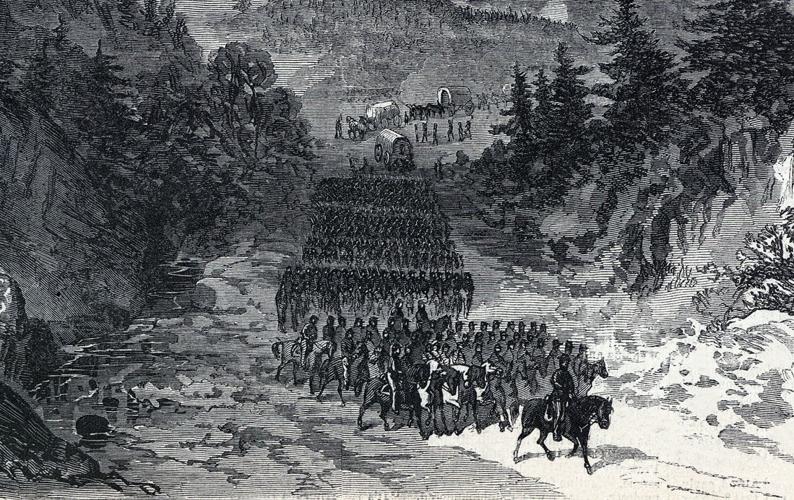 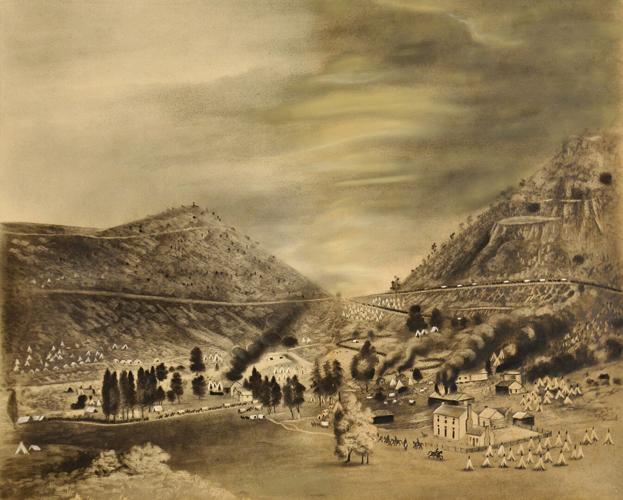 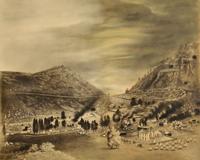 A drawing of Gen Morgan’s withdrawal from Cumberland Gap in 1862. 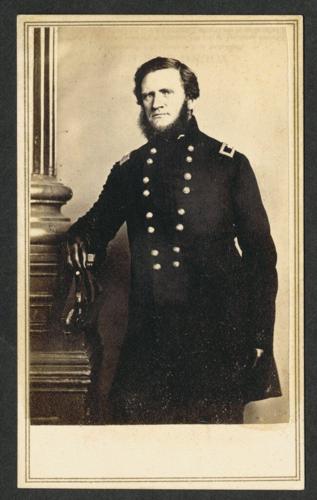 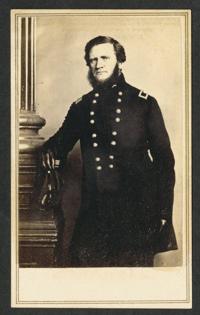 Rather than surrender, Union Gen. George Morgan led his troops on a 250-mile march through the wilderness to evade capture when evacuating Cumberland Gap. 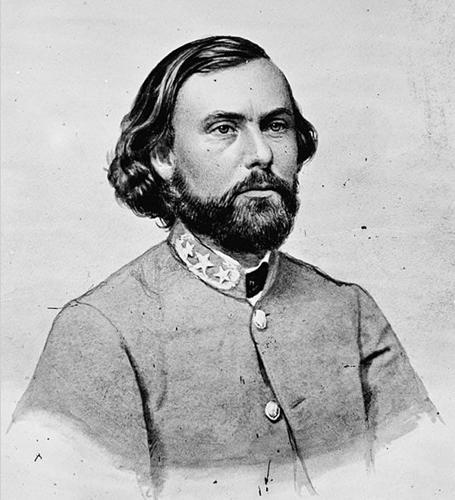 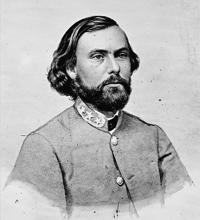 Brig. Gen. John Frazer would be bitterly criticized for the bloodless surrender at Cumberland Gap.

A drawing of Gen Morgan’s withdrawal from Cumberland Gap in 1862.

Rather than surrender, Union Gen. George Morgan led his troops on a 250-mile march through the wilderness to evade capture when evacuating Cumberland Gap.

Brig. Gen. John Frazer would be bitterly criticized for the bloodless surrender at Cumberland Gap.

Second in a series on the 62nd N.C. Infantry, which organized in Waynesville 160 years ago this month.

The 62nd N.C. Infantry, CSA, may not have organized under the most optimistic of circumstances, being mustered after a year of war under the basic warning of “join or be drafted,” but its troops, almost half Haywood County natives, could not have imagined they would be “surrendered,” and that almost all of its deaths would come in a prisoner of war camp.

To call their surrender — one not of their choosing — the Battle of Cumberland Gap, is to label it poorly. For theirs was no battle, a fact some in the 62nd bitterly recalled the rest of their lives.

Cumberland Gap was a key strategic site during the Civil War, yet it exchanged hands three times, and each exchange was relatively bloodless, at least in terms of battle. The gap in the Appalachian chain is located along the Virginia-Kentucky state line, just north of the point where those two states and the state of Tennessee come together.

Years before, it had been the starting point of Daniel Boone’s Wilderness Road into Kentucky. At the time of the Civil War, it was a key pass separating the neutral, later Union, state of Kentucky from the Confederate states of Virginia and Tennessee.

Initially in Confederate hands, the Cumberland Gap was captured by Union Gen. George Morgan in June 1862 when Confederate forces had pulled back to defend Chattanooga. But faced with isolation from Union supply lines, Morgan was forced to abandon the gap that September, engineering an epic withdrawal through enemy territory that saved his troops from capture.

For the next year, Cumberland Gap was controlled by the Confederacy, but in the summer of 1863, Gen. Ambrose Burnside and his Army of the Ohio moved to capture Tennessee and restore it to Union control.

Rather than march directly on Cumberland Gap, Burnside opted to send two divisions of his army over the mountains elsewhere, then have them march on Knoxville. With many Confederate forces diverted to action at Chickamaugua, Burnside faced almost no opposition when he reached Knoxville. With that state, particularly its eastern region, sharply divided in loyalties, many in Knoxville welcomed Burnside’s arrival.

Meanwhile, the 62nd N.C. Infantry was among the 2,300 Confederates holding Cumberland Gap.

On Sept. 7, Burnside marched a brigade 60 miles in 52 hours from Knoxville to the Cumberland Gap, closing a circle of Union forces around it. For the third time, his officers demanded the Confederates surrender.

The gap was under the command of CSA Brigadier General John Frazer. The official account is that Frazer, realizing the Union had outnumbered him on both sides of the gap, decided to surrender, so that the Confederacy lost 2,100 men and a key strategic pass that Sept. 9, 1863.

But was it a clear-cut decision? Many of the troops under the order to surrender did not think so. It would not help that Frazer would later blame some of the troops — including the 62nd — for his decision to surrender.

Many of the soldiers there felt that Frazer could have fought or at least done what his Union counterpart, Morgan, had done the year before and engineered a withdrawal. If a Union general had managed to escape capture and surrender by leading his 7,000 starving forces on 250-mile retreat through Kentucky to the Ohio River, surely these mountain men could find a way to retreat and fight another day.

But Frazer surrendered, and not a shot was fired in the 1863 “Battle” of Cumberland Gap.

Outrage from the 62nd

Not everyone went peacefully. Byron Gibbs McDowell, a Macon County native and the leading officer of the 62nd present at the time, was outraged.

McDowell was the only field officer of the 62nd present when Frazer announced his decision to surrender. Both Waynesville’s Col. R.G.A. Love and Lt. Col. George W. Clayton were ill, with Clayton in a hospital with typhoid in Greeneville, Tennessee.

“The force we had at the Gap was, of course, insignificant when compared with the Federal forces which approached the Gap on both sides when the siege began, but the surrender of the Confederate forces there was a shame and disgrace, when the situation was fully understood,” McDowell later wrote in a history of the 62nd.

“The approaches to the Gap were of such character that it would have been impossible for any number of men to have captured the post by force. The opportunity of General Frazer to have evacuated the Gap and saved his command from a long imprisonment and death … was open, and nothing but treachery, or cowardice, or it may be both, could have led to the unconditional surrender of this, the strongest natural position in the Confederate States.

“When I was told by General Frazer that I had been surrendered and that I and my regiment were prisoners of war, my indignation and that of my regiment knew no bounds,” McDowell wrote.

“I informed him that I would not be made a prisoner of war, that it took two to make such a bargain as that under the circumstances, and that he could not force me to do so. Sharp words were exchanged, and I called up all of the 62nd Regiment who were willing to take their lives in their hands and all of the other commands in the Gap who were willing to join us, and said to them, ‘If you will go with me, we will go out from here, and let consequences take care of themselves.’”

McDowell and about 180 of the 62nd were among those who defied the order to surrender and who escaped through the mountains to fight again. Historians’ estimates of the total number who escaped surrender range from 300 to 600. McDowell’s remnant camped for several days along the Pigeon River in Haywood County, then returned to active service under Palmer’s Brigade.

Frazer’s defenseFrazer’s decision to surrender was later called a “shameful abandonment of duty” by Confederate President Jefferson Davis. However, perhaps not all the blame could be laid on Frazer.

His orders had been to hold the gap at all costs, and historians say there had been no plans made for the possibility of siege or retreat. Therefore, Frazer may have tried to hold out, rather than abandon the gap, when he could have retreated.

He also received conflicting orders, first to hold the gap, then to retreat, then to hold it. However, the general’s written attempts to defend his decision in 1864 only increased the bitterness against him, as he seemed to blame his troops for the decision.

Frazer accused almost every regiment under him of being undisciplined or suffering from incompetent leadership.

“The 62nd North Carolina Regiment was very indifferent, being badly disciplined and badly drilled,” Frazer wrote. “The colonel was absent; soon after resigned and became an open advocate of reunion in his county.” (Col. Love was absent but was suffering from illness that plagued him throughout the war.)

Frazer also took a dig at McDowell, perhaps because of his strong opposition to surrender, adding “the major was in command of the regiment which he had surrendered a few months before at East Tennessee to a gang of Yankee raiders, who had paroled officers and men.” In fact, 250 had been captured while guarding railroads — by a Union force of 3,000.

The accuracy of Frazer’s account can also be questioned in his claim that he had about 450 men for duty in the 62nd. Given that 442 were surrendered as prisoners of war and around 180 escaped, the unit would have been at least 600 strong.

The general’s comments against the 62nd were bitterly disputed by McDowell.

“There was no insubordination among the troops of the Sixty-second North Carolina Regiment as far as I know, and had there been I certainly would have known it. Furthermore, there was no want of courage, discipline or determination among the men,” he wrote.

“We expected the battle to come on every moment, and at no time during the whole war did I ever see, or know, men more disappointed than these were when they found that they were surrendered with an exhibition of their courage. Stalwart men actually cried like children when they found that they were surrendered and had to submit to being made prisoners without defending their right and reputation.”

Next week: The horrors of life as prisoners of war.

Sources include: Emergingcivilwar.com, The Great March From Cumberland Gap; thomaslegion.net, 62nd North Carolina Infantry Regiment, which includes the written history of the 62nd by Major McDowell; Report of Brig. Gen. John W. Frazer, written from Fort Warren, then an officer POW camp, regarding the surrender of Cumberland Gap.

This offer is currently unavailable.