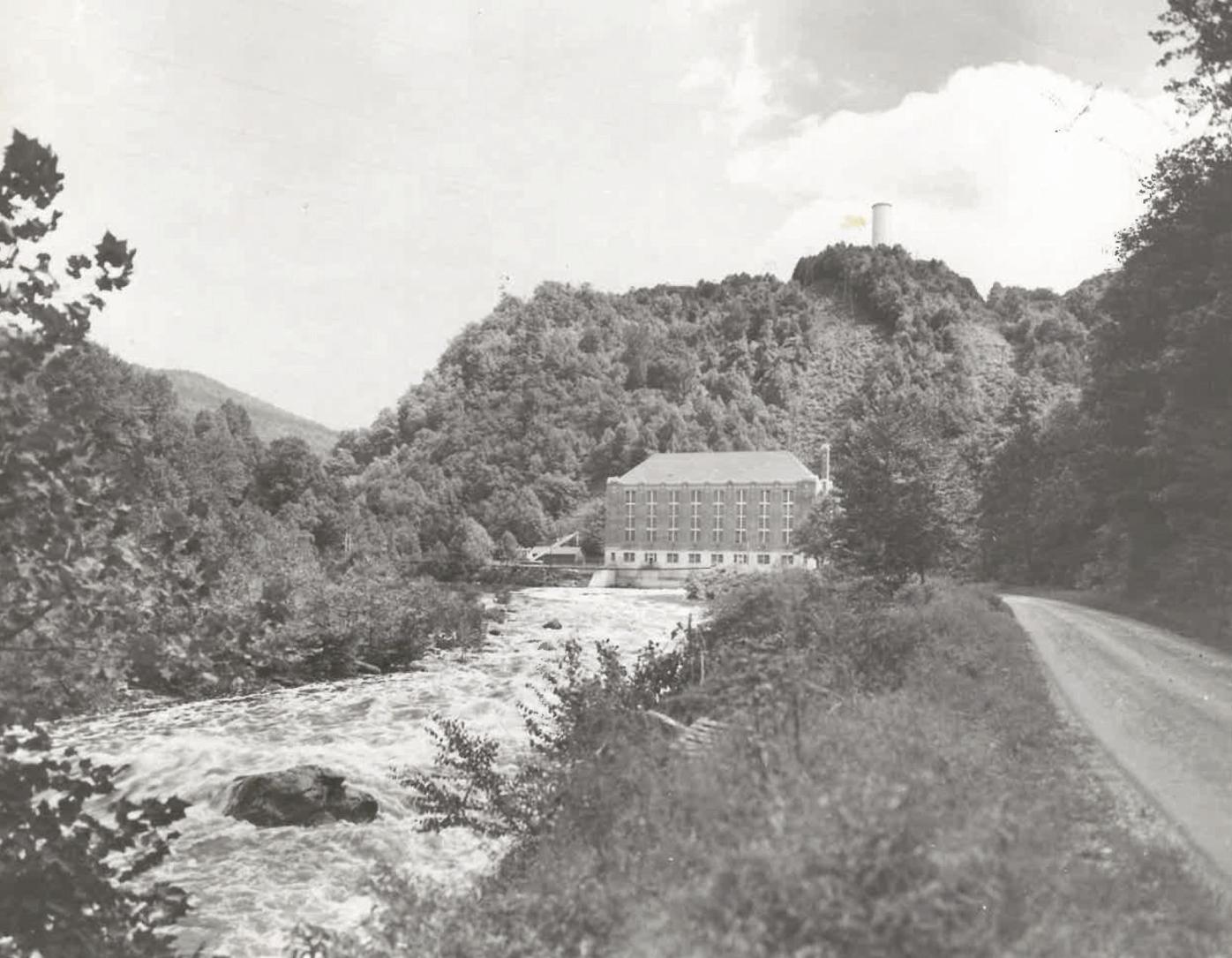 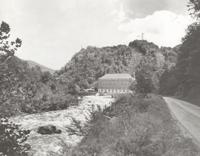 The Walters hydro plant is shown in this file photo likely taken in the 1930s. 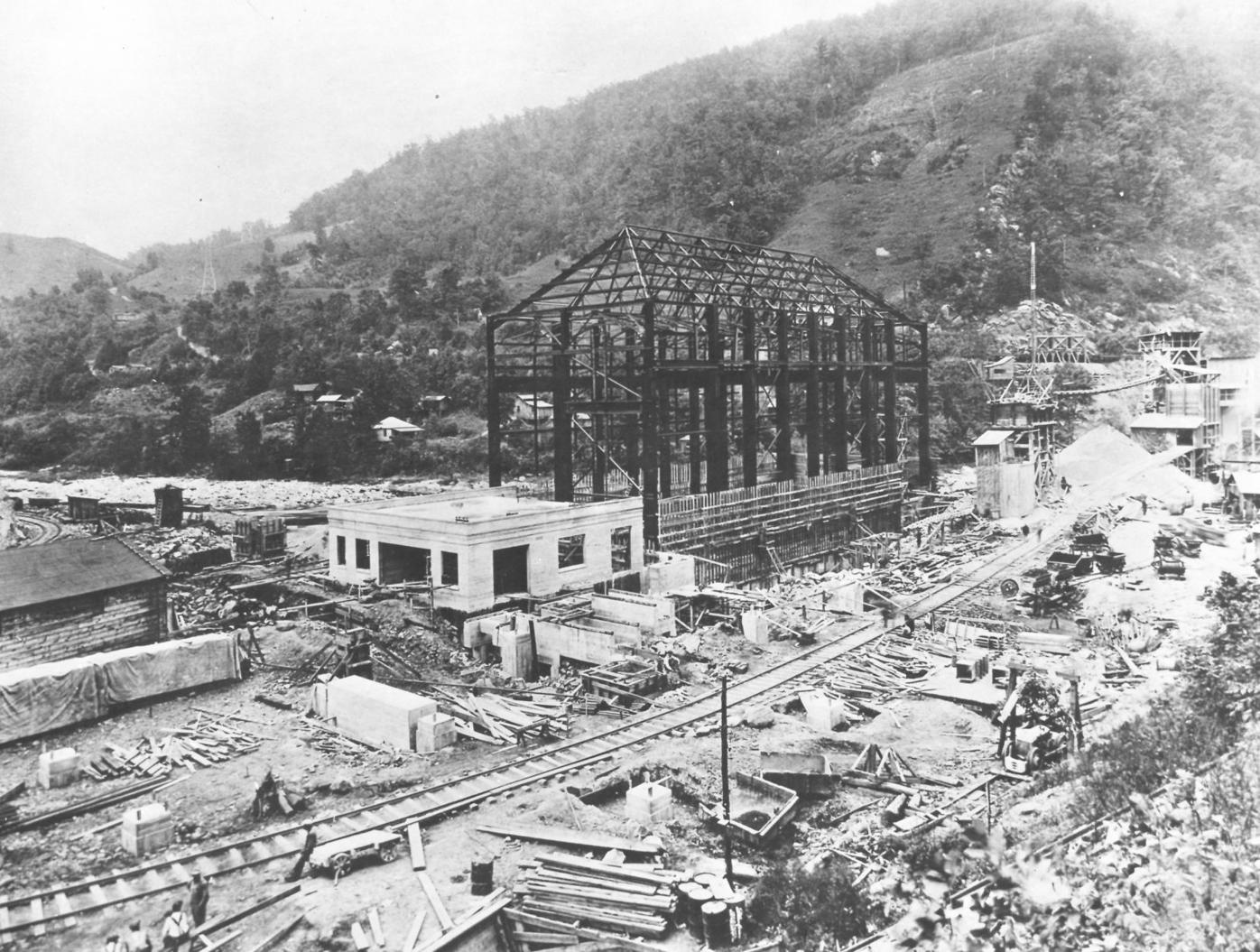 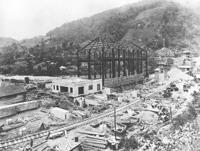 UNDER CONSTRUCTION — This shows the CP&L power plant in 1928 when it was being built. This photo was taken from behind the plant, facing down river. 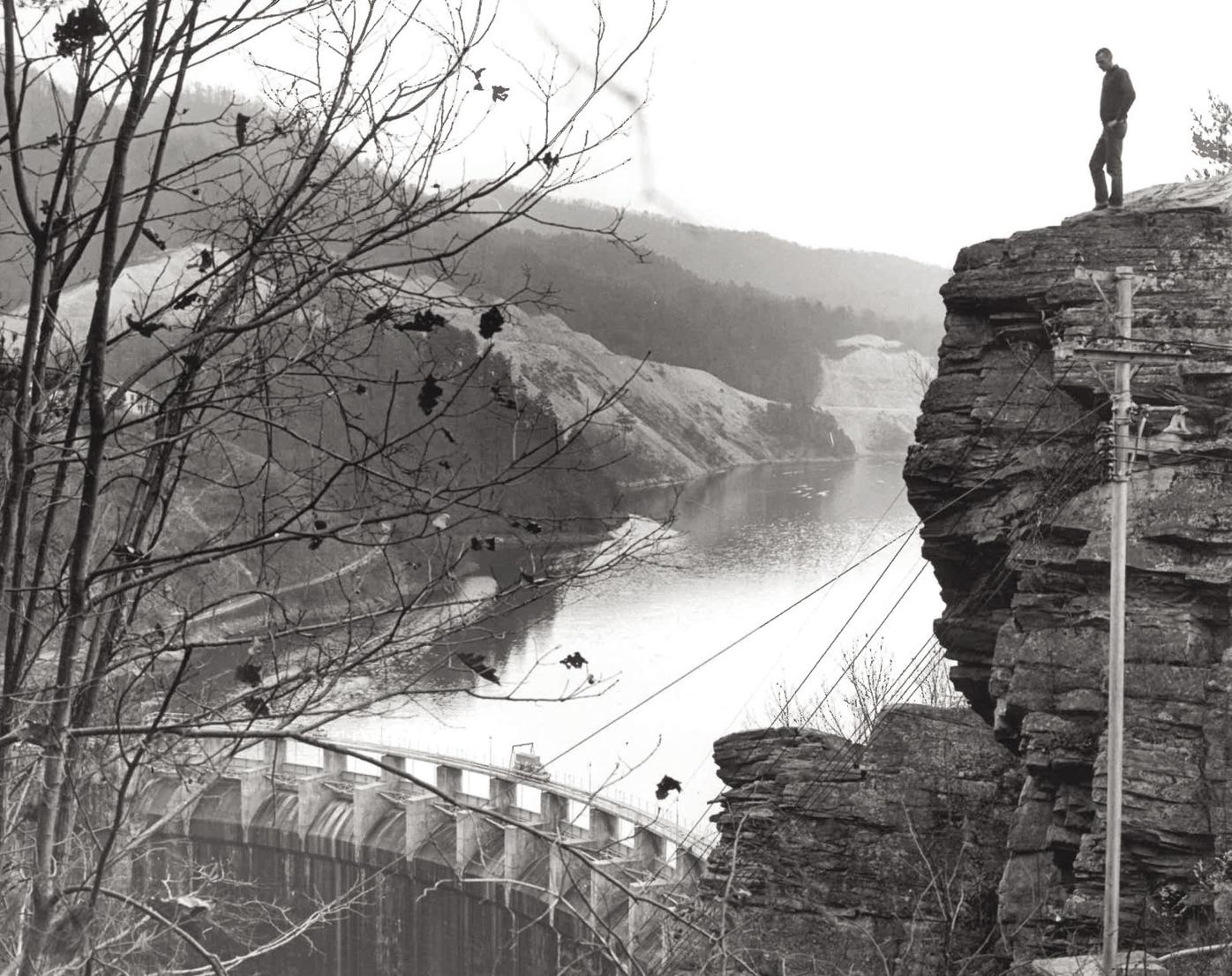 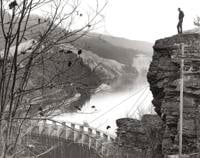 WALTERS DAM — This file photo, taken in the late 1950s, shows the steep terrain of the Pigeon River Gorge. The ruggedness made the area ideal for a hydroelectric facility, but railroads had to be built an additional five miles to get materials to the site. 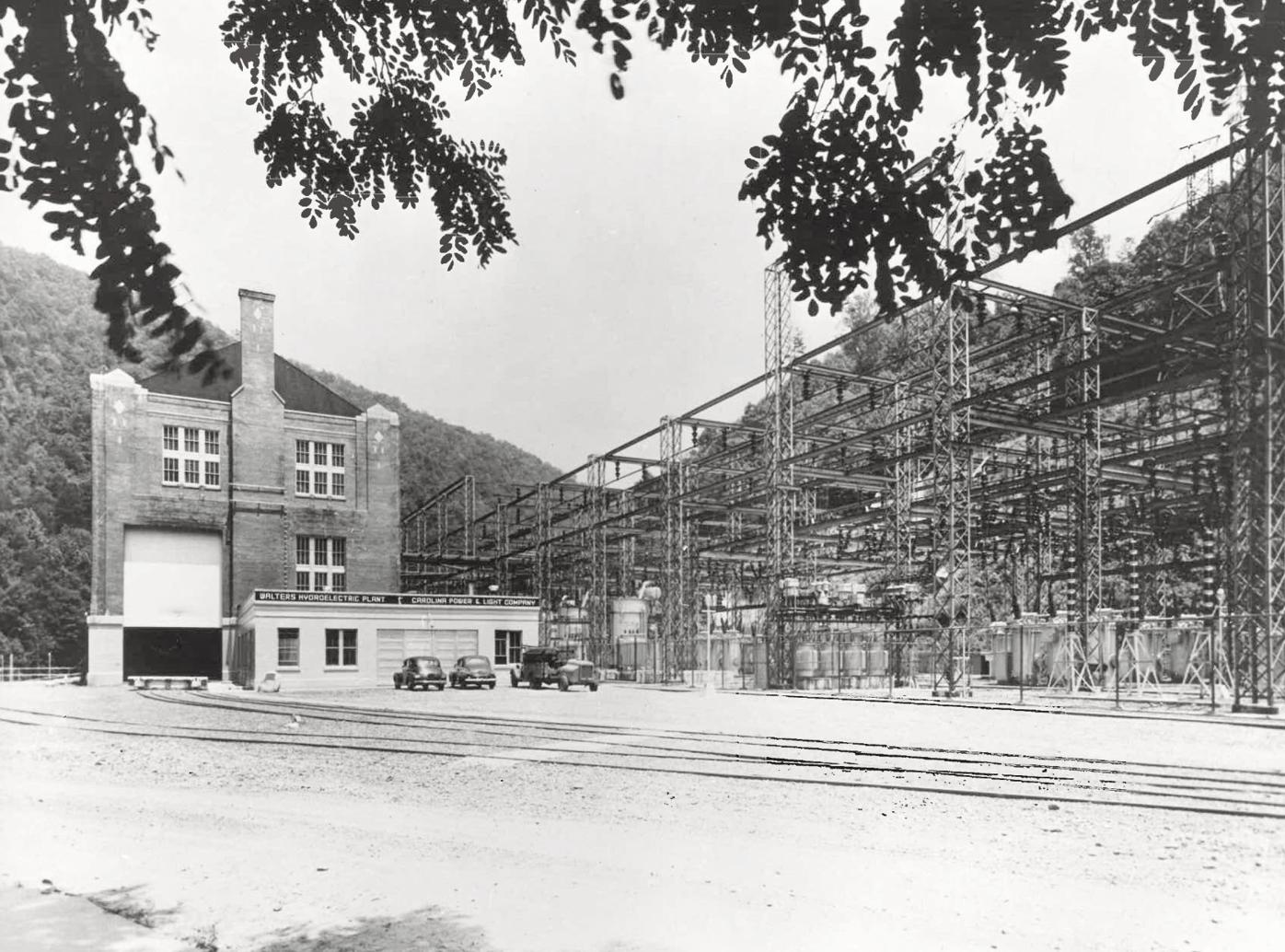 UNDER CONSTRUCTION — The waters of the Pigeon River were rerouted in the late 1950s from the gorge behind the plant into a 6-mile tunnel. A surge tower, far right top, was built to manage sudden changes in water flow. 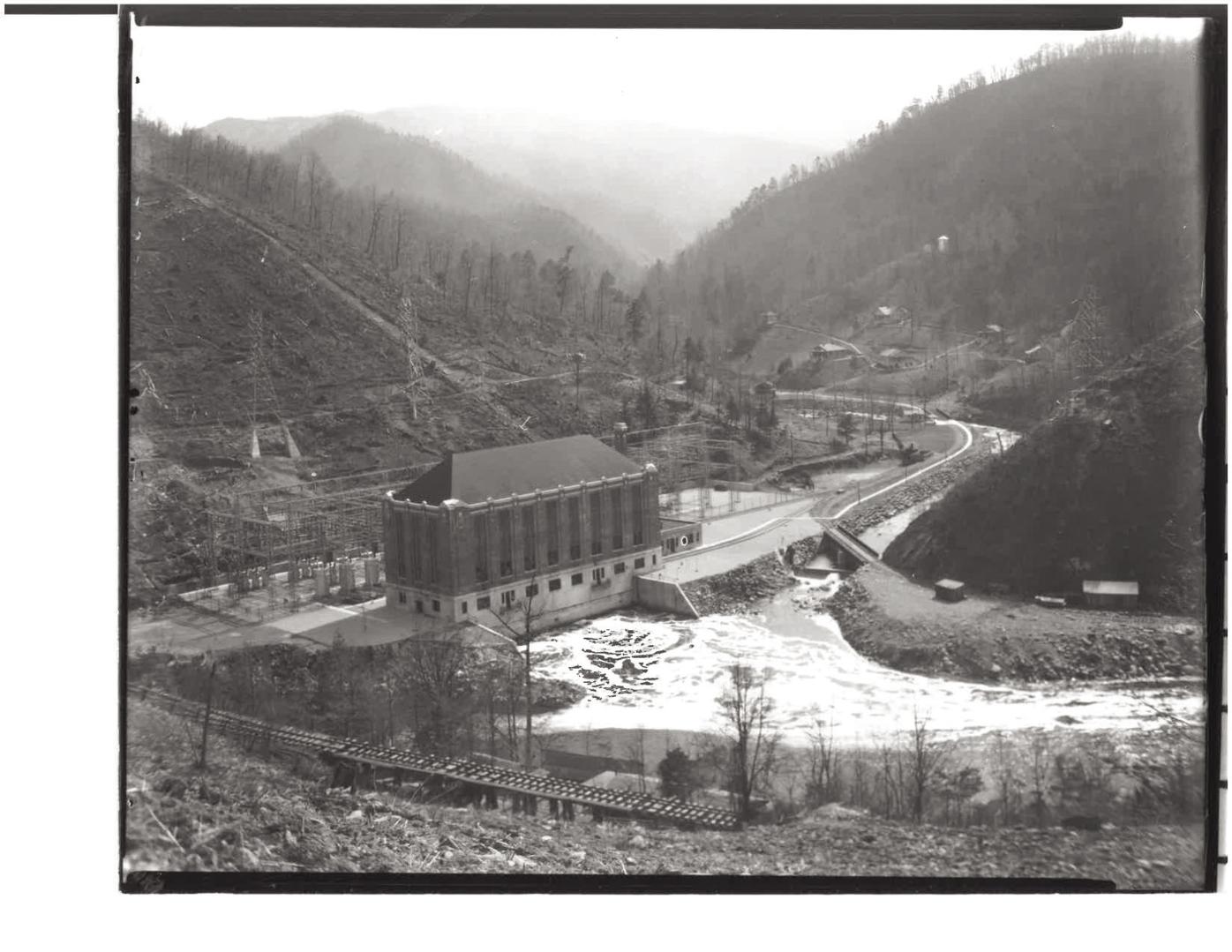 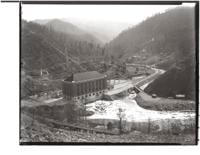 The Walters hydro plant is shown in this file photo likely taken in the 1930s.

UNDER CONSTRUCTION — This shows the CP&L power plant in 1928 when it was being built. This photo was taken from behind the plant, facing down river.

WALTERS DAM — This file photo, taken in the late 1950s, shows the steep terrain of the Pigeon River Gorge. The ruggedness made the area ideal for a hydroelectric facility, but railroads had to be built an additional five miles to get materials to the site.

UNDER CONSTRUCTION — The waters of the Pigeon River were rerouted in the late 1950s from the gorge behind the plant into a 6-mile tunnel. A surge tower, far right top, was built to manage sudden changes in water flow.

An engineering marvel snakes alongside Interstate 40 through the Pigeon River gorge, a power plant remarkable for any age, but especially in the time it was built.

Walters Lake and the power plant below it now belong to Duke Energy, but almost 100 years ago, it was Carolina Power & Light that conceived the idea of building a massive electric power facility in some of the most rugged territory in Haywood County.

How rugged? Before the power company could build the 180-foot-high dam that would hold back the waters of the Pigeon River, it would have to build a railroad to haul in its workers and materials. There was no road to give easy access to the construction site, especially not from the rest of Haywood County. The cheaper solution was to extend an old logging railroad line five miles up the gorge.

Carolina Power & Light was not the first to provide power from the Pigeon River. In 1906 Haywood Electric Power Company, Hepco for short, constructed a dam on the Pigeon near the mouth of Fines Creek.

Benjamin Sloan, owner of the White Sulphur Springs Hotel organized the company with Sam Welch and Thomas Stringfield to obtain a consistent power supply for his tourist hotel. The Hepco dam, built of granite stone and mortar, provided the water flow to power a 1,300-volt generator. Transmission lines were routed up the river to Jonathan Creek, through Iron Duff and into Waynesville.

Hepco may have been a key player in luring Haywood’s largest manufacturer. When industrialist Peter Thomson was looking for a site to build a paper mill, Sloan offered to supply the electric power if he would locate the mill in Canton or Clyde.

Thompson constructed the Champion pulp and paper mill in Canton, and in its early years, Hepco could also generate enough power to sell some to a company in Newport, Tenn.

Its challenges were also ample warning to those who would try hydropower on a bigger scale. The power plant equipment had to be hauled to the dam by wagon in a trip that took two days and sometimes required several teams of horses. The late Louise Sloan, whose husband was one of Sloan’s grandsons, told of family stories about having to shift from one side of the wagon to the other on trips to the plant, to keep from overturning in deep ruts.

By 1920, however, Hepco was having problems. The lake basin behind the dam had become choked with debris which lowered the water capacity and damaged equipment. Sloan died in 1922 and the company was recognized into the Smoky Mountain Power Company, but when CP&L started construction of the Walters plant, the local company sold out.

The year after Sloan died, the Asheville Power & Light Company, soon to become Carolina Power & Light, began studying the gorge for a massive hydroelectric power plant. The same thing that had drawn Sloan to build his Hepco dam on the Pigeon, the deep gorge that made up the river’s sides, drew the attention of the Asheville company and its engineers.

The company spent the next three years getting a temporary permit to explore the issue, surveying the land, leasing and buying property and designing a power plant.

“Twelve Million Dollar Power Development Plans for Haywood County,” declared The Waynesville Mountaineer in January of 1926. The power company was ready to submit plans to the Federal Power Commission. “The great hydroelectric plan contemplated would exceed 60,000 kilowatts and would probably not be surpassed by any power development in the south of this kind,” stated the article, reprinted from the Asheville Citizen.

The idea the power company proposed was staggering. It would build a 180-foot dam near the mouth of Cataloochee Creek. A 6.2-mile tunnel would be carved and blasted through the mountain where it would end at a power generating plant just inside the North Carolina state line.

Water would enter the 14-foot-wide horse-shoe-shaped tunnel near the dam. Its journey down the first four miles of the tunnel would be a slight, .28-percent grade.

Then the tunnel would plunge 552 feet straight down before resuming a slight downhill run for the last two miles, dividing into three penstocks near the power house where it would encounter the turbines.

On the last steep knoll above the power plant, a surge tower would be built that would stand 180 feet high, atop a concrete shaft cut 600 feet down and connecting to the tunnel. The surge tower would be a guard against sudden changes in the flow and pressure of water, a massive release valve to allow water to surge up the shafts and tunnel and wash down its sides, if needed.

It took workers a year to build the rail line to the dam site. Though the tunnel would run 6.2 miles under the mountain from the dam to the power plant, the route the railroad would take was along the river and the gorge.

In addition to building the railroad, the power company and contractor built separate work camps for crews working on the dam, the powerhouse and the tunnel.

A more permanent village was built near the powerhouse for the workers in the isolated region, including a clubhouse, schoolhouse, boarding house, and post office. Permanent homes were also built near the dam, so that employees could always be on site.

The late Wilbur Teague, born in 1927, grew up around the dam, for his father, Joseph, was a rigger foreman and later maintenance supervisor at the site. Wilbur, in turn, spent 28 years as supervisor, working 45 years at the dam in total. The story of his father getting work at the dam was one of many Wilbur liked to tell: In 1927, rock that was blasted out of the tunnel was hauled out the tunnel’s head gate near the Cataloochee Creek cove, then hauled across the lake on cable, transported by railcar to a rock crusher and used in the cement for the dam.

One day the cable system broke down. When workers could not repair it, a county deputy suggested sending for Joe Teague. Teague had the system running again within hours. The company hired him full-time, and he worked at the dam until 1957.

The diary of Noah Baxter, a carpenter and job foreman working on the power plant, gives glimpses into workmen’s lives during the construction of the dam and the power plant.

In March of 1927, Baxter and his crew built a temporary camp for workers, repaired one bridge and built two more. In April, they built another four bridges, began building another work camp and cut and skidded out timber. The next month they built a mess hall and store house, built a depot in a single day and constructed a powder house, among other projects.

Baxter spent much of the year constructing workers’ villages. In August of the next year he was working on the project itself, building forms for a crusher plant that broke the granite blasted out of the tunnel, pouring concrete for the crusher foundation, and cutting rings for the tunnel.

Over the next year his journal included these entries and more: “the steel workers now putting in no. 19 tube of steel for penstock no. 3” “…visit in tunnel at Sterling Creek, about 60 feet under solid rock” “… drilling penstocks of tunnel at Waterville … distribute heating stoves to bunk house … caulk spillway … finish spillway, 6 foot deep, 15 food wide, 350 feet long … third deck of crusher building (is) up … made tunnel wedges … began excavation for concrete mixing plant …

In November of 1929, his entries show that work was nearing completion. “Raining. River begins to rise. Dam is full … river rising rapidly on account of rain and raising one or two flood gates on dam.”

“Finish forms of spillway at Sterling Creek. Crusher torn down. Rode across on cable on a load of crusher junk.”

“Saw a boat going up on a flat car toward the dam — guess there’s to be joy-riding on the lake.”

The CP&L plant began providing electricity in 1930. For many men, their work there was completed. For a few, the adventures were just getting under way.

In next week’s story, the dangers and adventures of working for CP&L at Walters Lake and Waterville.

Sources for this story include past editions of The Mountaineer, among them a feature on Wilbur Teague, 10/22/1998, and a story on Hepco, 3/27/1998. Other sources: “A Guide to the Historic Architecture of Western North Carolina by Catherine W. Bishir, Michael T. Southern & Jennifer Martin; Kathy N. Ross’ own visits to the power plant as a member of the Pigeon River Board. Excerpts of Noah Baxter’s work journal were published by Junior and Helen Ball in their “History of Mt. Sterling, N.C. and its People, Volume II.”

The Walters Dam hydro-electric would be a massive undertaking today, but was an engineering marvel in the 1930s when it was built.