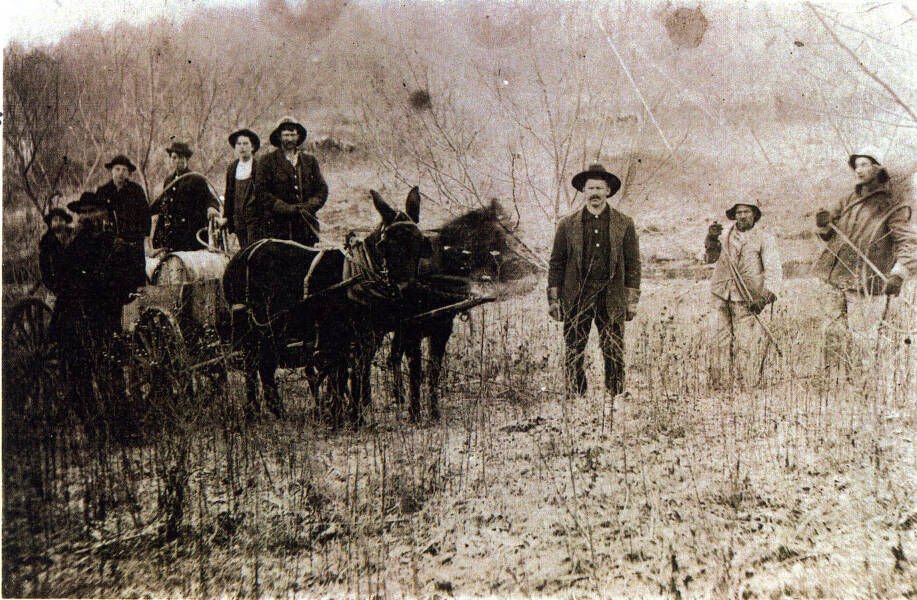 This photo shows John Rhinehart, center, with mustache, who would become the first full-time foreman of Barber’s Orchard, with a work crew at the orchard. The photo is dated 1903 and would have been taken during the first years of planting trees. 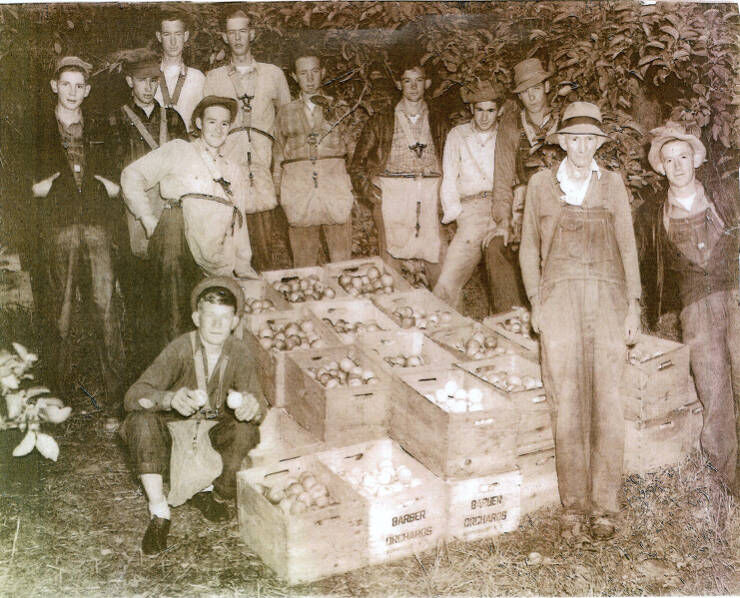 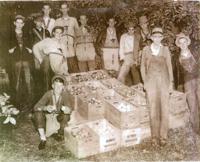 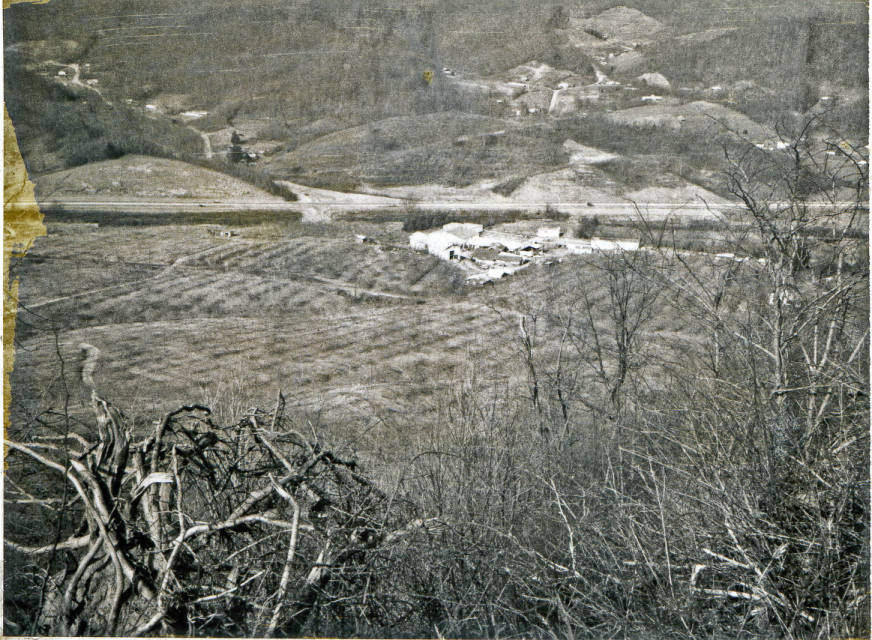 Barber’s Orchard as seen from the mountain above, in the 1940s. 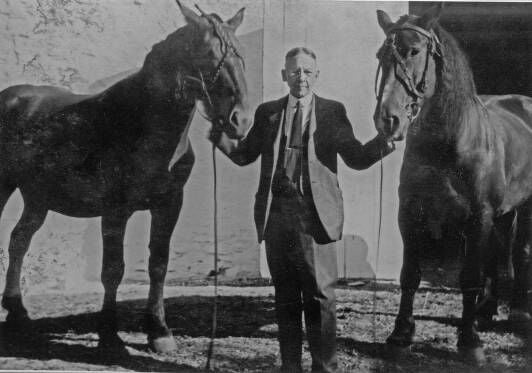 Richard Barber, Sr. continued his business travels as he developed the orchard. He is shown here with two horses used at the orchard. 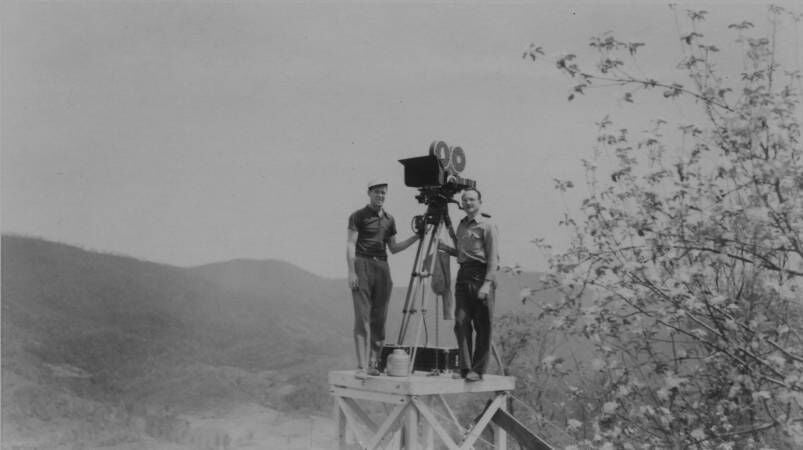 Dick Barber, Jr., is shown at right on a platform erected for filming. The 1955 movie, “I’d Climb the Highest Mountain,” shot some of its scenes at Barber’s Orchard.

This photo shows John Rhinehart, center, with mustache, who would become the first full-time foreman of Barber’s Orchard, with a work crew at the orchard. The photo is dated 1903 and would have been taken during the first years of planting trees.

Barber’s Orchard as seen from the mountain above, in the 1940s.

Richard Barber, Sr. continued his business travels as he developed the orchard. He is shown here with two horses used at the orchard.

Dick Barber, Jr., is shown at right on a platform erected for filming. The 1955 movie, “I’d Climb the Highest Mountain,” shot some of its scenes at Barber’s Orchard.

What does it take for an orchard to survive more than a century, through multiple owners and a surge from horse and buggy days to the digital age?

Clues show up in the history of Barber’s Orchard.

There’s a work ethic, a relationship between farm owners and work crews, a willingness to change and innovate. And perhaps most vital, there is love — love of farming, of a relationship with the land and trees, that the history of this place reflects, despite the struggles for its survival. Today, Barber’s Orchard tradition thrives under the ownership of Benny and Jane Arrington. Locals and tourists alike flock to the fruit stand this time of year to select apples and breathe in the scent of apple cakes and other delights that permeate the long building along Saunook Road in southwestern Haywood County. Some of those customers are third or fourth generation to visit the site, which includes the original rock building, to purchase their apples and create memories.

And the memories of Barber’s go back more than 120 years. Its story actually began far from here, at the Geneva Agricultural Experiment Station in New York. North Carolina native Richard Barber, Sr., a sales representative for McCormack and Deering, visited the station and was so impressed with its apple production that he purchased land in the Saunook community of Haywood County in 1890 and began planting trees around 1903.

A community history of Saunook written in 1976 dates that move as being in 1901. Soon after, Richard Sr. moved his family from New York, building a home about six miles away, near Waynesville, where he was also setting up a small “house” orchard. But often during apple seasons, he and his family would live at the orchard.

Apples were already being grown in Haywood County, particularly in Saunook and the Cataloochee regions. There were two practical reasons; before the age of electricity, they were a fruit that could be preserved in cellars for a long time, and the mountain climate made it ideal for their production. Richard Barber accelerated apple production, however, building storage buildings, having telephone lines installed, continually exploring new varieties and techniques. All this while continuing his business travels. Dick Sr., as he was known, hired a foreman to manage the orchard during his travels, awaiting the day his son, Dick Jr., would be old enough to take over.

When when Dick Jr. was 23, he did take over — in 1929, the same year the country plunged into the Great Depression. He weathered the Depression, and many years of freezes and crop losses, for the years of profit.

“It’s a long-term venture,” Dick Jr. said in 1999, looking back on his career. “You’ve got to accept freeze-outs and hailstorms I went through times of four of five years where I’d lose money every year, but that’s the life of an apple grower.”

When the younger Barber took over, the orchard consisted of 120 acres, he said. When he sold it in 1979, he had more than 400 acres in trees. He began with 26 mules and eight or 10 wagons for hauling the apples, he recalled. He started with 10,000 trees in production and when he sold 50 years later, the orchard had 30,000 trees bearing apples. With the cold storage system he installed, Dick Jr. was able to move away from old-timey varieties with their thick skins that help preserve the quality, and experimented with new kinds like Golden Delicious and Galas, whose popularity is now being challenged by newer kinds, such as Honeycrisp.

Dick Jr. sold in the orchard in 1977 to Glenn and Gerald Stewart, of West Palm Beach, Florida. At age 72 he was ready to try new things. He retired to travel and tend the smaller orchard at his home, though he eventually sold it, as well. He died in 2003, still tending a few apple trees and the roses around his home, until a year before his death.

The Stewart brothers launched into the orchard with the enthusiasm of its original owners, continuing to innovate, try new varieties, and launching a bakery. But they were victims of terrible timing, a combination of high interest rates on loans in the 1970s, and a series of freezes, frosts and hailstorms that led to seven consecutive crop failures. In 1988, the mortgage holders foreclosed, and the Federal Land Bank became holder of the 400-plus acres.

And there the story might have ended, with the parceling of Barber’s Orchard. Some sections became housing developments. But one apple grower, Benny Arrington, bought a portion of the original orchard. And one former owner, Glenn Stewart, worked out a way to hold onto the iconic Barber’s Fruit Stand, with its bakery.

In March 1993, Benny and Jane Arrington purchased the fruit stand, selling their apples, and its popular baked goods, at the same site Dick Barber, Sr. had purchased just over a century before, with the dream of selling apples. Almost 30 years later, that business is thriving, with its baked goods shipped nationwide — but only between Thanksgiving and Christmas — and its owners selling all they produce from its center.

Next week: Louise Corbin, whose husband was foreman at Barber’s Orchard for 40 years, talks about her life in the orchard and development of its famous apple cake. And the Arringtons discuss surviving challenging times as apple growers and learning how to successfully market their own products.

Sources for this story include multiple stories on Barber’s Orchard in The Mountaineer, particularly interviews with Richard Barber, Jr., in 1995 and 1999.