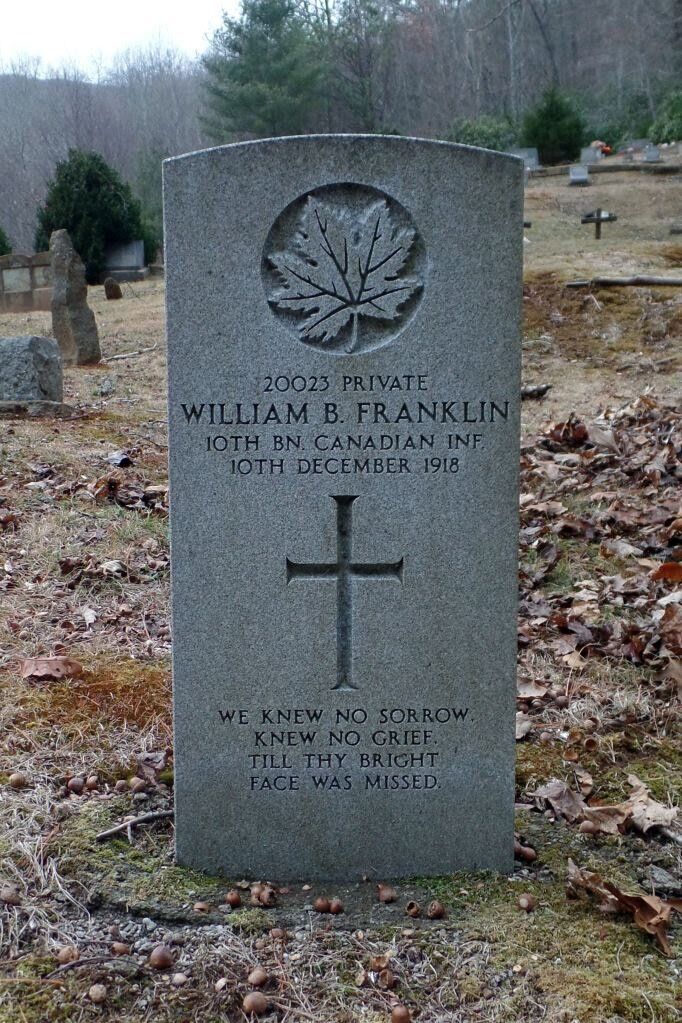 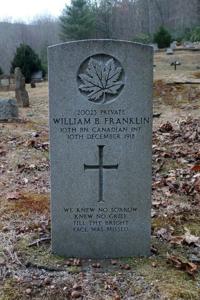 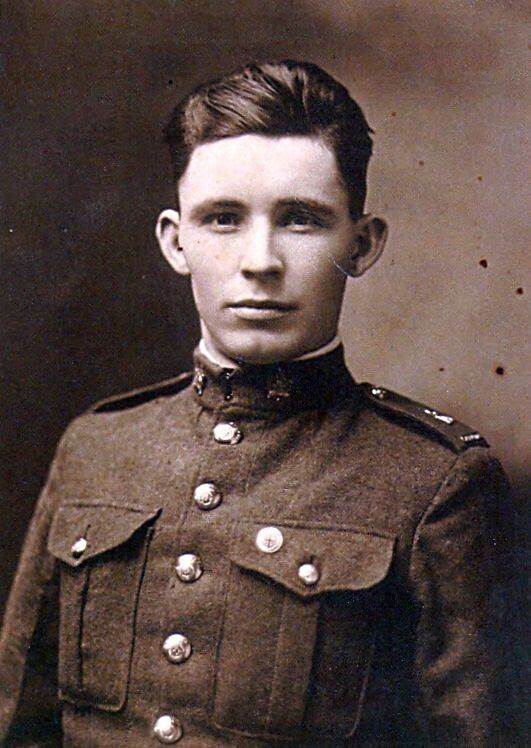 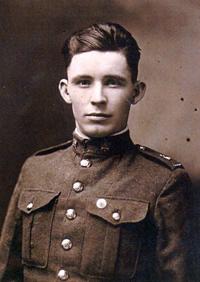 CALL OF DUTY — William Baxter Franklin died of bone infection caused by his wounds. The Haywood County native volunteered for service in Canada before the U.S. had entered World War I.

CALL OF DUTY — William Baxter Franklin died of bone infection caused by his wounds. The Haywood County native volunteered for service in Canada before the U.S. had entered World War I.

Few young men may have been so eager to get into World War I as Baxter Franklin, and few may have suffered as he did over the three years that followed.

The Haywood County native lied about his age to enlist in the Canadian Infantry and quickly entered into combat. Two years after falsely being reported as killed in action, Franklin returned to Haywood County, but would die months later of the wounds that had crippled and deafened him. Today, his grave above Lake Logan is the only First World War casualty in North Carolina that is memorialized with a marker from the Commonwealth War Graves Commission, which marks the graves of those who died in the First and Second World Wars, fighting for the British Commonwealth.

Franklin’s story was researched and written by Nick Metcalfe during the period marking the centennial of World War I. It can be found at the website ww1sacrifice.com.

William Baxter Franklin was born in the Pigeon Township in November 1896, the fifth of six children of John Baxter and Minnie Francis Penland Franklin. When Franklin’s father died three years later, Minnie Franklin could not care for the children, and they went to live with her parents. The children and grandparents moved to Medicine Hat, Alberta, Canada, in 1902. In 1910, Franklin was back in Haywood County, working as a farm hand, but moved back to Canada in 1912, where he worked as a teamster in Saskatchewan, near where his brother Charles had purchased land. He was only 15.

War broke out in Europe at the end of July 1914. Franklin enlisted very soon after, on Sept. 27. He was 17, and lied about his age, claiming he had been born in 1894. He joined the 10th Battalion, Canadians, and shipped out for England two days later. After training there, the Battalion landed in France in February 1915. In April, its members reached the French-German line east of Ypres, where they fought in the horrific battle of Gravenstafel Ridge. Out of a little more than 800 men, only a few over 100 were able to march out during the withdrawal.

Whether Franklin was injured at Gravenstafel or in later engagements is not known, but in 1916, reports that he had been killed in action reached his mother, who lived at Sunburst, according to later newspaper stories. It is not known how long it took to correct that information. Franklin was evacuated to a hospital in England in 1916 and diagnosed with septicemia, a severe bacterial infection. He returned to Quebec in November, where he was hospitalized in Toronto.

Over the next 18 months he would stay in four different Canadian hospitals, and by January 1918 would be diagnosed with severe bone infection. In April 1918, on furlough from the hospital, Franklin visited Haywood County.

“About two years ago he was in a terrible battle in France and was wounded in several places by shell fragments and has lost his hearing,” The Carolina Mountaineer/Waynesville Courier reported on April 18. “He is only 20 years old and will likely go on crutches the balance of his life. It will probably be necessary to remove his leg and possibly an arm.”

By November, the bone infections were spreading. Franklin had infected bone removed from his left hip. “Although seeming to improve in the next few weeks, he succumbed to his illness at 7 p.m. on 10 Dec. 1918, aged 22,” Metcalfe wrote. “His body was returned home and he was buried in the family plot on the western side of Sunburst Cemetery, also known as Lake Logan Cemetery.”

(Thanks to Nick Metcalfe for permission to use his information, and to Randy Inman/Nostalgic Haywood County for drawing attention to this story.)