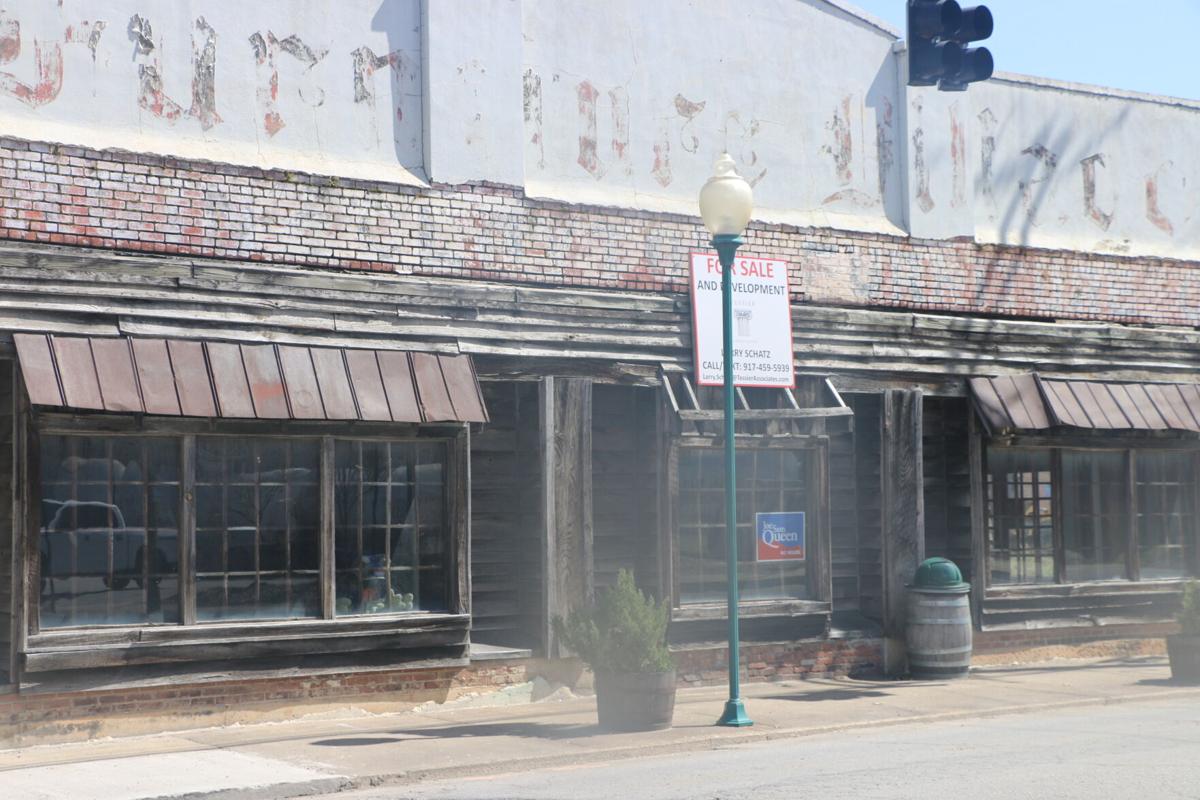 FOR SALE — This spacious building at the intersection of Depot and Commerce streets is being marketed by Tessier Associates. 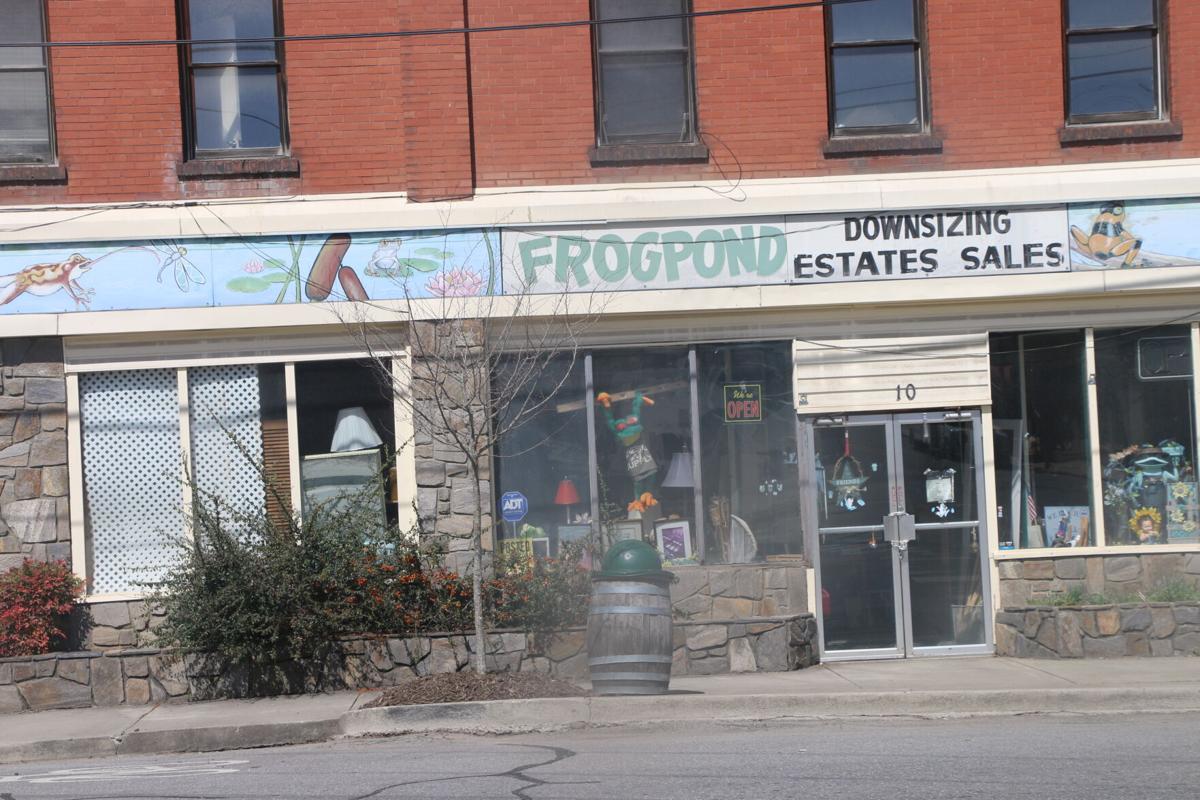 EMPTY — The Frog Level building that once housed several businesses has been shuttered for more than a year. 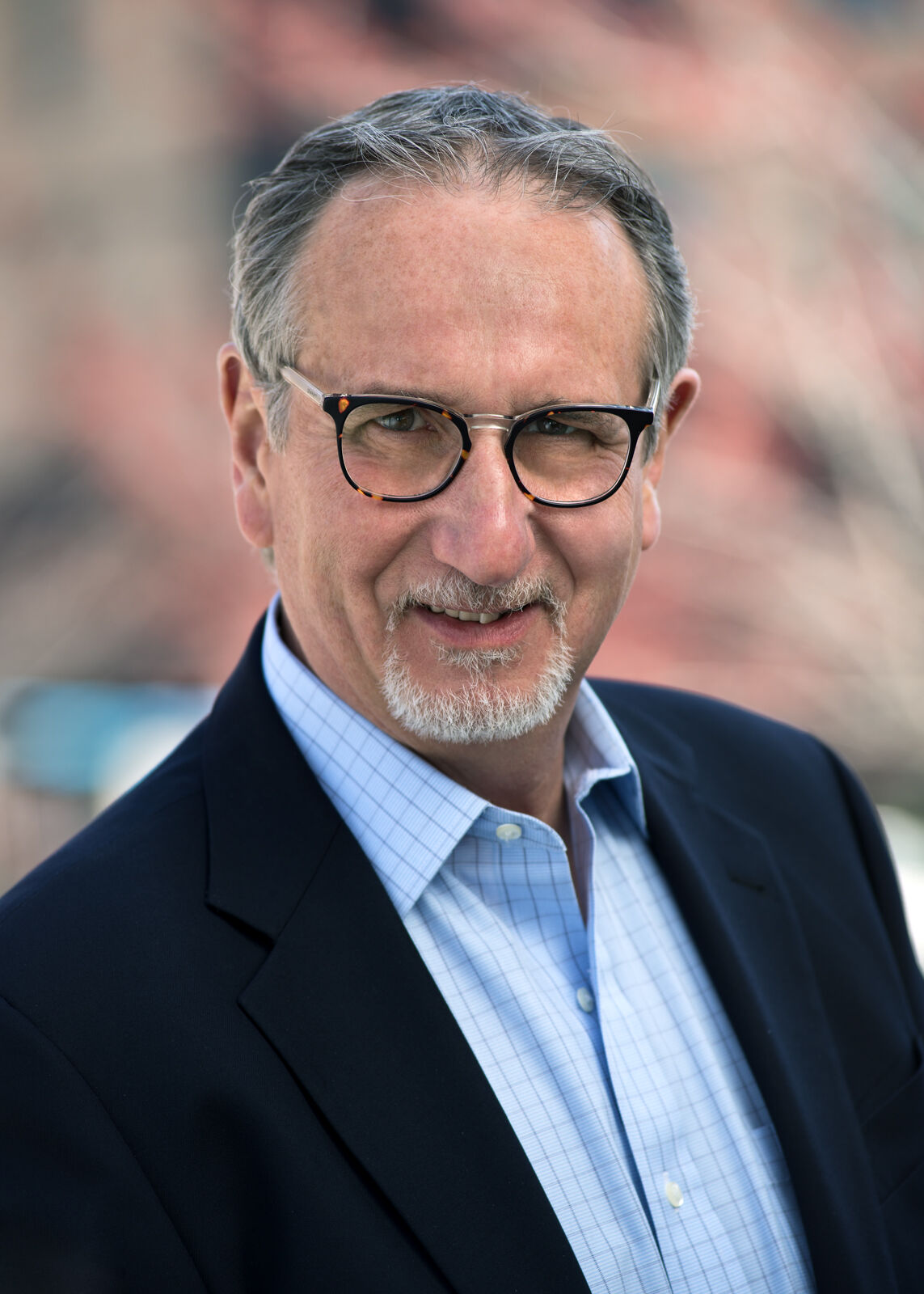 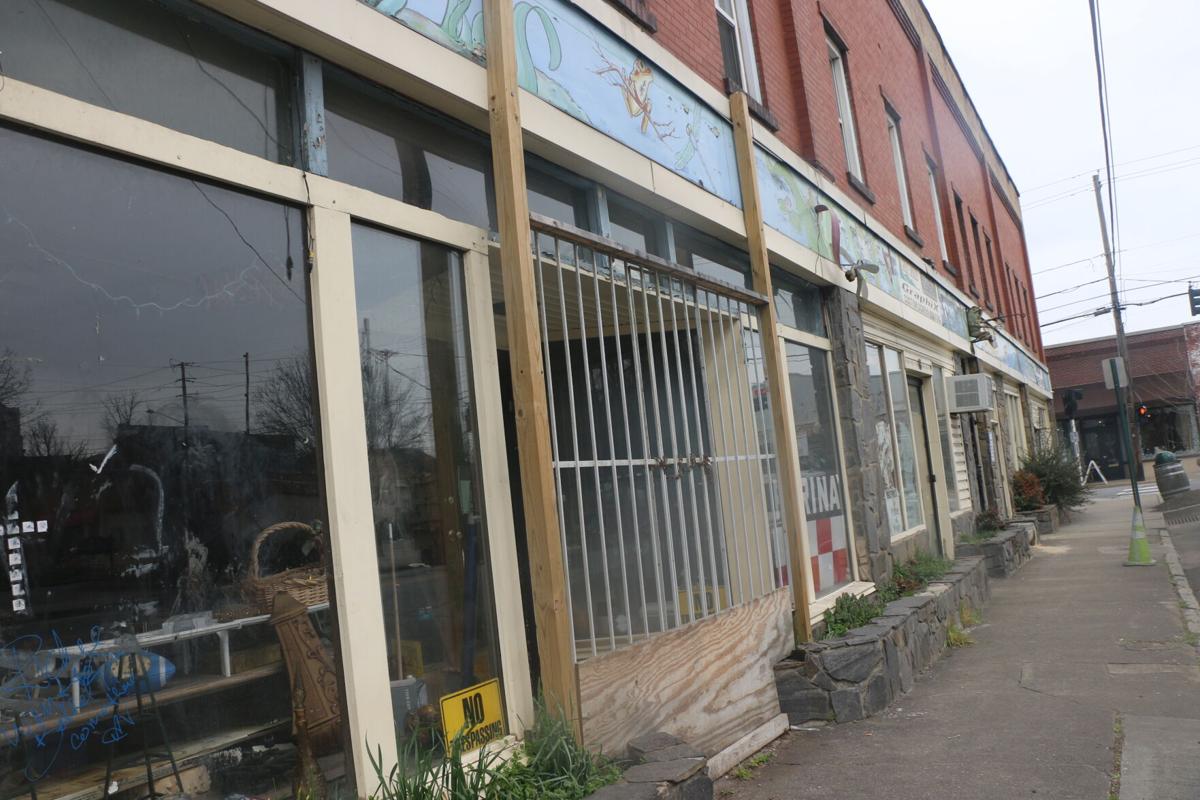 FROG POND ESTATE — A building owned by Jack Wadham is so spacious it has two addresses attached to it. The building has long been vacant and has bars on some of the windows and doors. 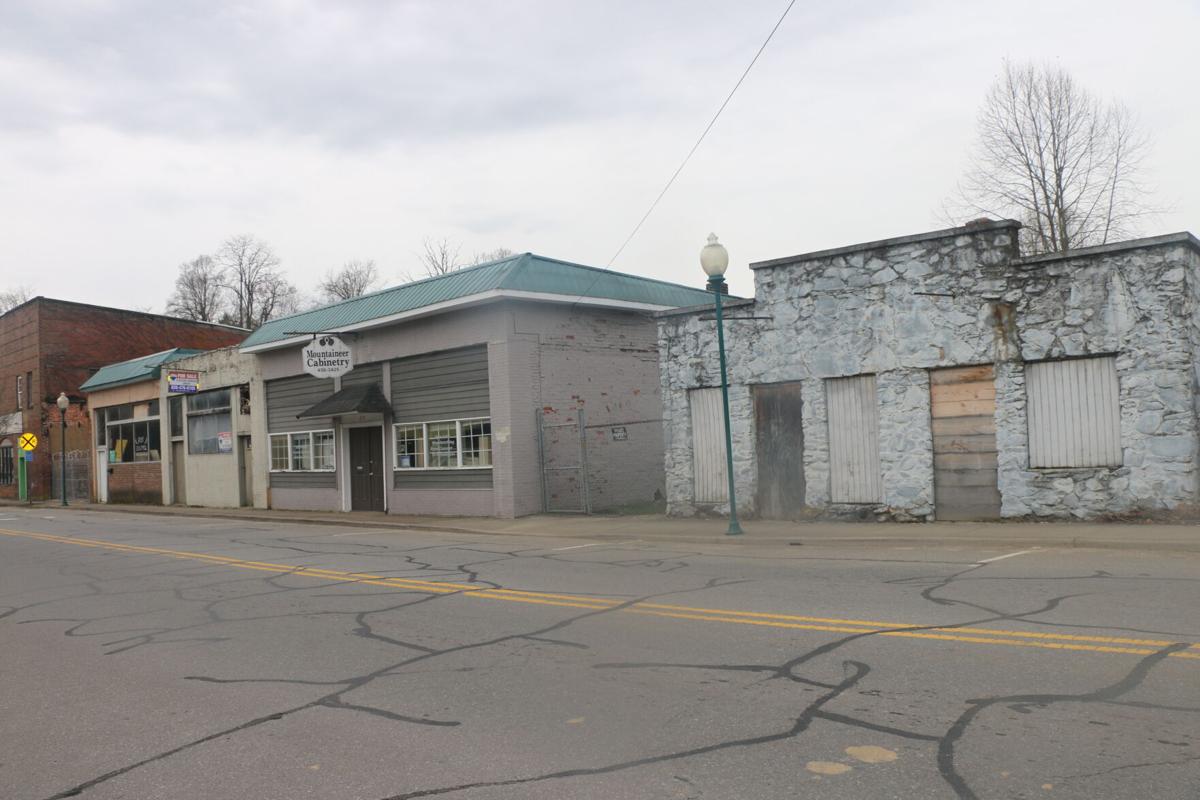 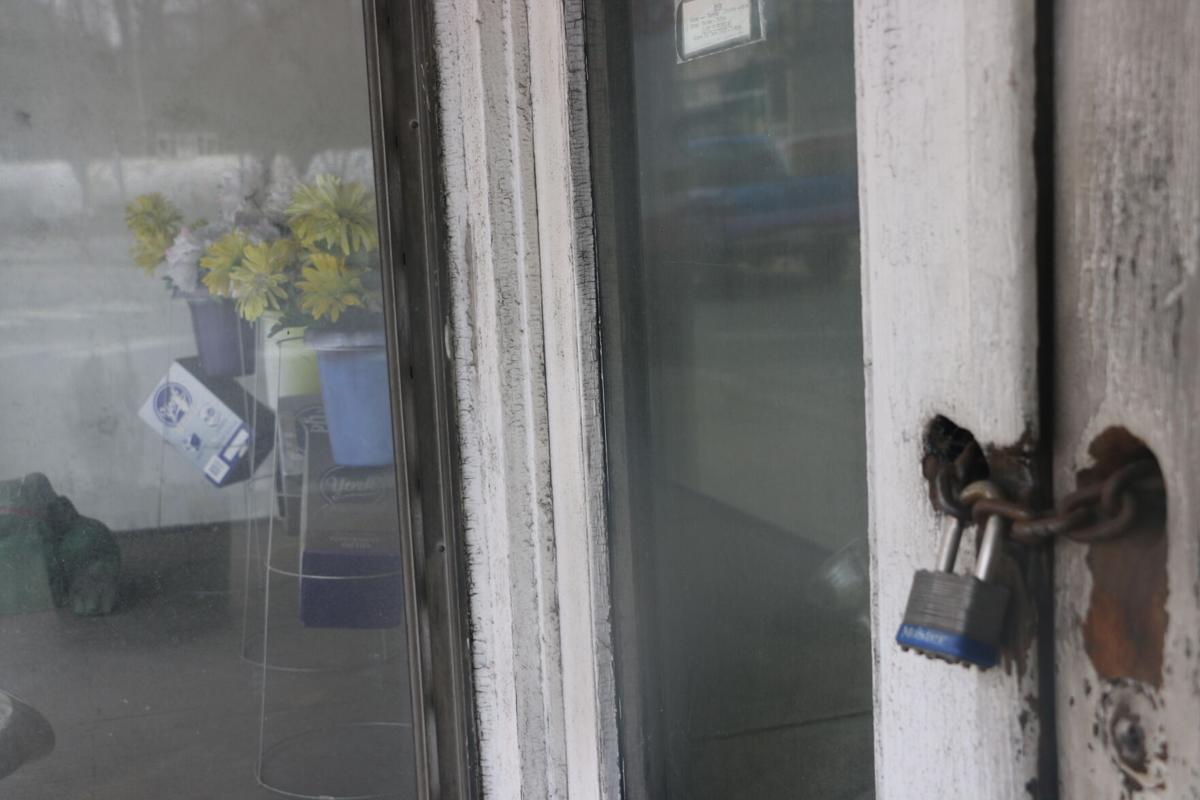 CLOSED — Many of the storefronts in Frog Level have locks on the doors and are vacant inside.

FOR SALE — This spacious building at the intersection of Depot and Commerce streets is being marketed by Tessier Associates.

EMPTY — The Frog Level building that once housed several businesses has been shuttered for more than a year.

FROG POND ESTATE — A building owned by Jack Wadham is so spacious it has two addresses attached to it. The building has long been vacant and has bars on some of the windows and doors.

CLOSED — Many of the storefronts in Frog Level have locks on the doors and are vacant inside.

Of the three walkable business districts in Waynesville — Main Street, Frog Level and Hazelwood — not all held their own when COVID hit.

Elizabeth Teague, head of Waynesville’s development services, said while downtown Waynesville merchants did well as visitors flocked to rural areas with low case numbers as a way to escape virus hotspots, such was not the case with either Hazelwood or Frog Level.

“Obviously, the municipal service district on Main Street has done a lot of really cool things with its streetscape, special events and having a staff person,” Teague said. “You can see these wonderful businesses and people who are investing in Hazelwood and Frog Level, and you want to create other support for them.”

Several Frog Level businesses were closed temporarily due to the coronavirus and a couple still haven’t fully opened to the public. Add that to the vacant storefronts in the one-block area across the railroad tracks and before the Richland Creek bridge on Depot Street, and the one block of commercial buildings on one side of Commerce Street, and there was not much to draw people into the area.

“That says to me we have to do a better job connecting the business districts together,” Teague said. “Maybe we put in decorative lights that tie in with what happened on Main Street and help create a special downtown feeling. The other thing the town has done in the past is the parking lot. That made a difference, but there are still some more things we can do to support interests down there.”

The brokerage/management company has a track record of working with clients interested in historical areas and renovation, Schatz said.

For the past 18 months, he has been working with two key property owners in Frog Level with property to sell. One is the Frog Pond estate buildings on Commerce Street and the other is at 237 Depot Street.

The buildings are kitty-corner from each other as shoppers enter Frog Level from the downtown area.

Schatz sees the historic Frog Level as a place ripe for redevelopment, but that’s something that would need more than just two property owners on board, he said.

“I had a client who introduced me to Jack Wadham, who owns the 10 and 24 Commerce Street buildings,” Schatz said. “We got to know one another and I recognized the project in Frog Level was much bigger than one building. To serve the community well, I needed to become acquainted with other building owners who were interested in seeing Frog Level blossom.”

Toward that end, Schatz has had several meetings with a number of building owners in the district who recognize that targeting a neighborhood for redevelopment that’s right off the town’s Main Street district could open a world of possibilities.

“I’m hoping to get a group that would work together if a developer were to look at more than these two properties,” Schatz said of the potential in Frog Level.

Before COVID-19 hit, Schatz said he had a couple of buyers “nipping around the edges,” and is hoping there is a light at the end of the tunnel as pandemic recovery continues.

Since Frog Level is an historic district, it opens the door to receiving historic tax credits, Schatz said.

“The ideal client is someone with a history of restoring historic districts, is sensitive to the community and has the wherewithal to make a long-term investment,” he said. “I think there’s a real opportunity in Frog Level to make it a very vibrant area for living and for business.”

Still, Schatz said his role as a broker who represents his clients is to help them sell their buildings. If someone wants to look at the overall district, he can help, but if a willing buyer only wants a single building, he’ll work to make that happen, too.

Through the years, Frog Level merchants have complained about itinerants, winos and drug users who have long considered Frog Level home or a second home.

It is a situation not likely to change, Schatz said, and it could be problematic.

“That’s a bigger issue than just developing Frog Level,” he said. “I know there’s a task force looking into this. It’s more than just feeding the homeless. It’s dealing with whole range of issues.”

When Frog Level develops, the environment may no longer be appealing to the downtrodden, he said, but that would simply move people from one to another.

Teague discussed the town’s comprehensive plan as it relates to Frog Level.

“With Frog Level the challenge is the fact there is a homeless population traveling through there and using that area,” she said. “We also have some key anchor buildings in disrepair. The planning department is working with property owners to look for opportunities to do something with the buildings.”

“Clearly there are some people down there who really care, and, as a town, we care, too. I feel like there will be something that emerges,” she said.

When COVID-19 hit, the pandemic impacted the three walkable business areas in town much differently, she observed. While downtown Waynesville merchants did well as visitors flocked to rural areas with low case numbers as a way too escape virus hotspots, such was not the case with either Hazelwood or Frog Level.

Decorative lighting for Frog Level is one idea that has been floated, she said, but as far as other ways the town can help, it will be necessary to talk with business owners to see what could be the best ways to create a special feel in each area.

The historic buildings in Frog Level offer one opportunity.

“The challenge is to look at the best uses of the buildings, how to protect their historic nature, but at the same time address structural issues,” Teague said, noting Schatz has a lot of experience in this field. “Hopefully, the town and the property owners can work together to find a path forward for the right tenants and for the future of the buildings.”