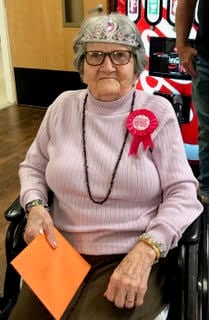 THOMPSON — Last year on her birthday, Thompson was able to spend time with her family and visit face to face. 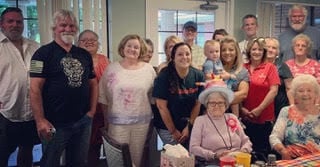 THOMPSON — Last year on her birthday, Thompson was able to spend time with her family and visit face to face.

Bonnie Blaylock Thompson, a resident at Autumn Care of Waynesville, turned 95 on June 28. Thompson has not visited with her family since the pandemic began, and her niece, Jimmie Pratt, wanted to do something sweet for Thompson on her birthday.

The idea for the “birthday card bomb” came from Thompson’s niece while she was scrolling through Facebook one day. She knew her aunt has many friends, family and loved ones across the world and came up with the idea to make a post that read, “Favor — My Aunt Bonnie is in an assisted living facility and hasn’t seen family since March because of COVID-19. Her birthday is June 28. Could you send her a birthday card?”

Pratt listed her aunt’s address with the post and from there, she received over 40 messages saying that they were planning to send cards to Thompson. Cards came in from all over the United States as well as, Kosovo, in Southeast Europe. These cards were in addition to the cards that Thompson received from her immediate family.

Aside from the cards Thompson received, she was also surprised with a socially distanced window visit from her sisters, Cheryl Sanford and Margaret Blaylock. The three sisters were able to visit together for Thompson’s birthday.

Thompson’s niece called Autumn Care as soon as messages came in about sending cards, and warned staff that there would be a multitude of cards coming in for Bonnie Thompson’s birthday. Thankfully, the idea was well received and the staff agreed to hold the birthday cards until Thompson’s birthday and give them to her all at once, essentially making it a “birthday card bomb.”

Last year, Thompson was able to spend her birthday surrounded by her loved ones. This year’s birthday was a little bit different, but nevertheless, Thompson was showered in love and well wishes from her friends and family from across the globe.