BOARD SHAKEUP — Keith Burris, left, and Sherry Burris, right, flank Tommy Warwick just after he was named the chairman of Jonathan Creek Fire Department’s board. In the foreground is Charlie Boyd, whose chair Warwick assumed just prior to this photo being taken. JUST PRIOR — This was the setup for the community meeting that took place after the board’s budget meeting was help upstairs. 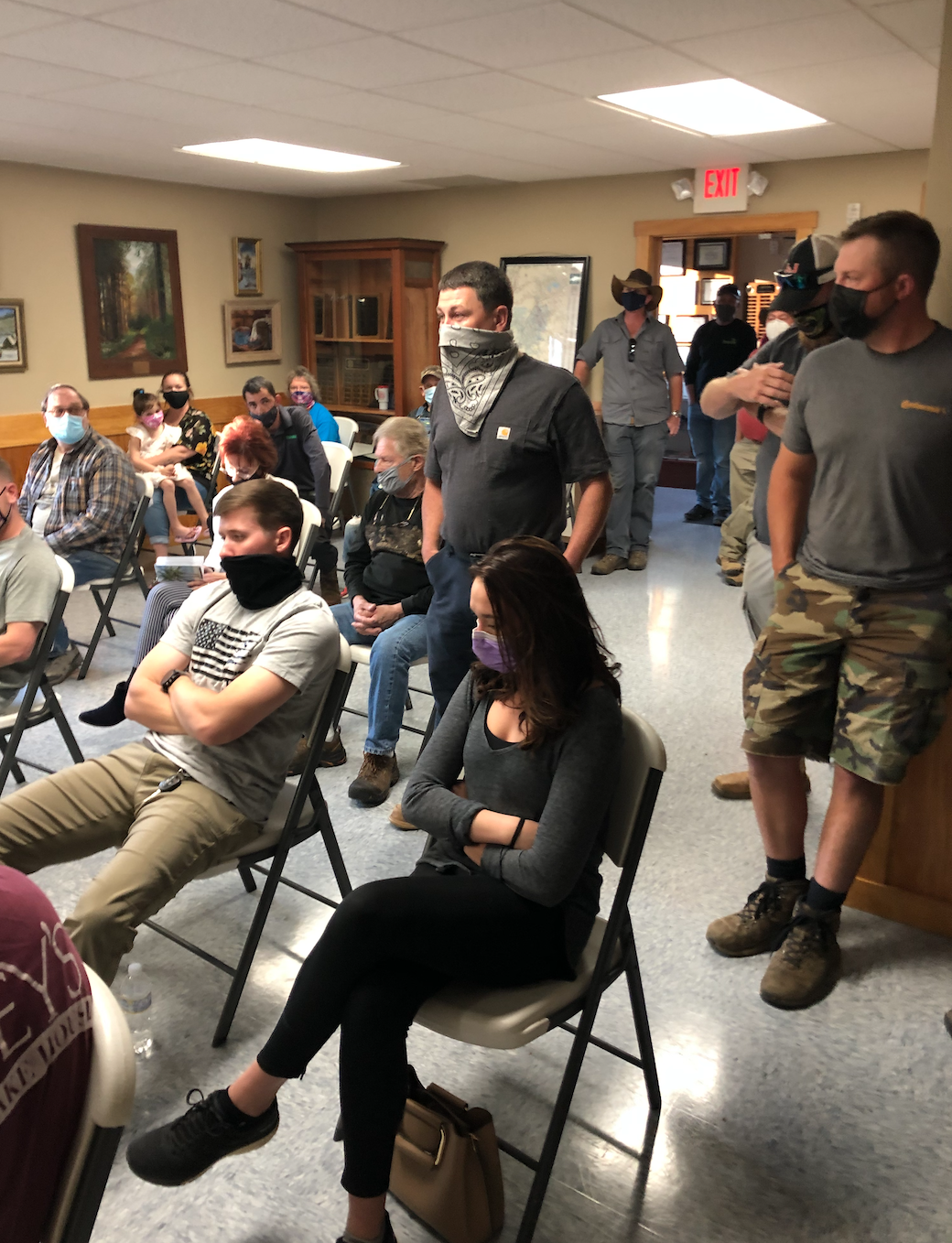 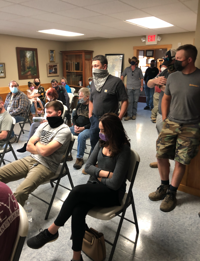 THE ELEPHANT IN THE ROOM — Jonathan Greene, pictured here in the center, broached the topic of turmoil within the department, which opened the floodgates for a series of comments voicing frustration over the Jonathan Creek Fire Department’s recent issues. 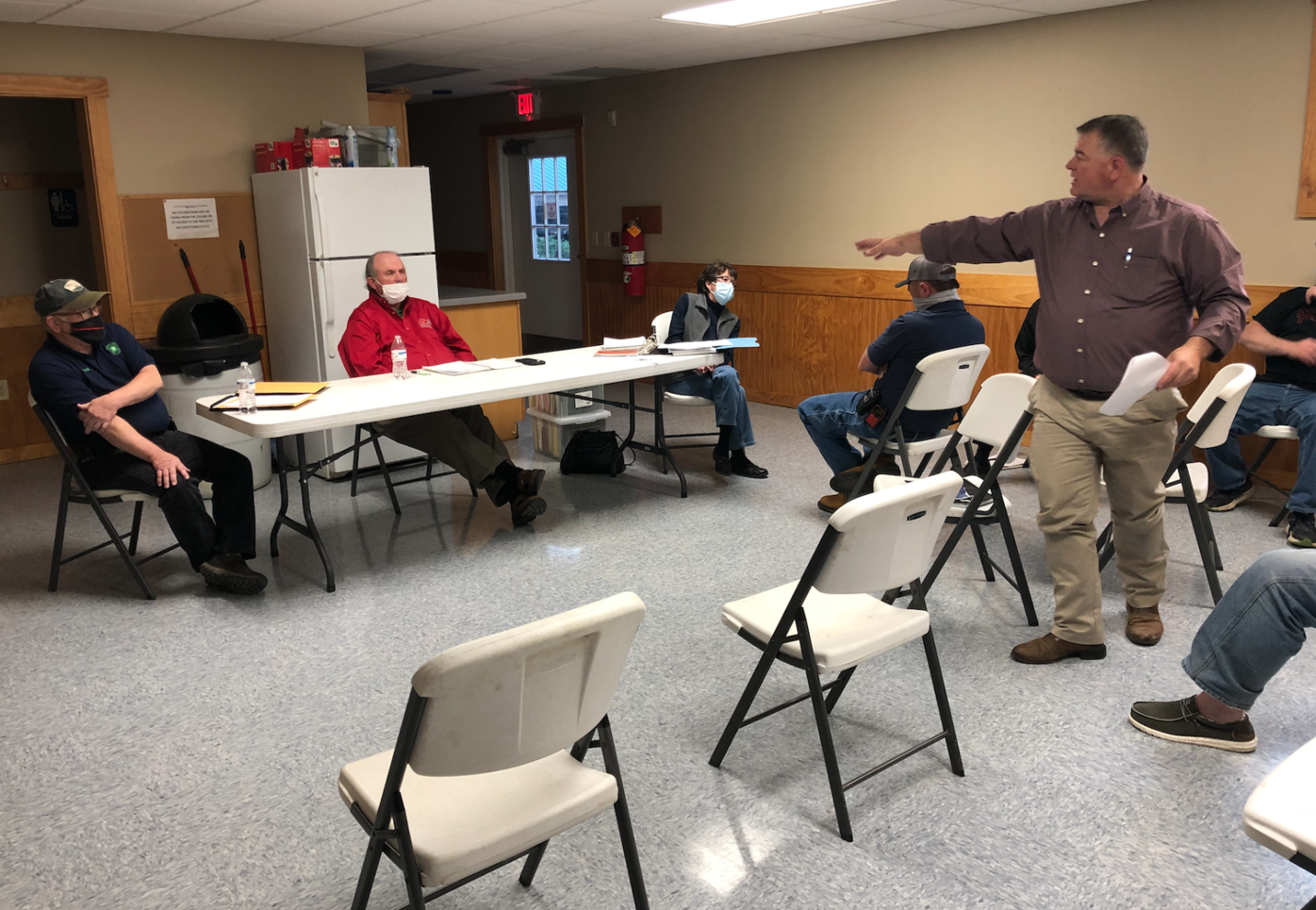 FIRED UP — Kris Boyd was among those with the strongest points to make regarding the board and its bylaws. Boyd was later named to the board. NEW MEMBER — Firefighter Marion Russell, who spoke at length about the legacy of Claud “Paw” Messer was later named to the fire department’s board. 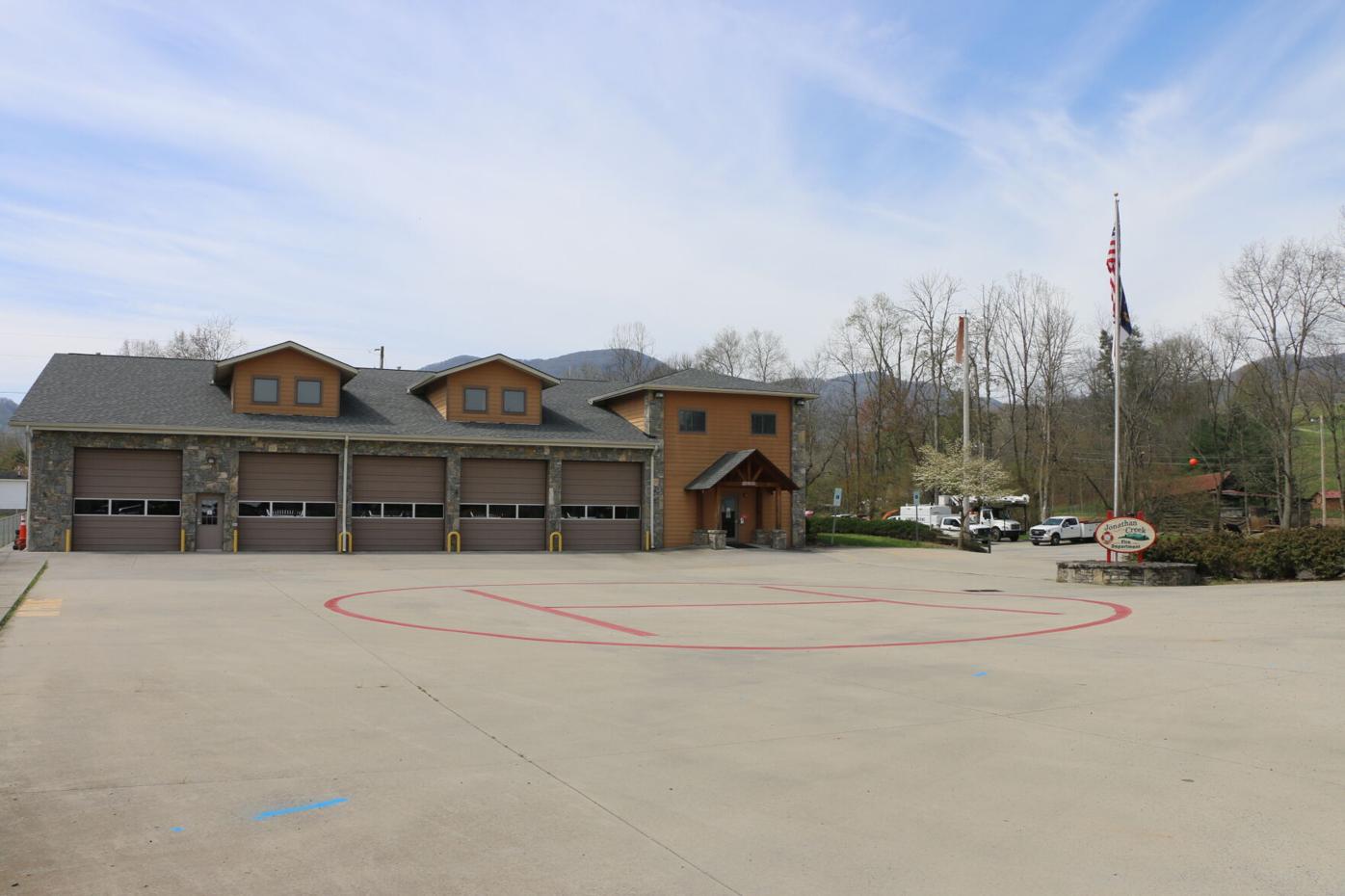 BOARD SHAKEUP — Keith Burris, left, and Sherry Burris, right, flank Tommy Warwick just after he was named the chairman of Jonathan Creek Fire Department’s board. In the foreground is Charlie Boyd, whose chair Warwick assumed just prior to this photo being taken.

JUST PRIOR — This was the setup for the community meeting that took place after the board’s budget meeting was help upstairs.

THE ELEPHANT IN THE ROOM — Jonathan Greene, pictured here in the center, broached the topic of turmoil within the department, which opened the floodgates for a series of comments voicing frustration over the Jonathan Creek Fire Department’s recent issues.

FIRED UP — Kris Boyd was among those with the strongest points to make regarding the board and its bylaws. Boyd was later named to the board.

NEW MEMBER — Firefighter Marion Russell, who spoke at length about the legacy of Claud “Paw” Messer was later named to the fire department’s board.

The conversation at the Jonathan Creek Fire Department’s budget meeting last Monday was subdued, but tense undertones could be felt throughout.

At that meeting, the agenda was passing the department’s annual budget, but downstairs, firefighters and community members amassed, ready to discuss the recent issues that had manifested over the last six weeks or so and led to the departure of about a third of its firefighters.

By the end of that night, the outcry was so intense that Keith Burris resigned both as fire chief and from the department’s board.

At the regularly-scheduled annual community meeting following the adoption of the new budget, people were slow to bring up the recent turmoil, until firefighter Joshua Greene stood up to address what he called the “elephant in the room.”

“I think there are questions,” he said.

Handling the questions was “meeting chairman” Charlie Boyd, flanked to the right by Keith Burris and to the left by Sherry Burris, Keith’s wife and the board member who served as both secretary and treasurer.

As concerns emerged first from firefighters, Boyd frequently replied that everything would be taken into consideration. Many questions regarded the timing of the recent retirements or resignations of several senior firefighters.

Keith Burris claimed the retirements seemed planned, even though they all came at the heels of an allegedly heated closed-session board meeting held a few weeks ago. When that was brought up, Burris swore it was a personnel matter and had nothing to do with operations.

“Why are these firefighters upset then?” someone from the crowd asked.

“Were those retirements really planned or were they abrupt?” asked community member Melissa Warwick. “My understanding is they were abrupt, which seems suspect.”

“Men don’t just walk off of a job they love … there’s got to be a reason,” said community member Janice Cheairs.

Cheairs also pointed out a couple of other concerns she’d noted. First, she brought up that the bylaws were from 1991. As poorly-written as those bylaws are, even board members struggled to interpret them on the spot. In addition, Cheairs noted what she considered an issue with the board’s makeup.

Firefighter Kris Boyd, who is also employed as Haywood County’s operations director, also turned his focus to the board itself, which was operating without a chairman after the last one departed and had multiple vacancies.

“Does the board appoint its own members, or does the community vote?” he asked with no clear answer provided.

“According to the bylaws, two board members should roll off each year with two new members rolling on a six-year per position schedule,” said Melissa Warwick.

Another member of the public, Mark Cheairs, said he’d been on the board of a Louisiana fire department for 10 years, seven of which he served as chairman. He asked if the board was represented by an attorney. Charlie Boyd quickly answered that they don’t have one.

“I suggest you get one,” Cheairs said, before also offering his own help to assist in sorting out the board’s issues.

Because the bylaws weren’t written clearly, there was some back and forth over how the board vacancies should be filled.

“It’d be nice if we had an attorney here to clear this up,” one man in the crowd said.

Kris Boyd abruptly motioned that Tommy Warwick, one of the founding members of the department who was present at the meeting, be appointed board chairman. A vote was held, and while a few people abstained, there was not a single vote against that appointment.

Warwick took the seat at the center of the table previously held by Charlie Boyd. One firefighter happy with the move said he considered Charlie Boyd to be a “good man” but added that “what’s right is right.”

“While we’re at it, I think one of the Burris’ should rotate off,” a man in the crowd said once the applause died down.

Keith Burris immediately resigned his board position, much to the joy of the crowd.

Tommy Warwick spoke briefly, noting that the department’s road ahead toward recovery may be tough in the wake of the resignations and retirements.

“We have lost 237 years of combined active service in five weeks,” he said.

Those in attendance weren’t quite done saying what they had to say. Emerging from the back of the room was firefighter Marion Russell, clothed in a “Terminix” shirt, a reminder of the fact that those who serve the community as firefighters have other jobs and responsibilities.

He spoke about Claud “Paw” Messer, who, like Tommy Warwick, was a founding member of the department. Paw Messer died in the line of duty Sept. 20, 2019 at the age of 74.

“Mr. Paw would be very ashamed at this point with what has occurred in five weeks,” Russell said.

But Russell wasn’t all doom and gloom.

“With our community support, we can get pretty doggone close to where we were, but it’s going to take us all,” he said. “We can’t have this split. It ain’t going to work. You either got everybody on board or you don’t. We’re a team, we’re a family. When you’ve got first responders, we’re family because we spend the majority of our time with each other.”

Around the time Russell was speaking, an emergency beacon rang out over firefighters’ radios, sending Keith Burris, who was still chief, as well as several others rushing into the bay to dress out for whatever casualty was called in.

The call seemed to be a decent segue into one other thing Russell wanted to talk about.

“We’ve got an ISO coming up,” he said. “That is where … the state comes in and evaluates our paperwork, personnel and answering calls, all kinds of stuff. We’re put to a test, say a structure fire … we have to have so many trained personnel in order to do this test.”

The department’s performance in that evaluation determines its insurance rating, which can affect property taxpayers or residents in the fire district. However, Tommy Warwick pointed out that the ISO won’t likely occur until later in the year, and even then, if they fail, they can still pass as long as it’s within six months.

“We have a timeframe. We would not be upside-down,” he said.

But still, the concern is there, not only for the ISO, but for the department’s overall ability to respond to emergencies within the community it serves.

Finally, near the end of the meeting, came the question on everyone’s mind: would Keith Burris resign as chief? Because the call for service they’d initially responded to mid-meeting turned out to be a false alarm, those firefighters had returned, but Burris waited outside in the parking lot.

“I heard from more than one horse’s mouth that they just could not work with chief Burris, our current chief,” said one of the firefighters in the crowd. “I did not ever hear that about [former] chief Bob Messer.”

A bold community member went outside and asked Burris straight-up if he was resigning as chief, and he confirmed it for everyone. That night, he resigned.

It was then decided that before appointing a new chief, the board vacancies, including the one left by Burris would need to be filled. Three firefighters, Marion Russell, Kris Boyd and Mike Head, were quickly approved by the community and installed as board members. The final recommendation from community members, along with writing new bylaws, was to try to bring back some of the members they’d lost during the prior weeks’ turmoil. “Re-recruitment,” they called it.

“We need to regroup and see what it would take to get some of these people back,” Tommy Warwick said.

And now those efforts are underway. In a Wednesday interview with The Mountaineer, Tommy Warwick confirmed that the board is now properly manned and that it had named Nathan Franklin, who was not present at Monday’s meeting, the acting chief. While there is still quite a bit of work to be done to right the ship, Warwick was confident it’s at least now on the right track.

“We’re not going to rush through this, but we’re going to restructure as needed,” he said. “I feel that we’re going in the correct direction at this time, and we’ll be where we need to be.”