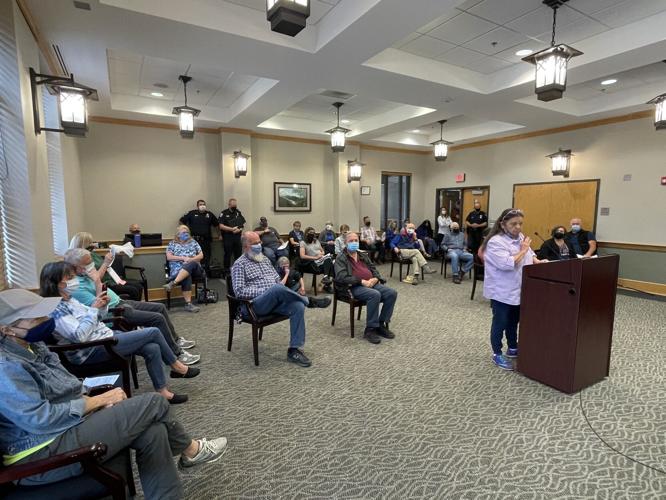 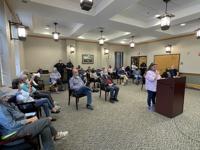 HOMELESS DEBATE — Peggy Hannah, a leader of the Saving Haywood group, has spoken at the twice-monthly Waynesville town board meetings for nearly a year to draw attention to what she considers negative impacts of the town’s homeless population on the greater community. 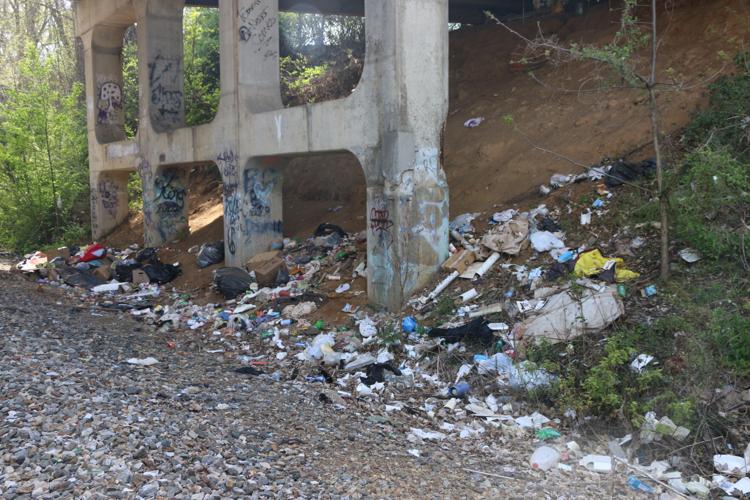 TRASH BUILDUP — While many sleep directly beneath the bridge decking, the trash is concentrated at the bridge base adjacent to the railroad tracks. 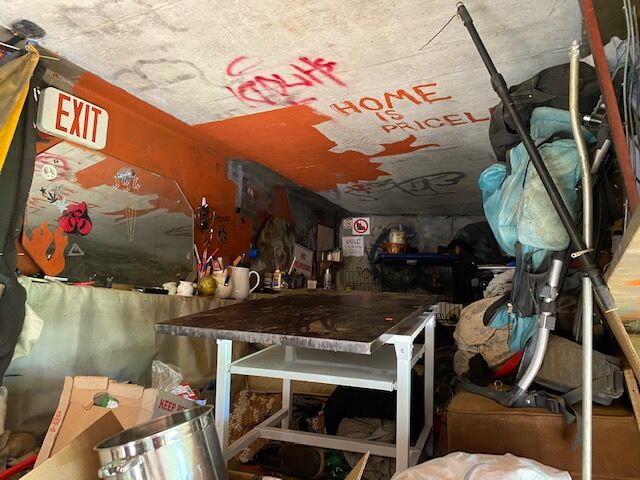 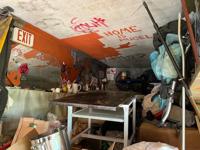 MAKESHIFT FURNITURE — An area beneath the Russ Avenue bridge was equipped with a makeshift table, kitchen utensils and even wall hangings.

HOMELESS DEBATE — Peggy Hannah, a leader of the Saving Haywood group, has spoken at the twice-monthly Waynesville town board meetings for nearly a year to draw attention to what she considers negative impacts of the town’s homeless population on the greater community.

TRASH BUILDUP — While many sleep directly beneath the bridge decking, the trash is concentrated at the bridge base adjacent to the railroad tracks.

MAKESHIFT FURNITURE — An area beneath the Russ Avenue bridge was equipped with a makeshift table, kitchen utensils and even wall hangings.

Controversy over the cleanup of a homeless encampment under a bridge on Russ Avenue in Waynesville has drawn sharp opinions on both sides, following an article in The Mountaineer two weeks ago.

That article prompted more than 450 comments on Facebook, including harsh criticism of those who carried out the cleanup — namely for trashing the stockpiled possessions of the bridge squatters.

Others lauded the effort, however, thanking those who rolled up their sleeves to rid the town of a potentially dangerous and unsanitary situation created by the makeshift encampment and years of trash that had accumulated from beneath-the-bridge dwellers.

The debate spilled over into a Waynesville town board meeting last week, with speakers on both sides of the issue taking the mic during the public comment period.

Erich Overhultz, a member of Saving Haywood that has spearheaded numerous clean-ups of homeless encampments over the past couple months, defended the group’s actions.

“To the critics, I say this,” Overhultz said. “This is our community, and right now we don’t have time for your armchair quarterbacking, your excuses, and your virtue signaling. We will take this community back. You can mock us, but you won’t stop us.”

Overhultz, along with other members of Saving Haywood, criticized the tone of The Mountaineer article for portraying them as insensitive to the plight of the homeless and for characterizing the clean-up as a “dismantling” of homeless living quarters and possessions — which in turn fueled the online criticism.

“My wife who participated in the cleanup, was subjected to online harassment and in the most harsh, vulgar, and abusive language,” Overhultz said.

Overhultz’s comments were followed by a speaker who called for more compassion toward the homeless and criticized the bridge clean-up as punitive to the less fortunate.

“I was shocked and saddened to see the recent article about someone experiencing homelessness being robbed by community residents and their campsite deconstructed, taking their food and throwing it away, as well as their personal items,” said Hannah Minick. “There are so many ways this could have been handled differently.”

Instead, the community should come together in support of those in need, and should see them as fellow human beings rather than condemn them for living in poverty.

“I am disturbed by the fact the most vulnerable in the community, specifically the homeless population, are targeted and continually blamed unjustly,” said Minick.

Minick said the town should not have condoned the dismantling of the squatters’ camp, and that the homeless people should have been given more notice so they could save their things.

“I call on the board of aldermen not to be reactive or listen to the voices of only a few, but to pause and consider ways we can work together and build a community that fosters love and kindness in a way we can all be proud of,” Minick said, adding that “pushing people out of sight” isn’t the answer.

Overhultz countered that those who are so concerned about the plight of the homeless should have intervened to help them sooner, rather than turning a blind eye to the public health nuisance and safety issues created by the encampment. The five-hour clean-up undertaken by a dozen volunteers netted two tons of trash, including discarded syringes and drug paraphernalia — which Overhultz noted was not far from a children’s playground.

“This is also where vagrants caused over $400,000 in damage to a fiber optic system with their fire this past winter,” Overhultz said. “I challenge both town officials and town citizens to do their part to see that the appearance of this community never ever deteriorates to this point again.”

Another speaker to come forward was James Hall, who’s previously been homeless.

“For the community to sit out here and down these people, they don’t know nothing about these people. They don’t care about them,” said Hall. “All they want to do is down people in the newspaper. But until they realize what it is like, they shouldn’t be saying nothing.”

Hall is a registered sex offender for two separate incidents involving indecent liberties with 12-year-olds when he was 27 and 29 — in 1998 and 2000.

Saving Haywood vs. Down Home

Community debate over the town’s homeless population isn’t new. It was a signature issue in the last town board election, which in turn gave rise to a homeless task force that’s been charged with examining the issue and coming up with solutions.

Meanwhile, the grassroots Saving Haywood group has appeared regularly at every town board meeting for nearly a year to lodge complaints about trash, drug use, public disturbances, illegal campsites, squatting in abandoned buildings, discarded beer bottles, crime and other issues stemming from the homeless population.

One of the group’s leaders, Peggy Hannah, spoke at last week’s town meeting as usual. Hannah not only defended Saving Haywood but took another grassroots group to task — namely the progressive activist group Down Home NC.

Hannah attempted to connect the dots between Down Home and the town’s hired facilitator for the homeless task force.

“This board has turned the keys to our city over to a radical left professor of social work from Western Carolina University who follows the radical left platform of DownHome,” Hannah said.

Town Attorney Bill Cannon twice cut Hannah off during her public comments, saying that she couldn’t use her time to talk about Down Home.

“Mrs. Hannah, you are focusing on other people and other organizations,” Cannon said. “This is time for you to comment on the issue before the board, not to talk about some other organization. The board wants to hear from you about what they can do.”

Hannah claimed her comments were relevant, however, and that the concerns of Saving Haywood were being ignored.

“If we cannot bring our concerns before the board in a public meeting, we are going to hope and pray there is one media outlet that will print what we would like to know,” Hannah said.

Hannah pointed out that Minick — the previous speaker who called for compassion toward the homeless — had been an assistant for the homeless task force. She served as a student intern to the WCU professor who’s both the chair of the task force and its paid facilitator. Hannah cited the connection as evidence of the inherent bias of the task force. However, Minick said she is not a member of Down Home.

The local coordinator and point person for Down Home’s Haywood chapter, Jesse Lee Dunlap, declined to comment for this article.

Early Saturday morning, volunteers with Saving Haywood tackled the intense job of cleaning up trash left under the Russ Avenue bridge, a popul…

Do gooders on the march. moving homeless from one place to another won't solve anything. We need to find ways to treat the root cause. Why are they homeless? What can be done to help these people? Closing the homeless shelter in Frog Level didn't solve anything. If Haywood County wasn't a tourist destination, would homelessness be the problem it is now. Running people from pillar to post solves nothing.

I’m still waiting on word about those who are so deeply concerned about vagrants trashing the town to opening their own homes to the economically deprived. How many vagrants are there? Fifty? Sixty? Surely there are as many do-gooders with spare rooms in their homes. If you know any, ask them to pitch in and help out.