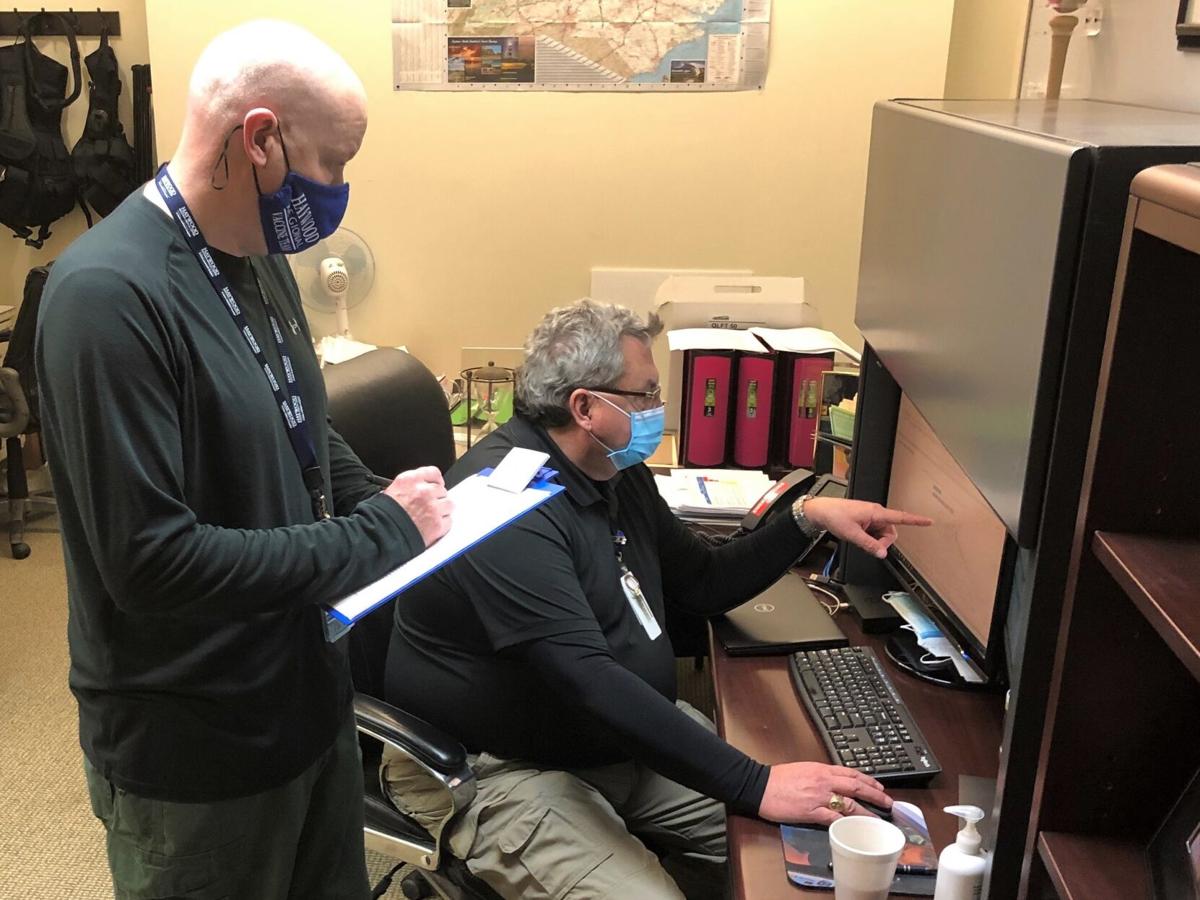 GETTING TO WORK — Despite working for the hospital, Marty Stamey, shown here seated, and Jason Woodbury, standing, have been crucial to the county’s effort to successfully run large-scale vaccination events. 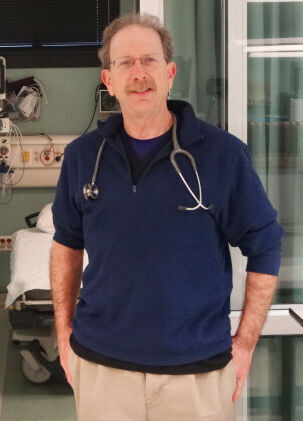 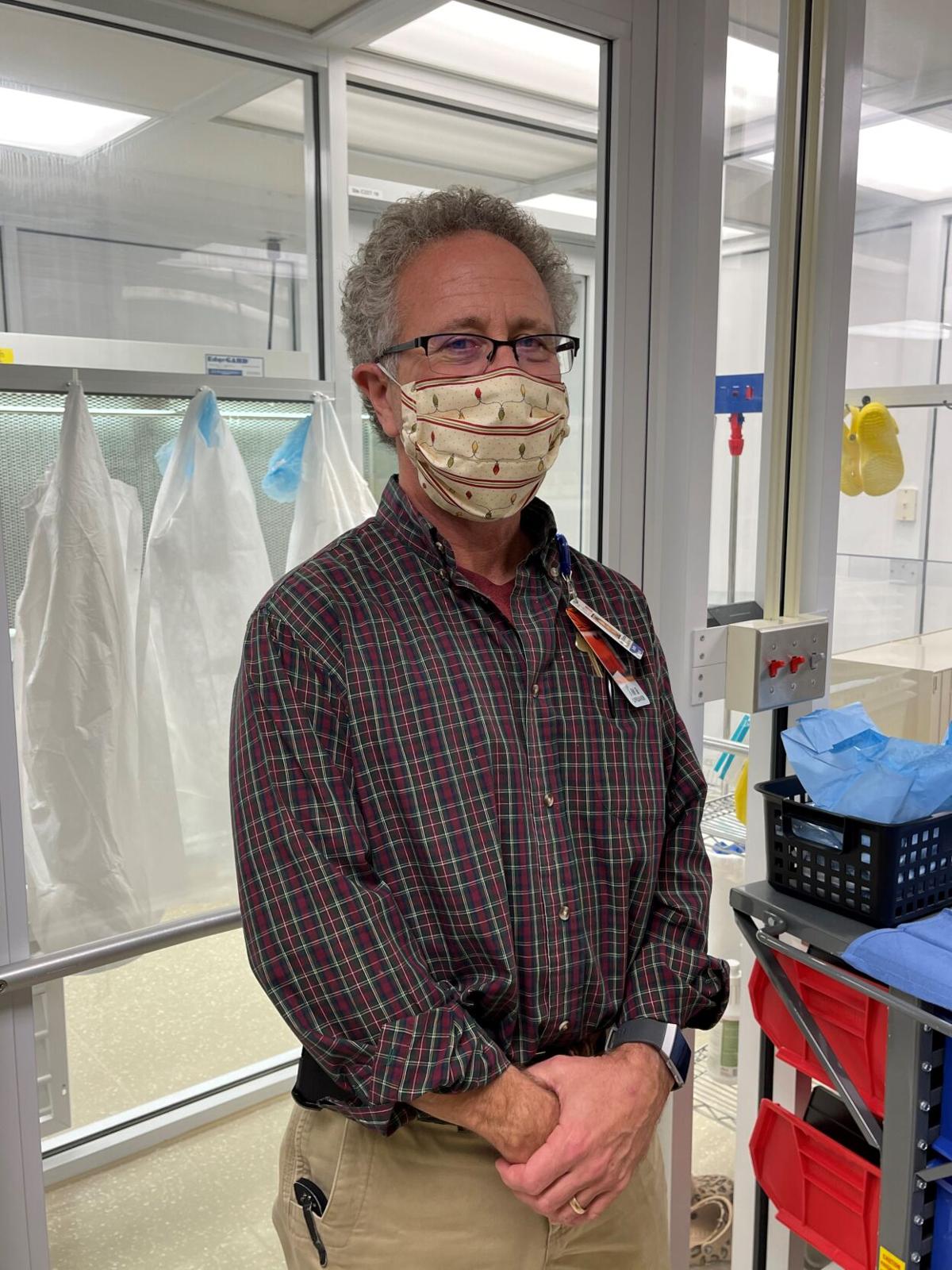 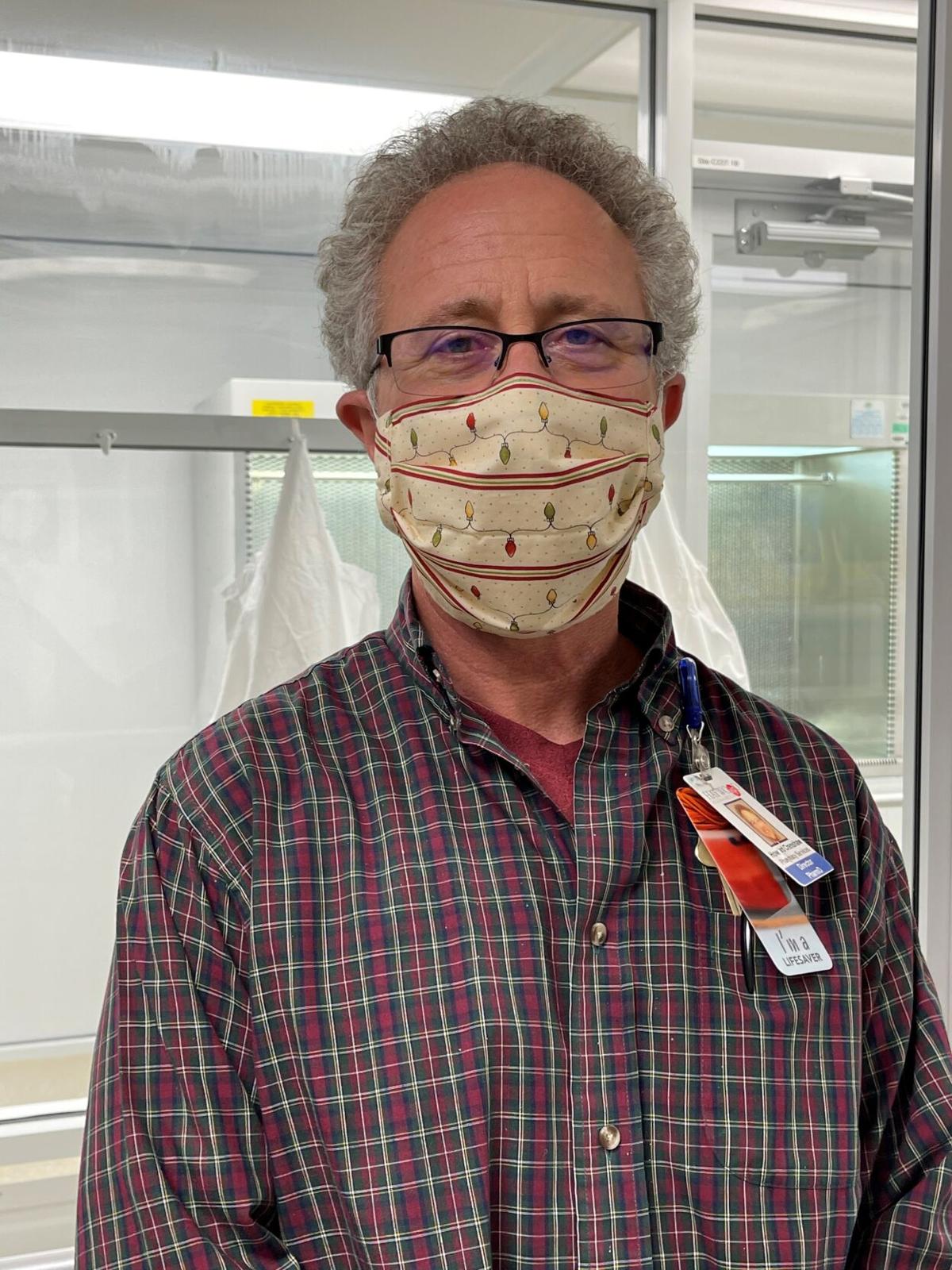 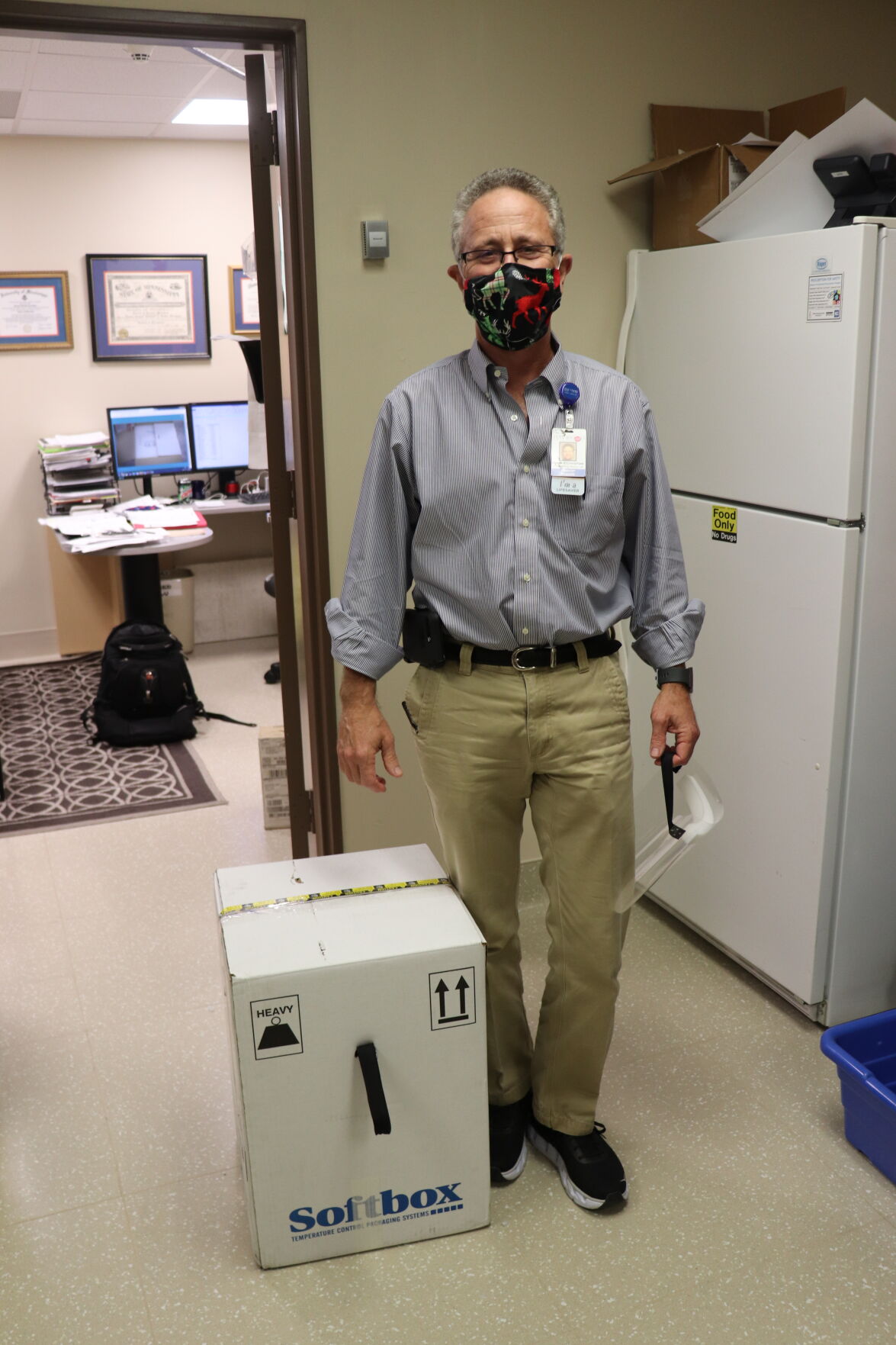 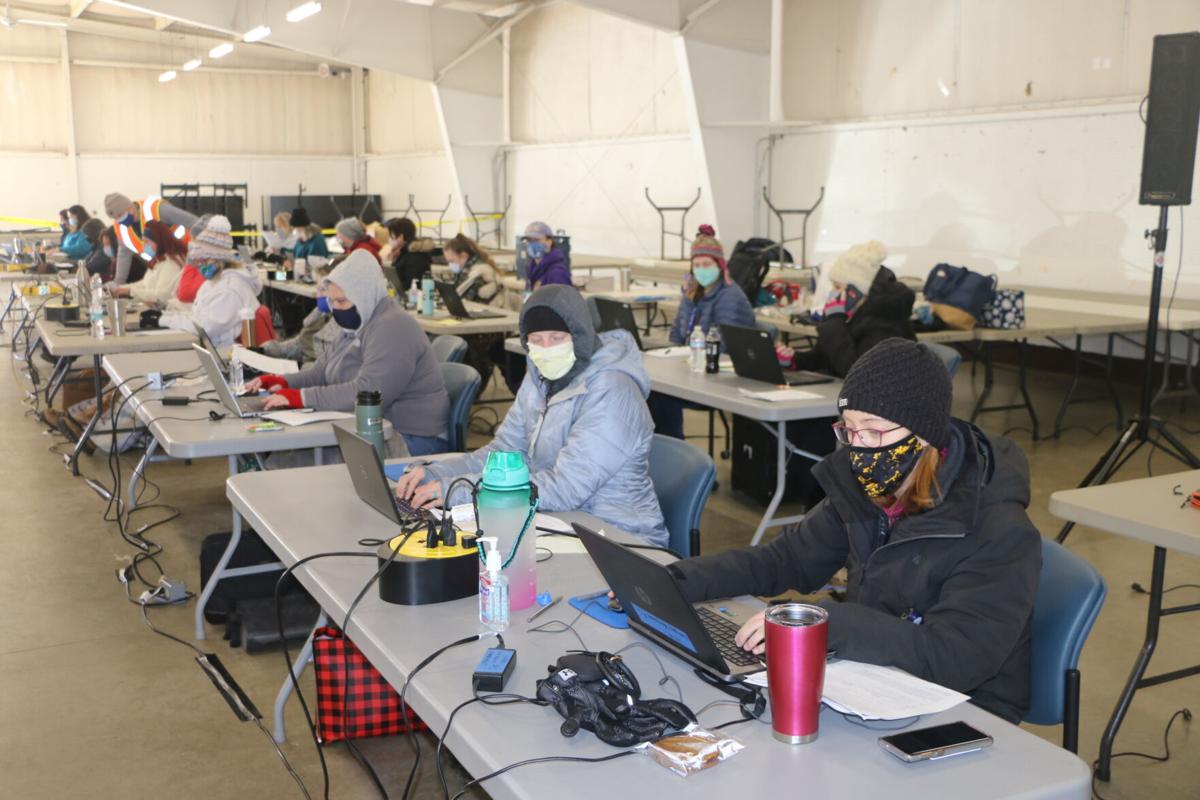 DATA ENTRY — It takes a whole army braving the cold to ensure that the necessary data is entered to ensure the state is up to date on how many people in the county have received their vaccine.

GETTING TO WORK — Despite working for the hospital, Marty Stamey, shown here seated, and Jason Woodbury, standing, have been crucial to the county’s effort to successfully run large-scale vaccination events.

DATA ENTRY — It takes a whole army braving the cold to ensure that the necessary data is entered to ensure the state is up to date on how many people in the county have received their vaccine.

It’s easy to call the county’s successful large-scale vaccination clinics held at the Smoky Mountain Event Center impressive, but many involved believe the most noteworthy accomplishments are the consistent coordination and commitment.

Take, for example, Haywood Regional Medical Center. While the hospital has administered plenty of the Pfizer vaccines it received, its staff have been among the unsung heroes who have made the huge logistical undertaking at the event center possible.

“The sharing and partnering between hospital and health department has been integral to the success of drive-through events,” said Haywood County Medical Director Mark Jaben.

Jaben highlighted the large number of people across the board from EMS, the health department, the hospital and even law enforcement and firefighters who have turned out.

“It’s a good number of each for sure,” he said.

“I’ve worked with a lot of those guys, and I tell them all the time how proud I am of them,” he added about Haywood EMS.

Stamey is also in frequent communication with Haywood County Interim Health Director Garron Bradish, who is in charge of the county’s pandemic response, and Interim Emergency Services Director Travis Donaldson, who had a chief role in planning the successful mass vaccination effort.

‘What you’re seeing over there at the fairgrounds is the result of years of having a strong relationship,” Stamey said.

The hospital is happy to help in mass vaccination efforts, Stamey said, and sends 16-20 people for each event.

Those hospital workers tend to come from departments less burdened by the pandemic, such as outpatient surgical services, but generally speaking, personnel are hard to spare during this tough time.

Hospital employees not only administer vaccines but also have a crucial role when it comes to registration and data entry.

“Data entry is important for the state being aware of what we’re doing so they can know how much we need,” Jaben said, noting hospital staff play a critical role.

When a shot is given, the person administering it puts the basic information into the paperwork provided by the patient. Next, a runner takes it over to the folks doing data entry. It runs by a hospital employee’s eyes first. That person enters basic information like name, date of birth, address and preferred method of contact. Then, a health department worker enters demographical information, which is provided to the state.

The data provided to the state’s COVID-19 Vaccine Management System (CVMS) is used to determine how many vaccines are needed in each county, so accurate, consistent reporting of that information, including from which lot number and manufacturer the vaccine was produced, is critical.

Part of Woodbury’s job is to frequently upgrade the program software, which may become even more crucial down the road.

“From your phone, you can log into that system and show the TSA that you’ve had that vaccination,” he said.

The hospital isn’t just helping with personnel. It’s also supplying some of the Pfizer vaccines it’s been allotted.

“That’s part of our mission statement, to make the community healthier,” he said.

To date, 675 vaccines have been supplied by the hospital for the county’s mass vaccination clinics.

“It takes a little bit more to work with the Pfizer vaccine, so we couldn’t do it on our own,” Jaben said.

Haywood Regional Medical Center Pharmacy Director Howard Crenshaw said the work put in at all levels over the last year to ensure vaccines don’t unnecessarily go to waste has been “taxing but not problematic.” It’s “logistically cumbersome” to deal with the Pfizer vaccine, considering it must be kept at -75 C, he said.

“People need to know that we’re maintaining the highest standards available to protect the public from a bad product,” he said. “I’m proud of that to be honest.”

His enthusiasm is shared by the pharmacy staff, many of whom want to take their turns preparing shipping containers and administering doses to community members. Crenshaw said they all want to be part of the historical effort to overcome this pandemic.

“One of the problems we’ve had is having too many people and trying to figure out how to get everyone some time to do what they want to do and get everyone who wants to be involved involved,” said Crenshaw.

“If you didn’t see the different uniforms everyone had on, if we were all wearing the same scrubs, you’d think we all work together,” he said.

A true public health effort couldn’t be pulled off without this cooperation, he added.

Jaben said the work of the hospital staff and emergency services needs to be commended, but added that so, too, does the work of health department staff, considering services such as child care and women’s health clinics haven’t ceased amid the added workload.

At the end of the day, he said, the coordination between the hospital, the health department emergency services and others is about logistics and planning, but the county’s success is also about passion and pride in collaborating to do work vital to the community’s well-being.

“Everybody has been great to work with,” Crenshaw said. “Everybody wants to help the community and get these vaccines pushed out. I don’t have enough good words to say about the people from HHS in Haywood and EMS. It’s been superb. It’s just been fantastic. Everybody has their eye on the ball.”