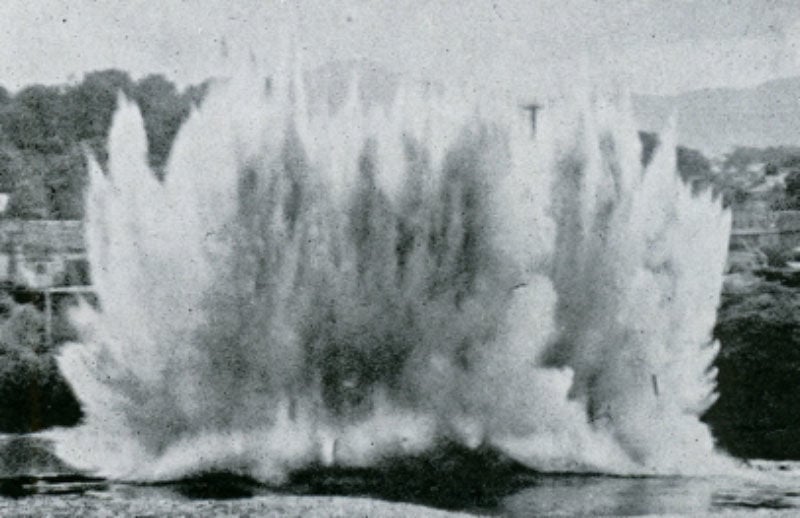 BLOWN TO KINGDOM COME — The Champion Paper and Fibre Co. used dynamite July 5, 1949 to demolish the mill’s original 1906 dam across the Pigeon River. This photo of one of the explosions was made by Bob Anton from the Engineering Department and presented in The Log newsletter. More than 150-sticks of dynamite were used in this charge. (Photo held in Canton Area Historical Museum) 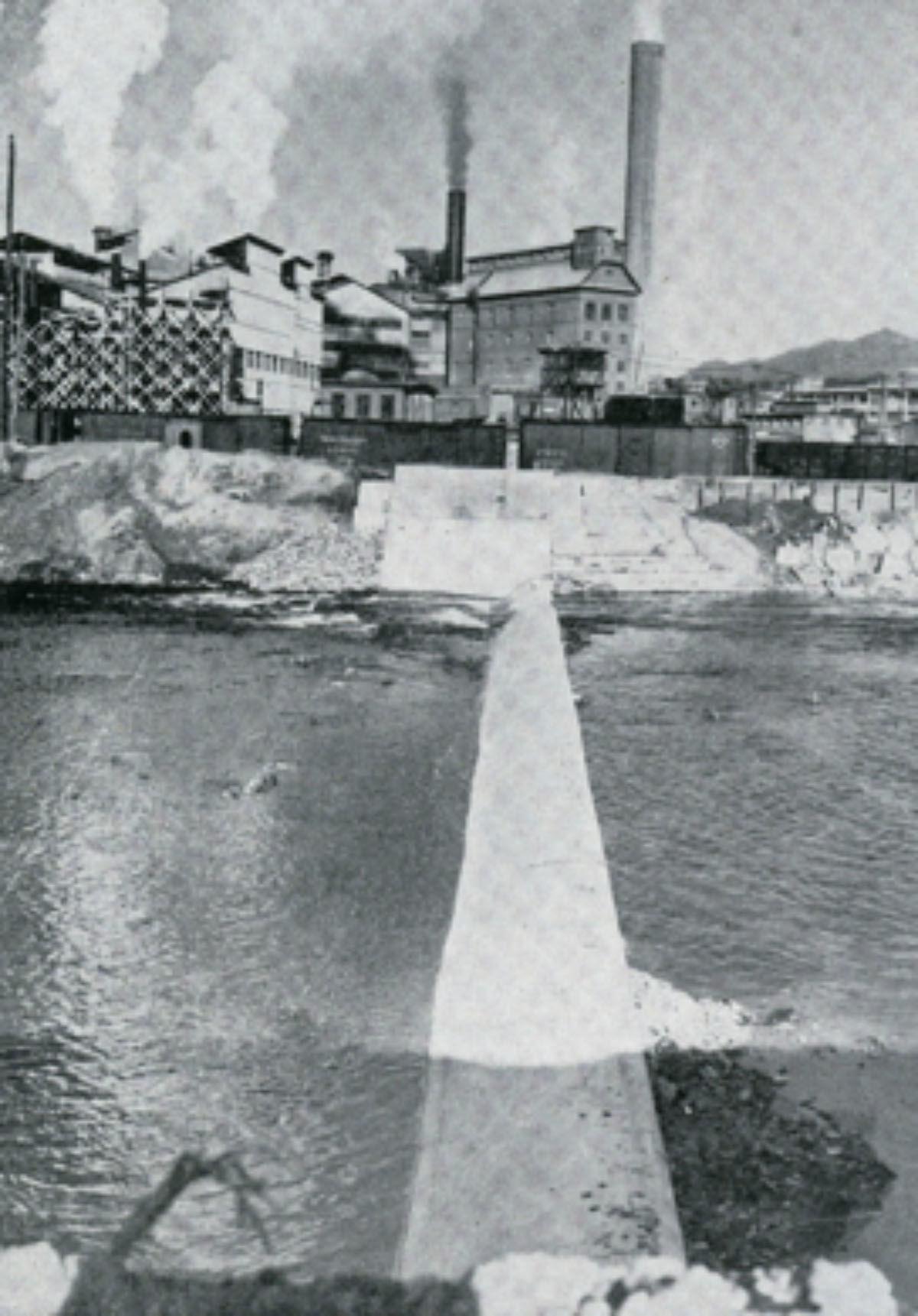 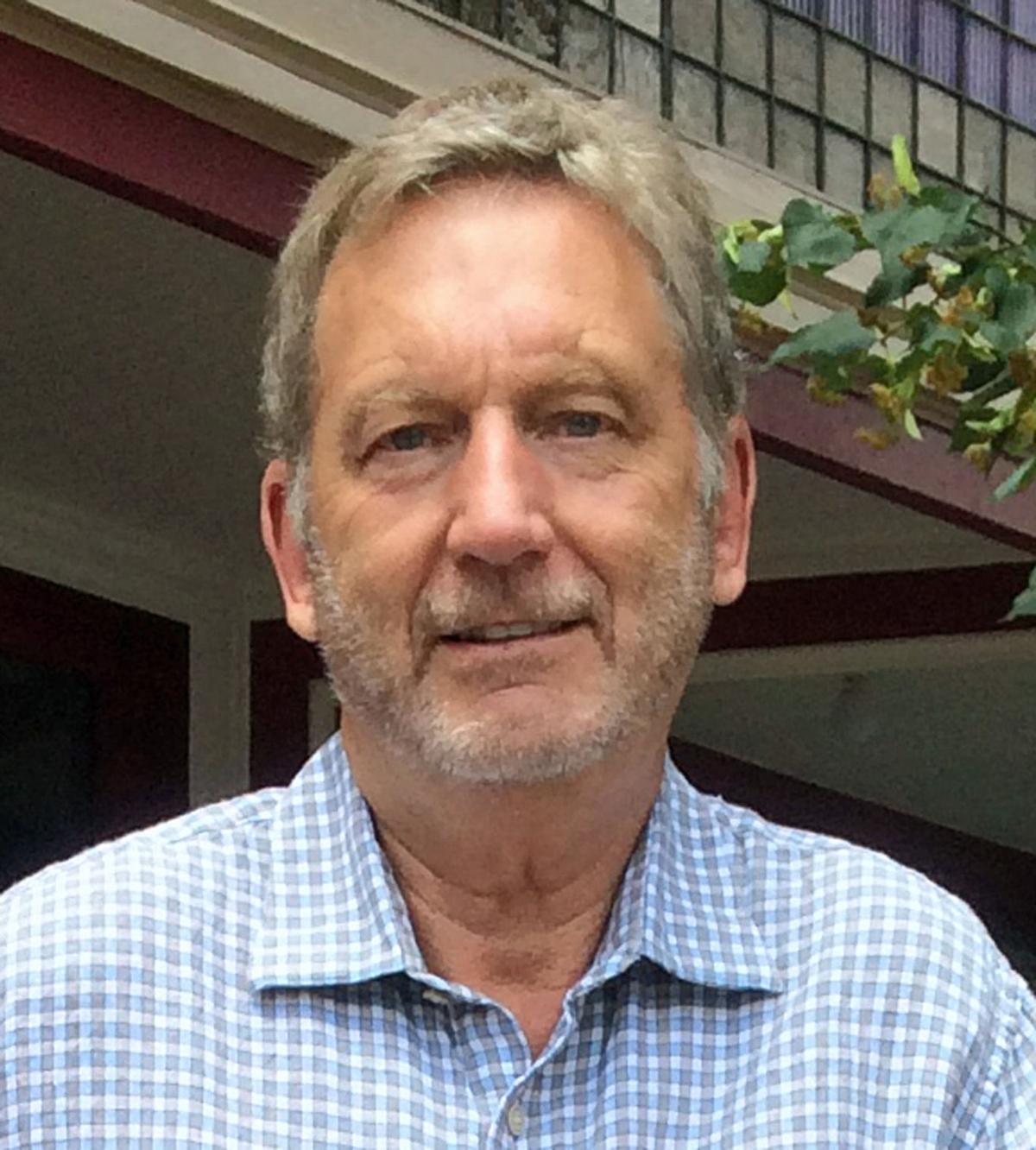 BLOWN TO KINGDOM COME — The Champion Paper and Fibre Co. used dynamite July 5, 1949 to demolish the mill’s original 1906 dam across the Pigeon River. This photo of one of the explosions was made by Bob Anton from the Engineering Department and presented in The Log newsletter. More than 150-sticks of dynamite were used in this charge. (Photo held in Canton Area Historical Museum)

When one thinks of a dam stretching across Western North Carolina’s Pigeon River or one of its tributaries, it is likely that thoughts of large concrete structures like those impounding Lake Logan and Waterville Lake are invoked. Very few folks will envision —or even know about — the low dam checking the waters of the Pigeon River at Canton’s paper mill.

The original pulp factory founded by Peter G. Thomson in 1906 required significant quantities of water to manufacture wood pulp. Damming the river raised the surface level sufficiently to enable large pumps to suck-up the water and push it through iron pipes to a reservoir and the various processes that converted wood chips into pulp.

While researching early editions of The Log (the employee newsletter published by the Champion Fibre Company and later the Champion Paper and Fibre Company), several reports were uncovered that enlighten understanding of the Canton mill’s old dams.

‘Our Dam Has Washed Away’

An article found in the July, 1916, edition of The Log describes how disastrous floods had recently swept over Western North Carolina.

Although the Canton area was not severely impacted by the storm, the Southern’s rail lines along the French Broad River near Asheville were completely inundated.

This caused the editor of The Log to predict, “The Champion Coated Paper Co. at Hamilton, Ohio, may suffer from a shortage of pulp due to the retarded shipments from Canton.”

Whether Peter Thomson’s Coated Paper Company in Ohio was affected by the railroad delays is unknown, but the same report also included this interesting piece of news: “It is true that a section of our dam has washed away…”

Yes, a section of that original 1906 low dam across the Pigeon River had indeed washed away. We can be certain of that because a follow-up report in The Log, dated August, 1916, describes repairs made to it:

“Charles Westmoreland, who has been making repairs to the dam at the Pump house with his crew, recently loaded by hand onto flat cars more than 600,000 pounds of stone. These stones ranged in weight from five to twenty-five hundred pounds.”

Westmoreland and his men must have done a pretty fair job filling the breech in the dam with those stones, because the repair lasted for more than 30 years.

More sleuthing into the dam story in a September 1947 issue of The Log revealed that a new dam was contemplated by Champion. A brief statement announced the impending project: “Work will soon start on installing a concrete Dam across Pigeon River, just below the site of the old Dam. This is something which has been badly needed for a long time.”

It seems that the Champion Paper and Fibre Company did not waste any time with the project. A report in the January, 1948 edition of The Log states: “Champion Canton’s new intake dam across Pigeon River has been placed in operation. The new dam, a weir type, was constructed to withstand the most devasting flood waters.”

Construction began on the reinforced concrete dam Sept. 15 and was completed Nov. 1. The new project extended approximately 205-feet from abutment to abutment, was 5-feet high, and contained more than 4,400 bags of concrete and approximately 75-tons of reinforcing steel.

Although the dam was built in less than two-months’ time by Champion’s own employees, it has survived until this day, holding back the waters of the Pigeon River and resisting the “most devasting flood waters” for the past 70 years.

‘Well, the Dam is Gone Now’

In the September 1949 issue of The Log, J.E. Slaughter wrote: “On July 5 the old dam, located just a little way upstream from the new concrete dam, was demolished. After having a lot of dynamite strung along the old dam, wires were attached and then a battery was used to set off the blast.”

A wonderful photo taken in 1949 and included in The Log captured the powerful forces of one of the dynamite explosions that demolished the old dam.

Slaughter also observed that: “There must be something like a million bags of sand distributed along the upper side of the old dam, put there to stop leaks from time to time.”

Attempting to ease his readers’ concerns, The Log’s reporter wrote, “Well, the dam is gone now, and our worries are over in regard to the old dam…”

So, it is discovered that the original 1906 dam structure is long gone, blown to kingdom come in 1949. Makes you wonder (not worry) whether some of those huge rocks that Charles Westmoreland’s boys used to repair the dam in 1916 or a few of those “million bags of sand” are still at the bottom of the river, somewhere. I’ll bet they are, and many Pigeon River brim and red-eyed bass are happy to call them “home.”

Local author Carroll C. Jones was born and raised in the papermill town of Canton, located in the heart of Western North Carolina’s mountains. He is descended from the Hargrove, Cathey, Shook, Moore, and Crymes families who pioneered Haywood County. His latest book is titled Thomson’s Pulp Mill: Building the Champion Fibre Company at Canton, N.C.—1905 to 1908. Find out more about Carroll’s at www.carrolljones.weebly.com.