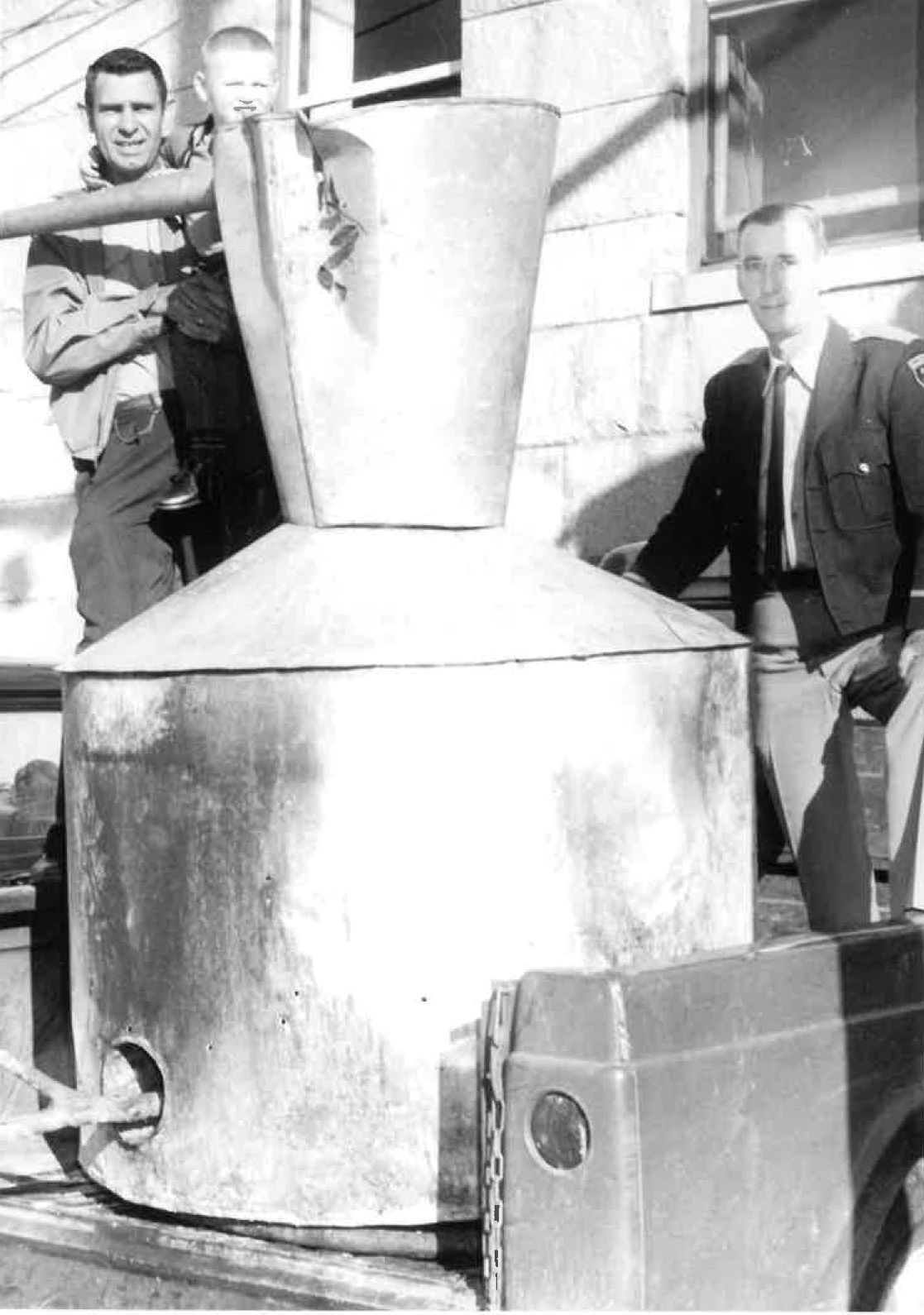 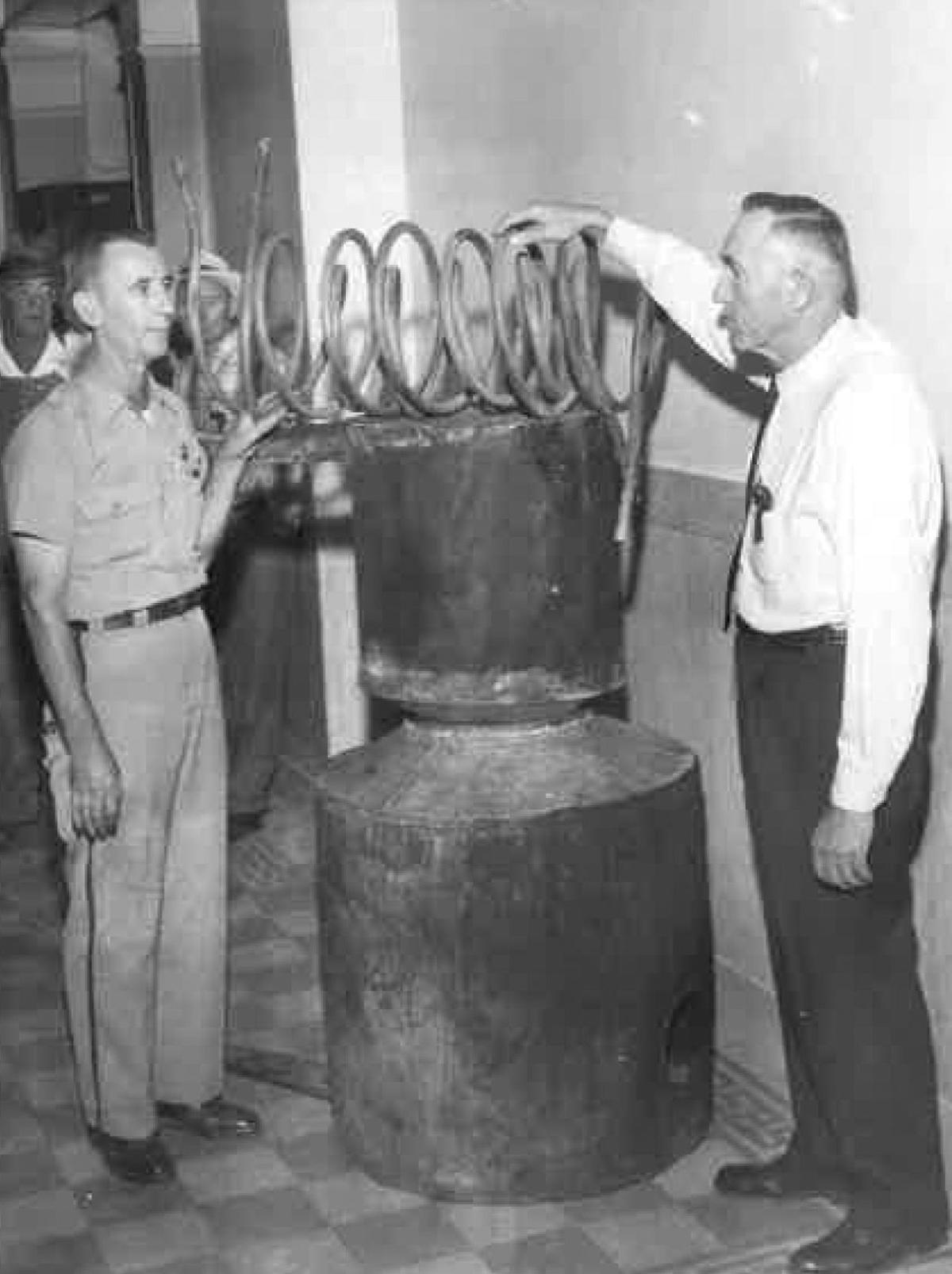 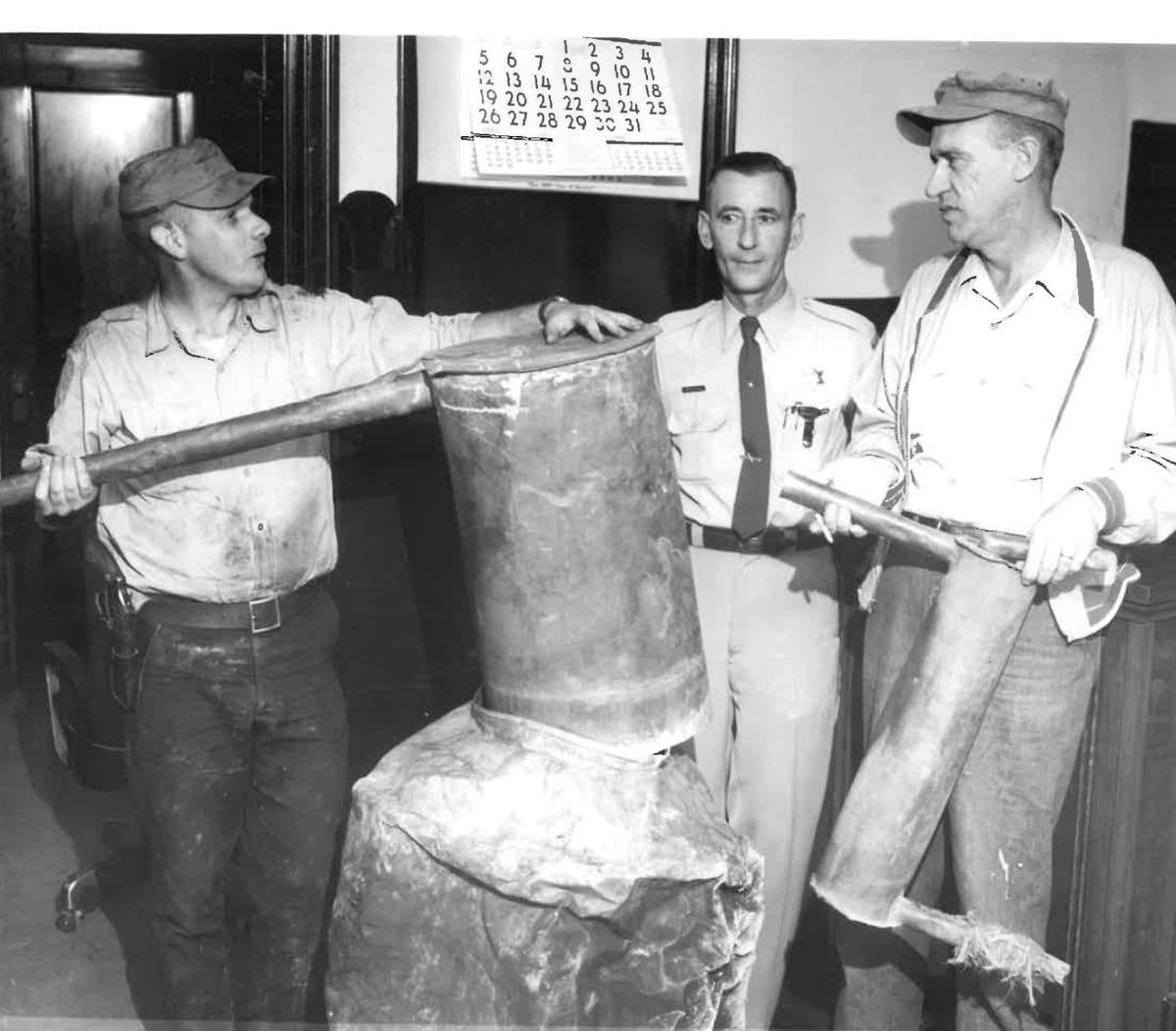 This 1963 file photo shows Haywood County Chief Deputy Gene McCracken in the center, according to Martha Rector, McCracken’s daughter. The other two men were not identified in The Mountaineer files. 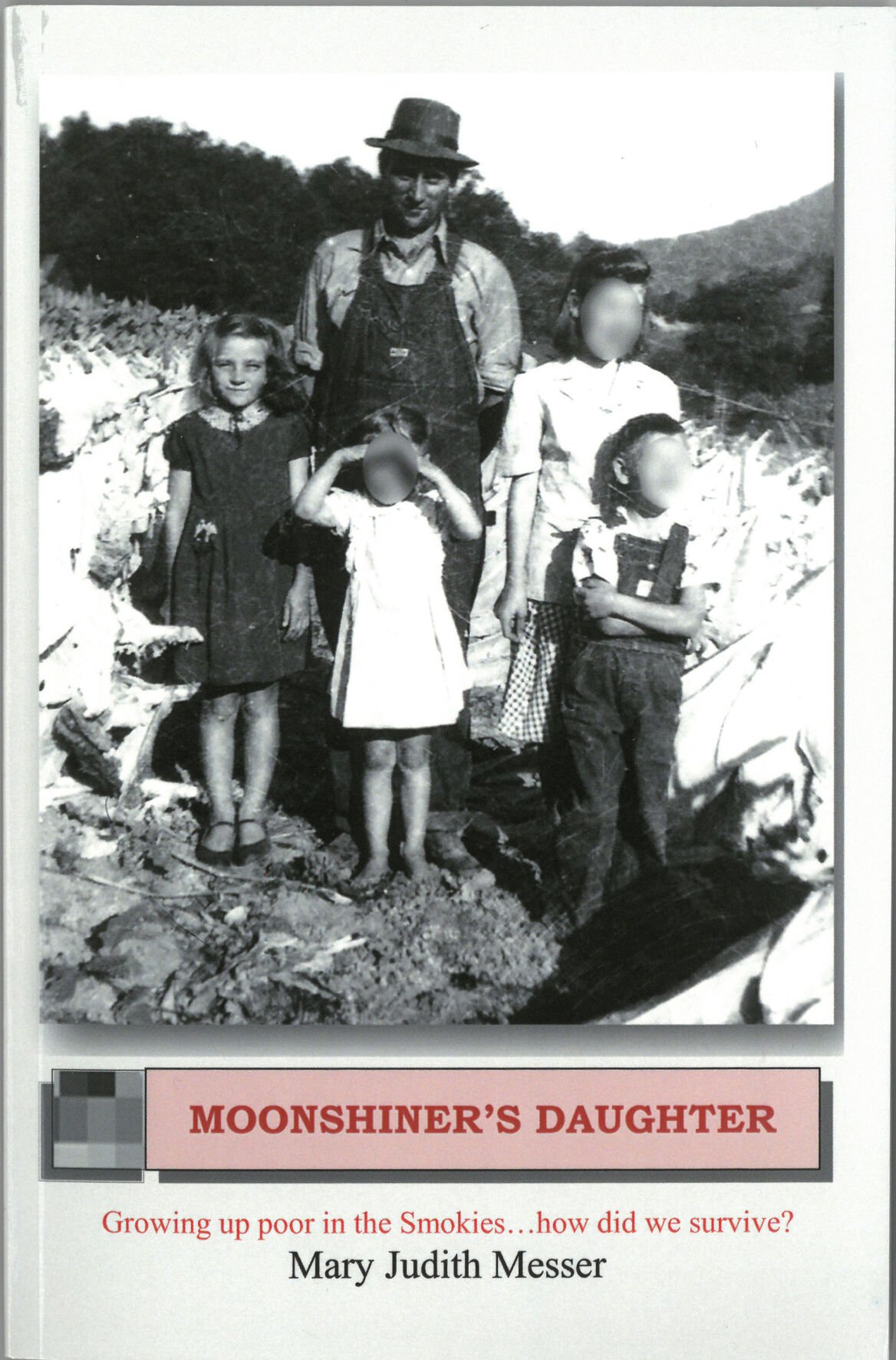 FAMILY LEGACY — “Moonshiner’s Daughter” tells the story of a violent and poverty-stricken childhood. Mary Judith Messer stands far left on the book’s cover with her father. Mary’s siblings, whose faces are obscured, stand with them.

This 1963 file photo shows Haywood County Chief Deputy Gene McCracken in the center, according to Martha Rector, McCracken’s daughter. The other two men were not identified in The Mountaineer files.

FAMILY LEGACY — “Moonshiner’s Daughter” tells the story of a violent and poverty-stricken childhood. Mary Judith Messer stands far left on the book’s cover with her father. Mary’s siblings, whose faces are obscured, stand with them.

Thanks to the brilliant marketing of the late Marvin “Popcorn” Sutton, and the clever marketing after his death by Maggie Valley entrepreneurs, mountain moonshining’s reputation as a romantic and exciting venture has thrived in Haywood County.

But the history of moonshine is not all mischievous flaunting of federal law, copper stills in high mountain backwoods, car chases and artistic endeavor. It does take a skillful moonshiner to make a quality product, but not all moonshine was top quality. And sometimes even the skillful ones fell prey to their product.

Take the story told by Mary Judith Messer in “Moonshiner’s Daughter,” a brutal account of growing up desperately poor in Haywood County during the 1940s. Her father, she wrote, taught the famous Popcorn Sutton the craft of moonshining. But her father also was an alcoholic whose addiction to his product kept his family in desperation, despite his hard work. While many moonshiners were not as brutal as Messer’s father, moonshine, both its making and consumption, clearly contributed to a miserable childhood. Messer’s father, she wrote, drank much of the moonshine he produced and could be a brutal abuser, intoxicated or sober. But during his drunken spells, she adds, he was much quicker to strike out, with rocks, sticks, or his booted feet.

Messer describes vividly the violence that went on in her home, and while moonshining could not be blamed for her father’s brutality, it did fuel his rage.

In one account, her father “went to town for some reason. He was gone almost all day. When he came back, we could tell the way he was walking, he was drunk. … As he got closer to us, he bent down and picked up a rock. Cheryl and I jumped to our feet as he entered the shack.

“I ran to the door as he closed it in front of me and it knocked me back into the yard. … We all ran around the shack, crying….We heard Mama scream from outside the door, Daddy’s blows made a sickening sound. … He beat Mama’s head bloody, her face and eye was black and blue for months. We later found out someone in town had told him that when Mama had gone to town to buy his sugar, she was in a car with some man.”

Then there was the Christmas their father showed up drunk to the holiday dinner. When he grabbed the shotgun, mother and children ran outside and hid in a barn loft, hungry and cold. Next morning, the children found their Christmas feast on the floor, every window shot out of their shack, their food full of glass shards.

One might think that when their father was imprisoned for moonshining, the children would find life easier, given that they escaped his beatings. In fact, Messer writes, the family was so poor then that they found it hard to survive. Moonshine made it dangerous to live with her father; imprisonment for moonshining made them desperately hungry and cold.

A violent businessPerhaps it is no coincidence that the most murderous period in Haywood County history, the early 1930s, took place during the close of Prohibition. In one 12-month period bridging 1932 to 1933, Haywood County Superior Court prosecutors tried 13 men for 10 killings, with 11 of those men found guilty. In two of the murders, men killed their wives, and another was a trespassing dispute. Among the remaining cases, newspaper reports leave the motives unclear but hint that liquor and moonshine stills may have been behind some of the killings. The late Carl Bryson, who died at age 108 and was a sheriff’s deputy during the 1930s, said in a 1998 interview that he recalled several moonshine-related killings during his time as an officer.

One bootlegger, who spent years transporting illegal liquor in the 1930s but did not manufacture it, never owned a gun by choice. In a 1999 Mountaineer story, the man who wished to remain unnamed for the sake of his grandchildren, told how he realized he needed to make his runs without weapons:

“He made that decision one day when one of his relatives and suppliers gave him a bunch of bad liquor. He wanted his money back and with another relative went to confront the supplier. The second relative had given him a gun, and he stayed up on the hill while the cousin intercepted the swindler’s car and talked him into refunding the money. The bootlegger later realized that he’d been mad enough to shoot and kill the man, had he not backed down. That scared him, and he didn’t carry a gun after that.”

Not everyone was so careful. Messer’s father would spend days and nights in the woods when he was making a run of moonshine. “One day Mama needed him real bad. She told Cheryl and me to go fetch him,” Messer wrote. “We all knew where his still was, for we were made to help carry in sugar and meal lots of times. Cheryl and I were getting near where the still was, when a bullet slammed into a tree just above our heads.

“He was hiding behind this big log. He jumped up and came running out, shouting, ‘What in the hell are you doing coming up here like this? I almost shot you! From now on, let me know who you are or you will be killed.’ ”

Messer also described how her father buried some of his moonshine jars in the tobacco field and heard law officers searching the field one night. After he fired his shotgun repeatedly at the sheriff and deputy searching the field, he took to the woods for 12 days for fear of arrest.

Money-making legacyMesser writes that her father taught a “really skinny fifteen year old kid” to make moonshine, though he was mean to the teenager, making him do the hard labor and rarely rewarding him with anything other than a pint of moonshine. That kid was Marvin “Popcorn” Sutton. She said that Popcorn said of her father, “That man was mean as hell, but he did give me a good money making occupation.”

Messer was rescued from the worst of her abuse when she went to live with the Queens of Queens Farm at age 16. She later moved to New York before returning to Haywood County, where she married and raised three sons, describing her husband as the best of men. Two years ago she also reunited with a daughter, the result of an assault, whom she had given up for adoption while in New York, and they remain in touch.

This year marks the 10th anniversary of her book, “Moonshiner’s Daughter.” Her friend and collaborator, Buffy Queen, said the book remains popular, largely in part because it is a story few have told but many have experienced of extreme poverty, abuse, discrimination — and survival.

To this day, Messer cannot abide the smell of moonshine or any other type of alcoholic beverage. It brings back too many memories, she said, makes her flash back to the smell on her dad’s breath the day he took a rock to her mama’s head. Some customers who visit her Mauney Cove bookstore see the sign for Moonshiner’s Daughter and ask the wrong question.

“They said, ‘You don’t have any of that good moonshine around?’ and I say, ‘No, no, no. It makes me physically sick to smell it,’” Messer said.

Moonshiner’s Daughter is available in local bookstores and can be obtained at her Bargain Book Shop in Mauney Cove. For information, call 828-452-2539.