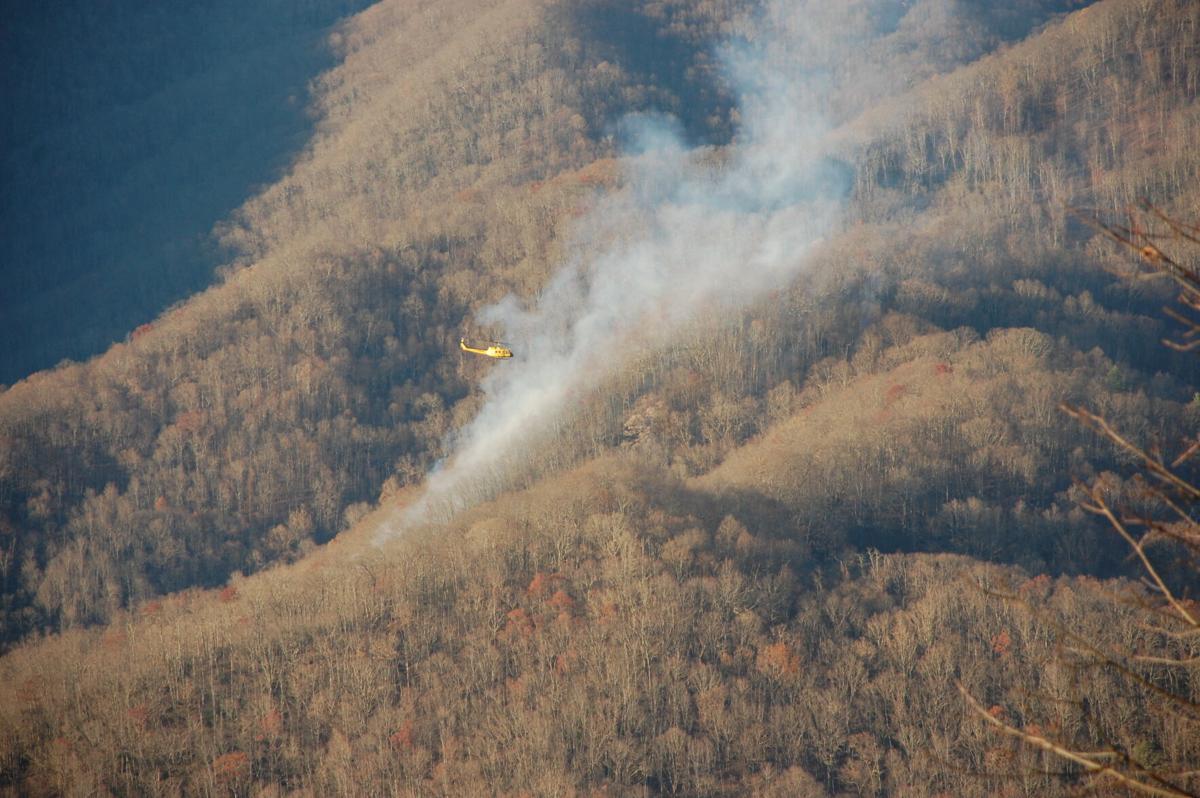 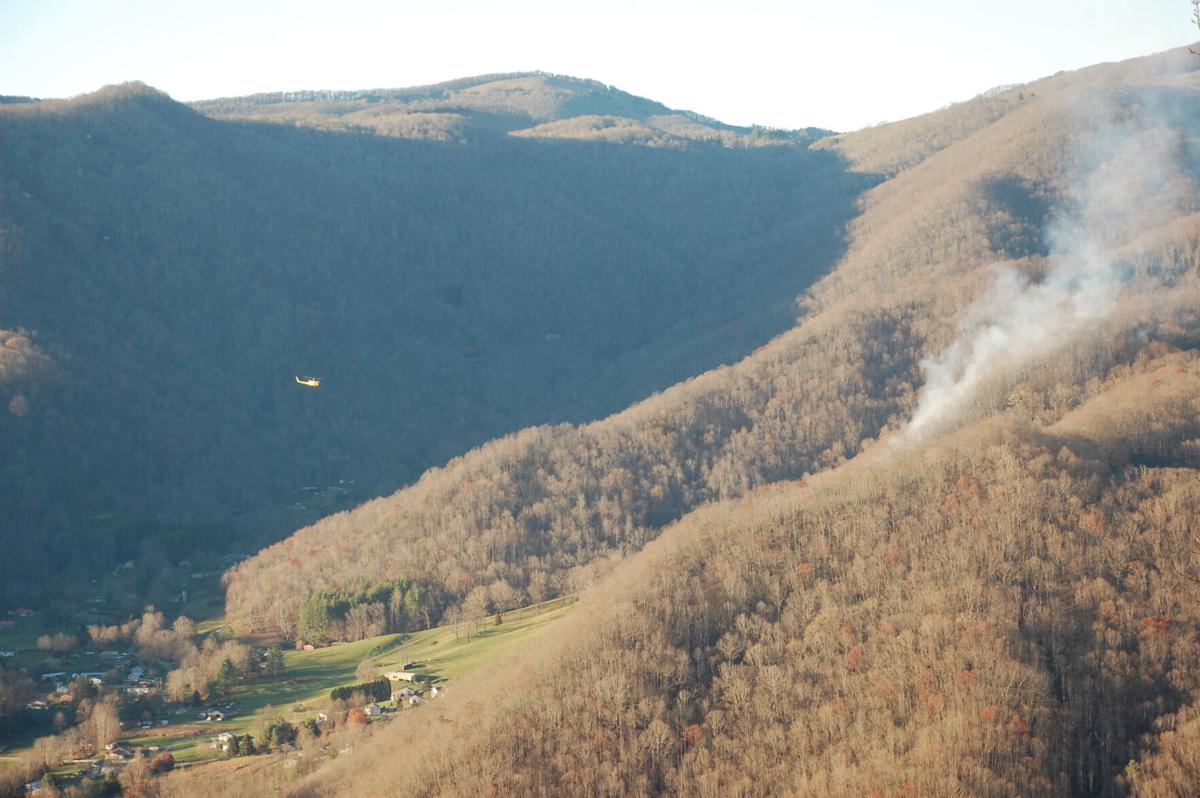 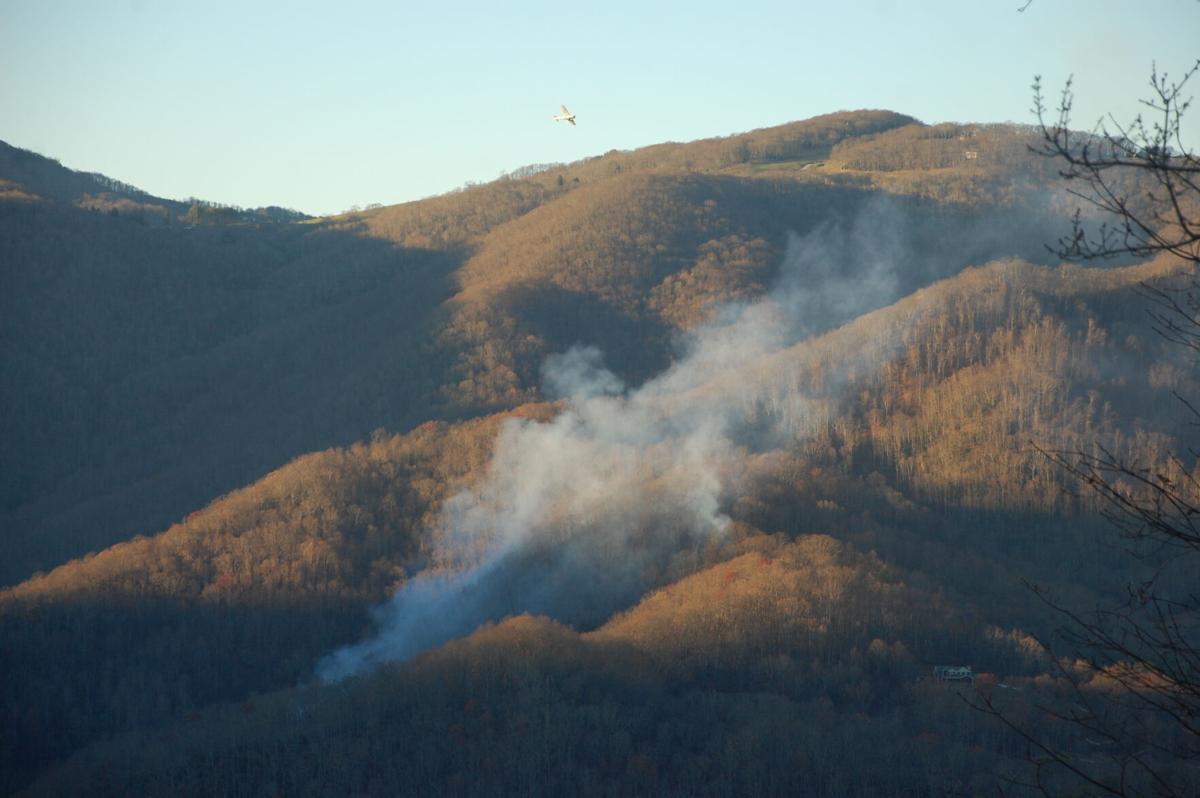 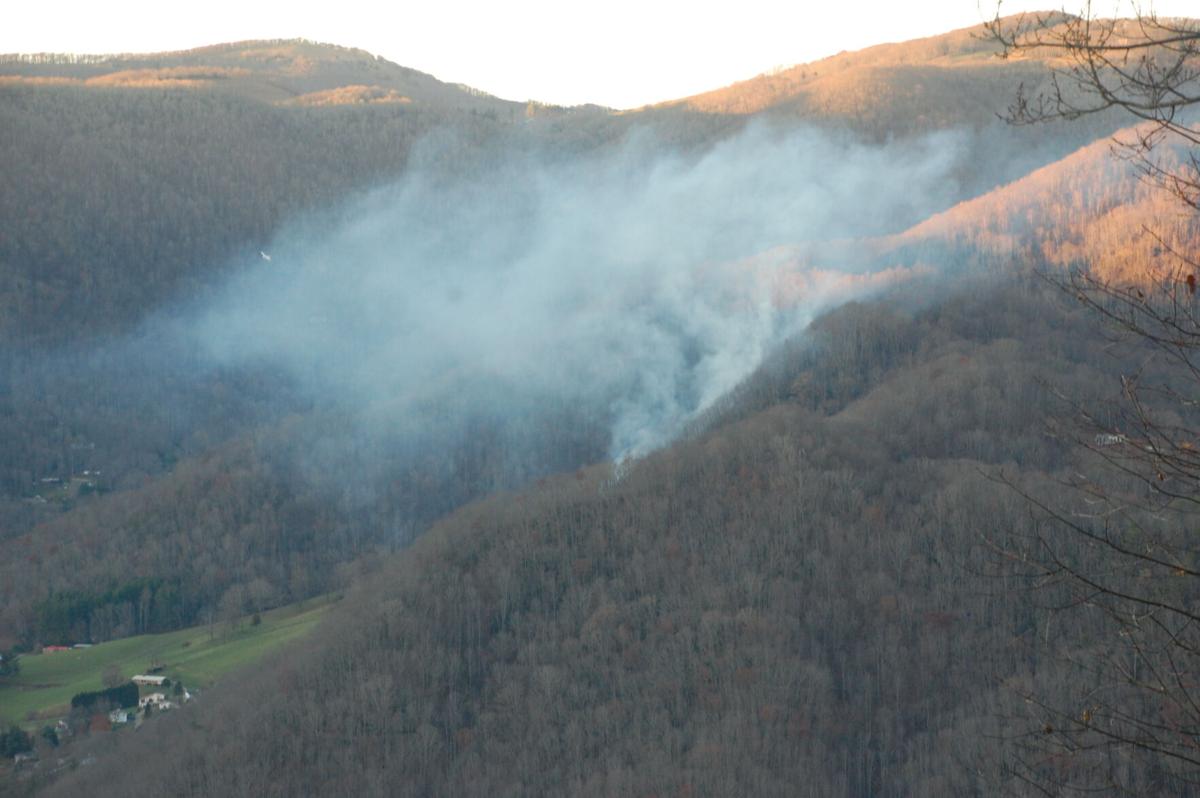 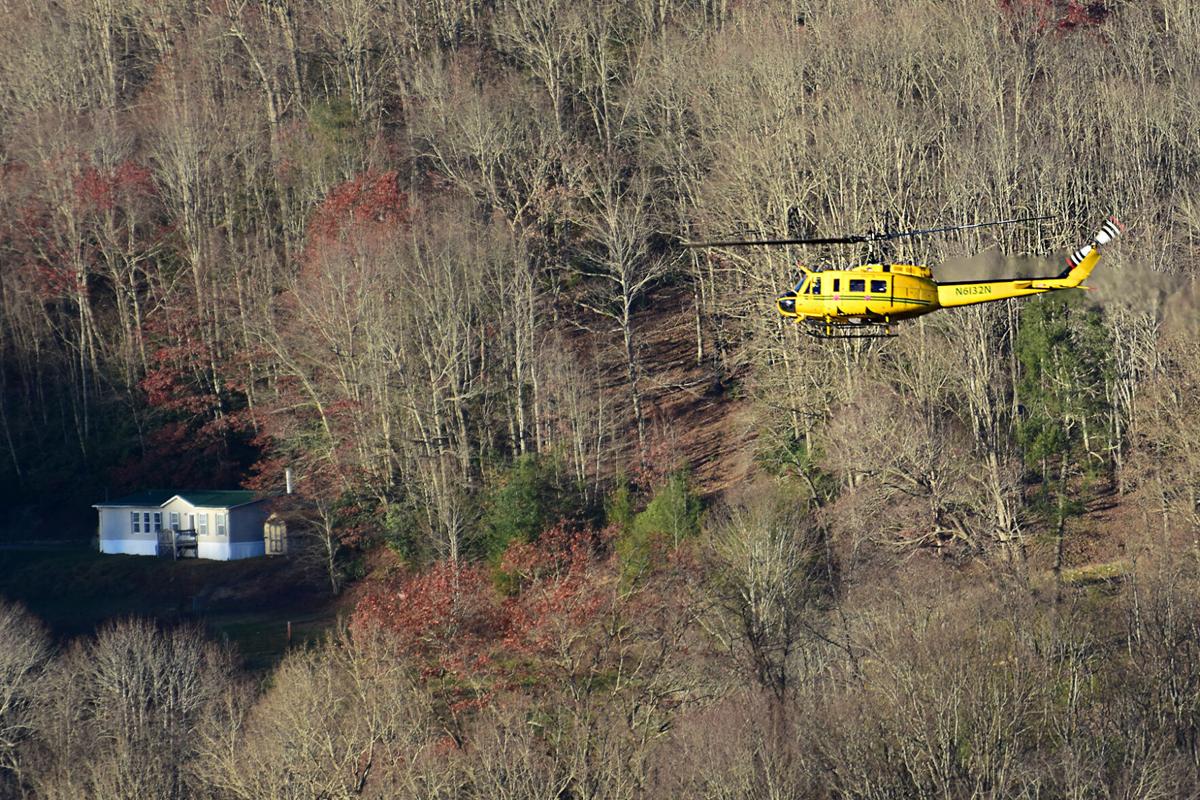 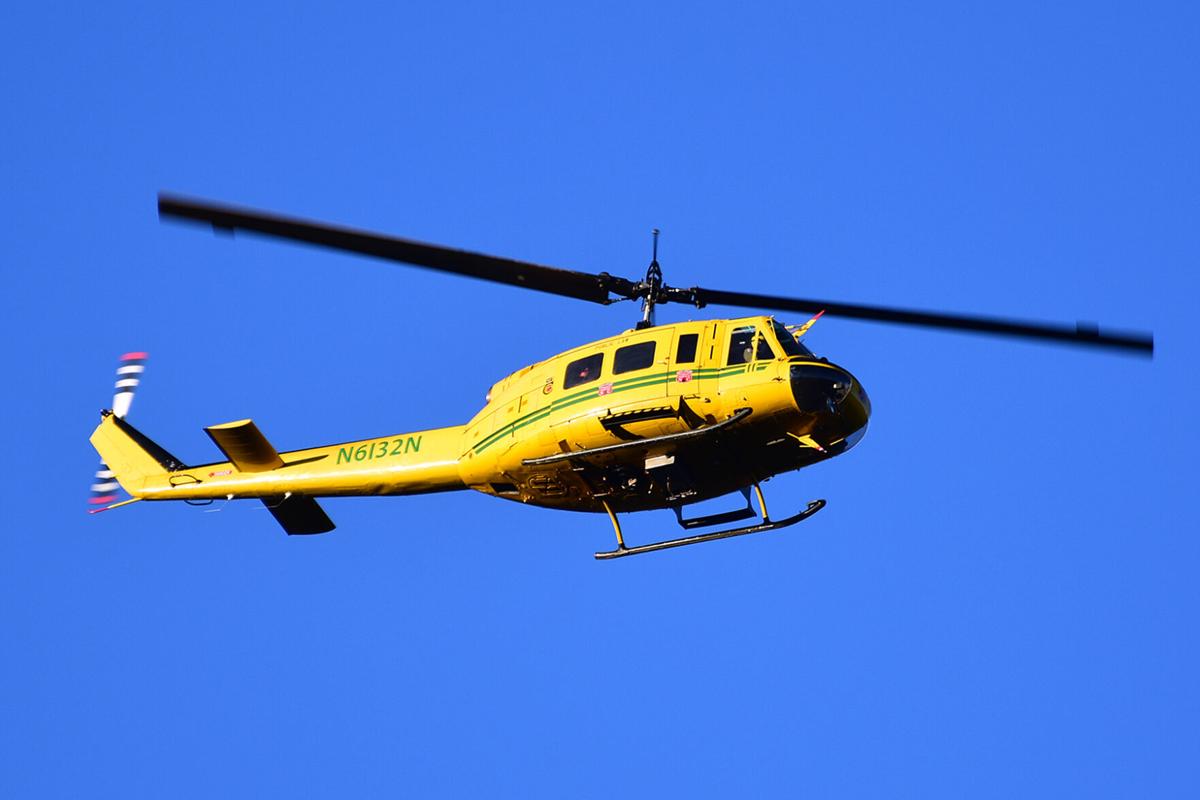 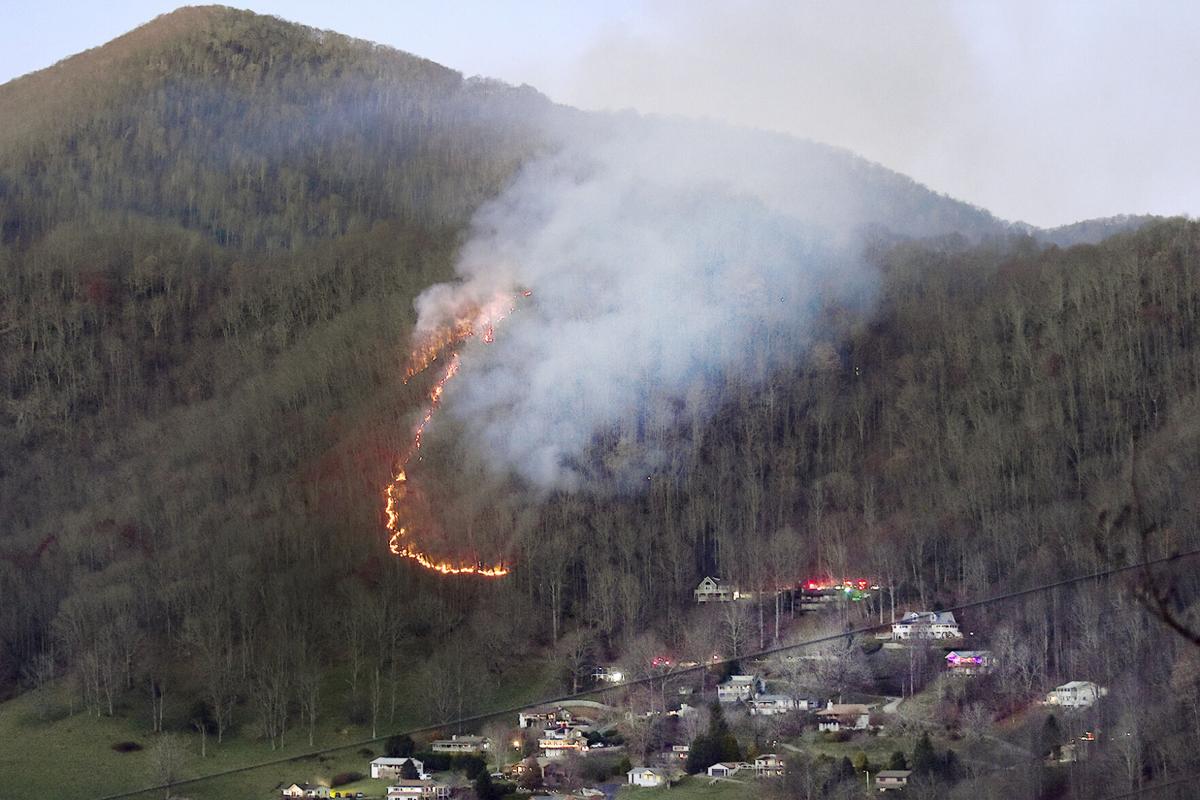 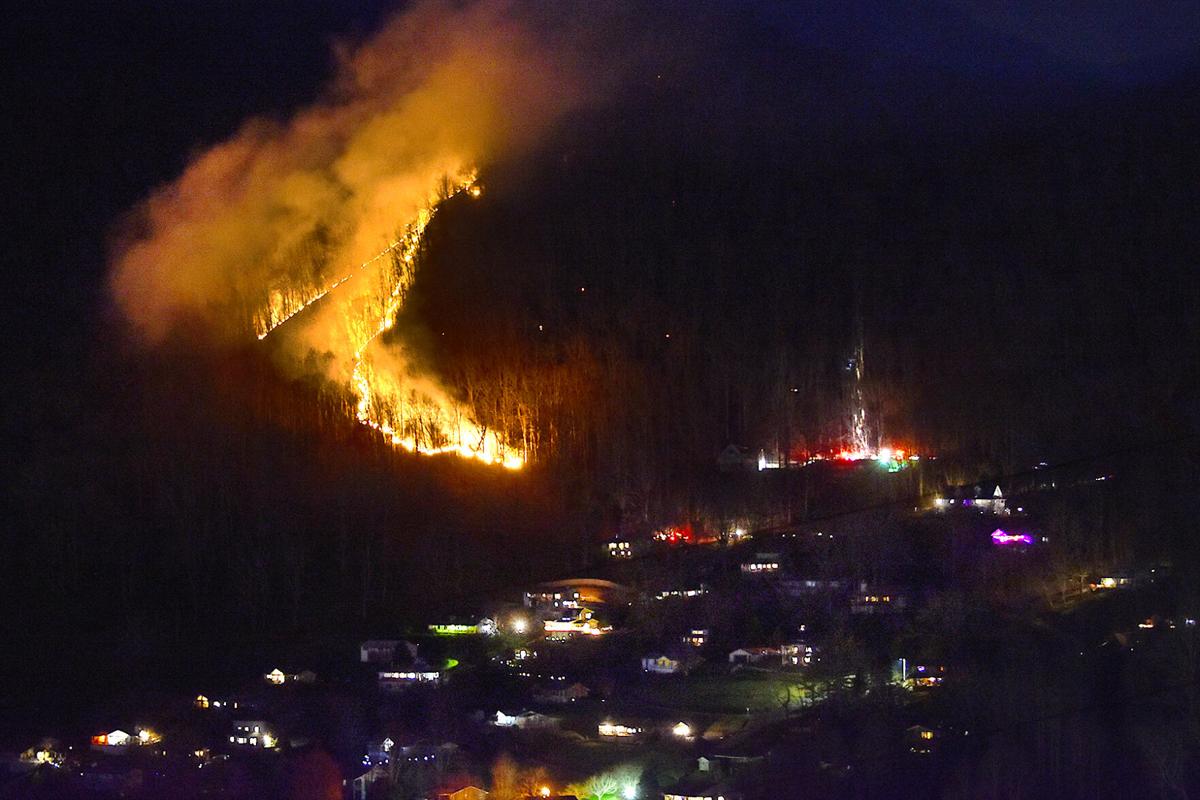 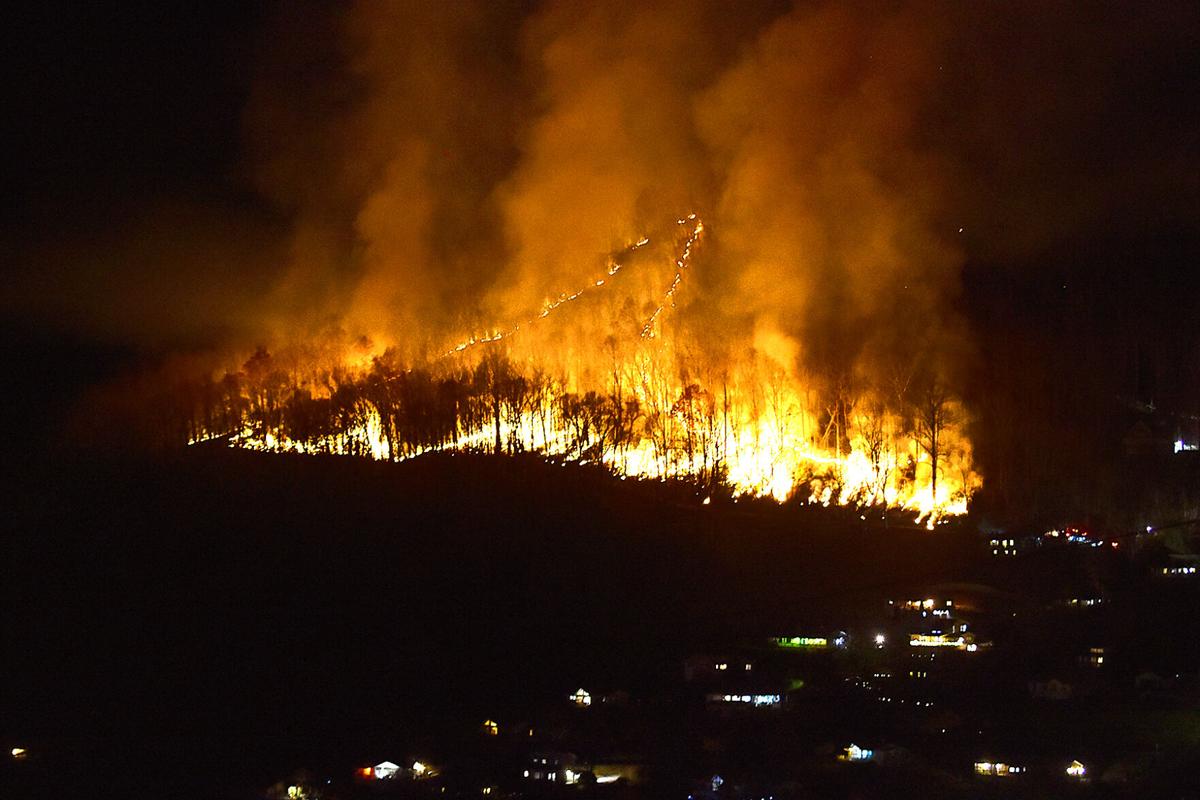 REMOTE BLAZE — The only way to get water up the mountain past the highest road was to bring it in via helicopter. 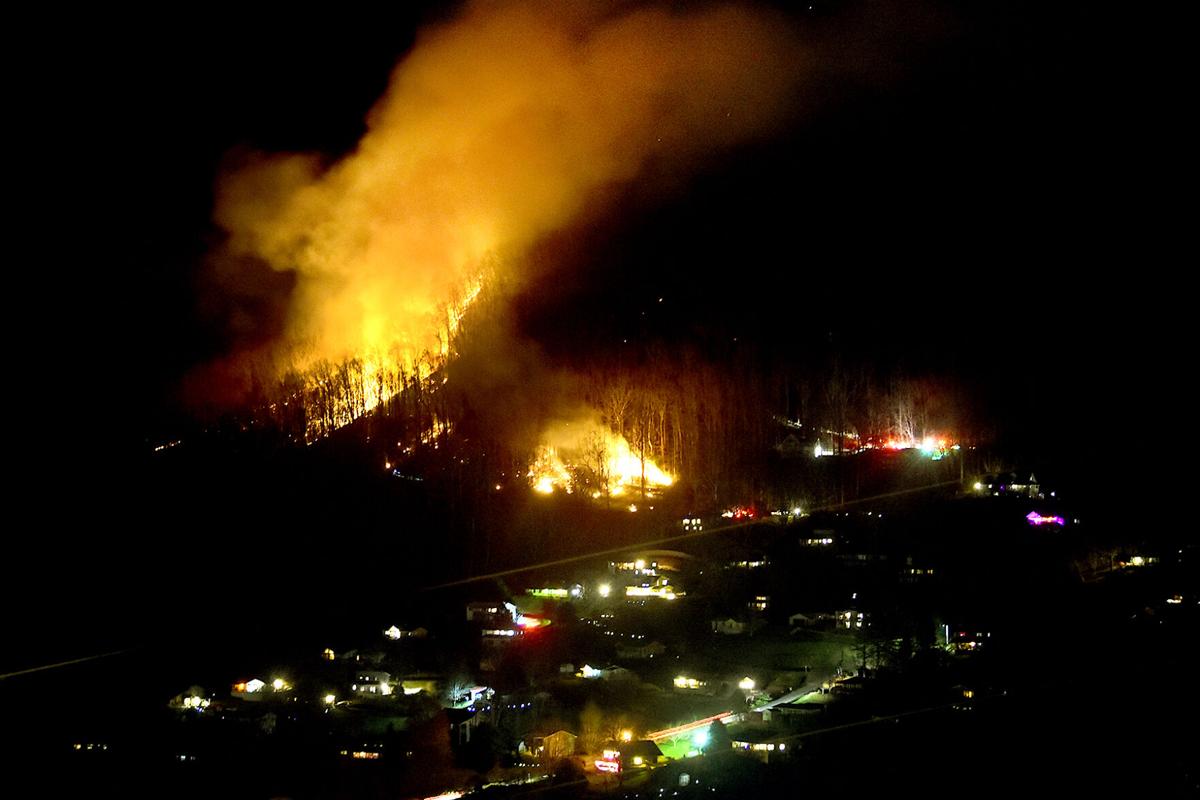 REMOTE BLAZE — The only way to get water up the mountain past the highest road was to bring it in via helicopter.

MAGGIE VALLEY — A fire broke out in the Evans Cove area near Maggie Valley Monday afternoon that ultimately scorched 8-10 acres.

The town’s fire department was dispatched to the scene at about 1:54 p.m. Maggie Valley Fire Chief Chris Carver said the blaze began when someone was burning leaves and things got out of control.

While the fire started in the area above “The Knolls” subdivision, Carver said when first responders arrived, there was only one house in danger.

“We got it put out around the house, but the fire went on up through the woods,” he said.

From there, the battle to establish a line in the steep, rugged terrain began. Fortunately for those firefighters working to stop the blaze, within about an hour, the North Carolina Forest Service sent help, including a plane to monitor the path of the fire from above and a helicopter equipped to dump water.

“It was spreading pretty good, so that water really helped,” Carver said.

Per state regulations, helicopter operations must be halted at sundown, so fortunately for Carver and crew, by the time the sun started to go down, the first was contained and mostly out.

“I’d say by 5 it was mainly under control,” Carver said.

After that, those on the scene began controlled burns to ensure leftover brush and leaves were no longer a threat, should the fire kick back up. Carver noted that additional operations continued through Tuesday, which generated some smoke.

“There’s a few little snags still burning, so they’re going to put them out,” he said.

Nearby resident Debbie Edwards Fisher first noticed the smoke when she and her husband, Randy, got home Monday afternoon around 2 p.m. She said they live two streets below where the fire originated.

“When we turned onto Evans Cove, two pickup trucks with equipment pulled up and flashed their lights,” she said. “We pulled over and they went roaring past.”

“I know I came inside and sat down and started doing some reading,” she said. “At about 4, I heard a helicopter out there. When I went outside, Randy said they already dumped two loads of water.”

Randy went up the mountain to see what was going on.

“Firefighters had gotten there shortly before that,” he said. “It had not spread up the mountain at that point. They were blowing leaves to create a break for the fire, but it didn’t work all the way.”

The fire spread upward until shortly after dusk when Carver said it was under control, at which point a Haywood Alerts message went out.

“From Haywood County Emergency Service: Fire Crews are currently on-scene of a brush fire in the Evens Cove Area of Maggie Valley. This fire is currently contained. Crews are working on burn-out operations that will last throughout the evening. Do Not Call 911 unless you see flames that are directly threatening your residence,” that alert read.

But Fisher said she never received that alert, and as the back-burns continued and the darkness gave her a better chance to see the flames, she became fearful.

“It looked like the whole mountain was on fire when they did the back-burn, but it worked,” she said. “I would say the flames were 100 yards away probably.”

“It scared me,” she added. “I thought of Gatlinburg.”

“The flames grew and then people were sending me pics from all over town and they could see a whole lot more than I could,” Fisher said. “I grew concerned, and a friend of mine called and said, ‘I can come by and get the dogs if you need to evacuate.’ I know our neighbor who’s in his 80s had to call his son to help him get out.”

“A lot of people were getting scared because they saw the flames kicking up, but they were burning what was already burnt, and it was under control,” Carver said.

Despite her fears and the lack of information flowing her way, Fisher said she was still happy with how hard firefighters worked to minimize the spread of the blaze and protect property.

“We are so grateful to all the people who went up there and put their lives on the line,” she said.

Carver said it’s important for folks looking to burn brush to keep a few basics in mind. First and foremost, anyone wanting to burn anything needs to obtain a burn permit. While it can be done online, Carver recommended it be obtained from the fire station.

Once someone is ready to burn, the first thing to consider is how windy it is. Carver said he would never advise burning anything on breezy days like what the county has seen over the last week or so. In fact, he said he wouldn’t recommend anyone burn anything until the area gets some fresh rain.

“We’ve had plenty of rain this year, but still when that wind blows like that, it doesn’t matter much,” he said.

Carver also said it’s important to not only clear debris from around the area where the burn will take place but to also have a plan in case flames do spread.

“I wouldn’t have it close to my house, but close enough a water hose can get to it so if it kicks up they can wet it down,” he said. “And make sure you blow the leaves away from your house.”