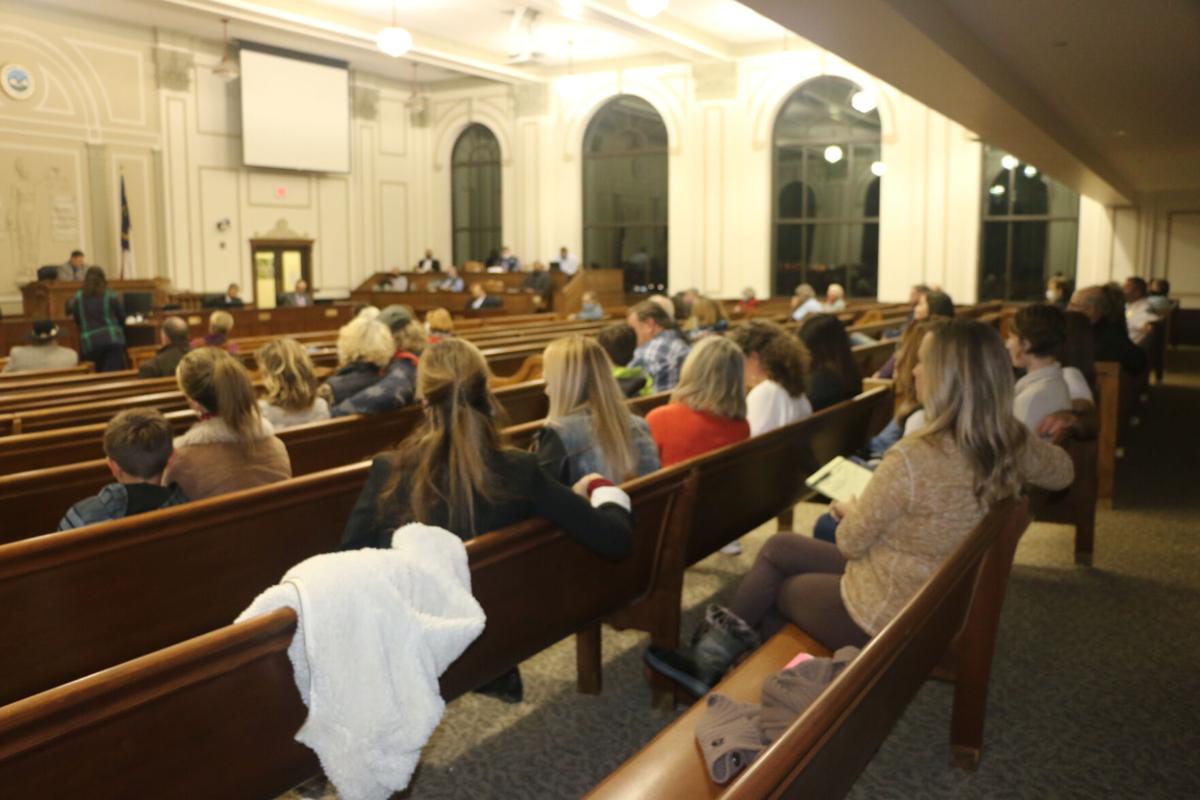 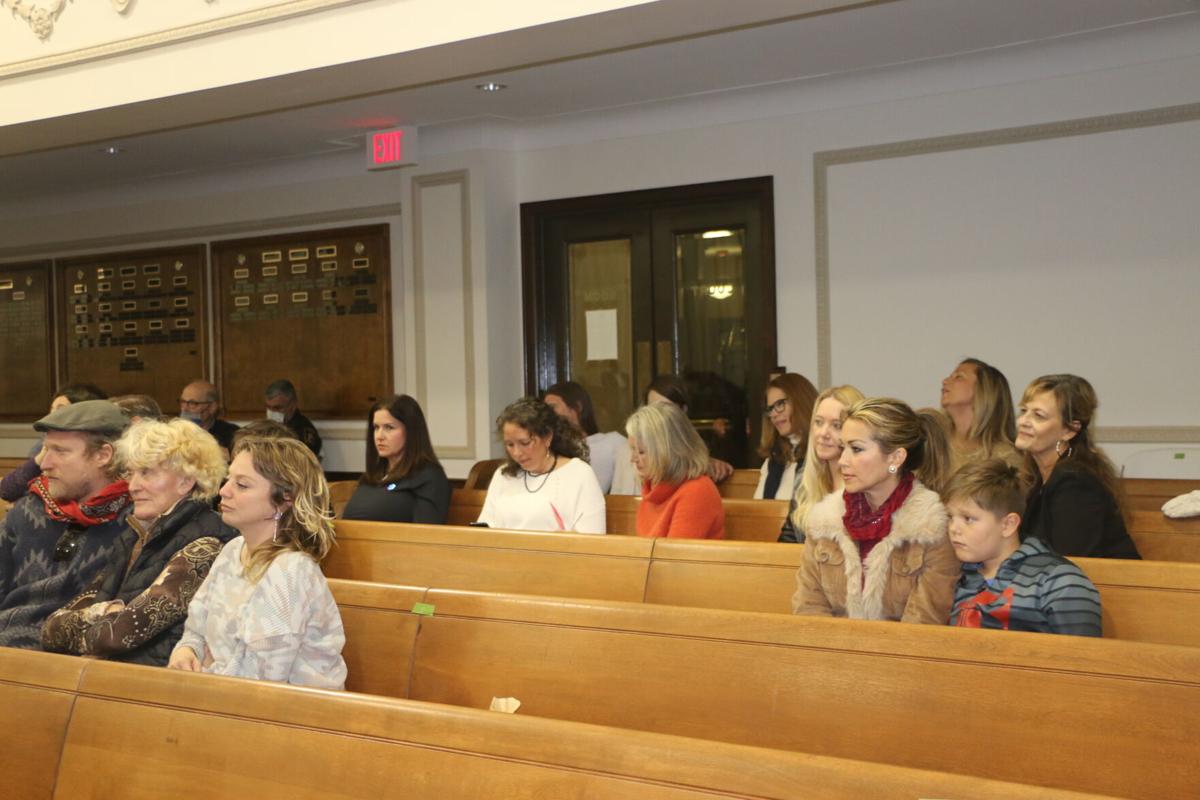 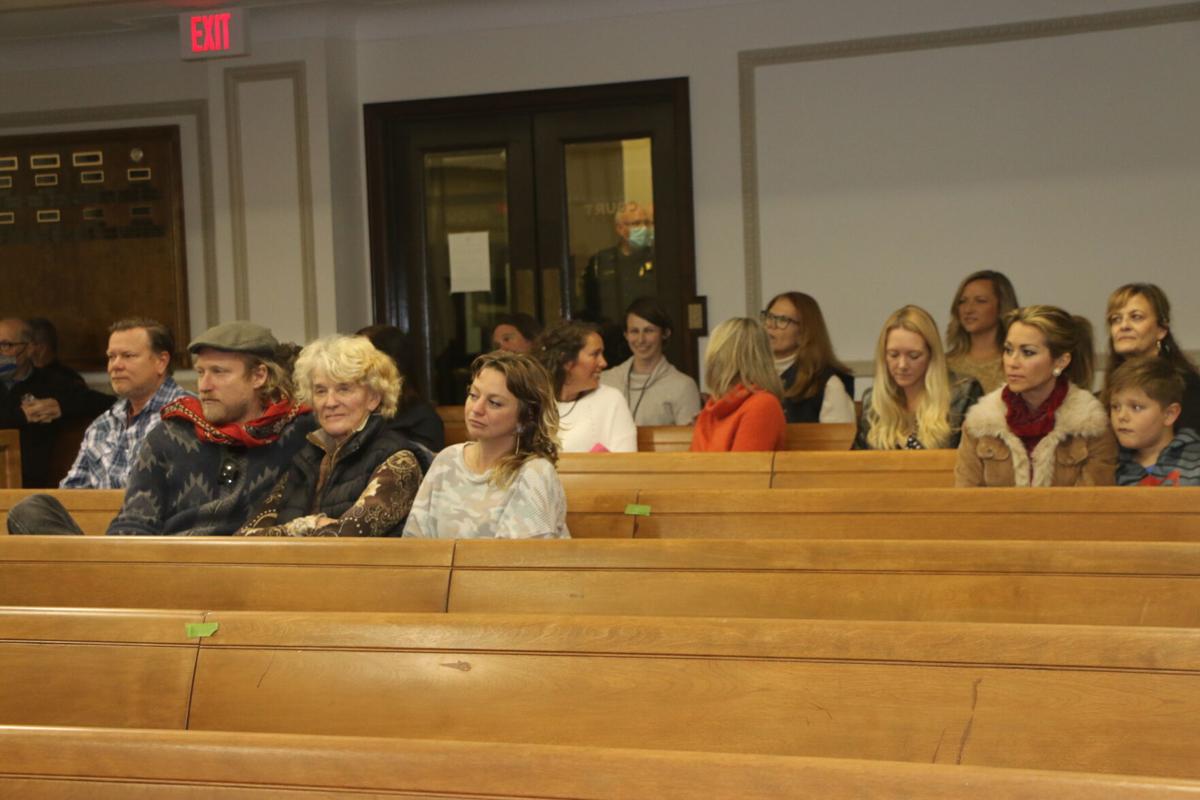 NO MASK SECTION — When the commissioners heard that a contingency wanted to speak at the Monday meeting and would likely object to wearing a mask, county leaders decided to allow them in as long as they sat in a group in the back. 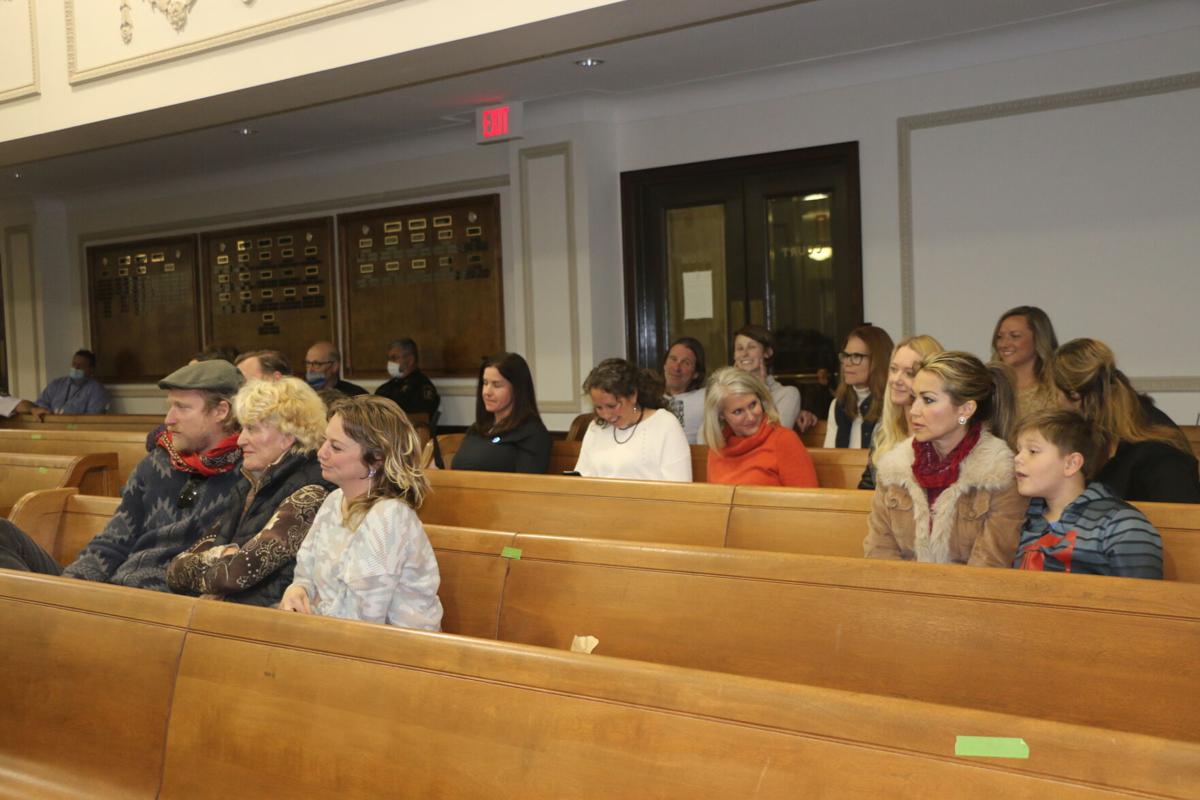 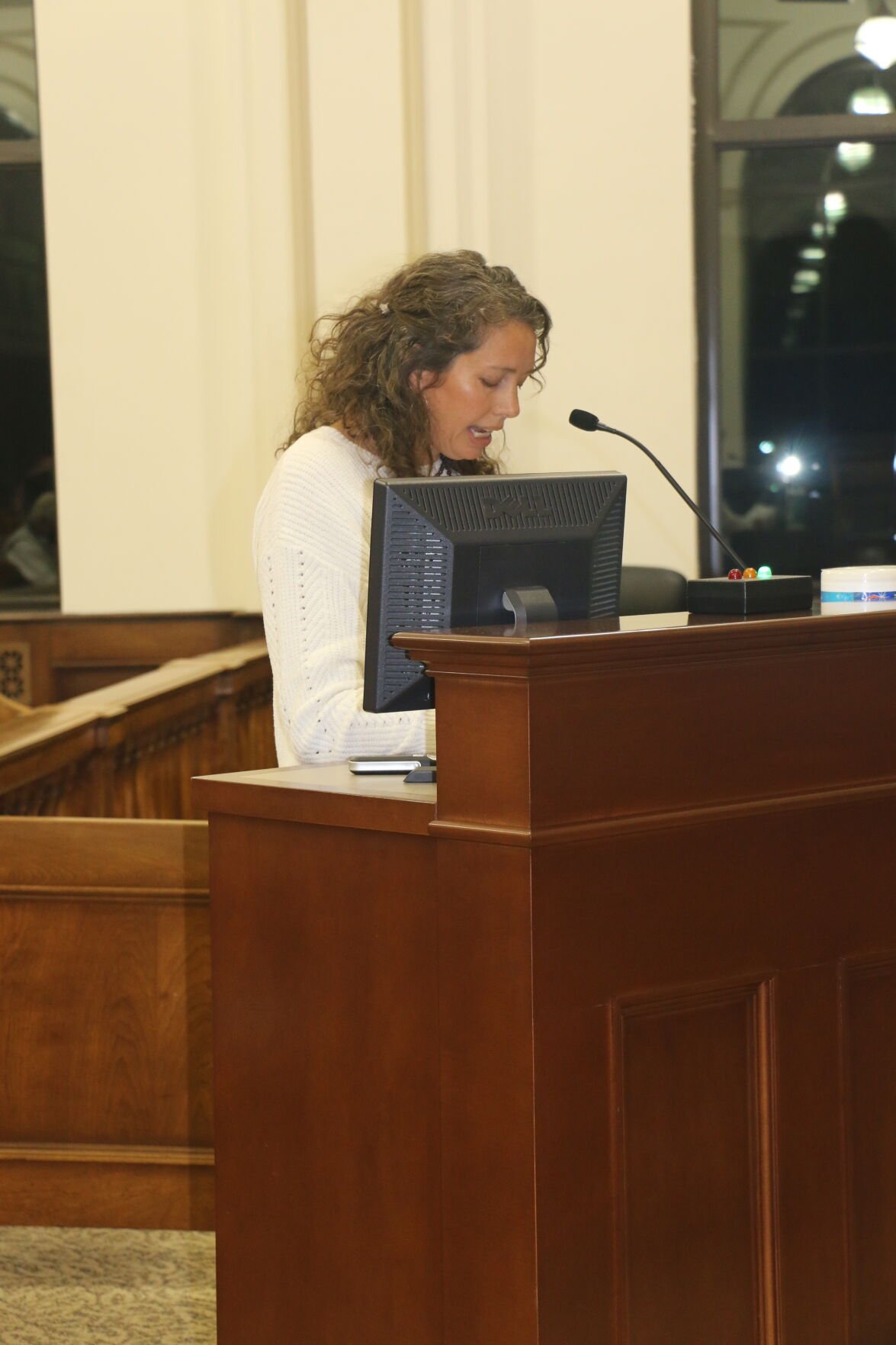 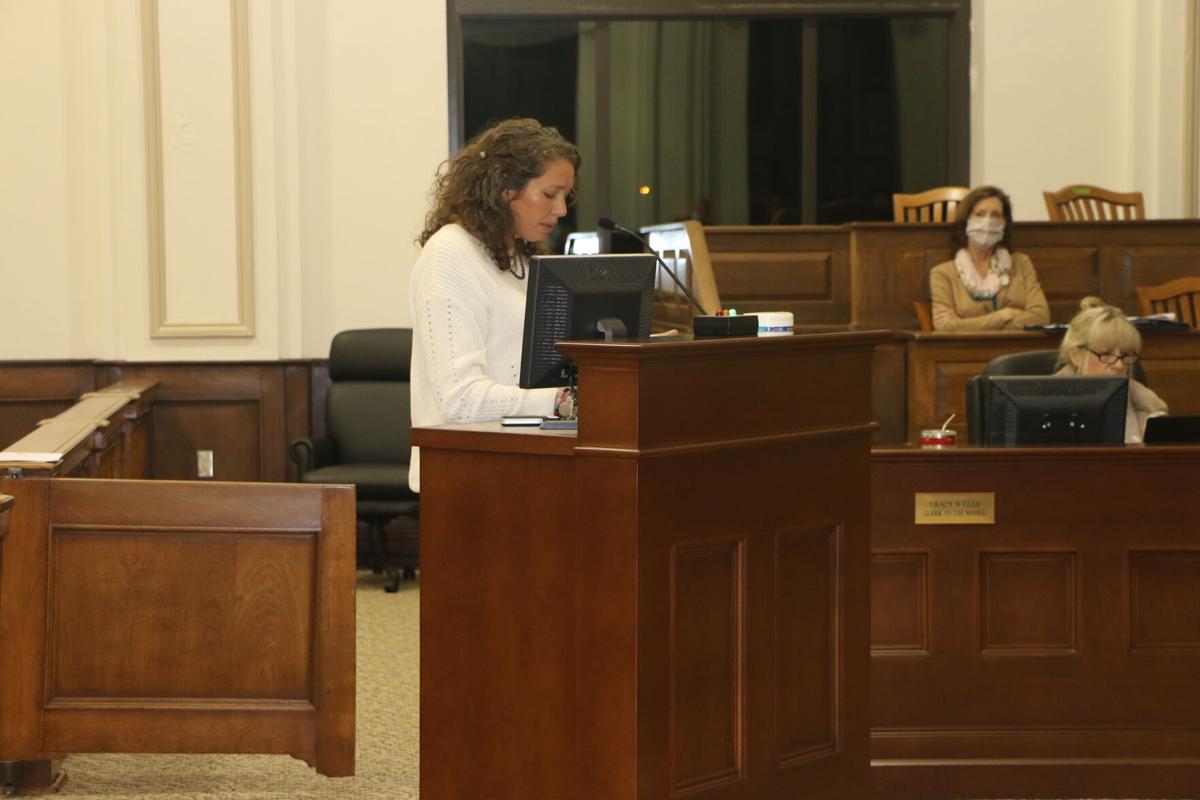 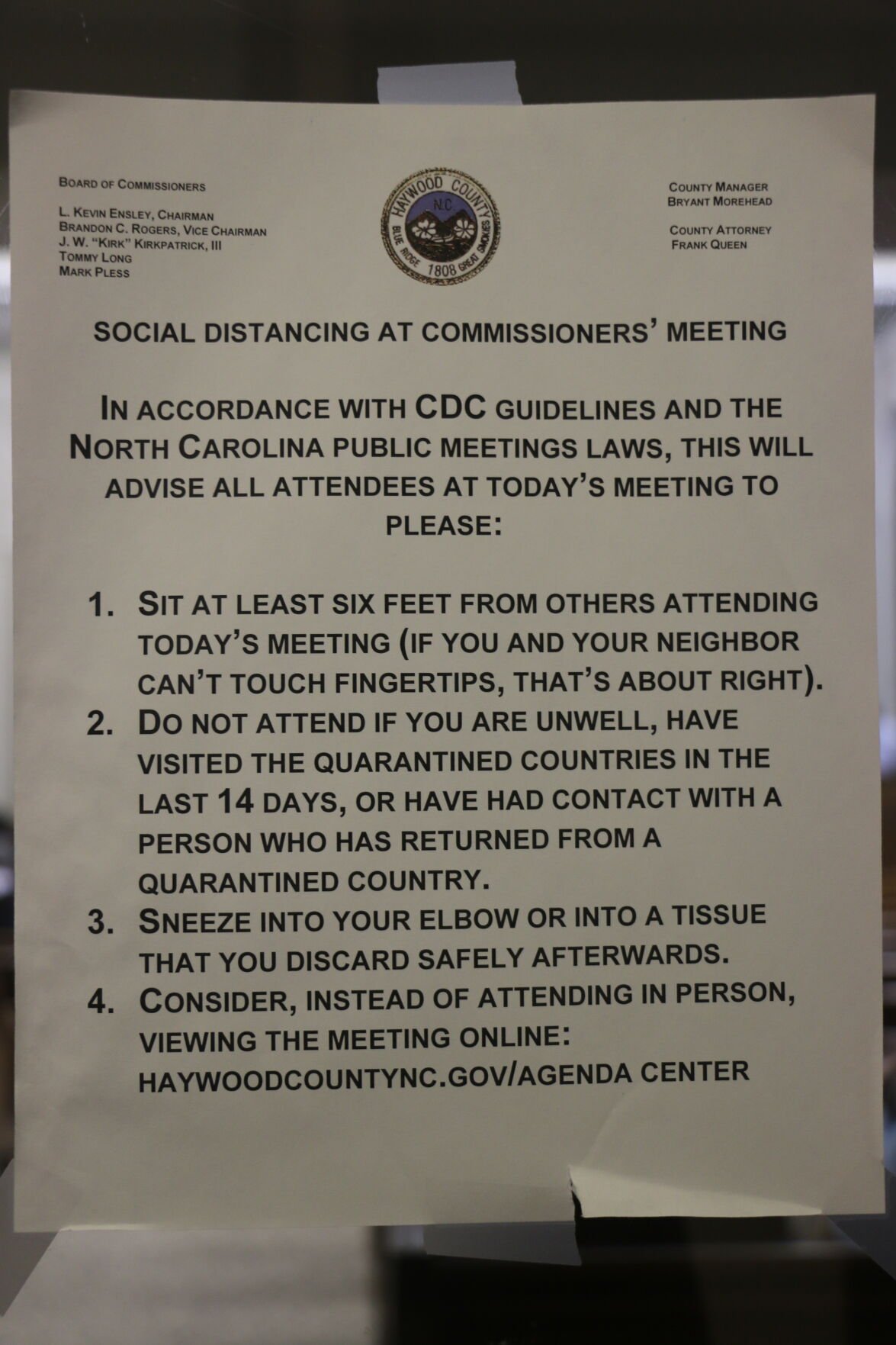 NO MASK SECTION — When the commissioners heard that a contingency wanted to speak at the Monday meeting and would likely object to wearing a mask, county leaders decided to allow them in as long as they sat in a group in the back.

The Haywood County Board of Commissioners spent a portion of their Monday evening meeting trying to dispel fears that a renovated Clyde armory would be used to detain individuals who refused to wear masks or be vaccinated.

During the public comment period, several individuals raised questions about the Clyde armory grant application discussed during the previous two board meetings.

The lion’s share of county’s $743,000 grant application for funds authorized by federal COVID relief legislation is to renovate the Clyde armory for use as an EMS base, a recreation area for Haywood Community College classes and as an emergency shelter during flooding or snowstorms.

The current shelter isn’t large enough to allow for social distancing under COVID guidelines, a topic Commission Chairman Kevin Ensley said was listed as part of the application to boost the county’s chances of the project being funded.

“So you’re not looking at it as COVID internment — that’s the word that is out,” said Bill Davis, who spoke up first.

Several speakers addressed actions violating individual rights happening in other countries and questioned if accepting the federal funds could come with strings attached.

“With money you’re getting to convert this facility being tied to COVID, will the facility will be considered a green zone facility where the plan is to isolate people who are COVID positive or at risk or those refuse to follow stipulations?” asked Melanie Williams. “What happens to those of us who won’t comply? How can we be safe? This is a significant concern.”

Others speaking during the public comment segment of the meeting dovetailed on the topic, asking whether healthy people would be taken from their home and isolated at the facility or kept there if they refuse to be vaccinated. Several said they had researched the grant conditions and federal guidelines and found areas suggesting the facility could be used for internment.

Joseph Thomas spoke about a belief that wearing a mask covers a face created in the image of God while Stephanie Carsons expressed fear the COVID-19 vaccine could contain a hydrogel with a light tattoo enabling the government to monitor individual choices.

David Francis, the county’s special projects administrator was co-author of the grant and addressed citizen concerns by reiterating the major provisions of the grant application, none of which had anything to do with housing individuals against their will. He later said the grant’s narrative is quite clear, and reading anything more into it as was suggested “is quite a jump.”

The program is under the Community Development Block Grant program — one that’s been around for 60 years or so — and money granted to communities under this program has never had additional strings attached or been tied to uses such as those suggested during the public comments, he added.

Last month the county was in a position of explaining that the armory would not be used as an emergency shelter, dispelling rumors that had arisen after a homeless task force work session.

Commissioner Kirk Kirkpatrick told the group the Clyde armory couldn’t be used at present because of the lead and asbestos in it. The grant offered the ability to reuse repurpose building.

“It is not a facility to house people with COVID. That’s not the purpose of it,” he said.

Commissioner Brandon Rogers said that, as a member of both the commission and the county’s health and human services board, mandatory mask or vaccine mandates had never been discussed.

“I believe it should be a choice,” he said.

Commissioner Tommy Long praised the wisdom of previous commissioners in asking that should the National Guard no longer need the armory, it should be deeded to the county. He also said wearing a mask was a condition of his employment.

Ensley, in a personally revealing moment, told the crowd he really wished people would wear masks because his MS condition knocks out part of his immune system.

“I believe in the Ten Commandments and doing unto to others and you wish they would do unto you. I wish everyone would wear a mask to protect me. If they don’t, it makes me feel others don’t care about me or my elderly patients. My daughter takes care of COVID patients, so it’s important for me and her to wear a mask wherever we go. That’s three really good reasons why I wish people would wear masks.”

Ensley said he doesn’t want to see a mandatory mask mandate, but noted there are a lot of people around like him who don’t have healthy immune systems.

“So I would ask you if you would consider wearing one,” he said. “The CDC has said wearing a mask is as effective as a vaccine.”

When county leaders learned a group of citizens planned to attend Monday night's meeting but would likely object to the rule requiring all who entered the courthouse to wear a mask, a compromise was worked out.

The compromise worked out included asking those who wouldn't wear masks to sit as a group in a specific section of the room.

"This is a balance between me and we," Jaben said. "In their assessment on themselves vs. the community at large, they are favoring the me and maybe not acknowledging the full impact they are having on others."

Will Clyde armory finally be usable?

It’s been two years since Haywood County received the deed to the armory used by the National Guard’s 211th Military Police unit stationed in Clyde.

Who would spread a rumor that our neighbors and friends among law enforcement and medicine would actually have COVID-19 spreaders locked up? This is another insane conspiracy theory, part of Putin's plan to cause a breakdown of US government.