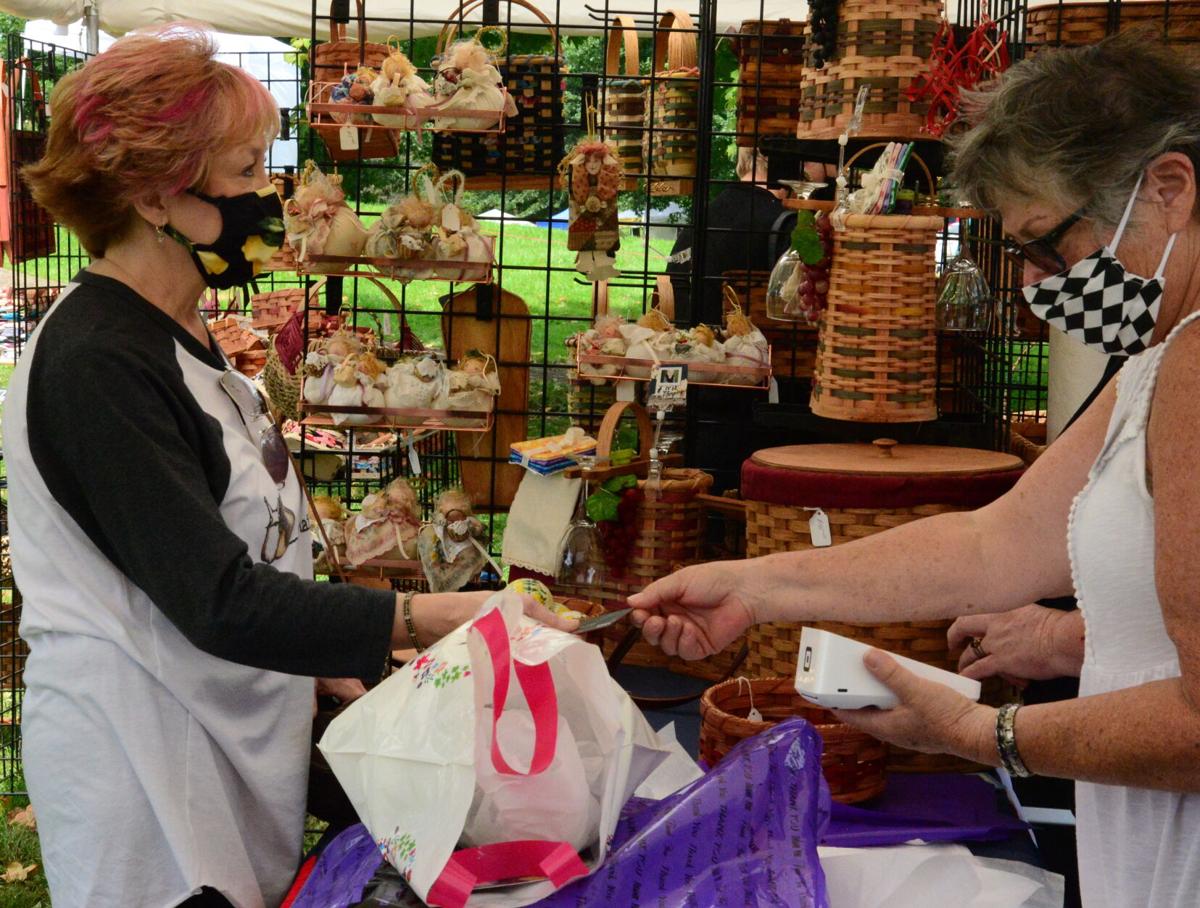 SUPPORTING THE ECONOMY — A shopper opens her wallet at the Blue Ridge Heritage Weekend held at the Shelton House in Waynesville this summer. While festivals are banned under the state’s COVID rules, outdoor shopping events aren’t. 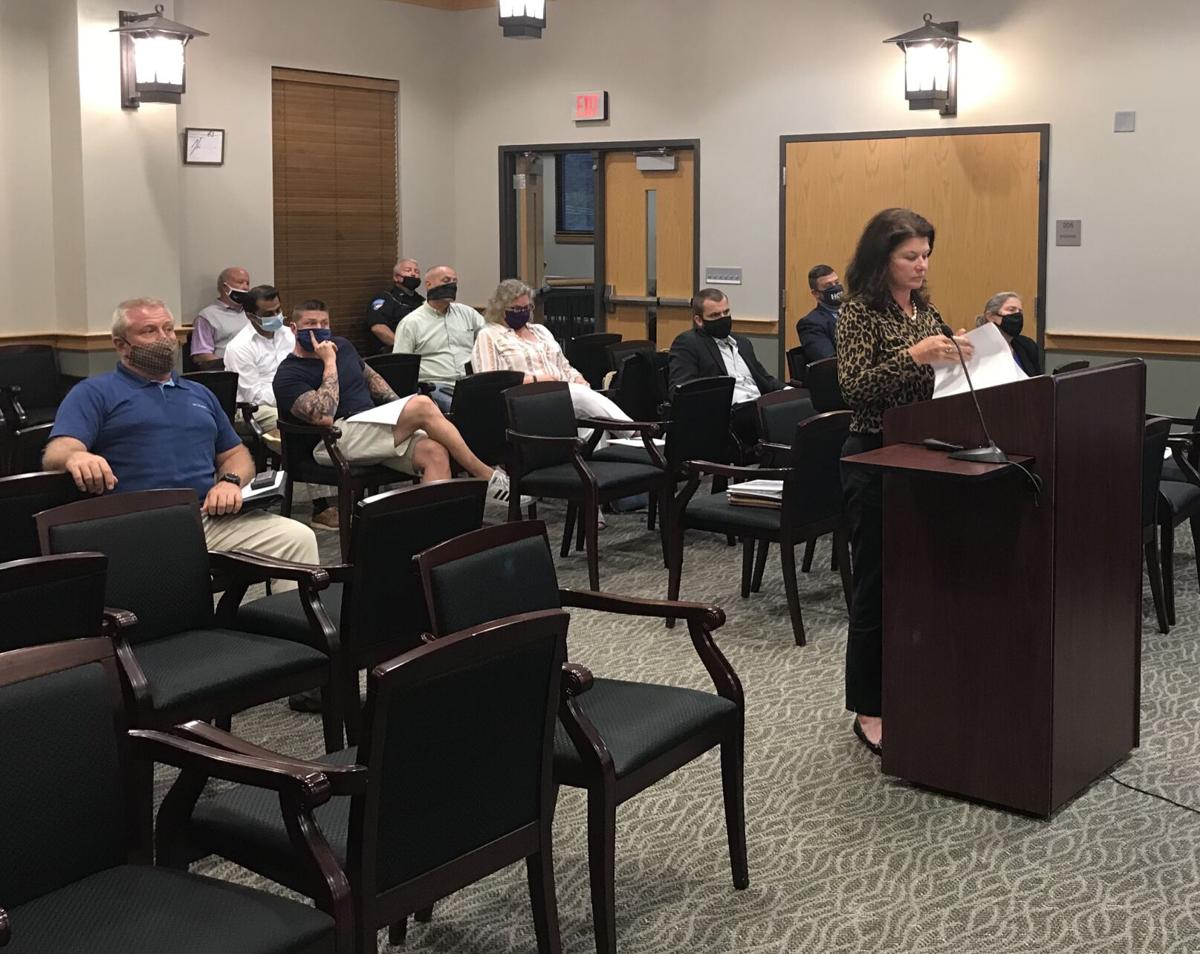 SEEKING APPROVAL — Haywood County Chamber of Commerce director CeCe Hipps, backed by several members of the chamber board in the audience, sought approval from the Waynesville town board for an Apple Harvest Daze event this fall.

SUPPORTING THE ECONOMY — A shopper opens her wallet at the Blue Ridge Heritage Weekend held at the Shelton House in Waynesville this summer. While festivals are banned under the state’s COVID rules, outdoor shopping events aren’t.

SEEKING APPROVAL — Haywood County Chamber of Commerce director CeCe Hipps, backed by several members of the chamber board in the audience, sought approval from the Waynesville town board for an Apple Harvest Daze event this fall.

A modified version of the Apple Harvest Festival is a go in downtown Waynesville this fall, following approval by the town board this week.

The signature fall festival hosted by the Haywood County Chamber of Commerce won’t look like that of past years. Instead, it will be modified as more of a shopping event — with fewer spread-out booths, one-way foot traffic, limited food, no beer garden and no bands.

“We are eliminating the things that would make it a festival,” explained CeCe Hipps, executive director of the chamber. “Basically what we are doing is a pop-up market.”

“We are simply trying to have a pop-up market to give our merchants and artisans an additional opportunity to survive during January, February and March,” Hipps said.

The event needed the blessing of the town board to go forward. Despite some reservations, the town board ultimately voted unanimously in favor of it on Tuesday night.

“I believe the chamber has brought forth a comprehensive, well thought out and safety-oriented plan,” Alderman Anthony Sutton said.

Aldermen Jon Feichter and Chuck Dickson had concerns about letting down the COVID guard too soon over people refusing to wear masks, especially among those coming in from surrounding states that aren’t used to wearing them.

Dickson wanted assurance that anyone without a mask would be denied entry or kicked out.

“What if someone coming in says ‘No I won’t wear a mask,’” Dickson said.

While Hipps said masks will be required, her hands would be tied if someone makes a scene and refuses.

“We can say we require masks. But if someone says they are allergic to masks or they have asthma or for religious beliefs, we have to accept that,” Hipps said. “There isn’t a lot you can do about it.”

“So you won’t deny them entry?” Dickson asked. “I’m not talking about the people who have problems. I see people every day who are perfectly capable of wearing masks but for some reason or another just refuse to wear one.”

“But you can’t ask them why,” Sutton said, citing legalities.

Under North Carolina’s mask mandate, someone claiming an exemption doesn’t have to provide any proof. Dickson suggested Waynesville pass its own mask ordinance as other towns have done, which would empower police to help with enforcement.

“I just want to protect the health and safety of the folks in Waynesville who work in the stores and also our town workers,” Dickson said.

Feichter suggested the mask mandate needs to be as close to mandatory as possible.

But the chamber volunteers will mostly have to rely on asking people to comply, along with copious signage.

“I encourage you to make the signs as big and as large as you can,” Dickson said. “I guess there is not much else you can do.”

In keeping with the scaled-down version and modifications to mitigate crowds, the chamber has rebranded the event planned for Oct. 17 as Apple Harvest Daze.

Meanwhile, a second fall festival historically held the previous weekend has been canceled. The Downtown Waynesville Association called off its Church Street Arts and Crafts Market.

Alderwoman Julia Freeman said she commended the chamber for going forward with its event.

“It’s needed in our community. We’ve got to start supporting our local businesses in a safe manner, and you guys have done that so we appreciate it,” Freeman said.

To festival or not to festival? Opinions mixed among downtown Waynesville players

Perhaps you would be so kind to list the date. I believe it is October 17. I would note that the researchers have stated that sunshine, which contains UV-C, kills the virus in about 3 seconds of exposure.

For the sake of the dollar, the CoC wants a Covid spreader. Having been a merchant of Main Street, I would not open my business for this event. Do you think mask will be worn by all - no - and what about Covid on hands that touch items on the street and in the stores. It does spread by touch. I am very disappointed the CoC and the town decided to do this. A big heart felt thank you to DWA for making the right decision to cancel this year.

When there is an up tick in Covid in Haywood Co., thank the CoC.