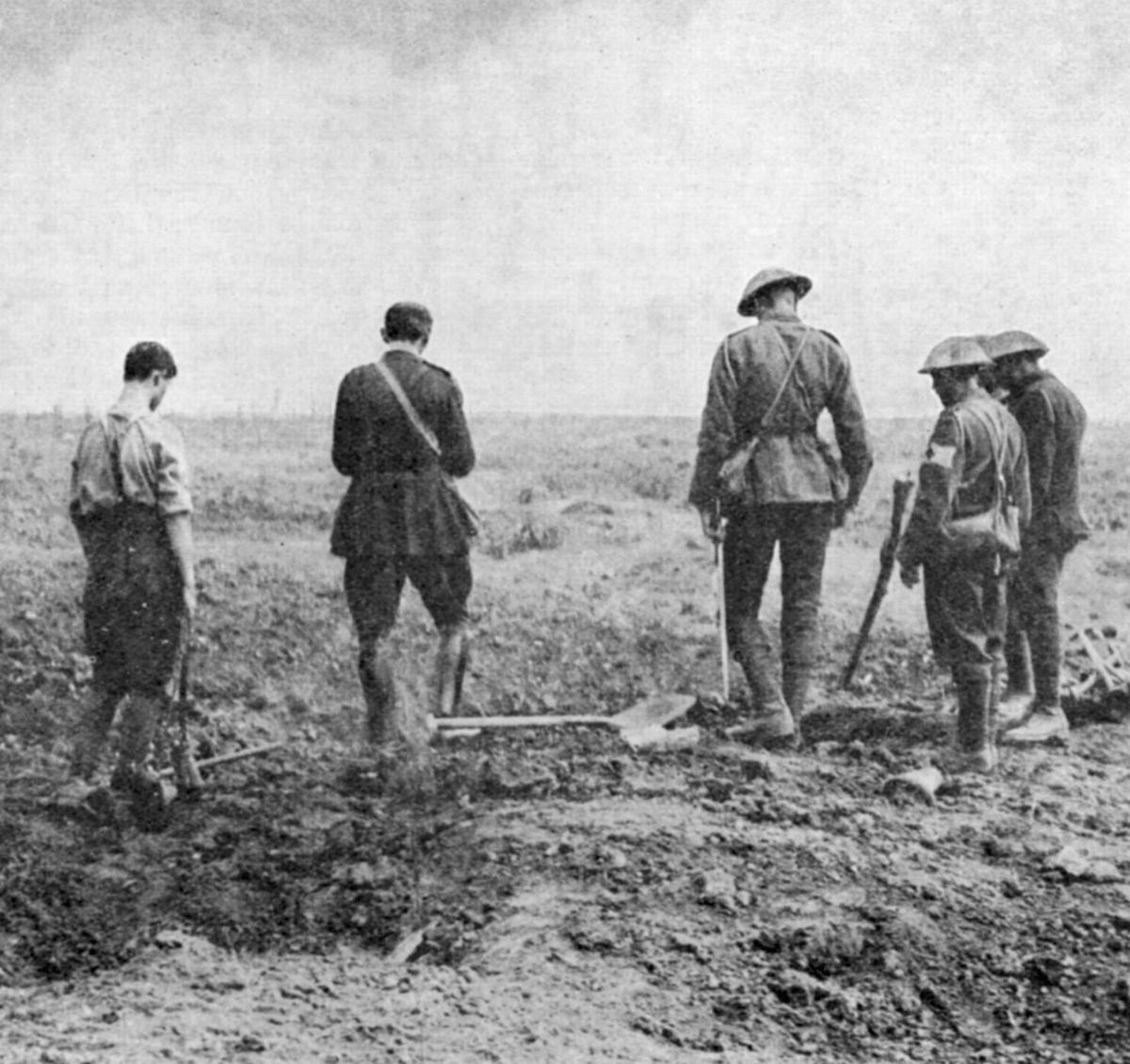 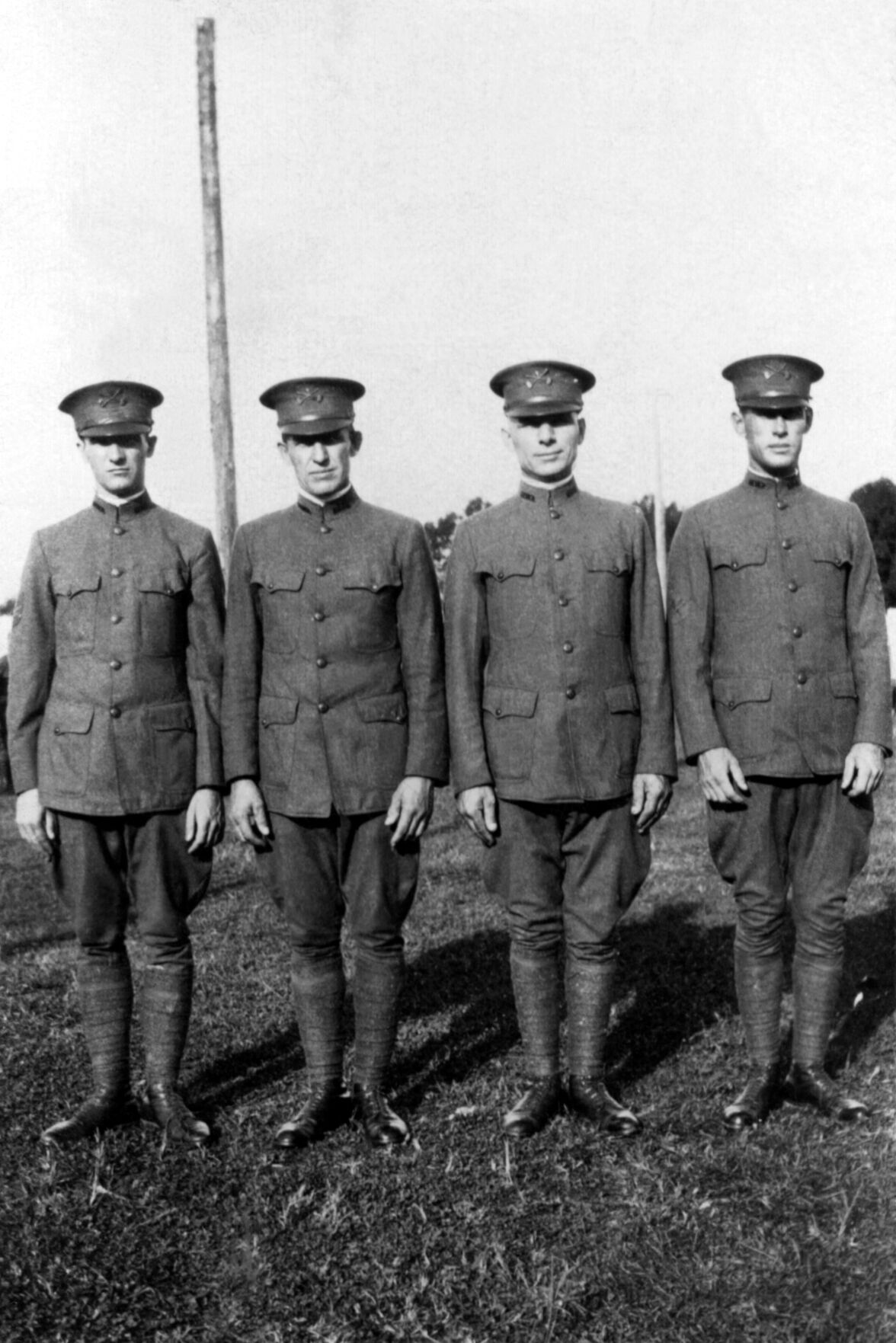 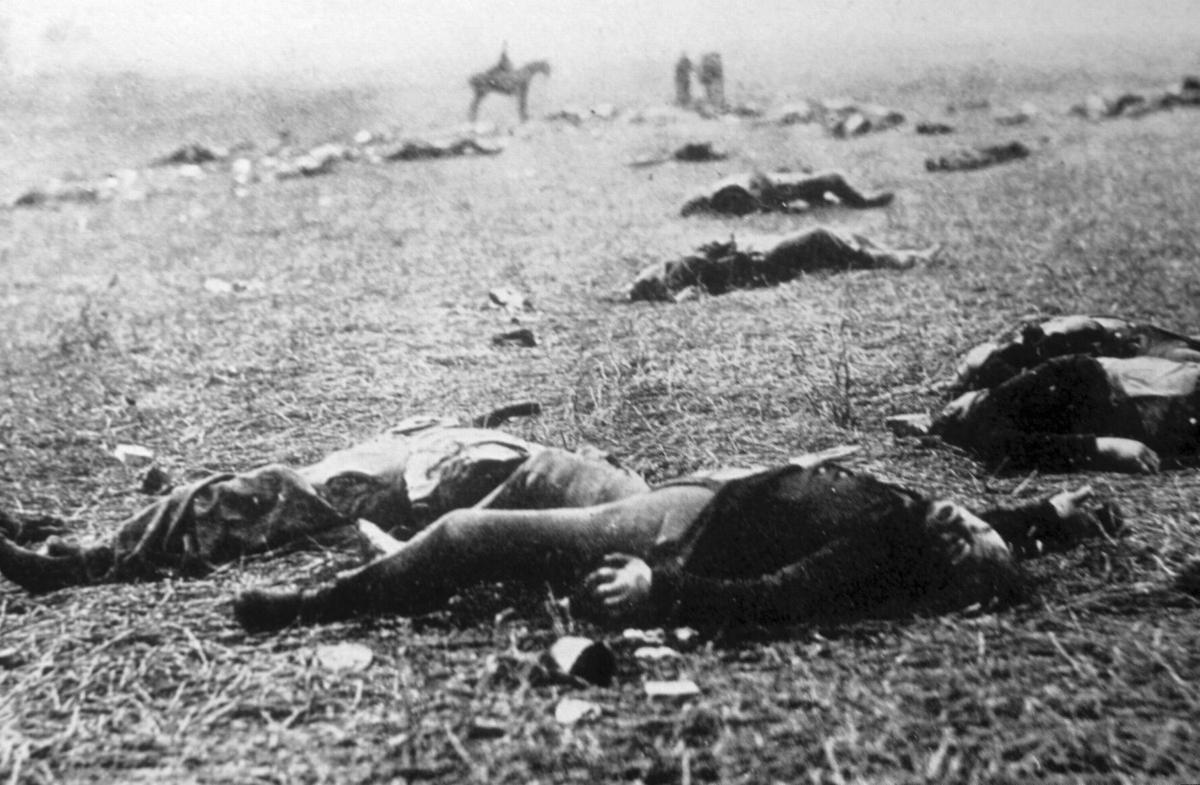 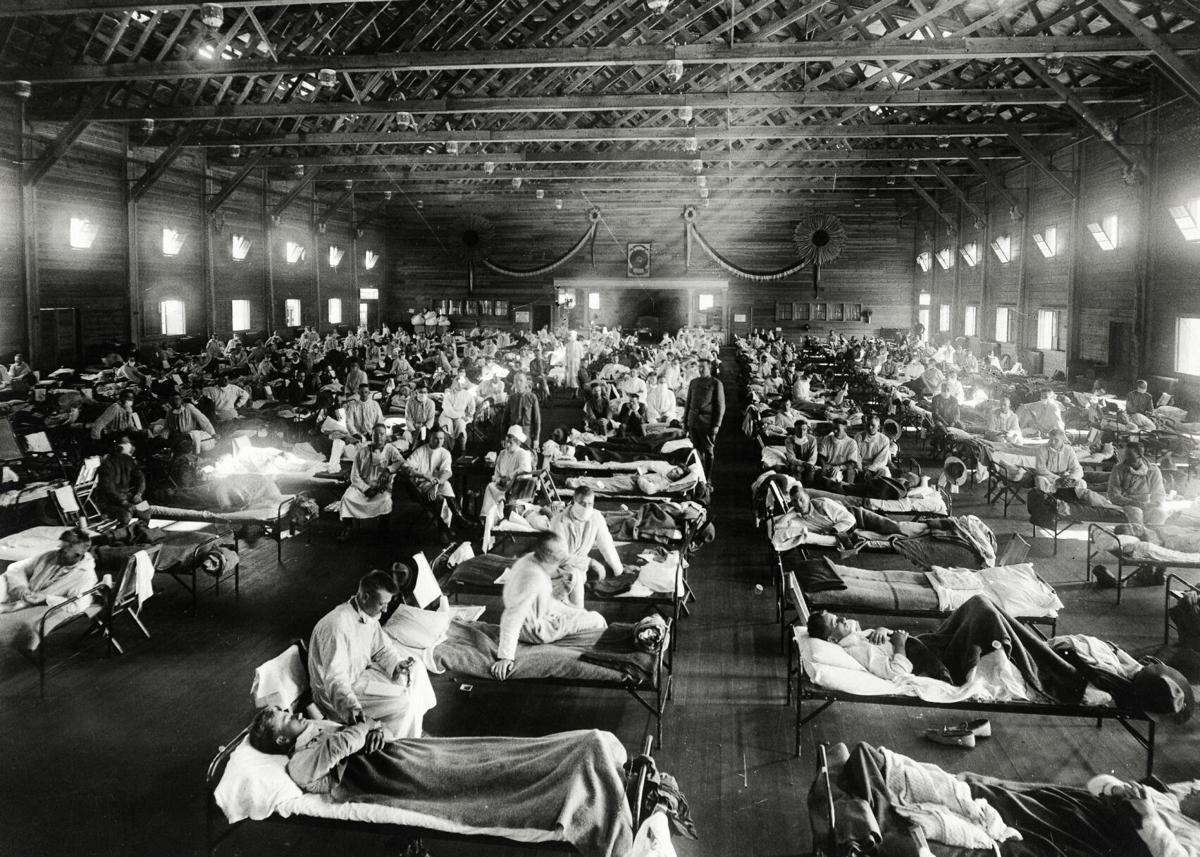 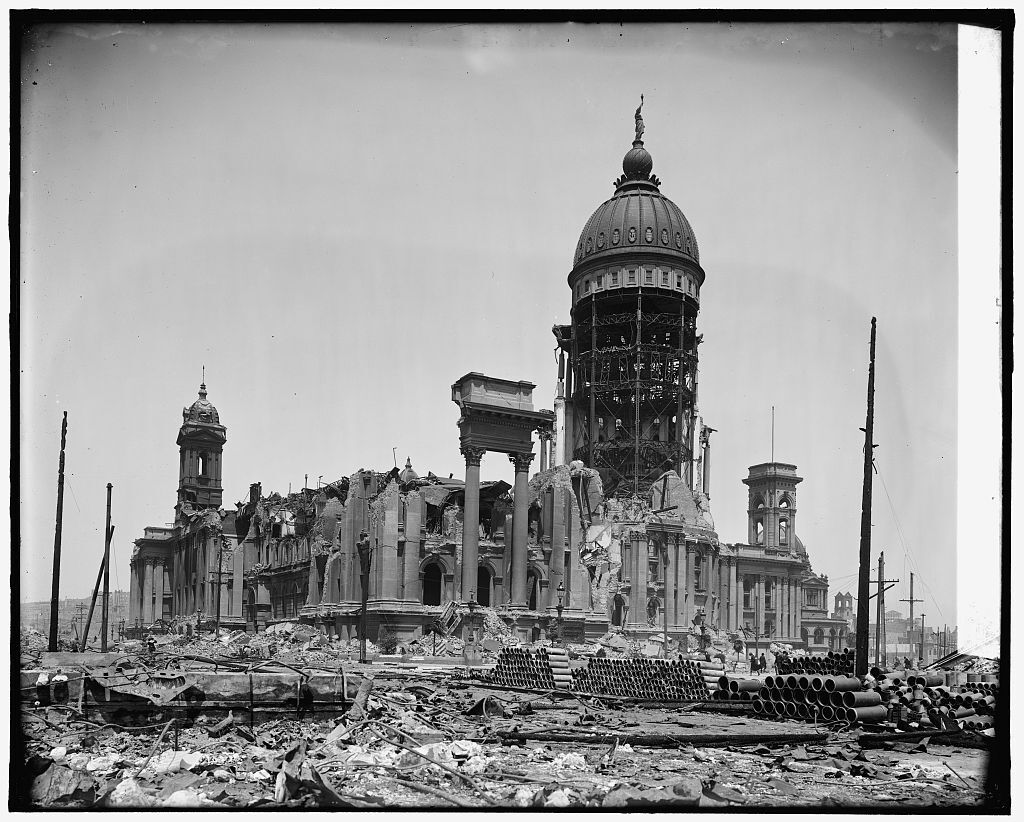 Ruins of City Hall after the 1906 earthquake in San Francisco, California. 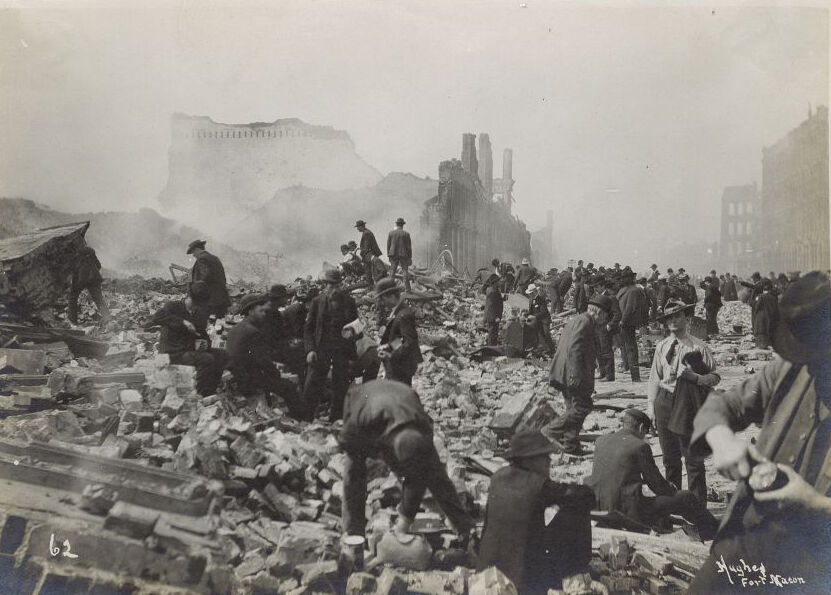 Photograph of Souvenir Hunters After the 1906 San Francisco Earthquake.

Photograph of Souvenir Hunters After the 1906 San Francisco Earthquake.

(Editor’s note: This is the second and final story in the series on famous U.S. disasters.)

Next up, deadly disasters continue at the hand of Mother Nature.

THE 1906 SAN FRANCISCO EARTHQUAKE AND FIRES

This earthquake ranks as one of the most significant of all time. San Francisco was once a western boom town of about 400,000 people. A lot of these folks, being very poor, lived in wood and brick tenements, and suffered great damage and loss of lives.

At 5:12 a.m., local time, on April 18, 1906, a foreshock was widely felt throughout the whole Bay Area. The earthquake itself broke loose about 25 seconds later, with an epicenter very near the city of San Francisco. Violent shaking lasted about 45 to 60 seconds and shocks were felt from southern Oregon to Los Angeles and as far inland as central Nevada. The strongest shaking occurred where ground was reclaimed from San Francisco Bay. This earthquake tore up 296 miles of the San Andreas fault.

Buildings were toppled across the city, including City Hall. However, deadlier even than the earthquake itself were the fires it caused. These fires tore through the over-populated tenements and burned for four days. Five hundred city blocks were leveled, approximately 3,000 people died and more than 200,000 people were left homeless.

As there was not then the scientific knowledge of today, geologists were completely confounded by the tremendous rupture length. It took half a century, with the huge improvement of plate tectonic knowledge, before the earthquake displacement could be fully appreciated.

For those who want to delve deeply into earthquakes, W.L. Ellsworth, in 1990, wrote most interestingly about earthquake history and the San Andreas Fault.

Back to war. It simply cannot be avoided and our very own Civil War in large part determined the future of America.

Recently, however, it was estimated that Confederate deaths were undercounted and today the final number is deemed to be closer to 750,000. If this is true, it represents 2.5% of the toal U.S. Population in the 1860s. The suffering inflicted by our Civil War is considered to be unequaled in military history.

Even worse than the death toll was the psychological and moral turpitude of a nation barely out of its infancy, as nations’ ages are determined. Fathers fought against sons; brothers fought against brothers; whole families were split and separated, both physically and emotionally.

And what led to the bloodiest conflict in America? A common explanation is that it was fought over the moral issue of slavery. More central to the war was the economics of slavery and political control.

Some of the real causes of the Civil War were economic and social differences between the North and South; states vs. federal rights; the fight between slave and non-slave proponents; and the election of Abraham Lincoln to the presidency.

In a famous quote, President Lincoln said, “My paramount object in this struggle is to save the Union, and is not either to save or to destroy slavery. If I could save the Union without freeing any slave, I would do it, and if I could save it by freeing all the slaves, I would do it ... I shall do less whenever I shall believe what I am doing hurts the cause, and I shall do more whenever I shall believe doing more will help the cause.”

The Civil War began in 1861 after decades of simmering tensions between northern and southern states over states’ rights, slavery and westward expansion. It ended in the surrender, in 1865, of the Confederate States.

Confederate General Robert E. Lee confided, “I shall mourn for my country and for the welfare and progress of mankind.”

Further, Lee expounded what still is true for all of us today: “What a cruel thing is war; to separate and destroy families and friends, and mar the purest joys and happiness God has granted us in this world; to fill our hearts with hatred instead of love for our neighbors, and to devastate the fair face of this beautiful world.”

Pages and pages more could be written about one of the worst conflicts in history, but space will not allow. So, here, in brief, are a few surprising Civil War facts you may not know.

Note that battles and dates of battles have not been discussed. This is because there will not be a quiz. And, besides, it would take too much space.

Although one may be tired of hearing of war, there is still a very important one that cannot be overlooked.

World War I was known as the Great War and began in 1914. The spark that ignited this evil conflict was struck in Sarajevo, Bosnia, where the heir to the Austro-Hungarian Empire was visiting. Archduke Franz Ferdinand was shot to death, along with his wife, Sophie, by a man named Gavrilo Princip, an obsessed nationalist who wanted to end the Austro-Hungarian rule over Bosnia and Herzegovina.

Europe slid into war over this event, but U.S. President Woodrow Wilson kept America neutral for a while. This neutrality ended when the passenger ship Lusitania was torpedoed by the Germans in 1915, killing 120 Americans.

That did it, and America declared war on Germany and deployed hundreds of thousands of young men to face German bullets, bayonets, tanks, poison gas and disease.

Two of the best-known battles of this war were the Battle of the Marne, in northeastern France in 1914, and the Battle of the Somme in 1916, fought at Verdun. Both of these were very long and costly battles in which too many lives were lost.

The American toll on life was 116,516. Heaven knows how many Europeans. The “war to end all wars” concluded on Nov. 11, 1918, with an Armistice declaring Allied victory. Harry Frieman, an American serviceman, recorded in a journal he kept: “If the war had kept up a few hours longer, there wouldn’t be many of us left to tell about it.”

The stunning figure of 675,000 Americans and from 50 to 100 million victims worldwide died during this pandemic. It was deadlier than World War I. This was truly the mother of all pandemics.

Called the “Spanish Flu,” it did not originate in Spain. It got that name because World War I was raging and censors, trying to maintain American morale, minimized reports of the illness, while the Spanish press reported it in full, since King Alfonso of Spain was gravely ill.

The first confirmed case in America of this very virulent disease was a U.S. Army cook stationed in Kansas in 1918. Unlike seasonal flu, which is more dangerous to the very young and the very old, the 1918 strain cut down people, otherwise healthy, in the very prime of life.

As with our current COVID, all social gatherings, theaters, events, etc. were shut down, hoping to stem the spread of the virus. And face masks were mandatory. There was no vaccine.

Jeffrey Taubenberger, an American virologist, along with Ann Reid, was the first to sequence the genome of the Spanish Flu. According to Taubenberger, when humans became infected with the 1918 pandemic flu, which was originally a bird flu, they also passed it on to pigs.

“One branch of the 1918 flu permanently adapted to pigs and became swine influenza that was seen in pigs in the U.S. every year after 1918 and spread around the world,” said the virologist.

This influenza strain was an unusually deadly virus. It lasted from February 1918 to April 1920, infecting about a third of the world population and coming in four waves.

Other epidemics, such as AIDS and, of course, our current coronavirus storm the world from time to time. But, as most people have heard enough of them, we will skip them, and, as the Beatles said, “Let it be.”

(JoAnna Swanson is a regular contributor to The Mountaineer. She lives in Waynesville. Sources: Henry Simmons, “The Encyclopedia of Civil War;” “Encyclopedia of the First World War” by Jeffrey Taubenberger, National Institute of Health; Dr. Ann Reid, Armed Forces Institute of Pathology; History.com.)