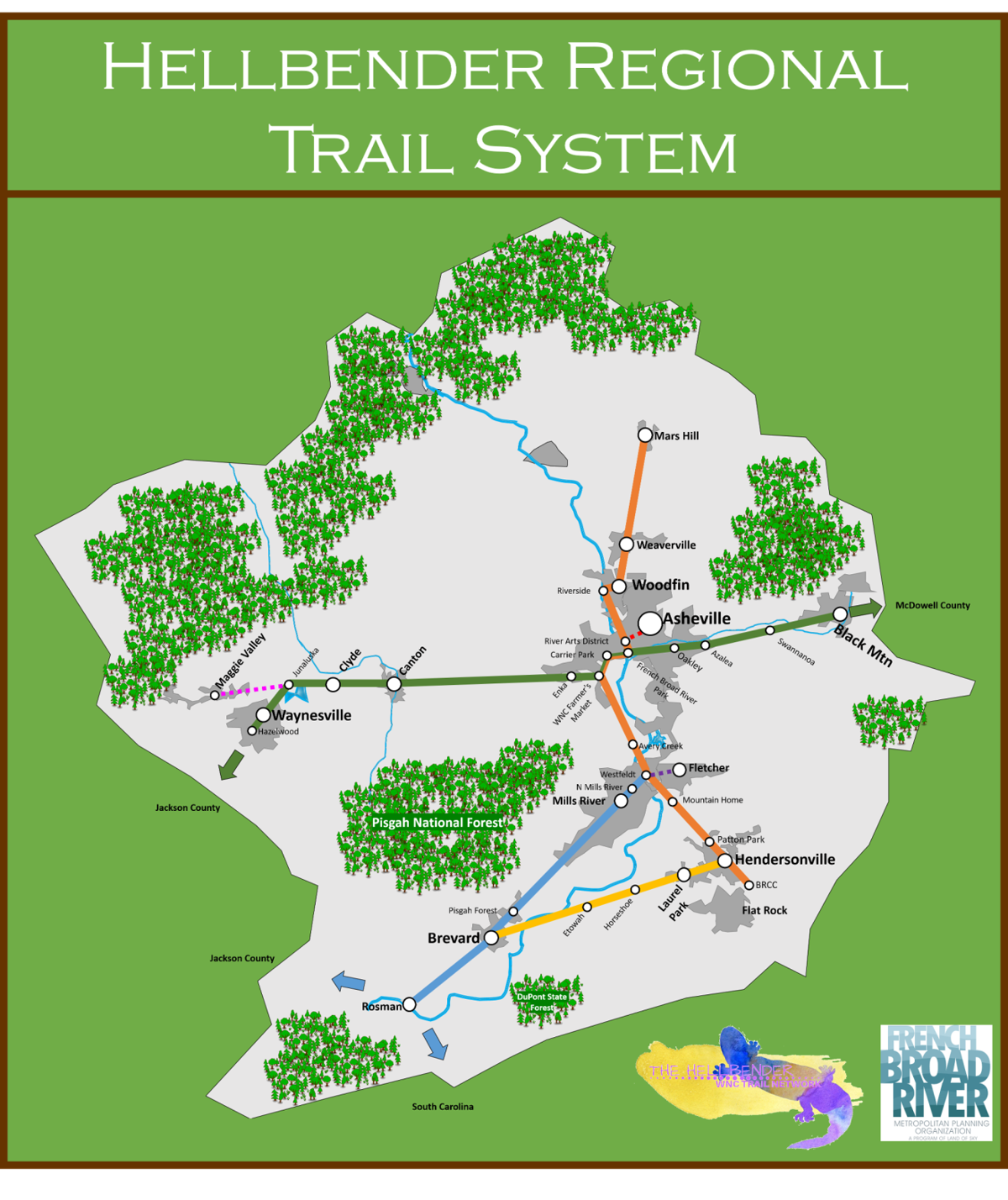 HELLBENDER TRAIL — Plans for a 150-mile Hellbender Regional Trail have been described as a stitching exercise piecing together already-existing concepts for bike and pedestrian infrastructure in Haywood, Buncombe, Henderson, Transylvania and Madison counties. 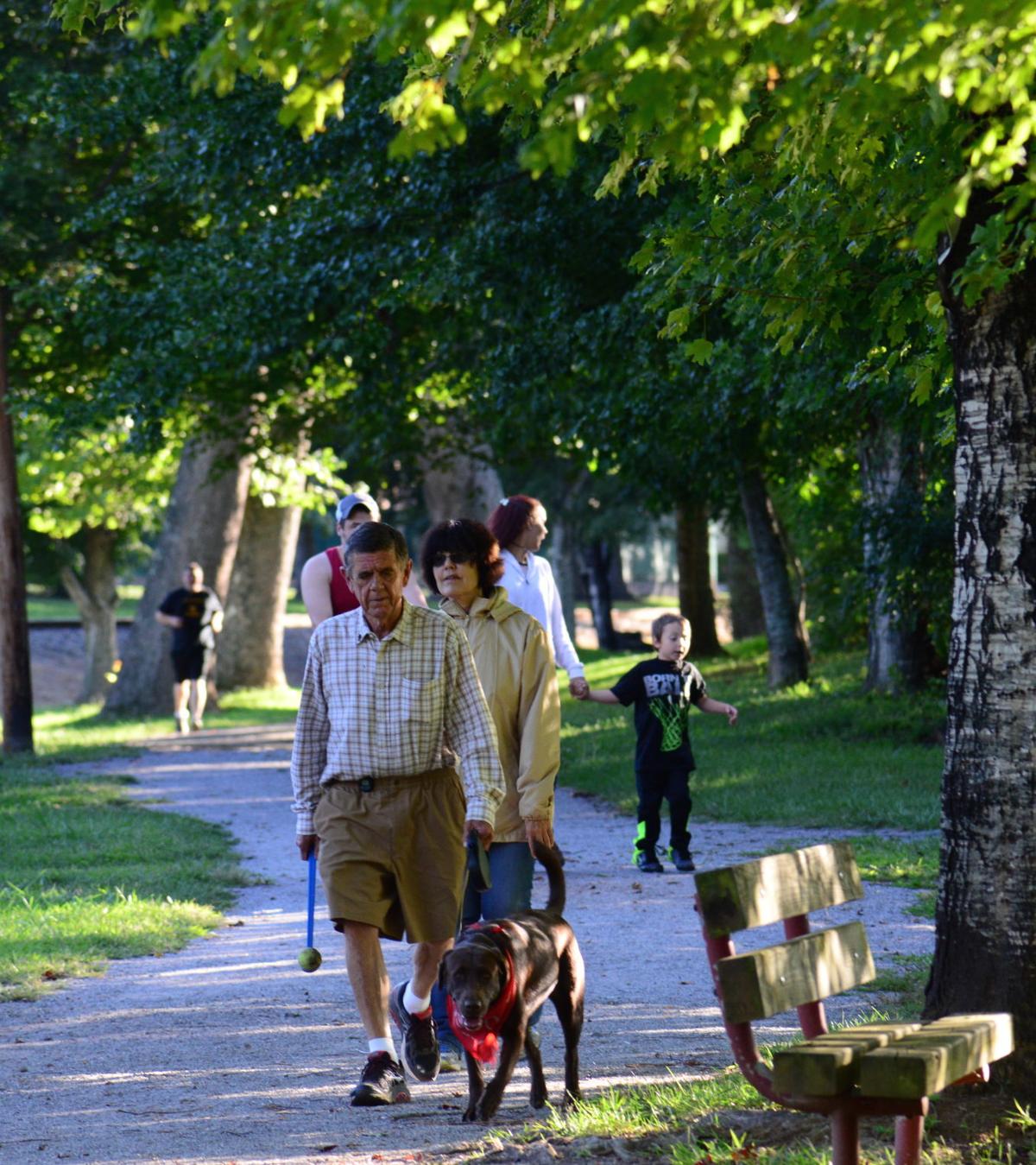 HELLBENDER TRAIL — Plans for a 150-mile Hellbender Regional Trail have been described as a stitching exercise piecing together already-existing concepts for bike and pedestrian infrastructure in Haywood, Buncombe, Henderson, Transylvania and Madison counties.

While it may take half a century to implement, regional planners have devised a framework for connecting bike and pedestrian trails from Haywood to surrounding Western North Carolina counties.

The sweeping vision behind the Hellbender Regional Trail would stitch together a 150-mile network of bike and pedestrian paths in Haywood, Buncombe, Henderson, Transylvania and Madison counties.

Once and if the biker-pedestrian highway is completed one would be able to walk, run or pedal from the greenway at Waynesville Rec Park, through Canton and to Asheville, then onward to Black Mountain, Mars Hill, Hendersonville or Brevard — without ever touching a vehicular roadway.

“To me there’s a fair amount of momentum popping up around Haywood County,” said Tristan Winkler, director of the Land of Sky Regional Council’s French Broad River Metropolitan Planning Organization. “We do see a very strong economic connection between Haywood and the rest of the region.”

The initiative has been in its planning phase for about 18 months.

“For us, putting together something that reflects transportation as an overall regional issue is something that’s important in the bicycle and pedestrian realm,” Winkler said. “People are traveling more and more between counties, between different jurisdictions — be that for work, recreation or entertainment.”

The plan centers around filling in missing links to complement what’s already there or already in the pipeline.

However, most of the route is still just lines on a map.

To date, 12 miles of the proposed 150-mile Hellbender Regional Trail have already been paved and another 26 miles are in the planning or design phase.

“We really don’t have a ton of bike/ped infrastructure in this region right now,” Winkler said. “At the same time I think we’re seeing a lot of momentum picking up for implementation. Our region has taken quite an interest in bicycle and pedestrian infrastructure and planning in the last decade or two.”

The other more than 100 miles are either being studied or are in some other stage of early conceptualization, Winkler said. Only 17 miles of the proposed trail system are not already included in some form or fashion in local bike or pedestrian trail plans.

“A vast majority of jurisdictions in our region have completed a bicycle or pedestrian plan,” Winkler said. “89 percent of this plan is straight from local bike and pedestrian agreements.”

Local governments will be largely responsible for implementing their individually formed bike-pedestrian plans, and the larger Hellbender Trail will serve as a supplement to those smaller sections of trail, Winkler said.

“The Hellbender Regional Trail Plan, it’s a long-term vision,” Winkler said. “From our back-of-the-napkin calculations, if we really focused the current funding we could towards this system, 50 years for implementing all 150 miles is a fairly optimistic time frame to look at.”

Winkler said many people might say 50 years is too long, but it’s important to have a long-term vision for a project spanning multiple counties.

“Creating a long-term vision for bicycle and pedestrian infrastructure is something that can help us focus some of those limited resources and pitch a bigger vision,” Winkler said. “If this is something our communities really want, it does start to pose the question of ‘how do we use our resources to help implement something like this, maybe in a timeframe faster than 50 years?’”

“This is a regional infrastructure we just don’t have at the moment,” Winkler said. “We’re hoping to build something that’s more than the sum of its parts.”

Public comment on the proposed Hellbender Regional Trail plan is being accepted through Aug. 21. For more information or submit input, go to frenchbroadrivermpo.org/multimodal/.