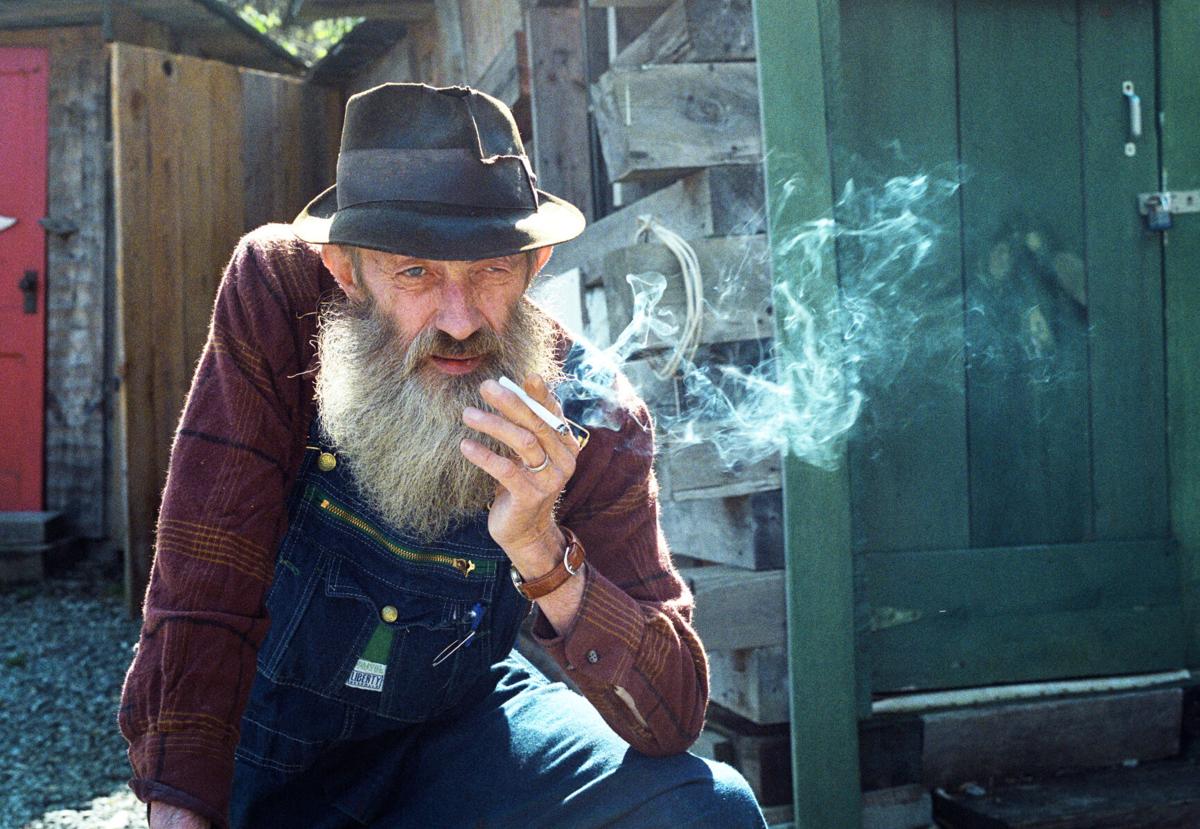 THE MOONSHINER — On April 2, Neal Hutcheson releases his new book, ‘The Moonshiner Popcorn Sutton,’ a biography and collection of photographs and interviews detailing the life and legacy of Marvin “Popcorn” Sutton. 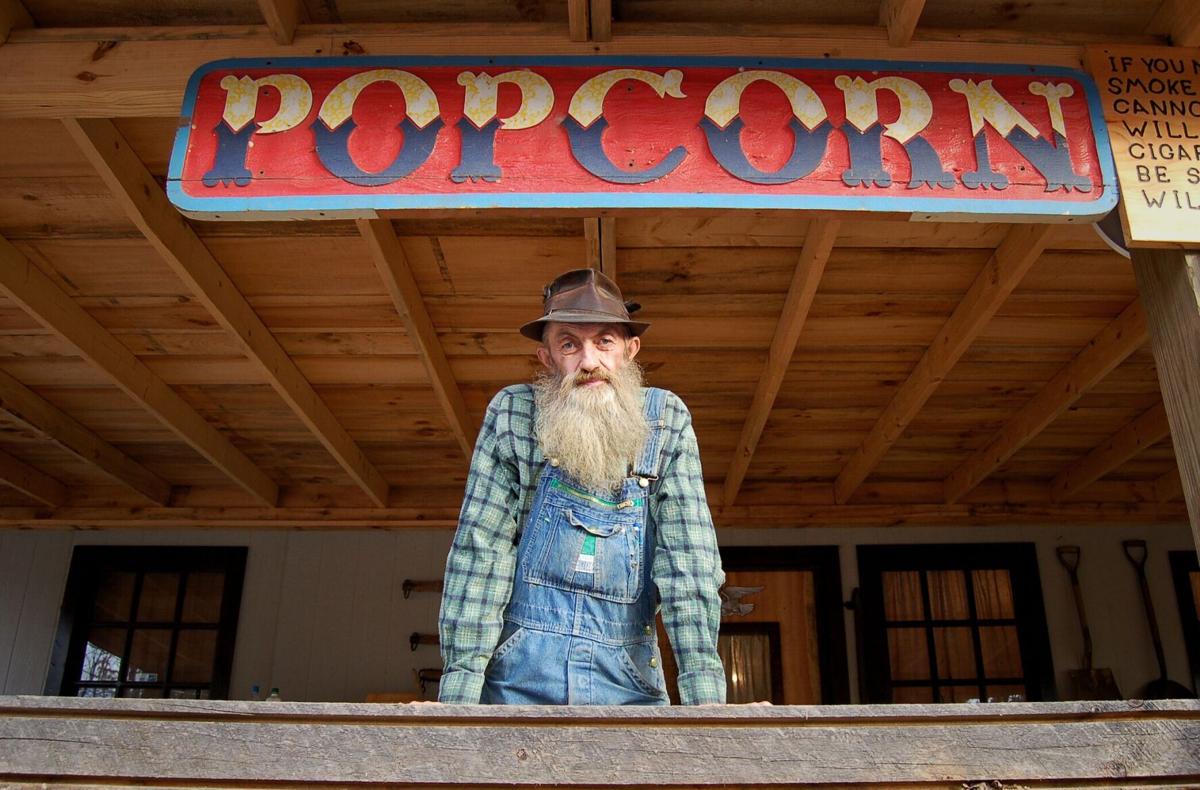 LEGACY — Popcorn Sutton was a moonshiner from Haywood County who remains a figure of public intrigue 12 years after his death. 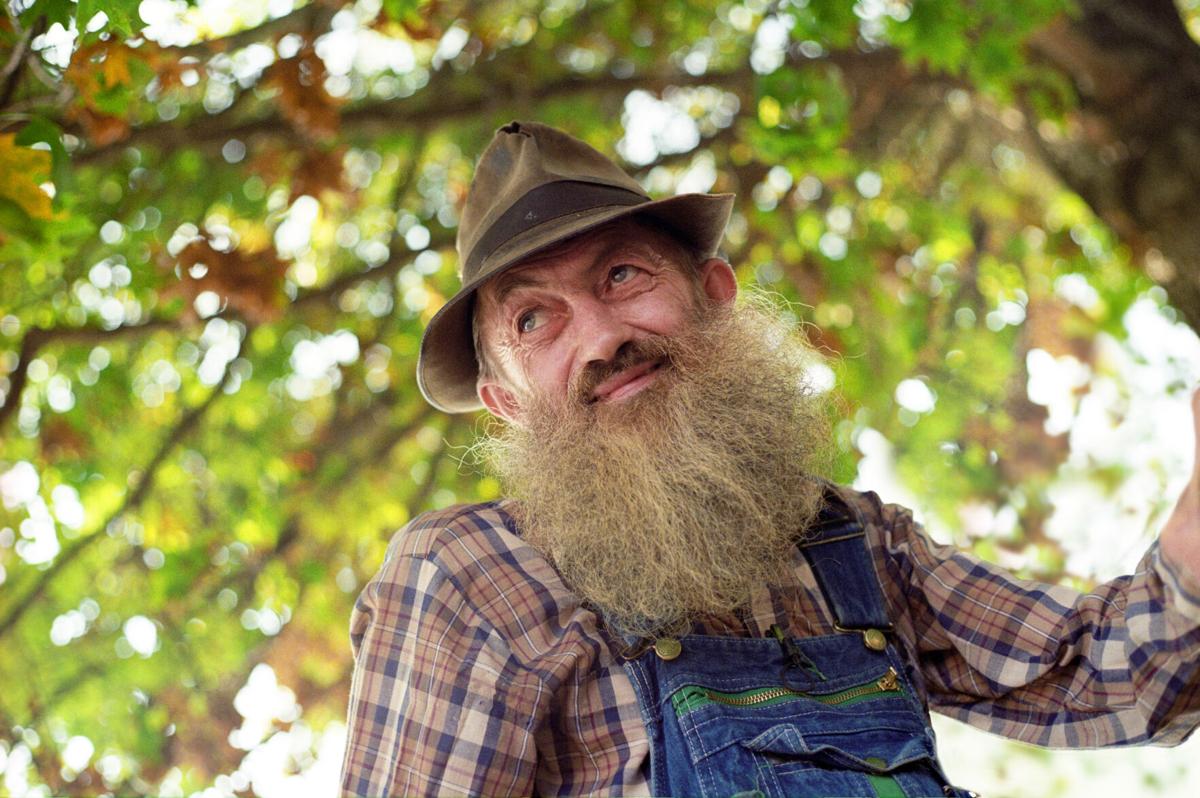 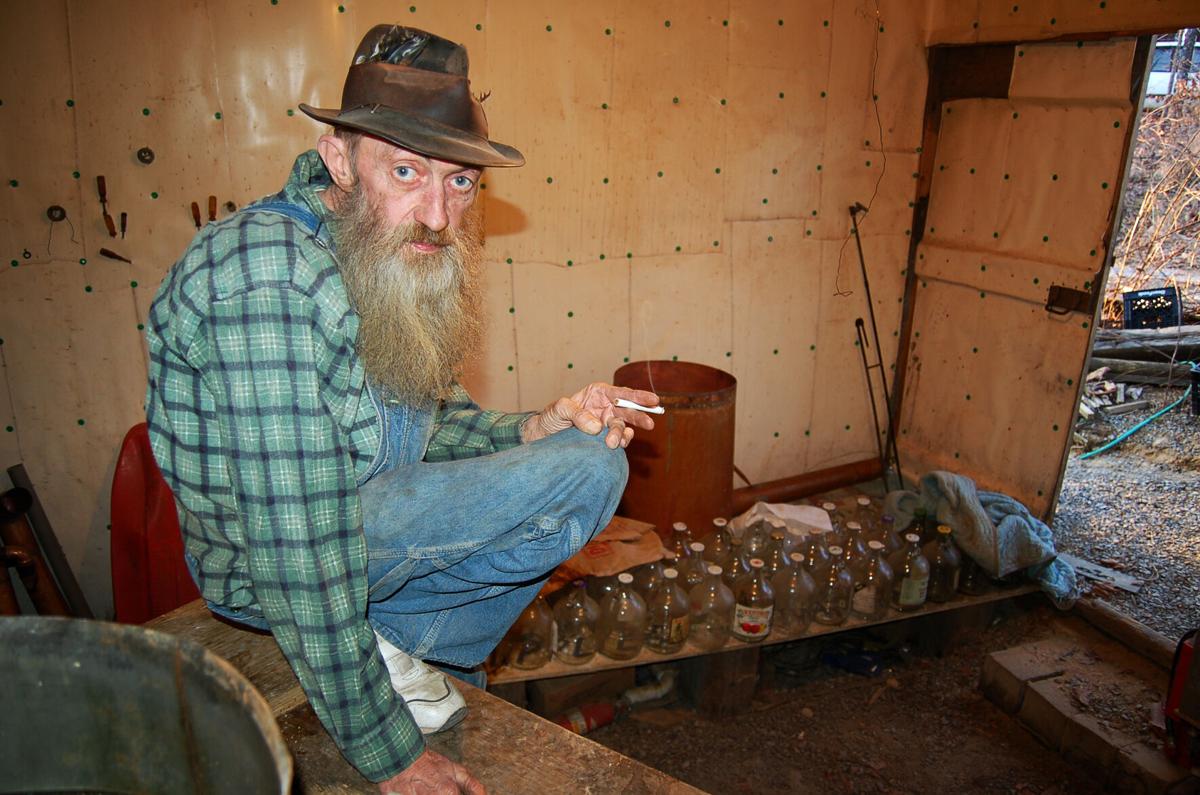 STILL — The late moonshiner Popcorn Sutton inside one of his sheds. 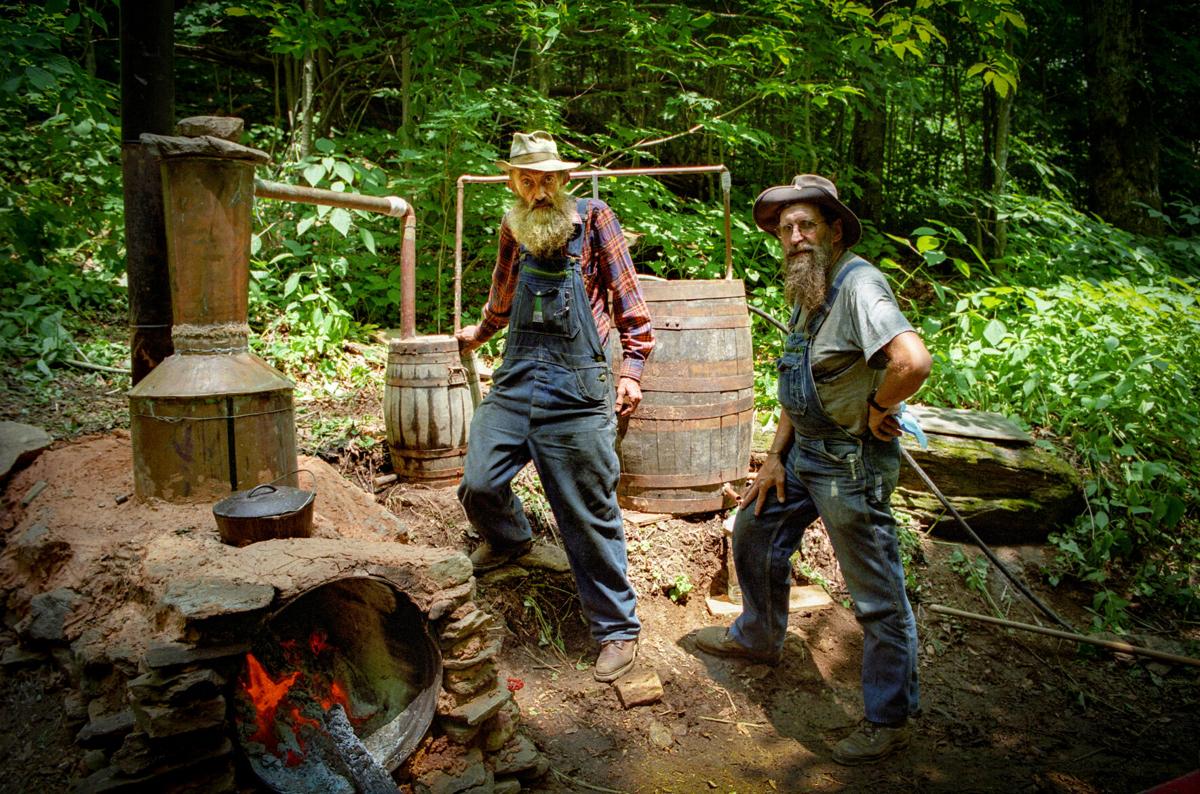 J.B. Rader and Popcorn Sutton are pictured in the documentary film “The Last One,” created by Neal Hutcheson in 2008. 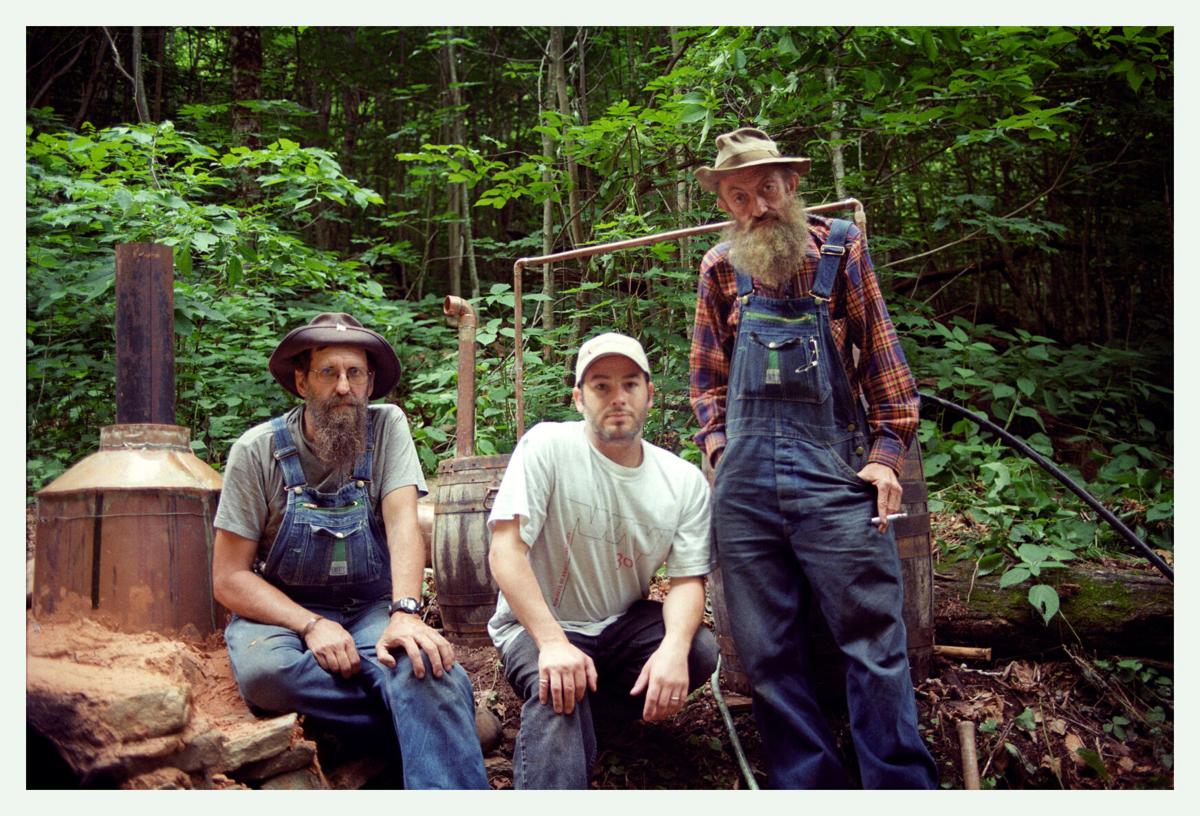 THE MOONSHINER — On April 2, Neal Hutcheson releases his new book, ‘The Moonshiner Popcorn Sutton,’ a biography and collection of photographs and interviews detailing the life and legacy of Marvin “Popcorn” Sutton.

LEGACY — Popcorn Sutton was a moonshiner from Haywood County who remains a figure of public intrigue 12 years after his death.

At the end of his life, Marvin “Popcorn” Sutton was revered as a folk hero, a rebel and is still referred to as the “king of moonshine.”

And even though it has been 12 years since his death, Popcorn Sutton remains a figure of public intrigue.

But there was a lot more to Sutton than just moonshine — at least that’s what author and filmmaker Neal Hutcheson explains in his new book, “The Moonshiner Popcorn Sutton.”

Hutcheson, who worked with Sutton in creating several major documentaries about his life, describes Popcorn as not only a complex character, but a truly gifted and fascinating craftsman.

“He was also an incredible performer and was really savvy about people and what they wanted and being able to deliver it to them,” Hutcheson said. “It was a lot of fun being around him. More and more I would visit with him, just enjoying the opportunity to be around him. After he began to trust me more and more, he allowed me to visit his home in East Tennessee and see his big moonshine operation. I remember thinking, ‘Wow this is something most people don’t ever get to see.’”

And after getting to know Sutton over the years, Hutcheson said he felt compelled to write the book as a final tribute to him before he moved on from the subject.

“I want readers to have a deeper appreciation for who he was,” Hutcheson said. “I feel like the book shows him in both good and bad lights. Yes, there were some character flaws mentioned in there, but I got to experience his most generous qualities.”

“The Moonshiner Popcorn Sutton” captures the true story of the man behind the legend for the first time in extensive personal interviews, exclusive behind-the-scenes photography, first-hand remembrances, and vital historical context.

“It’s not just me talking — a large chunk of the book is devoted to interviews with Popcorn,” Hutcheson said. “I really gave it over to him. A lot of it stayed in his voice. It’s also got a lot of my photography I did with him over the years.”

Hutcheson’s book offers readers a glimpse into Popcorn’s wit, jokes and indelible way of speaking, which offers a better understanding of how the people of the region survived.

The book, which will be released on April 2, features contributions from Southern Appalachian novelist David Joy and Penn State anthropologist Kirk French.

Due to COVID, book events are being tentatively scheduled for late spring and summer.

The book can be purchased online at www.suckerpunchpictures.com or locally at Blue Ridge Books in Waynesville.

Raised in the Hemphill community of Maggie Valley, Sutton learned to make moonshine at an early age, like his father and grandfather before him, and continued to pursue the perfection of the craft throughout his life.

As Sutton became a well-known figure after appearing in documentaries, television shows, and heritage events, he brought the tradition of moonshining into the light and continued to make and distribute outlawed liquor in increasing quantities throughout his life.

Popcorn’s ancestors settled in Cataloochee in the Great Smoky Mountains. By hunting, farming, foraging and distilling whiskey, the Suttons relied on traditional knowledge and skills to survive.

When Popcorn was born in 1946, Appalachia had not been developed with hard-surface roads, cars, rural electrification, radio or television.

Survival during that time period required knowing the mountains. By mixing the pure, cold, abundantly flowing mountain water with liquid from rotten corn, and distilling it through whatever pieces of metal he found, Popcorn learned to operate “in a gray area between social approval and legal consequences,” Hutcheson writes in his book.

That was how Popcorn began his legacy of being a moonshiner and a bootlegger, which later became an empire. Throughout his life, Sutton proudly held on to his Scotch-Irish American heritage and boasted about the fact that he had moonshining in his blood.

In Hutcheson’s book, Sutton was quoted saying, “I’ve dug ditches. I’ve worked on construction. I’ve done everything. And there ain’t nothin’ no harder than what I’m a-doin’, but it’s just in my blood.”

Sutton earned massive fame as a liquor king by the time he turned 60. In 1999, he launched his self-published autobiography, “Me and My Likker,” which also chronicled the incredible journey of moonshine production. He published the book at his junk shop in Maggie Valley.

In January 2009, Sutton was charged with illegal distillation of spirits and firearm possession. He pleaded guilty and was sentenced to 18 months of federal imprisonment.

Just two months later, Sutton committed suicide. It was said he did this to avoid the federal prison term that was supposed to start a few days later. Additionally, Sutton had had a mental breakdown after being diagnosed with cancer.

Just a year after Sutton died, moonshining was legalized in the U.S.

Neal Hutcheson is an award-winning filmmaker with a large body of work documenting heritage in transition. Hutcheson’s documentary “Mountain Talk” (2002) featured Popcorn Sutton, among many other citizens of Western North Carolina, and he subsequently produced two documentary features with Sutton, the Emmy Award-winning “The Last One” (2009) and “Popcorn Sutton – A Hell of a Life” (2014).

He currently resides in Raleigh, and works at N.C. State University as a senior research scholar in the Humanities and Social Sciences Department.

To learn more, or to see more of Hutcheson’s work, visit https://suckerpunchpictures.com/.

The nickname "Popcorn" was given to him in the 1960s or the 1970s, after Sutton attacked a broken popcorn vending machine with a pool cue.