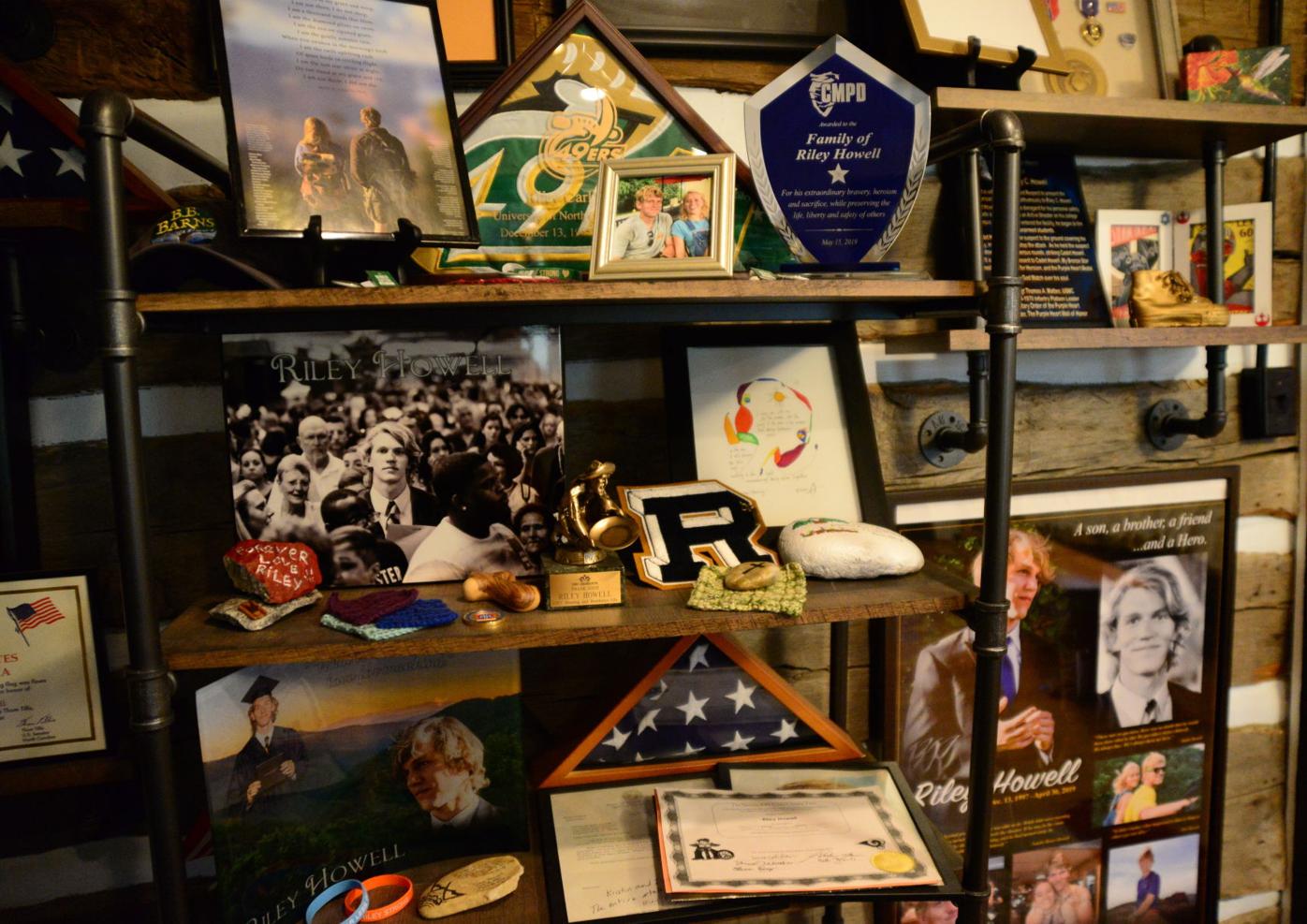 PAYING TRIBUTE — The Riley Howell Mighty Four Miler, now rescheduled for October, will benefit the foundation founded in his name. A collection of memorials and tributes sent by people from across the country who were moved by Riley’s heroism are on display in the family’s home. 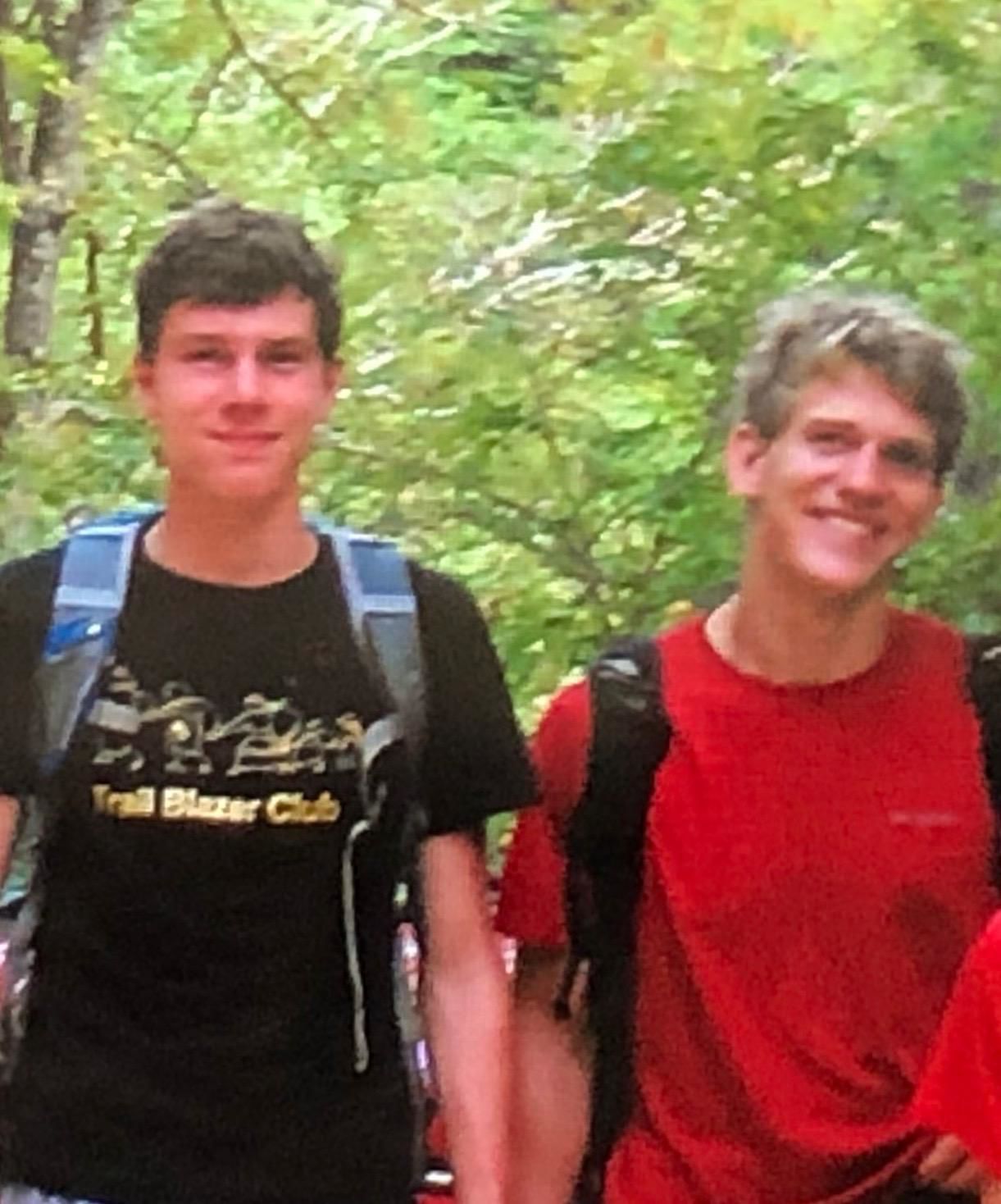 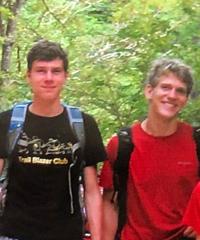 ON THE GO — Riley Howell, right, pictured with his lifelong friend Logan King, on a hike. Howell loved being active and ran track — which makes the Mighty Four-Miler race a particularly fitting tribute. 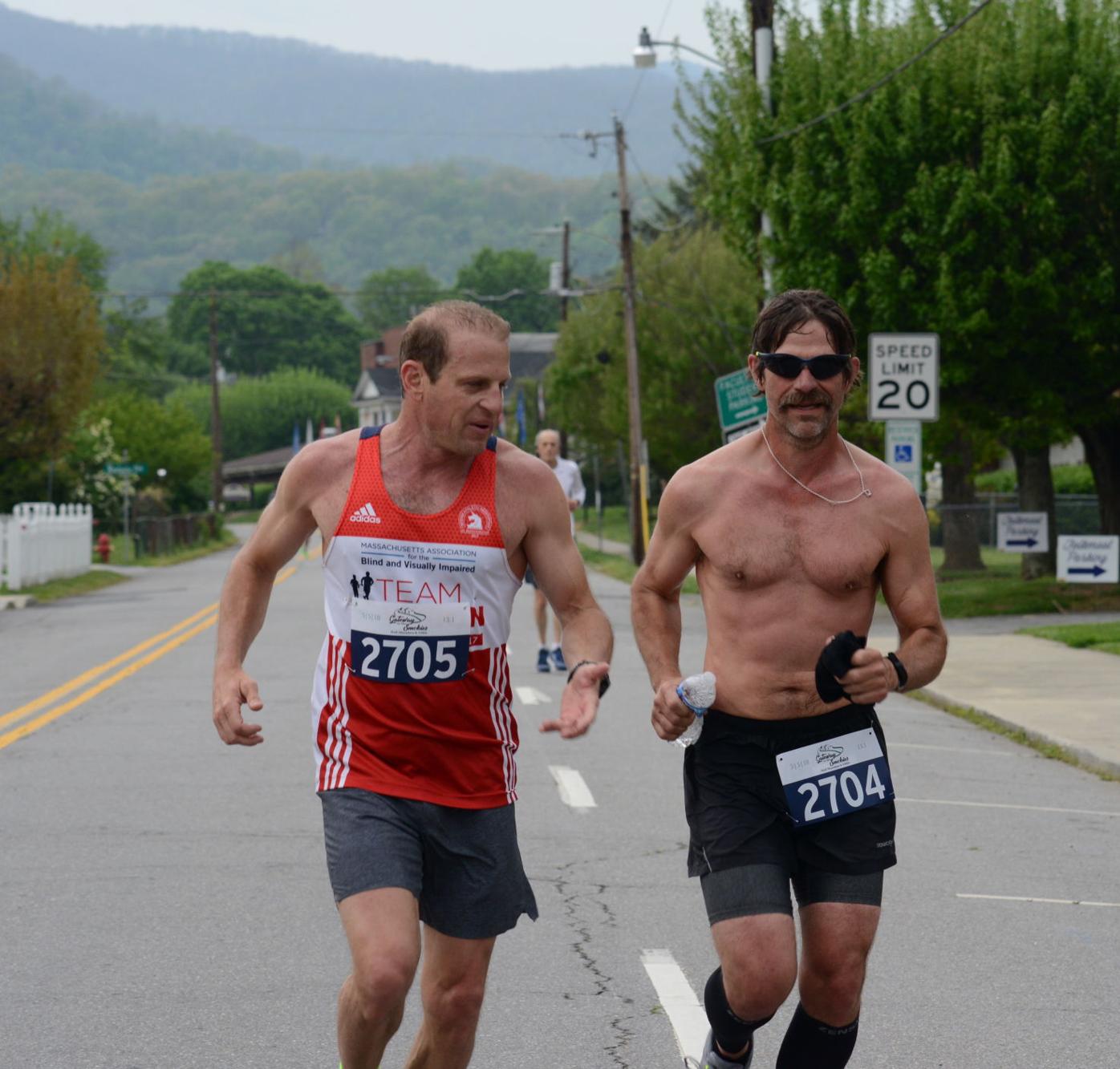 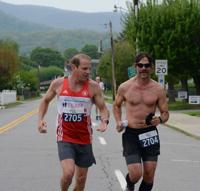 GATEWAY TO THE SMOKIES — Runners in a previous Gateway to the Smokies Half-Marathon make a break for it during a flat stretch of the course through Hazelwood. 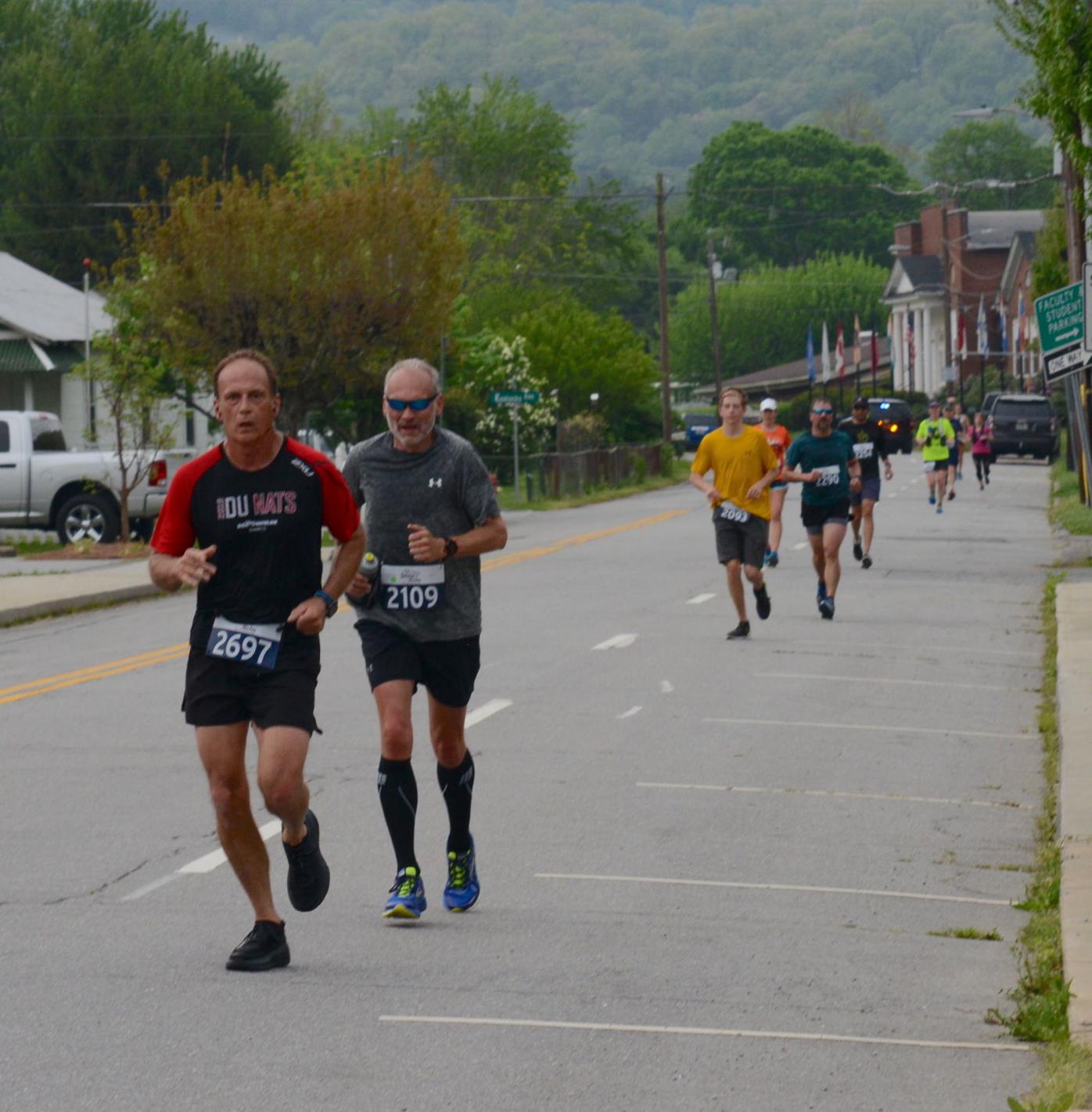 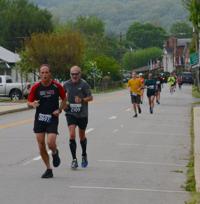 Runners in the the Gateway to the Smokies Half-Marathon last year make a break for it during a flat stretch of the course through Hazelwood.

PAYING TRIBUTE — The Riley Howell Mighty Four Miler, now rescheduled for October, will benefit the foundation founded in his name. A collection of memorials and tributes sent by people from across the country who were moved by Riley’s heroism are on display in the family’s home.

ON THE GO — Riley Howell, right, pictured with his lifelong friend Logan King, on a hike. Howell loved being active and ran track — which makes the Mighty Four-Miler race a particularly fitting tribute.

GATEWAY TO THE SMOKIES — Runners in a previous Gateway to the Smokies Half-Marathon make a break for it during a flat stretch of the course through Hazelwood.

Runners in the the Gateway to the Smokies Half-Marathon last year make a break for it during a flat stretch of the course through Hazelwood.

This story was originally going to run in The Mountaineer in March 2020, but the race was canceled due to COVID, and the article never appeared. With the race back on this year, the article is finally running — just a year later than initially planned.

A major event is returning to the Haywood County running calendar.

Following a two-year hiatus, the Gateway to the Smokies Half Marathon, accompanied by the Riley Howell Mighty Four Miler, will take to the streets of Waynesville on Saturday, April 3.

The Haywood County Chamber of Commerce launched the half-marathon in 2015, but suspended it 2018 due to slagging participation and the challenging logistics of pulling off a major road race. The chamber hoped, however, that a professional race company with more expertise would pick it up.

Enter Glory Hound Events, a powerhouse in the regional running scene. Kevin Fitzgerald, a Tuscola coach who is heavily involved in the Haywood County running community, is friends with Glory Hound Events director Greg Duff and has worked with him on several events.

Fitzgerald asked Duff about taking over the race, and after mulling it over, Duff agreed.

“It was a good course,” Duff said. “We thought it had potential. We do three other half marathons during the season. So we have a strong half marathon following. There was a lot of town support for it, so we thought we could grow it.”

Reflections of a hero: Riley Howell's family searches for a path through the grief

The decision for Glory Hound to pick up the race was made in late winter of last year. But a tragedy prompted a rebranding of that run.

In April 2019, Waynesville native Riley Howell was tragically killed in a school shooting at UNC-Charlotte when tackling the gunman to save the lives of fellow students. Howell was a runner and someone who loved the outdoors. He ran cross country in high school at T.C. Roberson.

Fitzgerald often runs with Thomas Howell, Riley’s Dad. He had the idea to rebrand the four-mile run in Riley Howell’s honor and donate proceeds to the Riley Howell Foundation Fund, which supports victims of gun violence and their families.

Fitzgerald approached Thomas Howell with his idea. He loved it, and Fitzgerald and Duff soon met with the Howell family, along with Howell’s long-time girlfriend, Lauren Westmoreland, and her family at the Westmorelands’ home in Asheville.

They wanted Lauren and Riley’s siblings to name the four-mile run, which they did — dubbing it the “Riley Howell Mighty Four Miler.”

“I think about the reason why we’re doing it,” Fitzgerald said. “That always gives me pause. It just gives me pause because the event that caused us to go in this direction is so tragic. But I think that if there’s something we can do to honor his memory in a positive way and to raise money for the foundation that was established in his name, that’s a positive outcome.”

Duff, “without any nudging or encouragement from anybody,” according to Fitzgerald, decided that 100% of proceeds from the four miler would go to the Riley Howell Foundation Fund.

Duff’s act of generosity is not lost on the Howell family.

“It’s just an extremely generous gesture,” Thomas Howell said. “You go to a race sometimes and you see a portion of the proceeds are donated to so and so. You never quite know how much. It’s 10% or whatever and you don’t really pay attention. But Greg wants to give everything after he gets his expenses paid for. And that part’s extremely generous.”

For Duff, rebranding the race and making the donation was an easy decision.

“For me personally, it was just an opportunity to do something,” Duff said. “When there’s a situation like that anywhere, you feel helpless. Or at least I do. This was a situation where I didn’t have to feel helpless. I could do what I do really well and turn it into something positive. It just all occurred in a very seamless manner.”

Glory Hound has been doing events in Haywood County for years, including the Lake Logan Triathlon and Haywood Regional Power of Pink.

Duff recognizes the area as a good running community and attractive locale for destination races. That, coupled Glory Hound’s 9,000-person running and athlete database and ability to market through social media, should make the half marathon and four miler a destination event for years to come.

“It’s a very strong community,” Duff said. “But it kind of bottomed out from a running perspective a couple years ago. The population of runners was decreasing. But I think that’s back up on the upswing.”

Duff said Haywood County’s geography is a plus.

“It’s close to a lot of things. As Western North Carolina grows and the running community grows, it’s just a natural center to do running events,” he said.

The race is poised to have a positive economic benefit for Waynesville. Fitzgerald said large contingents from Charlotte, Asheville and other areas are coming for the race.

Fitzgerald hopes to see strong participation among locals as well, noting that the largely flat four-mile route is conducive to walkers.

“Even if you can’t run, sign up and walk the four miler,” Fitzgerald said. “You can do it. Participate. Be a part of this. Be a part of contributing to the foundation and the positive things that it stands for.”

Duff said the event has already gotten a huge amount of support through corporate sponsors, businesses and organizations setting up aid stations and support from the community understanding certain roads will be blocked off that day.

“The town of Waynesville’s been fantastic with this, and so has the Haywood County Sheriff,” Duff said. “It’s a village. I think it’s really shown itself well for the area to take an ownership. Riley was born and raised here, so I think there is that ownership and show of kinship. I think that’s shown through all the involvement that we’re getting.”

The Gateway to the Smokies Half Marathon and Riley Howell Mighty Four-Miler is coming to the streets of Waynesville on Saturday, April 3, afte…