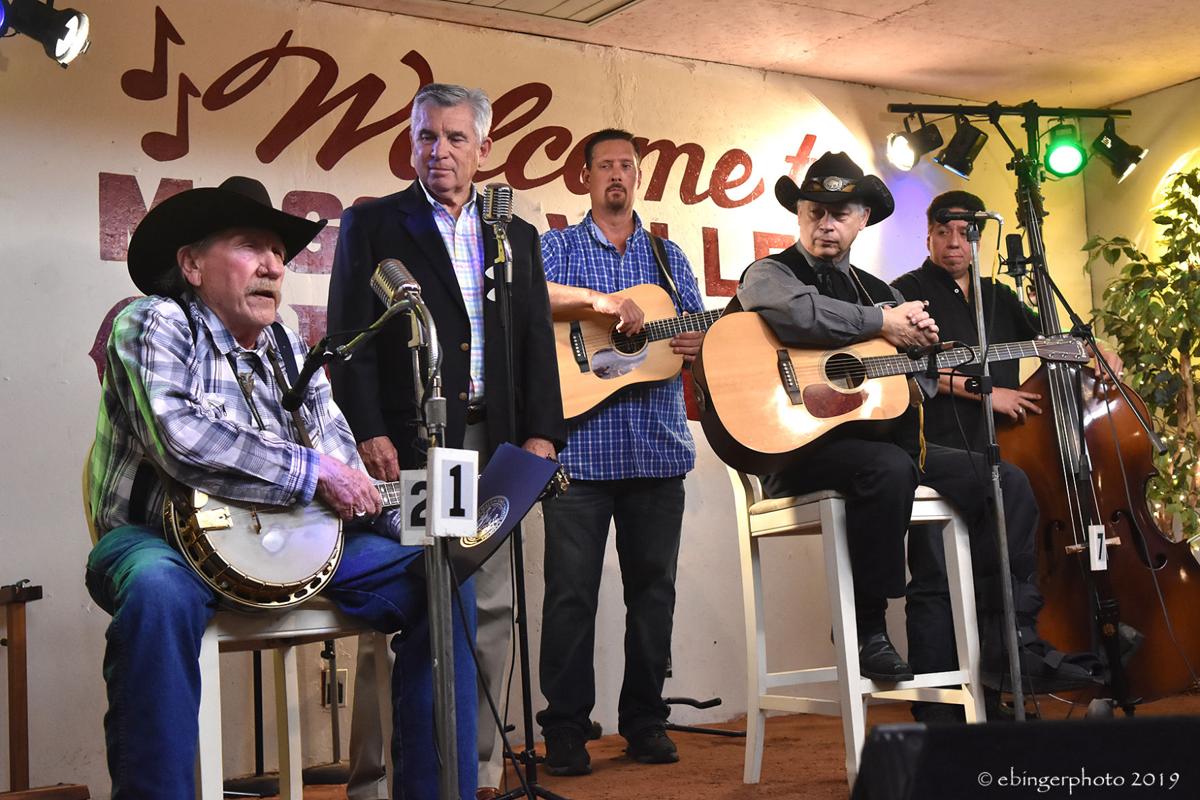 AWARD CEREMONY — NC State Sen. Jim Davis, second from left, presented Fairchild, far left, with an award recognizing his contributions to bluegrass music and the region not long before he passed away. Swilling can be seen up front in the black hat holding a guitar. 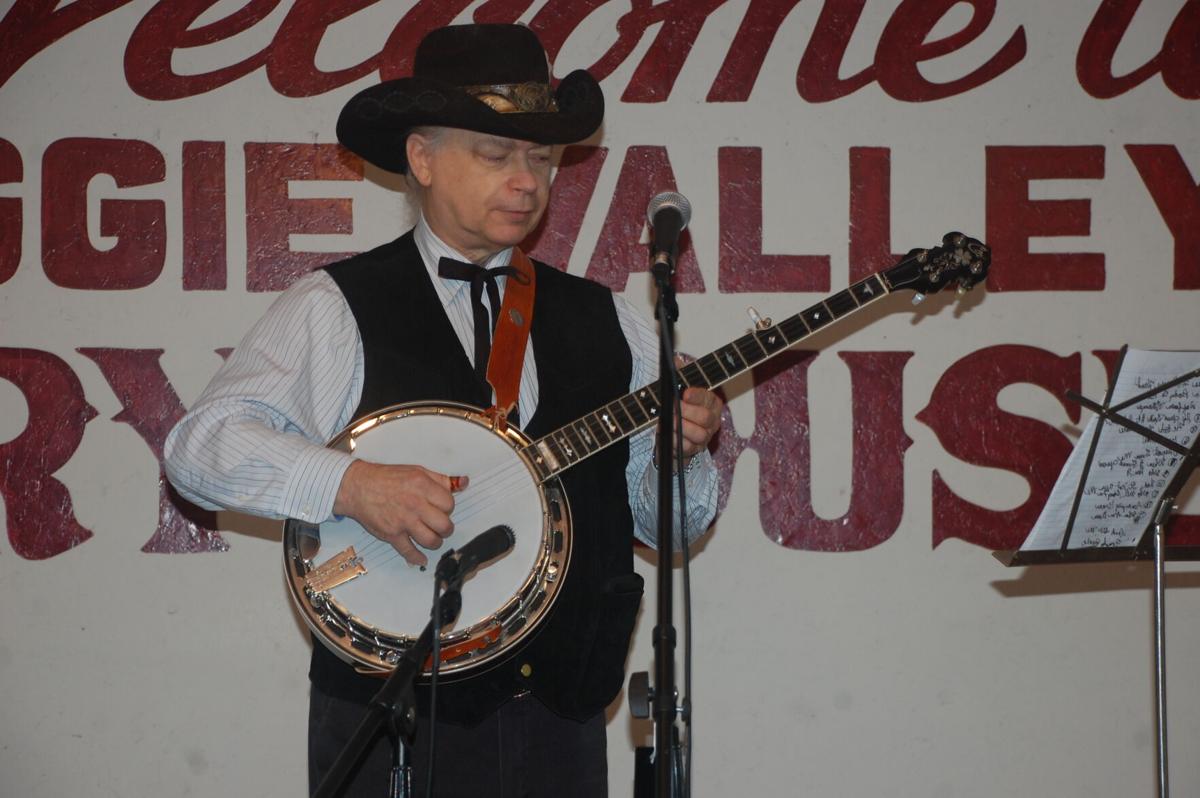 AN EXPERIENCED PICKER — Stephen Swilling has been playing banjo and guitar just about all of his life, and folks who come out to see him perform at the Maggie Valley Hayride — formerly the Maggie Valley Opry — will not be disappointed. 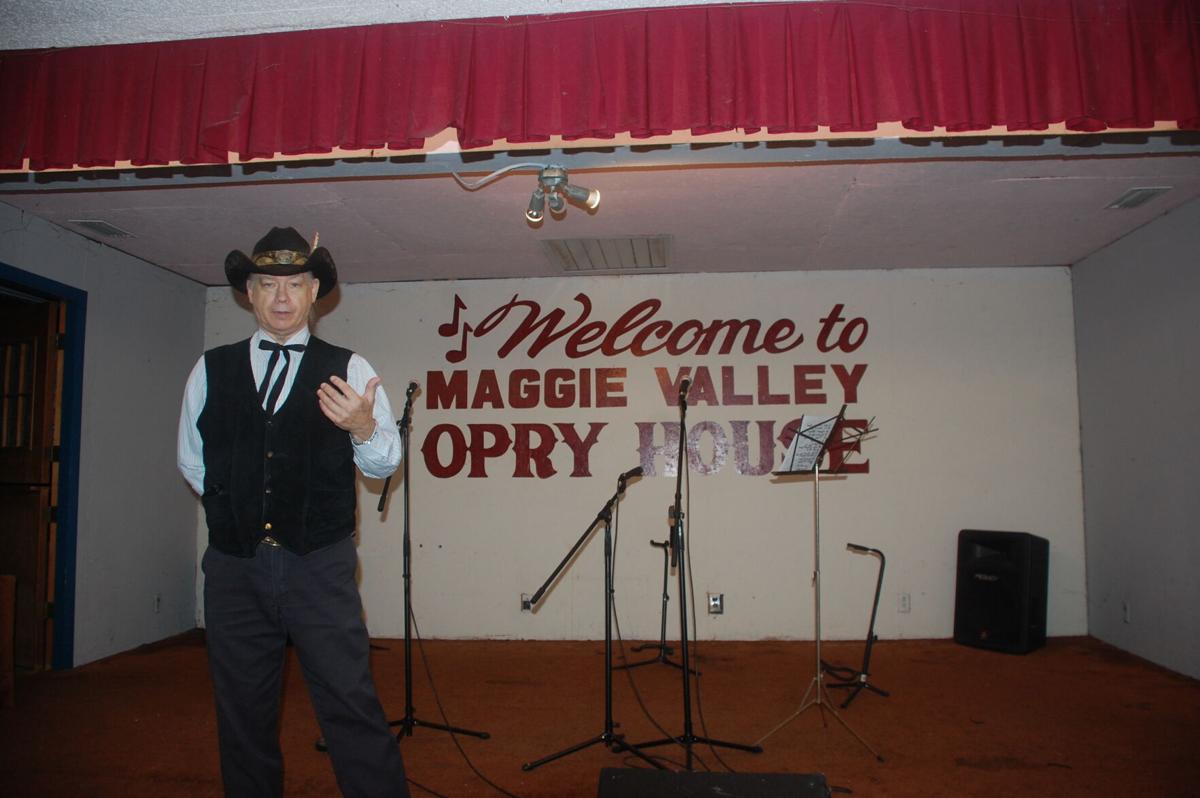 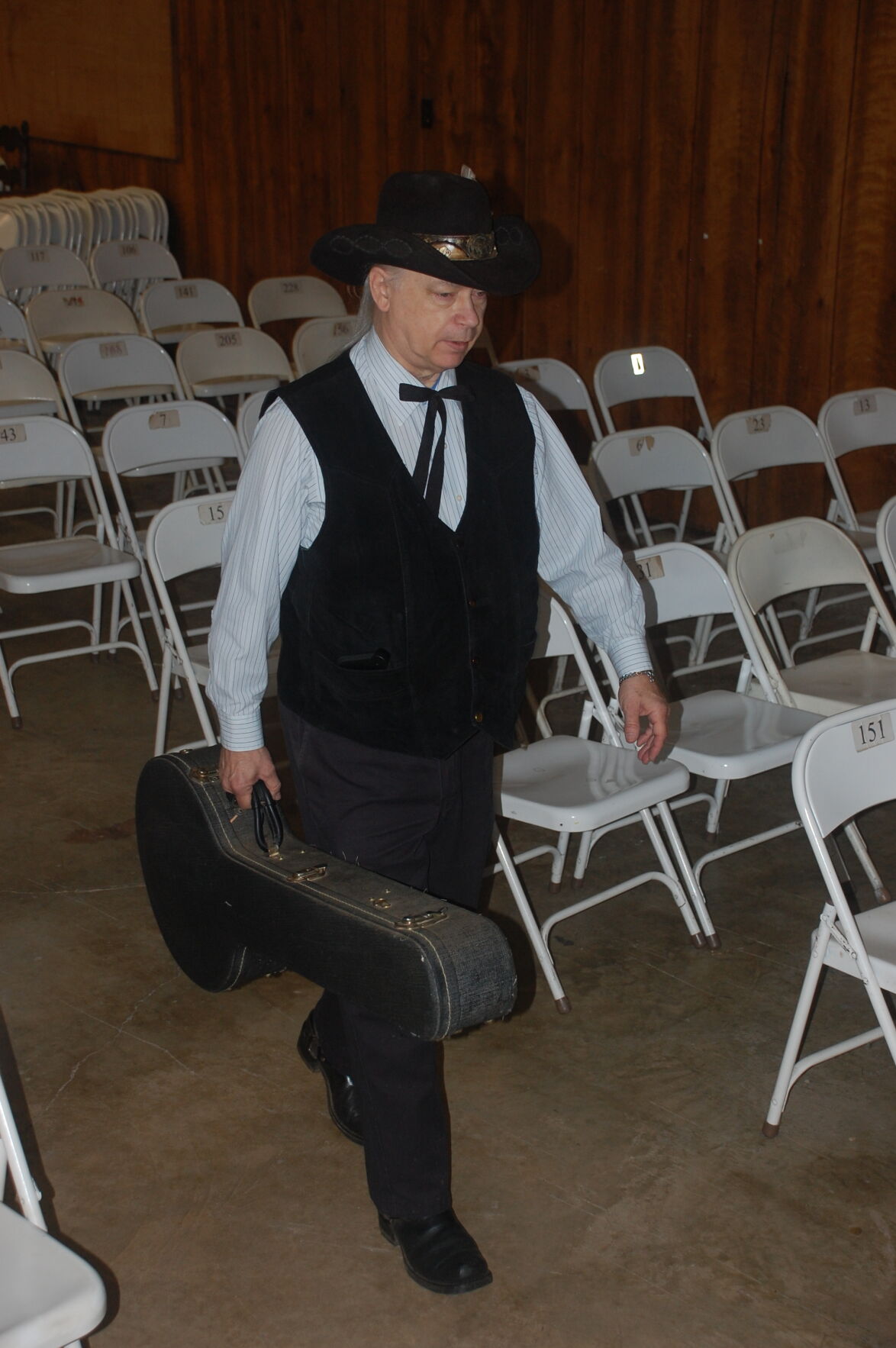 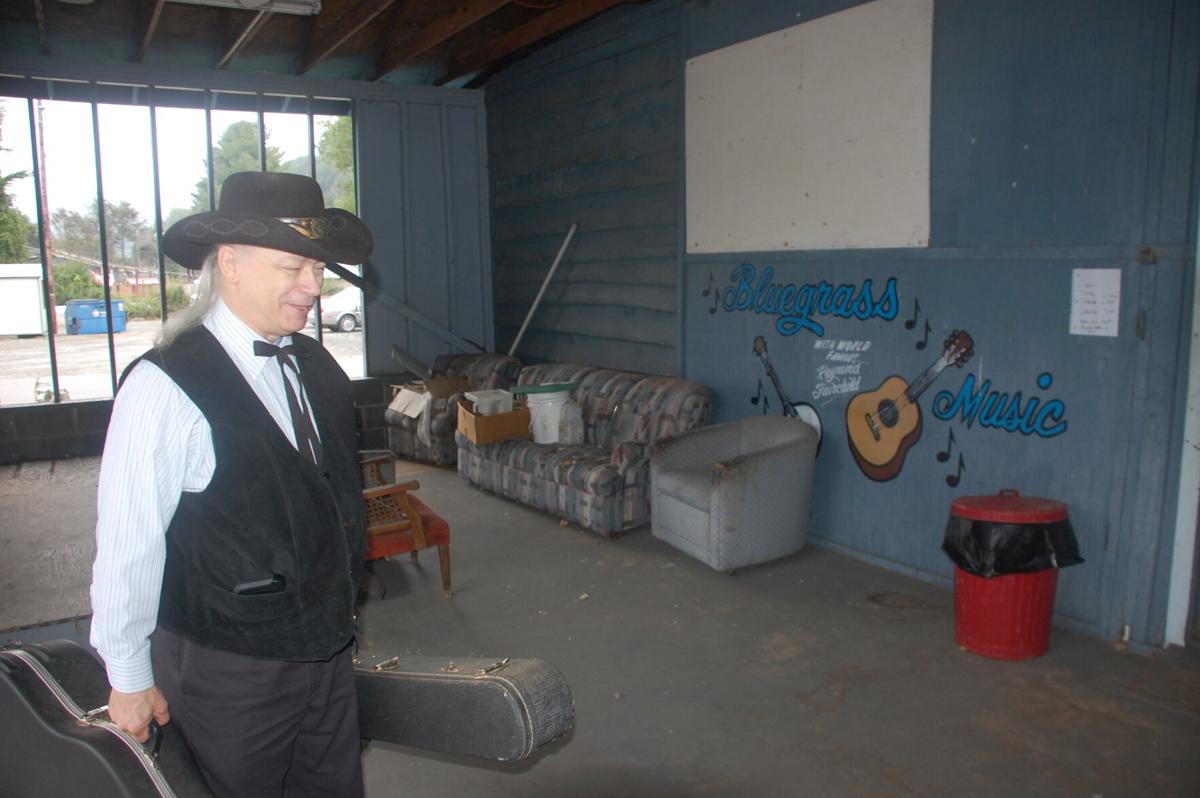 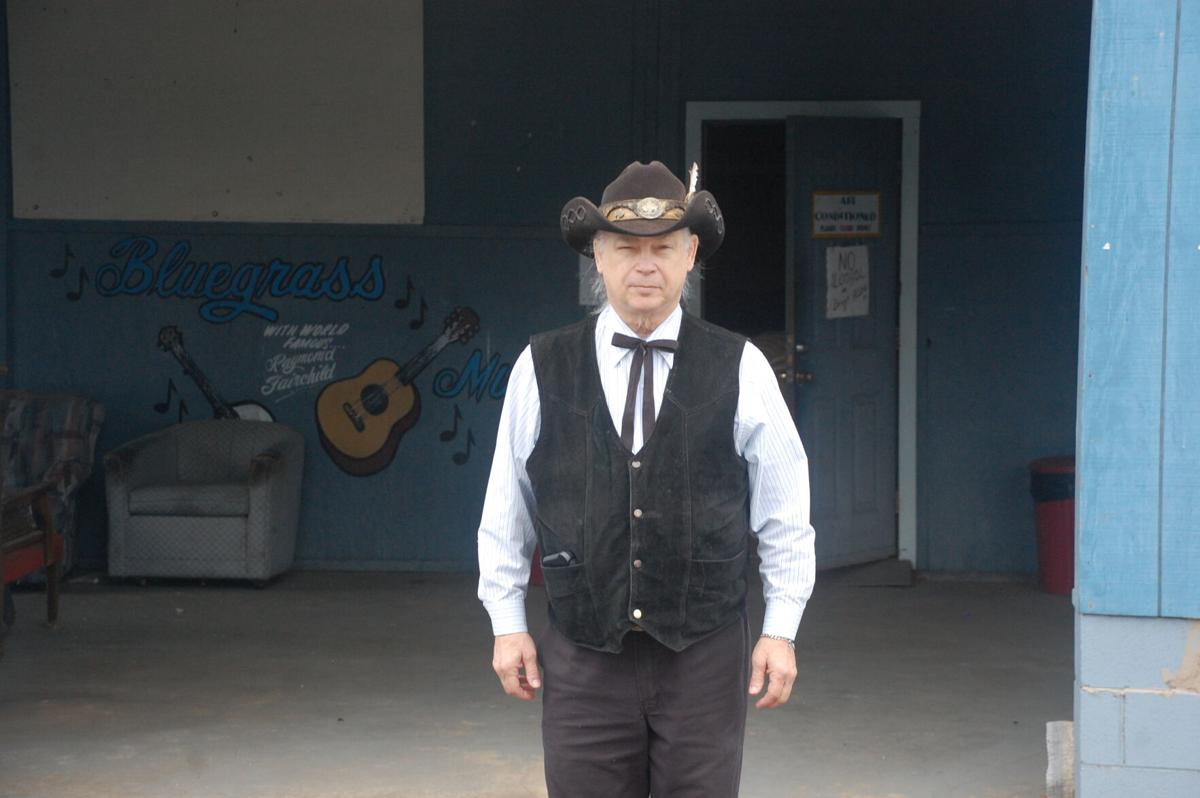 AWARD CEREMONY — NC State Sen. Jim Davis, second from left, presented Fairchild, far left, with an award recognizing his contributions to bluegrass music and the region not long before he passed away. Swilling can be seen up front in the black hat holding a guitar.

AN EXPERIENCED PICKER — Stephen Swilling has been playing banjo and guitar just about all of his life, and folks who come out to see him perform at the Maggie Valley Hayride — formerly the Maggie Valley Opry — will not be disappointed.

One of Maggie Valley’s most beloved spots has long been its Opry house, and almost a year after its founder’s death, it’s getting a new life.

The venue was operated by legendary banjo player and Haywood native Raymond Fairchild since 1988. Once Fairchild passed away in October of last year, one of his closest friends, Stephen Swilling, began to think about how the show could go on.

“I’ve been working on this since before the beginning of this year,” he said.

Swilling himself has been picking on the guitar and banjo for more than 50 years and was a common face at the Opry during Fairchild’s final years.

“My first public performance was when I was 8 years old, and we played bluegrass gospel in a family band from the time I was 8 until I was 16,” he said. “We’d switch instruments around, but I was the only banjo picker of the bunch.”

Born and raised in Dalton, Gaeorgia, Swilling, who is also a preacher, now lives in Cherokee. He recalled the first time he met Fairchild about four years ago.

“My fiancé and I stopped at Country Vittles to eat, and we saw that sign for the Opry, and she said, ‘we need to check that out sometime,’” Swilling said.

“It said Opry house and Raymond Fairchild on the building, and I said, ‘So that’s where his place is. Let’s go over there and check it out,’” he added.

Much to the surprise of Swilling’s fiancé, when he wanted to meet Fairchild, the two quickly hit it off over their shared love of bluegrass music. By the end of the day, the two men picked some tunes together — the first of many — and Fairchild ended up selling Swilling a banjo.

“It’s the best sounding banjo I have,” Swilling said.

In addition, the two men picked a few tunes together — the first of many.

“He said, ‘Steve, I like the way you’re picking that guitar … are you interested in coming over here and helping us?’” Swilling recalled.

Needless to say, Swilling accepted Fairchild’s offer and from then on he could be seen onstage picking the guitar alongside his new friend, and he would even sing a song or two during the shows.

Swilling said that over the last few years of Fairchild’s life, the two men bonded and played together at Fairchild’s final two bluegrass festivals, including the last one in Hiawassee, Georgia, But their relationship grew even more offstage.

“Me and him would go to his house and pick and talk forever,” he said. “I always went and got him and brought him over to the Opry on days when he’d play.”

On the day before Fairchild died, he hit the stage at the Maggie Valley Opry one last time, and Swilling was right there with him. Swilling recalled how tough it was when Fairchild passed away.

“Losing Raymond was like losing a best friend, because that’s what it was,” he said.

But now, Swilling is hoping to get the Opry running again under the name Maggie Valley Hayride. While he plans on keeping most things the same, one big change is that Swilling is planning on having a different show every night, which differs from Fairchild, who typically performed the same show nightly.

“That’s OK if you don’t have a lot of repeat customers,” he said. “But I plan on doing a different show every week.”

Swilling added that he wants some nights to play on a specific theme, such as gospel, classic country western or even specific artist tributes. While Maggie Valley Hayride will offer snacks, soft drinks and coffee, Swilling said music lovers can expect there will be no alcohol served at that venue. He wants it to be family friendly.

“Anytime the kids find a place with good music where they can have a good time, some adult comes along and wants to jerk it out from under them,” Swilling said. “Then they don’t have a place to go, and they go get in trouble by finding something else to do, then the parents can’t figure out why.”

As of now, Swilling is playing a one-man show where he alternates between the guitar and banjo and works in a few songs he wrote himself. However, he is looking for others who are willing and able to play alongside him.

“Pickers are hard to find. It’s like Raymond said, too. Maybe one in 100 can play bluegrass. Most people learn one style of music,” Swilling said. “The ones that can pick don’t seem to be dedicated and the ones that can’t pick are the ones that are willing to play.”

Another challenge this year has been working under Gov. Roy Cooper’s executive order in response to the coronavirus pandemic that has limited crowd sizes.

“We were only allowed like 10 people, and there was a couple of times we had 10 people in here, which is a whole lot better than having two or three,” he said.

“I learned a lot of stuff from Raymond, and I also know this from preaching. It don’t matter if you have one, three or a whole houseful. If you just have two or three people here, you perform like you’ve got a full house,” he added.

Tickets to shows are $12, and children under 12 get in free. Performances are Friday and Saturday at 7 p.m. However, Swilling said he’s hoping to expand on that.

“If I can get people to come, I’ll stay open all week long,” he said. “They’ll get a good show. Everyone who has come out so far has told me they plan on coming back out.”