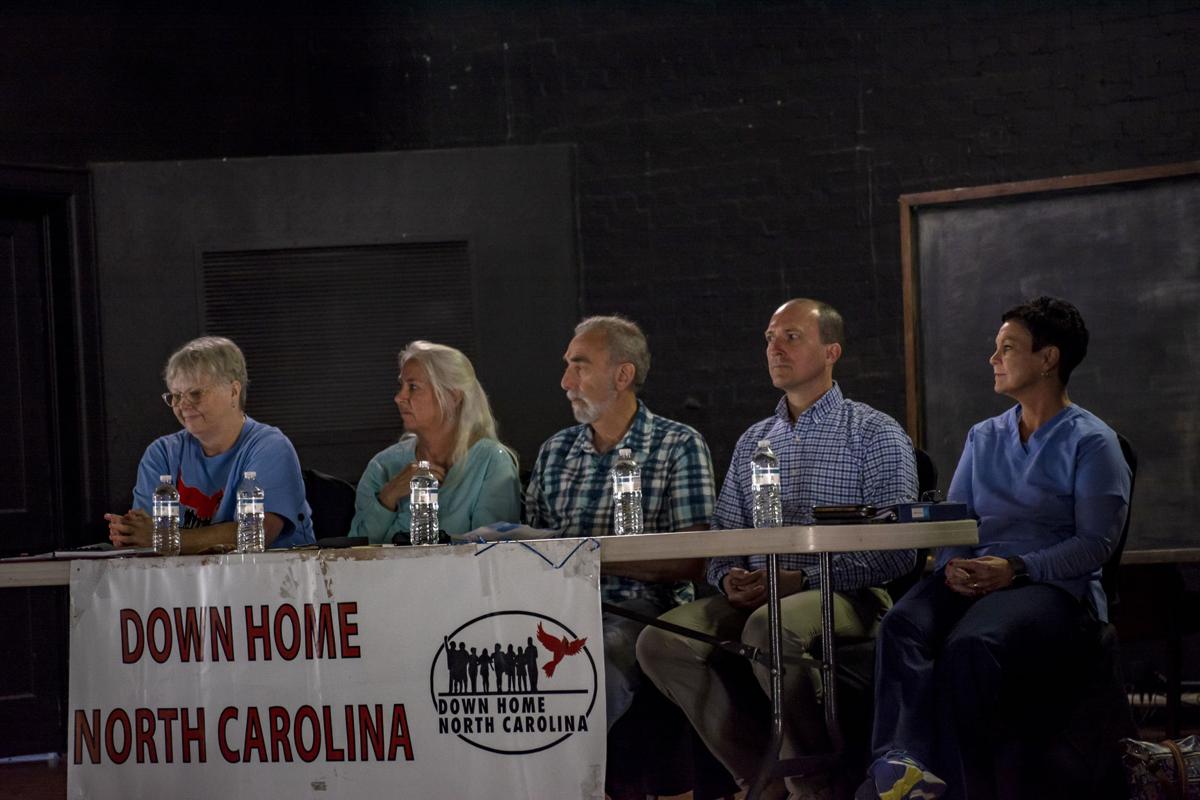 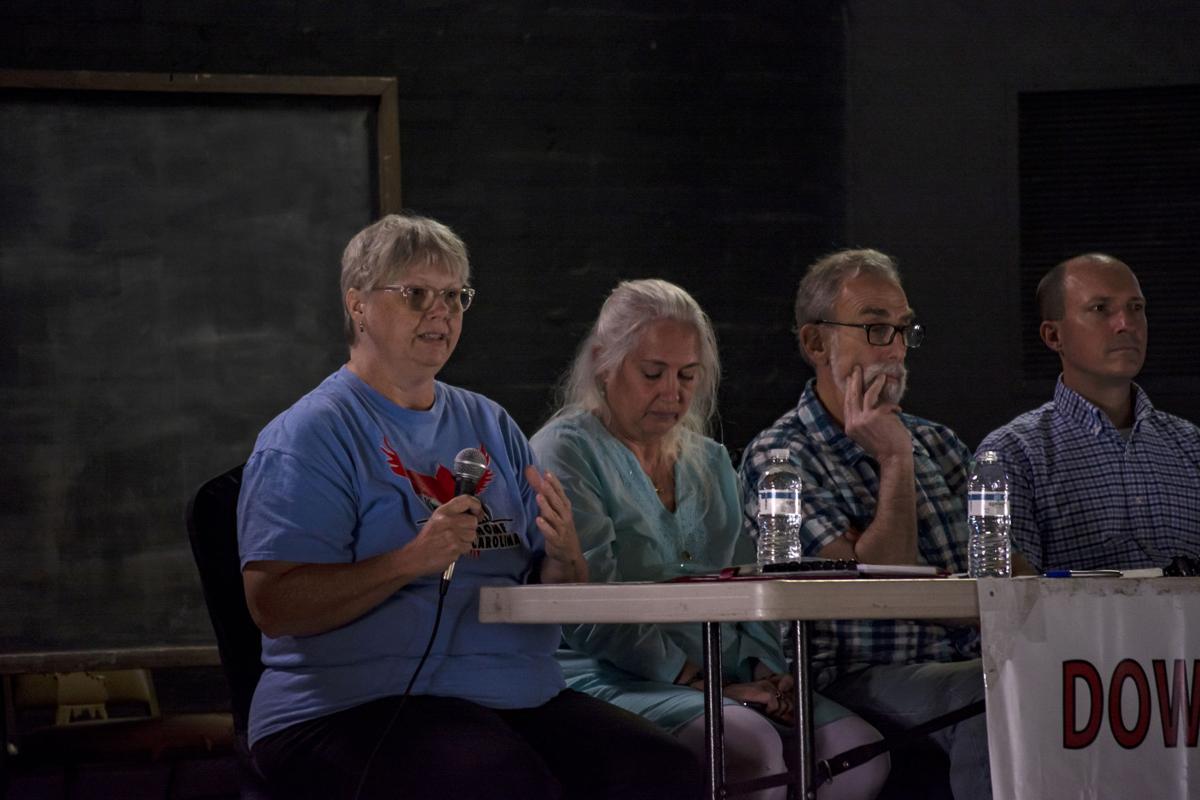 PERSONAL TESTIMONY — Lyn Carver offered personal stories about her experience with the Affordable Care Act and her frustrations with the state's refusal to expand Medicaid. 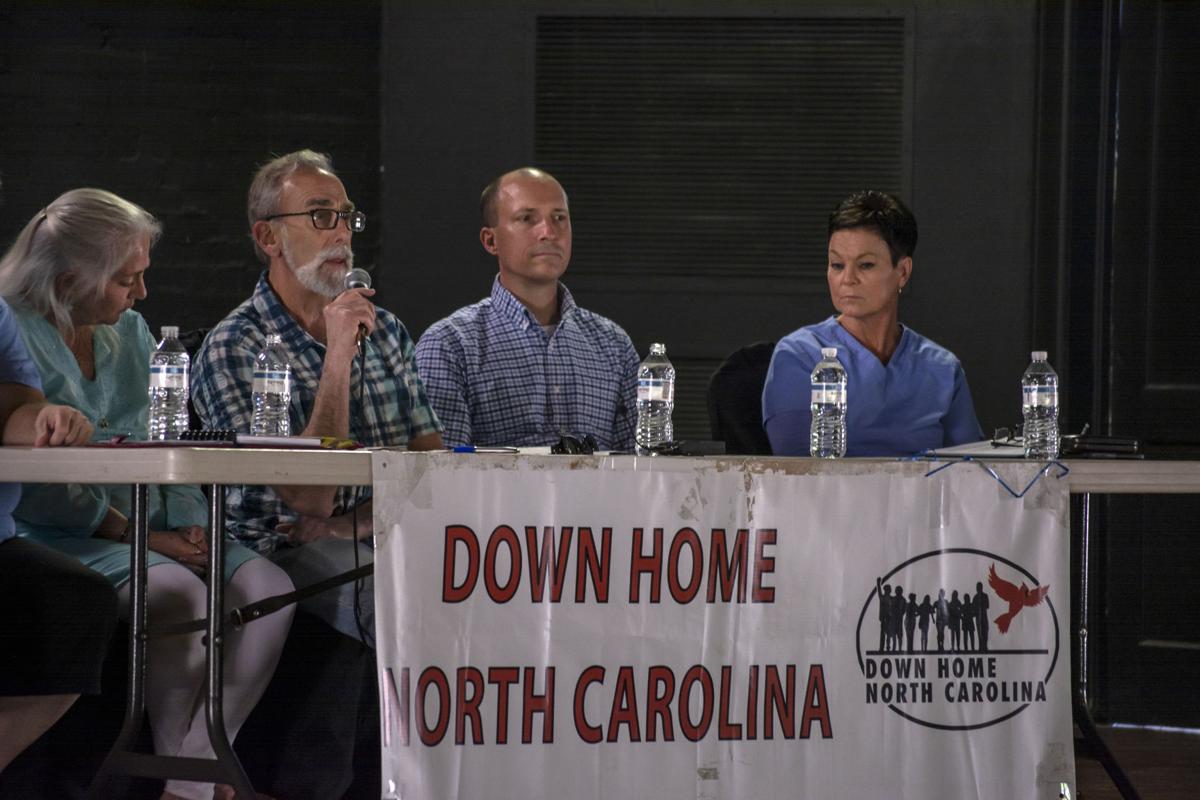 LOCAL DOCTOR — Steve Wall, a Haywood pediatrician, addressed the far-reaching issues with mental health and substance abuse in the county that could potentially be tempered by an expansion. 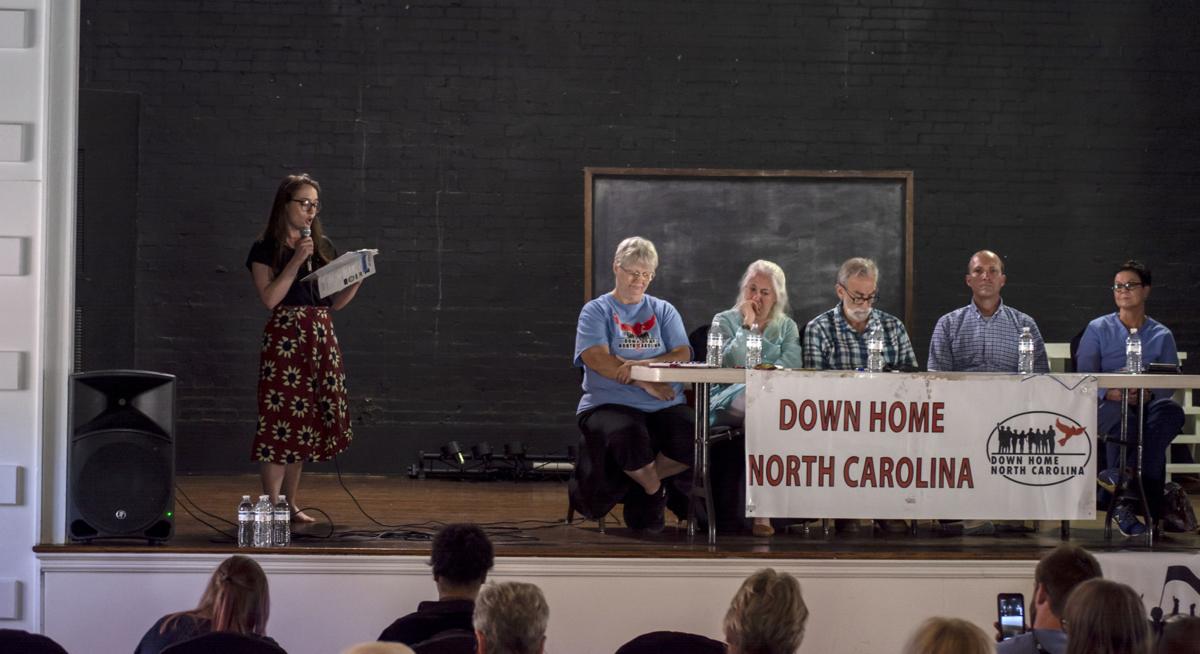 DOWN HOME — Chelsea White, a Down Home NC organizer, spearheaded the town hall meeting at the Folkmoot community center.

PERSONAL TESTIMONY — Lyn Carver offered personal stories about her experience with the Affordable Care Act and her frustrations with the state's refusal to expand Medicaid.

LOCAL DOCTOR — Steve Wall, a Haywood pediatrician, addressed the far-reaching issues with mental health and substance abuse in the county that could potentially be tempered by an expansion.

DOWN HOME — Chelsea White, a Down Home NC organizer, spearheaded the town hall meeting at the Folkmoot community center.

The expansion of Medicaid has been a hot button issue for North Carolina since the passage of the Affordable Care Act in 2010.

During last year’s midterm elections, the proposal to expand the program to extend coverage to more low-income North Carolinians was a prominent factor in the campaigns of all of the candidates for state office. Democrats Joe Sam Queen, Rhonda Cole Schandevel and Bobby Kuppers advocated strongly for an expansion, while Republicans Mike Clampitt, Michele Presnell and Jim Davis came down against the change.

The election didn’t provide much in the way of insight on how the public viewed an expansion — Queen won his race for NC House District 119, but Schandevel lost to Presnell for control of NC House District 118 and Davis won out over Kuppers for the NC Senate District 50 seat.

The issue has remained on the table in the state legislature since then, with newly elected Democrats pushing for expansion now that they’ve broken the Republicans’ veto-proof majority in Raleigh. That push has been bolstered by local efforts throughout the state, including locally by groups like Down Home North Carolina.

Recently, Down Home invited members of the community to a town hall-style meeting at the Folkmoot Community Center to discuss the rationale behind a proposed Medicaid expansion. Speakers from throughout Western North Carolina shared their personal experiences with the system as it exists now, as well as their projections for what benefits might accompany an expansion.

The arguments for expansion

One of the primary arguments in favor of Medicaid expansion during the town hall was a philosophical one.

Schandevel, who was on the panel of speakers for the evening, said the expansion is “just the morally right thing to do.”

The Rev. Joslyn Schaefer, a Haywood County minister, said the move to expand the program aligned with her spiritual beliefs as a leader in the religious community.

“At our church, we renewed our baptismal covenant and one of the questions in that covenant is ‘do you promise to respect the dignity of every human being?’” Schaefer said. “And healthcare is certainly one of the basic human rights. I’m happy, as a Christian, to be advocating for that.”

Beyond the philosophical arguments to expand, though, were numerous testimonies about a broken system that allows many members of society to slip through the cracks.

Haywood pediatrician Steve Wall talked at length about the impact insufficient medical care has on the community, ranging from the youngest Haywood County residents to the oldest.

“I recently had a 2-year-old brought in by DSS who had spent the day in the living room of her house trying to revive her dead mother who didn’t have medical care and died of an overdose,” Wall said during the meeting. “It’s hard to say what kind of traumatic after-effects that will have in that child’s life. The lack of medical access and rehabilitation access is wreaking havoc on our families in this county.”

Lack of insurance for adults who don’t qualify for Medicaid and can’t afford other options has a ripple effect into the younger generations of the community, Wall said.

“When a parent can’t take care of their health, it affects their children,” he said. “We see that in the anxiety and depression children face when they see their parents suffering and not getting access to medical care.”

A Medicaid expansion, Wall said, could do a lot for mental health treatment in the region.

“There’s a lot of pressure to prescribe medication. I think that would be lessened if we had a Medicaid expansion,” he said. “It would allow us to get more therapists and more mental health services, which is really what we want instead of an over-reliance on medication.”

Schandevel also argued the expansion could be an economic driver for Western North Carolina. She said the expansion would create new jobs in the healthcare industry, but that job growth would extend into other sectors as well over time.

“This effect occurs because Medicaid funding received by hospitals, clinics or pharmacies is used to pay workers’ salaries and buy other goods and services,” she said. “These economic benefits multiply as funds are used in turn to pay mortgages or rent, to buy food and to pay state and county taxes.”

Down Home invited Davis, Presnell, Queen and North Carolina District 47 Senator Ralph Hise, a Republican, to the event, but none were availabl…