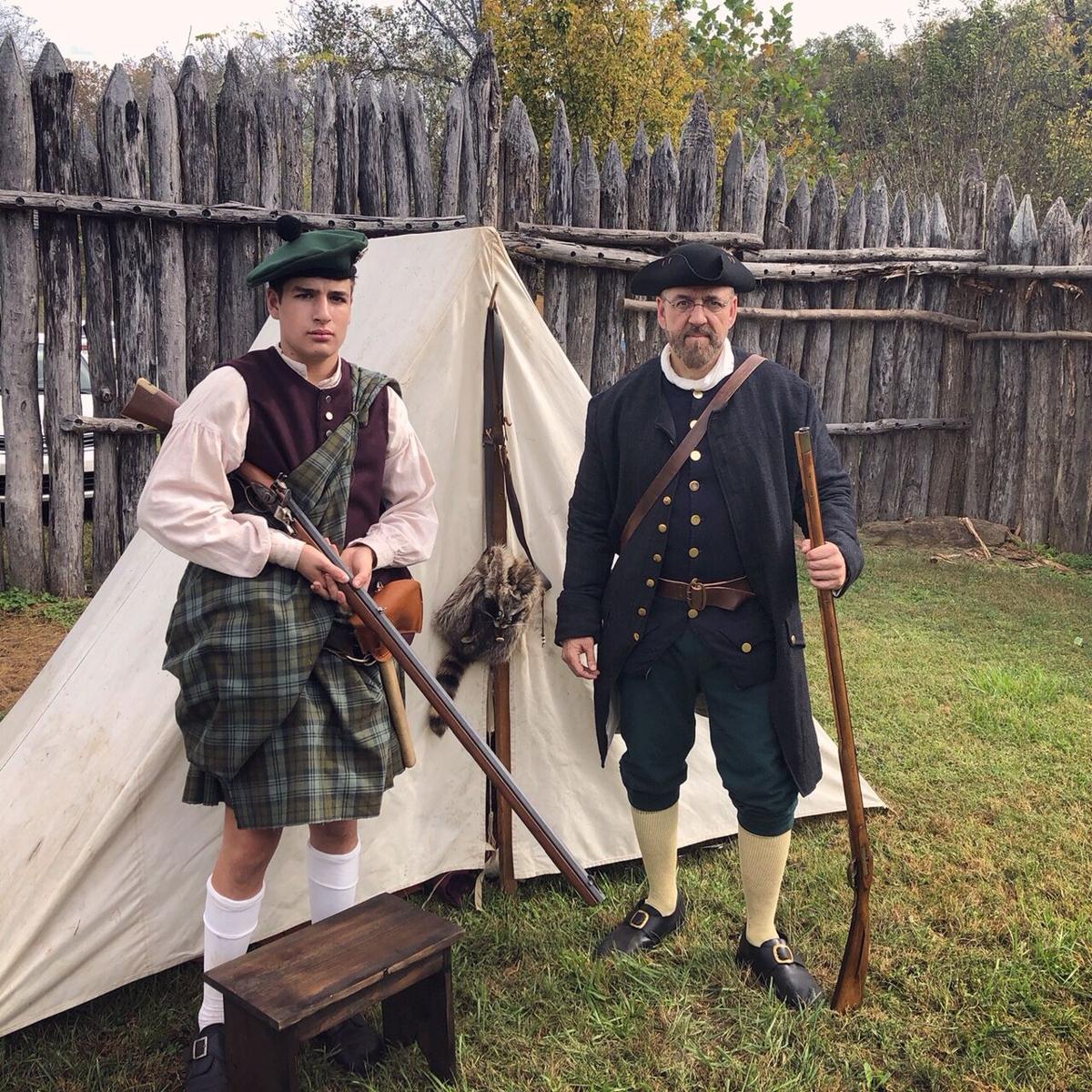 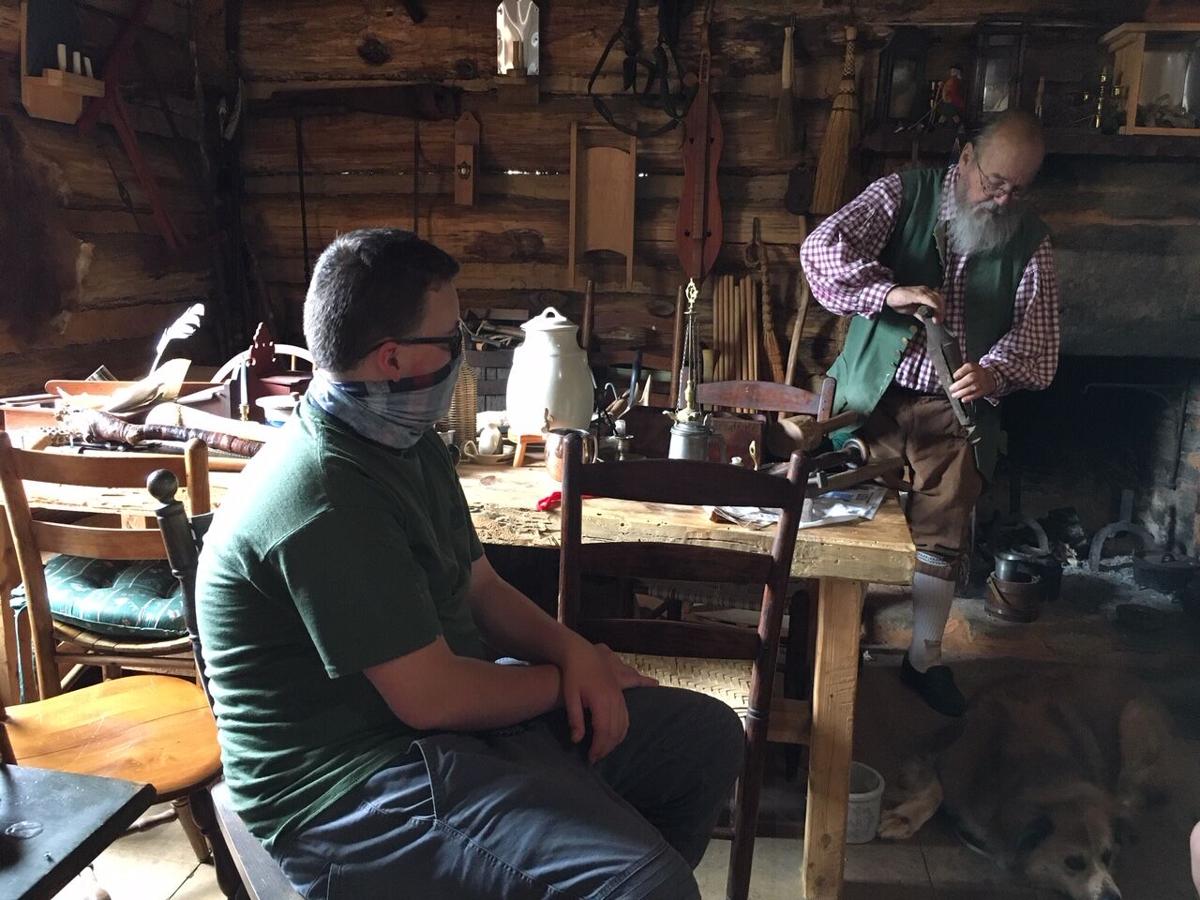 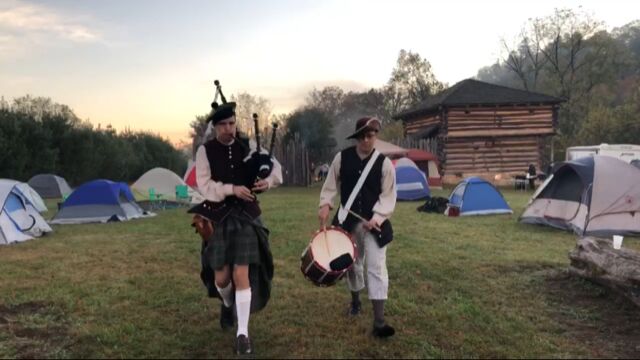 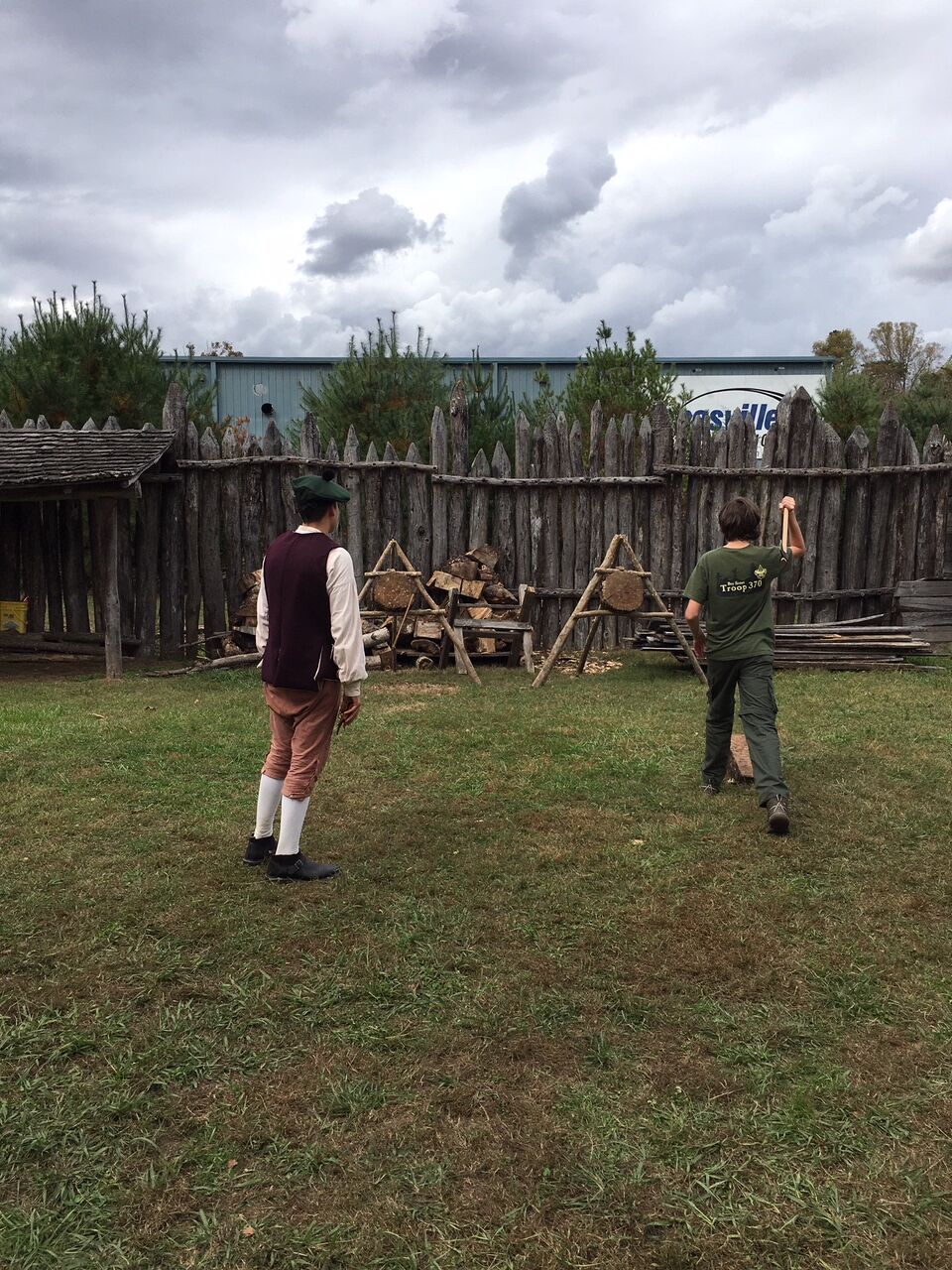 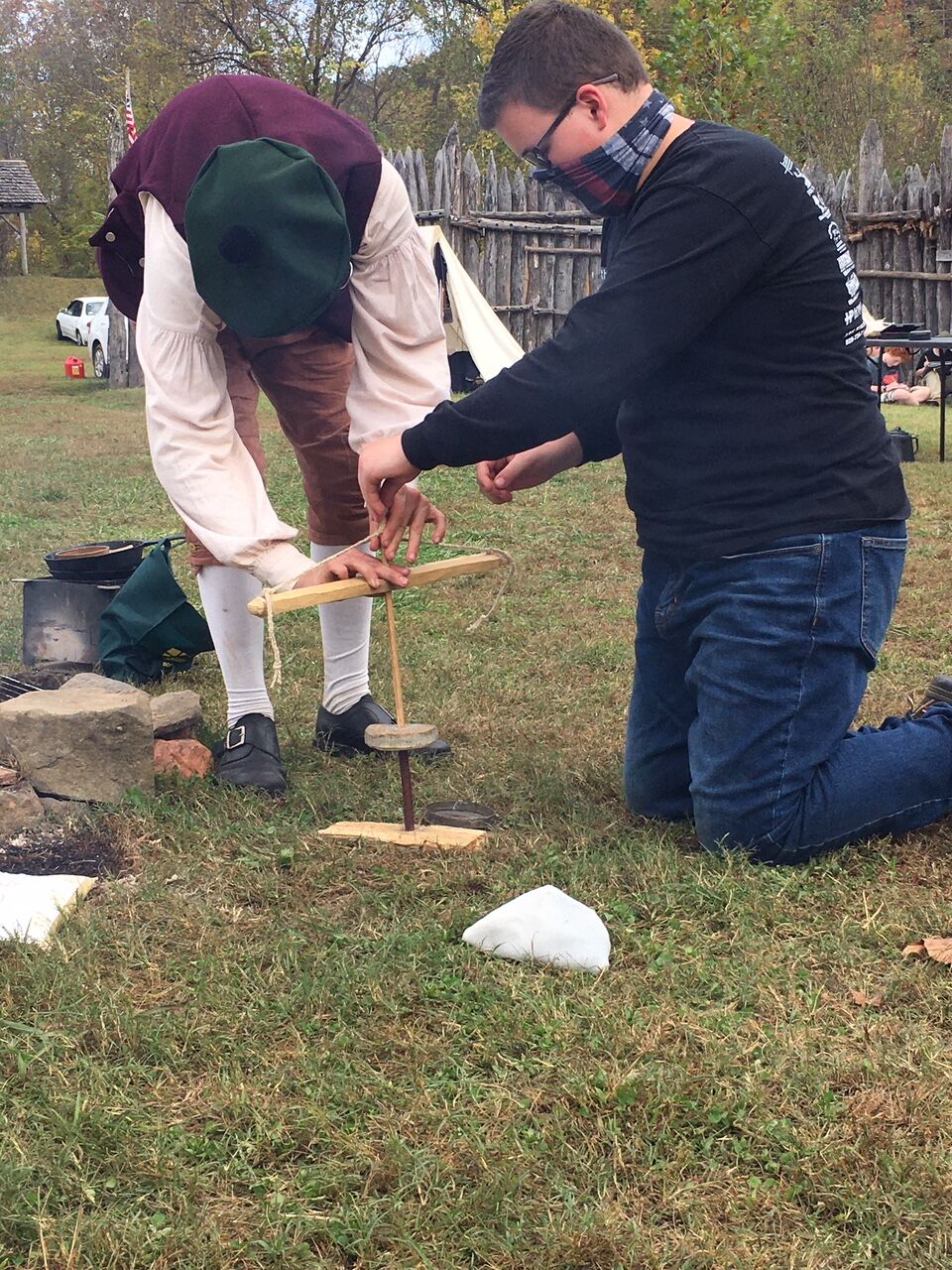 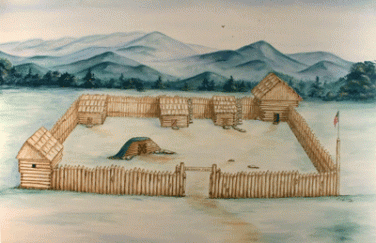 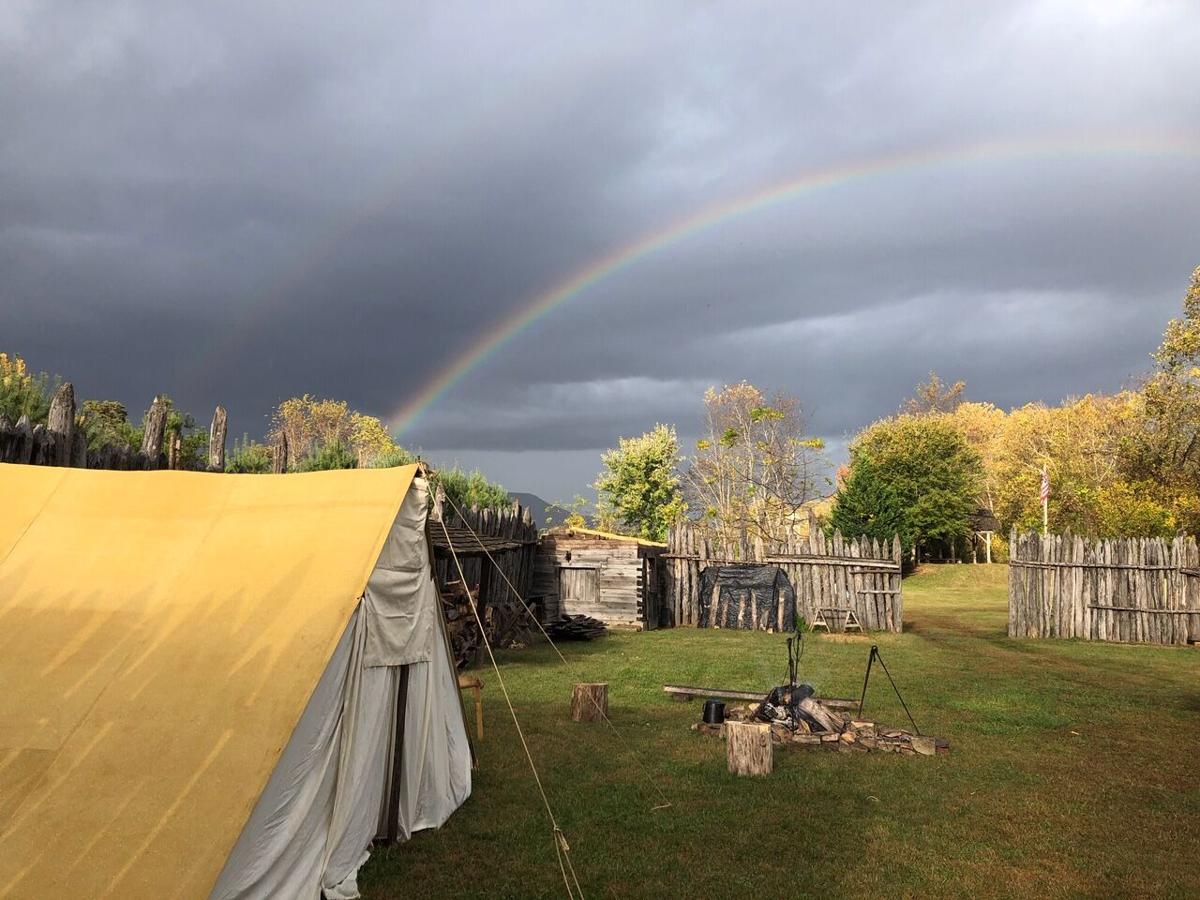 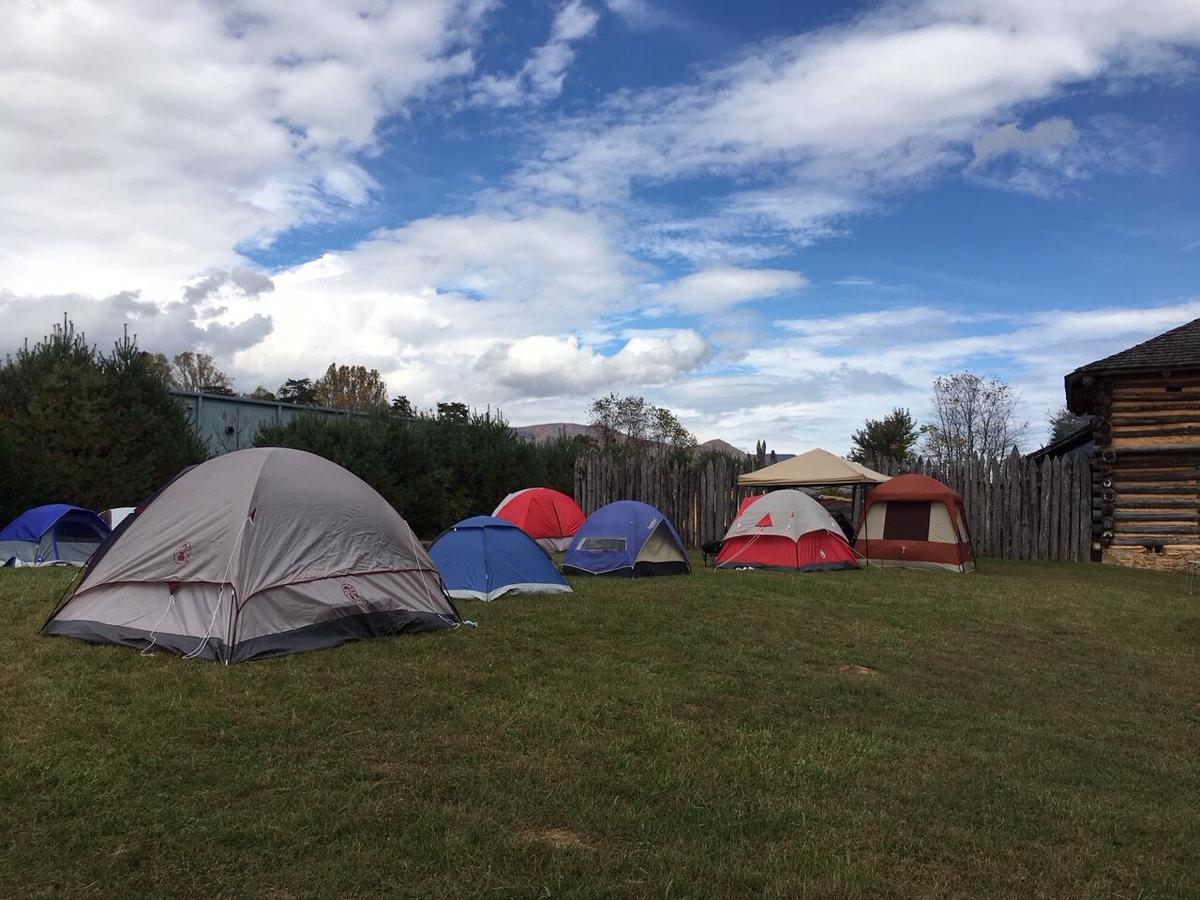 Boy Scout Troop 370 recently traveled an hour down the highway and 240 years back in time for a two-night camping trip to Davidson’s Fort Historic Park in Old Fort.

It was a weekend experience of living history from the late 1700s and of the pivotal battles that led to the creation of the United States of America. Virus precautions were observed, and during the weekend, the Scouts safely rotated through craft stations to learn colonial-era skills.

Life Scout Christian Basulto, whose family is active in historical interpretation of late 18th century life, planned the weekend’s events. His family wears hand-made period clothing and gear. He’s had many experiences with the history and lore of the time.

“I’ve learned most importantly to appreciate history and the people who came before us,” Christian said. “Historical interpretation also goes hand-in-hand with learning important skills such as sewing, fire building, camping and cooking. I wanted to share some of these skills that we have learned with the boys in the troop.”

Scouts earned the Indian Lore Merit Badge on the weekend.

“We bring groups like the Boy Scouts to the fort to learn about American history — not only about the early life of the settlers, but also the heritage and history of Native Americans,” said Native Cherokee Jason (Big Bear) Cook, vice president of Davidson’s Fort Historic Park

Armando Basulto taught the Scouts whittling techniques for camp site tools. He also demonstrated the parts of flintlock muskets and how the weapon is shot.

“Ultimately the study of history is the study of self,” said Basulto. “How did we get where we are today? Experiencing first-hand 18th century America, in this little frontier fort on the outskirts of the Revolutionary War, allows the imagination to envision what it was like in this formative time in our nation’s history.

“Interpreters are not play-acting a role but rather re-creating a well-researched personal experience in what is often termed ‘experimental archaeology.’ The real joy comes in sharing your findings and experiences with visitors like these Boy Scouts.”

“This was a really fun trip. We learned a lot about the Revolutionary War and the conditions they lived in. We learned about muskets and tomahawks, and about Native American life as well,” Lance said.

Christine Basulto taught the Scouts a sewing lesson, essential for men on the frontier.

“I taught them a stitch they can use to hem a pair of pants,” she said. “For the boys who picked it up faster, I showed them a back stitch that can be used to repair a split seam. Knowing basic stitches means that all you need is a needle and thread to repair your own clothing.”

Troop 370 Scout Leader Jack Caldwell was impressed with the planning for the weekend.

“It was a great job, and the people there were out of this world. It was good to have these young men get out in fresh air and be free. They learned Indian dancing with Big Bear, fixed their own meals and cleaned up. It is definitely a great place to visit for kids to learn about Western North Carolina history,” Caldwell said.

“Davidson’s Fort shows boys and girls that life on the frontier was hard, and what their ancestors had to go through to get where we are today,” said Quartermaster Jordan Lowdermilk. “It teaches basic skills that they might not learn by playing video games all day.”

“We loved having the Scouts at the fort,” said the historic park’s President Bob Martin. “All the boys acted as Scouts should. Great troop and wonderful leadership.”