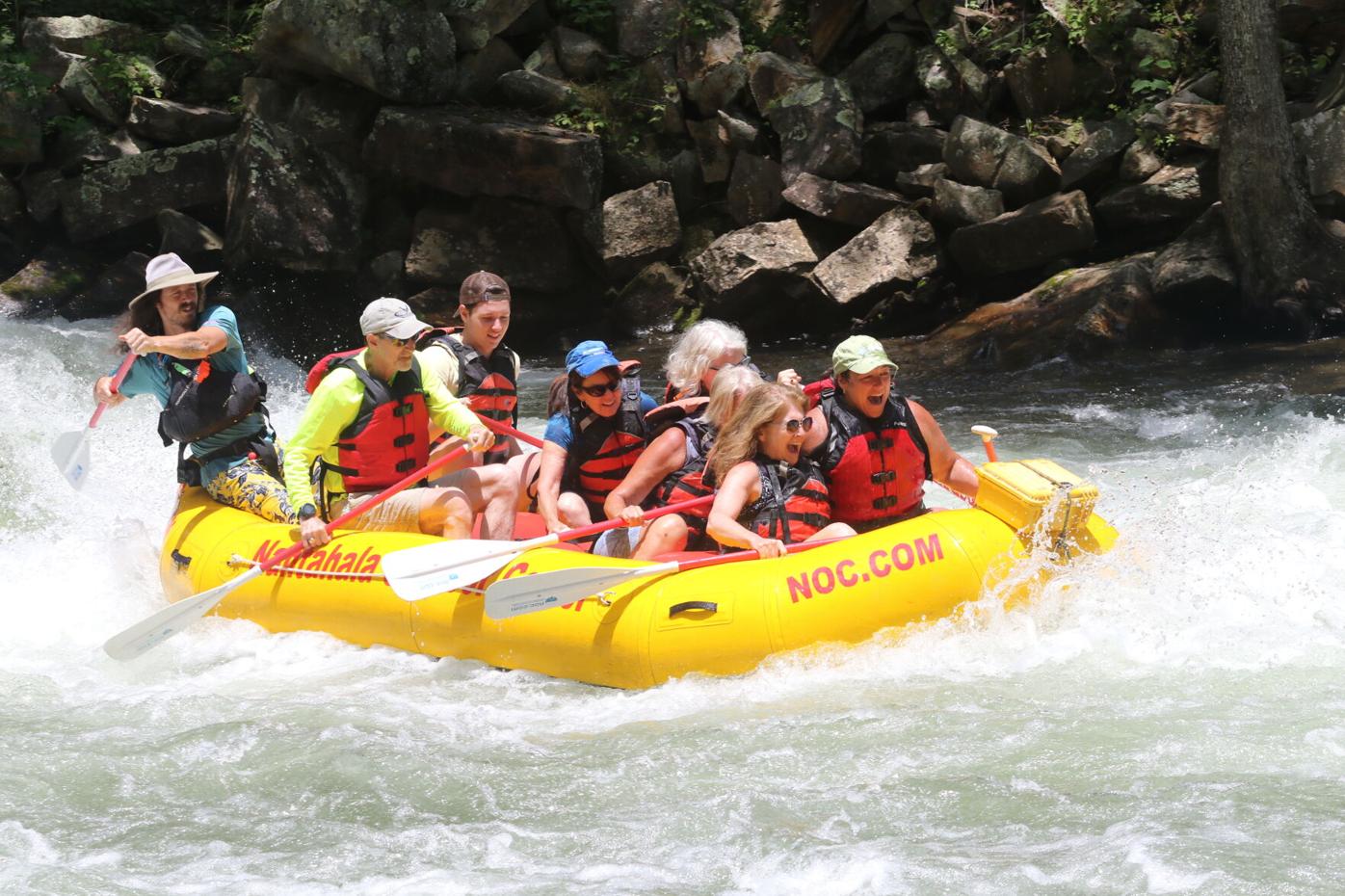 UNEXPECTED FINDS — After a rafting trip in the Nantahala Gorge, writer Patrick Johnson stopped by Bryson City and found a copy of an old book he used to have, “The Complete Book of Running.” 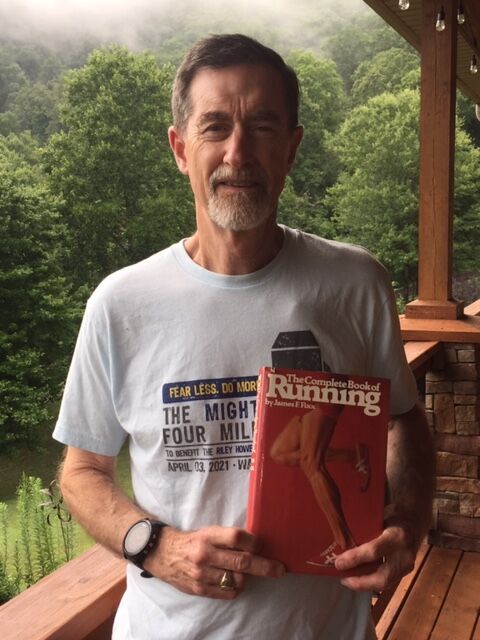 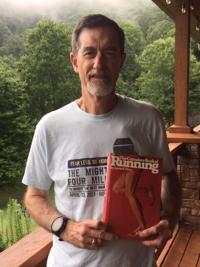 ‘THE COMPLETE BOOK OF RUNNING’ — Running is a wonderful exercise, but just one part of a complete healthy lifestyle, writes Patrick Johnson.

UNEXPECTED FINDS — After a rafting trip in the Nantahala Gorge, writer Patrick Johnson stopped by Bryson City and found a copy of an old book he used to have, “The Complete Book of Running.”

‘THE COMPLETE BOOK OF RUNNING’ — Running is a wonderful exercise, but just one part of a complete healthy lifestyle, writes Patrick Johnson.

“It’s a treat being a long distance runner.” — Alan Sillitoe, “The Loneliness of the Long Distance Runner”

Every summer, Kathie and I take few a rafting trips on the Nantahala River in Swain County with our grandchildren. This summer on the first one we got lucky with a nice sunny day, not too hot or too chilly. Our very skilled and informative raft guide was a true free spirit who told us he’s been working on the gorge for 12 consecutive summers.

The Nantahala Gorge was beautiful that day. Kathie, Jonathan and I enjoyed our trip guided by Braden and his stories about the gorge. I loved just looking up at the sky while we were coasting down the river bordered by our beautiful mountains on either side.

Afterward, we decided to have lunch in Bryson City before heading back to Waynesville. As we were looking for a lunch place, we spotted a tiny bookstore on the main drag. Jonathan, a 15-year-old student of baseball, was looking for something to read on his flight home. We popped in and noticed it was a used bookstore. Jonathan asked for the sports section and we were led to a shelf with just a handful of books. The woman helping us apologized and explained they don’t get many donated books on sports. But Jonathan quickly grabbed Nolan Ryan’s autobiography, “Miracle Man.”

Then I saw it. The book I received as a Christmas gift in 1977. It was almost in mint condition. Jim Fixx’s classic “The Complete Book of Running.” I opened the cover and the penciled in price was $2. The iconic book jacket with the authors own muscled runner’s legs and sockless feet in Asics racing flats had the original listed price as $10. As I opened it up, I noticed a business card size State Farm Insurance 1982 calendar, used for a page marker. Like a good neighbor it was still there.

When I read this book in the late ‘70s it was the bible of running. There was little else for most of us to refer to. Everything was trial and error when the jogging and running boom was just getting started. Looking at the chapters it’s obvious why this book was so appealing: Feeling Better Physically, What Happens to Your Mind, Getting Thin, The Longevity Factor to name a few. He hoped to sell 10,000 books. It became a New York Times bestseller and sold over one million copies.

I scanned around the book one afternoon later and noticed not that much has changed. He has a detailed index so I looked for trail running and found nothing. But I did find mention of the Tarahumara Indian runners in Mexico. These runners became famous in the book “Born to Run” by Christopher McDougal. They are his only mention of trail or ultra-runners. The originals.

His chapter on nutrition is interesting. He spends a few pages on vegetarian runners and how to balance running and their protein intake. He discusses the psychological benefits of running and how it can help a person cope better with pressure and tension. He addresses the challenges of fitting running into the schedule of a busy person’s life and how to start running if you’re over 40.

He has one chapter featuring Bill Rogers, the five-time Boston Marathon champion. It was written the year after his first win in 1975 in a then course record of 2:09:55. During that race, Rogers stopped four times. Once to tie his shoe lace and three times to stop and drink water. He also ran in a regular T-shirt. The time he ran in 1975 was faster than three men’s winners since 2012. Maybe runners don’t improve that much with technology.

But you may know a very sad thing happened. Jim Fixx died of a heart attack at age 52 in 1984 while out on a solitary run. There was the expected backlash from non-runners who wanted to connect his death with running. The truth was simply he was predisposed to heart disease. He was not following his labs or maintaining regular doctor visits as everyone, even dedicated runners and all athletes, should do. High cholesterol, high blood pressure and other problems can affect anyone, even dedicated runners.

It happened to me, too. I thought my diet and running would make me non-susceptible to the maladies of aging. I’d been running since 1974 and a vegetarian since 1987. But a doctor noticed I had a heart murmur in 2007. Eventually I had a valve repair, then a stroke, pacemaker, and seizures. I attribute my rapid recovery from a stroke to a long-time lifestyle of running and being a vegetarian. (Plus, and especially because, Kathie recognized the stroke immediately.)

Running is a wonderful exercise, but know that it is just one part of a complete healthy lifestyle.

Patrick Johnson, RN, BSN, MPA is the former public health director in Haywood County, N.C. He worked in public health for 36 years in Florida and North Carolina. He retired from the U.S. Air Force Reserve Nurse Corps in 2013 as a colonel after 27 years. Col. Johnson is an Iraq war veteran and has run over 400 races from 5k to marathon. He’s been a vegetarian for 35 years. He’s also bounced back from a heart valve repair, a severe stroke, seizure disorder and still battles atrial fibrillation and retirement. He continues to hike, lift weights, stretch, meditate and run, but much slower these days.